How they will manage all this?
Click to expand...

God not that crap. It's literally a sitting duck getting picked out one by one in the middle east

Knowitall said:
Ajay devgan should be deployed near galwan valley for first hand experience if he is so interested.

These bollywood guys are trying to cash on the nationalist factor which is emerging everywhere in India now. fuckers used to do ashamed to be Hindu chutiyapa when it benefited them.

We Indians shouldn't act like gajani forgetting everything so soon.

It was Alia's father who called 26-11 RSS ki shazis. These guys need to be shown their place.
Click to expand...

AD is different from normal Bollytards. He has given us beautiful movies without the normal dance sequence. As an actor he is superb though Bolly lacks writers and directors with right vision. Specially since they are reluctant to pay writers like Hollywood does or other industries are doing.

In such case most of the movies turned up disaster URI was a disappointment too but much better than rest of bolly flicks Ghazi was amazing movie Paltan a good movie destroyed by romantic flashbacks but still good.

In any case if Bollywood is making movie and inspiring youth it's good.

What I don't like is the timing of this announcement it's stupid.

johnq said:
Brahmos lower range is at sea level because the air is denser at sea level, hence more drag. Because Ladakh is at a much higher altitude both the range and the speed of the missile will be much greater than at sea level, even in terrain-following mode. This, combined with the himalayan terrain which can be used to mask its approach from radar means that it's a nightmare for S-400 or any other SAM system.
Click to expand...

It works both ways. Missile has to navigate through terrain as well and high speed of missile is not suitable for course correction.

Brahmos in Ladakh is NO.

I do not think turkey can produce a genuine 5th gen aircraft on its own it is nearly impossible.it is not a frame of making of a model ,look at India after almost 3 decades our Tejas got gov ,and still require some refinements which will be executed in mk1a ,turkey at best have the support structure of the f16 that does not mean you can make it from scratch India have the experience of decades in manufacturing jet fighters ,also engines .after so much efforts we are now gaining speed but still lack many facilities .how can a nation which not produced its 3rd or 4th gen plane can make 5th gen plane from scratch ,where is r&d ,where is support structure,and most important money these projects have huge cost, even India which is a much bigger economy finding it difficult to build amca .i think only USA,Russia,uk,Japan,China,India,France,Israel,sooth Korea,Germany and Sweden has the resorces and know how to build a proper fighter aircraft .

we might have a piece here and there as part of some museum. even if we have it in storage, then it safe to assume that they are not air worthy and probably the pilots have moved on to other fighters.
Click to expand...

The last MiG-27 squadron was retired as recently as late December 2019. So there are plenty of airworthy planes that probably just need some maintenance.

If they can cannibalize parts to put together at least 10 airframes, it would have a significant impact on our ground-attack equation.
L

Sridhar_TN said:
Question to anyone with knowledge on the subject:
Brahmos. How accurate is this platform? Real talk, no jingoistic optimism.

Can this be used for taking out S400 radar systems across the border. I know this is a costly platform and will be used only for precision strikes, but how will this platform perform in mountainous terrain. Does it have a dive down capability?
Click to expand...

Publicly available information states the missile has a CEP of 1 meter. We do not know if the missile has been designed with an Anti Radiation Homing Receiver as part of it's sensor package. If it has, that makes it a true anti radiation missile able to pick up radar emissions from the S400 radar. Otherwise it has to rely only on the target coordinates of the S400 system location fed in prior to launch and those coordinates will be from either satellite or aerial reconnaissance. But the S400 system is mobile and can be moved around so whether the Brahmos hits the S400 will also depend on how recent the reconnaissance coordinates are and whether the S400 radar and launchers have been moved since then. As far as the dive aspect is concerned, logically cruise missiles that fly lo-lo, pop up near the target area to do DSMAC (Digital Scene Mapping Area Corelation) i.e. the popping up allows the camera in the missile to get a bird's eye view of the target area and that view is then compared to the target image in it's memory so that it "recognizes" the target and therefore hits the right target. I do not know if Brahmos has DSMAC. In the case of Brahmos the deep dive could also be a tactical maneuver to give the target little time to take evasive action. So in theory yes, the Brahmos should be able to target the S400 radar even if it does not have an ARH Receiver but it will take some hands on satellite reconnaissance or ground intelligence.

Rocket artillery is more effective in open and flat areas and less in mountains.

CAS not a good idea. I think India must be buying what it needs already.
Click to expand...

l
CAS is the only god idea because it is much accurate than unobserved rocket or missile fires.

That is right. ATK missiles by bunker bursting.

India will also need a lot of anti aircraft guns to shoot drones and small helicopters.
Click to expand...

Singer or Igla type of MANPADS rather than guns.

The mountains are army area primarily.
Click to expand...

Look how even IN has reached there.

The tactics has to take into account what weapons enemy has.

Blindly using air power will result in high losses. We already have bottlenecks in aircraft procurement.

India can use a lot of suicide drones. This area should be focus.
Click to expand...

utubekhiladi said:
probably some rumor mills. i have friends in IAF, they have told me once a fighter type is retired from service then all planes of that type is melted to the core, including any left over parts.. occasionally a dozen or so planes after being gutted will enter some museum as show display.

even the manufacturer of 27's have stopped production line and 27's has been retired globally. there is no way you can order spares for 27 and no way mig 27 is coming back to life..

if we do have any in storage, then probably they are not air-worthy

Also, not to mention that.. we retire jets when we are no longer able to maintain the air worthiness due to oldage, lack of parts and service available.. or else we would have upgraded them like jags to serve another decade.
Click to expand...

Not entirely true. In an ideal scenario perhaps but those fighter jets who are inside storage are kept in semi active state depends on various factor though. For e.g. Mig Bis are semi active even those retired ones.

Regarding Mig 27 I am not sure but i dont think spare parts are ordered for them at best cannibalization may happen if they are really needed. Though I doubt IAF is considering them.

tarunraju said:
The last MiG-27 squadron was retired as recently as late December 2019. So there are plenty of airworthy planes that probably just need some maintenance.

If they can cannibalize parts to put together at least 10 airframes, it would have a significant impact on our ground-attack equation.
Click to expand...

Most of these Mig-27 may be in storage. But this fighter may not have much impact in Ladakh. It is basically for plains where it flies low and can attack tanks and vehicles.

I think CAS is difficult in Ladakh though many people here are calling for it. There is no point in losing a lot of aircraft and men. If you want suicidal missions then drones are better.

India needs drones in numbers - in thousands. How India gets there remains to be seen.

garg_bharat said:
India needs drones in numbers - in thousands. How India gets there remains to be seen.
Click to expand...

How difficult is it to arm these drones,
I think many of them would be very small but there would be some medium sized and big ones.

Can these be armed at short notice and mass produced?

garg_bharat said:
Most of these Mig-27 may be in storage. But this fighter may not have much impact in Ladakh. It is basically for plains where it flies low and can attack tanks and vehicles.

I think CAS is difficult in Ladakh though many people here are calling for it. There is no point in losing a lot of aircraft and men. If you want suicidal missions then drones are better.
Click to expand...

Why are you so much against CAS or use of airforce. There are plain looking valleys in Ladakh like Depsang, Spangur, Demchok and depth ares in Tibet once you cross Karakash ranges. Do remain stuck up with Galwan or Hot springs.

Have you forgotten the splendid role IAF played in Kargil. I only wish IAF / IA had 40 more Apaches... I am in mood of using even the navel air assets and fix wing assets like Pilatus and dorniers to fill Galwan valley with the shit.. 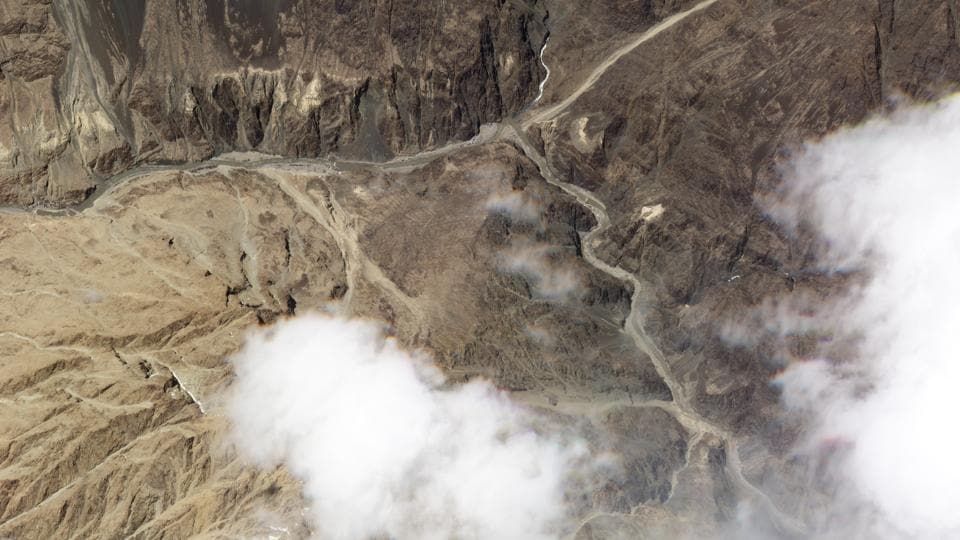 Military commander said it would be tough for China to hold on to current PLA positions in Galwan, Gogra, Hot Springs and Pangong Tso.

LDev said:
The Indian political establishment looks united in it's view that this confrontation is a watershed event in India China relations. This is ex Foreign Secretary Nirupama Rao.

Rogue nation has a habit of miscalculations. One pakistani general had planned morning breakfast in Jodhpur, lunch in Jesalmer and dinner in Delhi but their battalion got wiped out in 24 hours. The problem with idiots like Chines and Pakistanis is that they fail to calculate response. That is why they are f***ed up nations curse on humanity.

Bhadra said:
What I wanted our SF to do the Nature seems to be doing That

Military commander said it would be tough for China to hold on to current PLA positions in Galwan, Gogra, Hot Springs and Pangong Tso.

* The PP14 position and Chinese deployement on river bead will also become untanable. So also some Indian positions down the river.

* If not. attacking PP14 will also become difficult due to swollen river... it will virtually become opposed River crossing operation. I doubt the fast current of this mountain swollen river would even allow that..