The India Meteorological Department (IMD) has upgraded its Monday alert for Mumbai, Thane and Palghar from green to orange (heavy to very heavy rain at isolated places). For Raigad, a red alert (extremely heavy rain at isolated places) has been issued as cyclonic storm Tauktae, which was 320km south-southwest of Mumbai on Sunday moving towards Gujarat, has been forecast to intensify and pass 120km off the Mumbai coast on Monday. The state disaster management cell said that over 6,500 residents from the coastal districts of Ratnagiri (3,896), Sindhudurg (144) and Raigad (2,500) have been shifted to safer places. Considering the warning about Tauktae, the BMC has cancelled the Covid vaccination drive for Monday across all public centres. The BMC has also warned people against going near the sea.

12:02 (IST) May 17
Chief minister Pramod Sawant on Monday said that Union home minister Amit Shah has assured full support of all central agencies to Goa for returning to normalcy after being impacted by Tauktae cyclone. 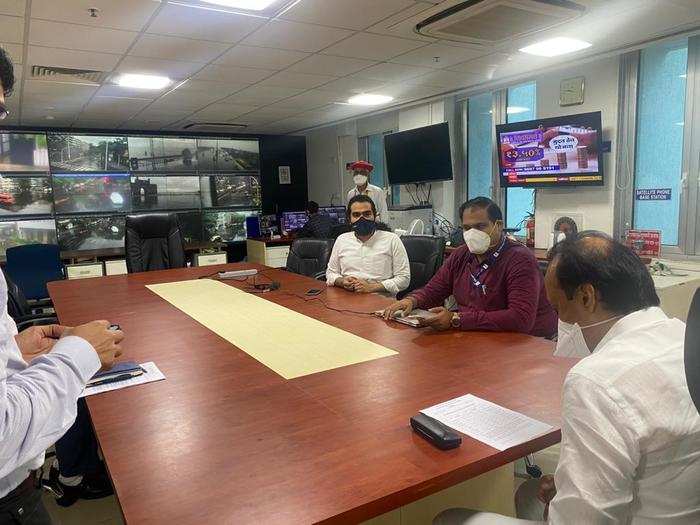 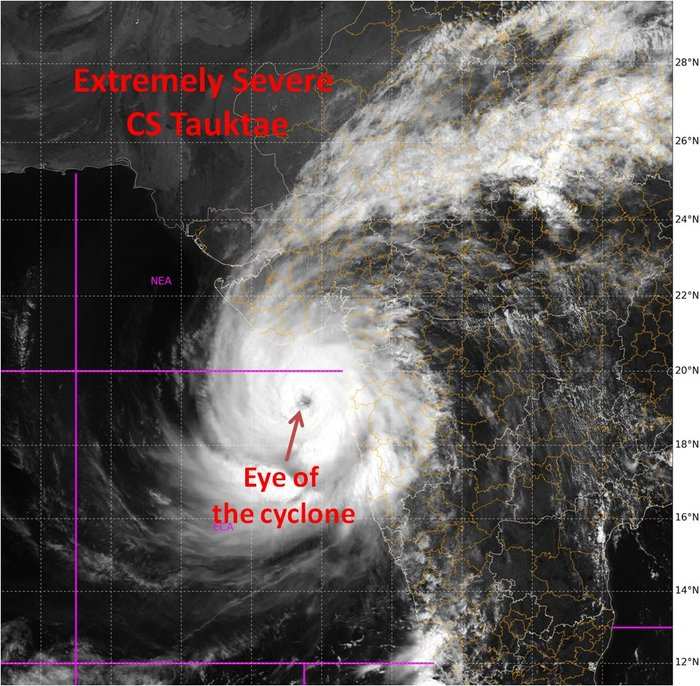 11:06 (IST) May 17
IMD update on Cyclone Tauktae
At 10.30am, the very severe cyclonic storm Tauktae lies centred in east-central Arabian Sea, 160km west-southwest of Mumbai and 290km south-southeast of Veraval coast. It's moving northward at the speed of 20 kmph

10:43 (IST) May 17
Maharashtra: 536 instances of structural damages (house collapse, roof collapse, pole uprooting) reported in Sindhudurg, 61 in Ratnagiri and 2 each in Raigad and Thane districts till last night, due to cyclone Taukate. (ANI) 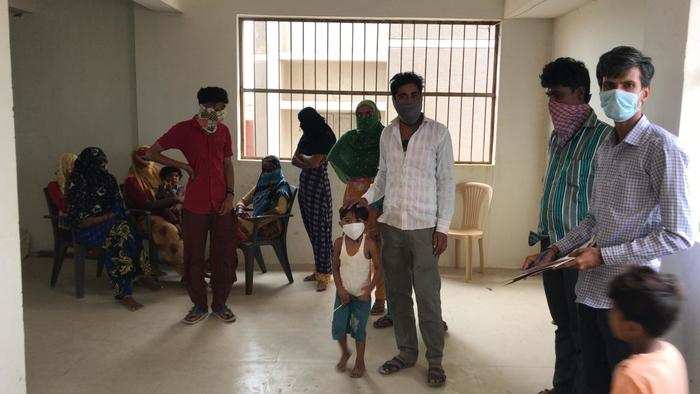 10:00 (IST) May 17
Mumbai Monorail will not operate today due to cyclone alert.

09:59 (IST) May 17
Mumbai airport closed for three hours
Mumbai airport will remain closed from 11am to 2pm (local time) due to cyclone alert, announced a Mumbai International Airport Ltd spokesperson. No flights will land or take off during these hours.
READ FULL STORY

09:30 (IST) May 17
Rain causes heavy inflow to dams in west, south TN
Several districts in western and southern Tamil Nadu received moderate to heavy rainfall triggered by Cyclone Tauktae on Sunday resulting in heavy inflow to major dams. Coimbatore and Tirupur experienced continuous showers ranging from mild to severe for the whole day. In the south, Theni received heavy showers while Kanyakumari had a wet day. Nilgiris was pounded by heavy rain throughout the night on Saturday with the showers continuing on Sunday too.

08:51 (IST) May 17
Cyclone Tauktae to reach Gujarat coast this evening and cross the state between Porbandar and Mahuva (Bhavnagar district) during 8-11pm tonight with a maximum sustained wind speed 155-165 kmph gusting to 185 kmph.


08:37 (IST) May 17
Gujarat: Fishing boats in Navsari float on the seashore in the wake of Cyclone Tauktae. Picture from Ojal Machhiwad village. 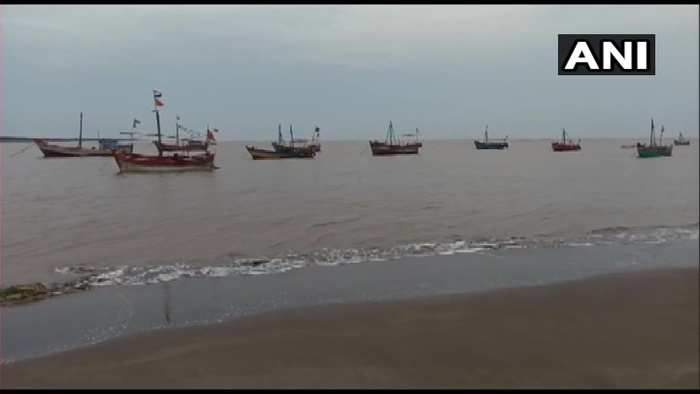 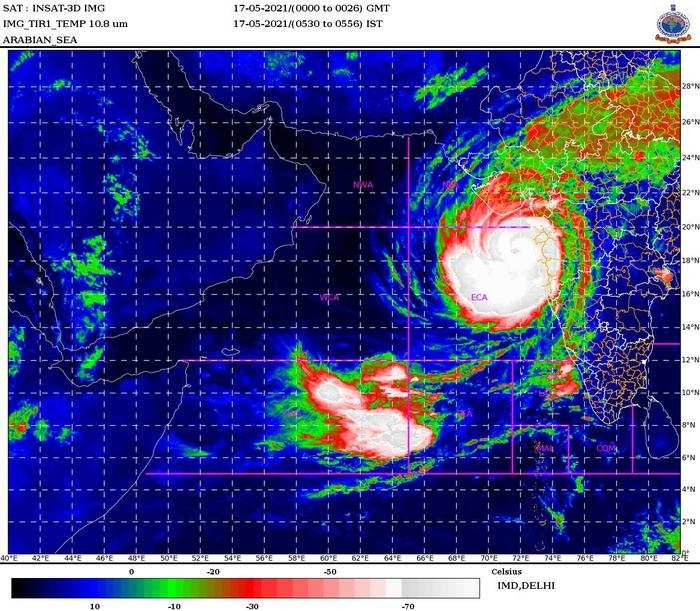 The cyclonic storm 'Tauktae' has further intensified into an Extremely Severe Cyclonic Storm (ESCS) at 000 UTC and lay centered at 18.5N/71.5E, with a ragged eye: IMD

08:10 (IST) May 17
IAF deploys aircraft for mobilisation of NDRF teams from Kolkata to Ahmedabad 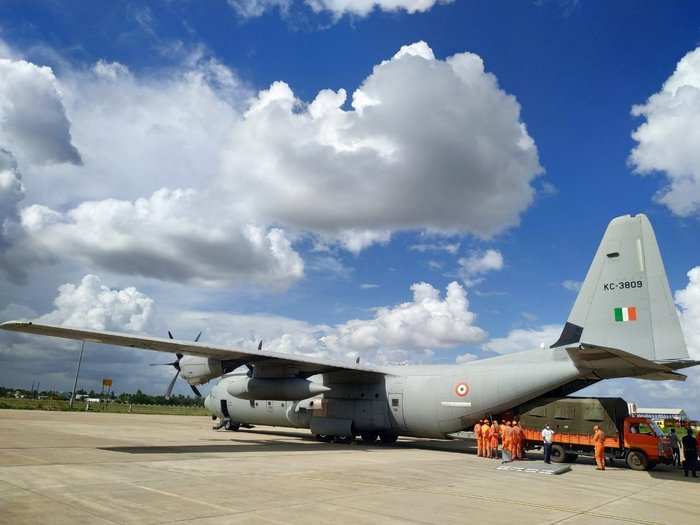 Indian Air Force (IAF) had deployed two C-130J and a An-32 aircraft for transportation of 167 personnel and 16.5 tonnes of load of NDRF from Kolkata to Ahmedabad: IAF


07:55 (IST) May 17
Light spell of rain and gusty winds seen in in view of Cyclone Tauktae; early morning pictures from Wadala area of Mumbai. (ANI) 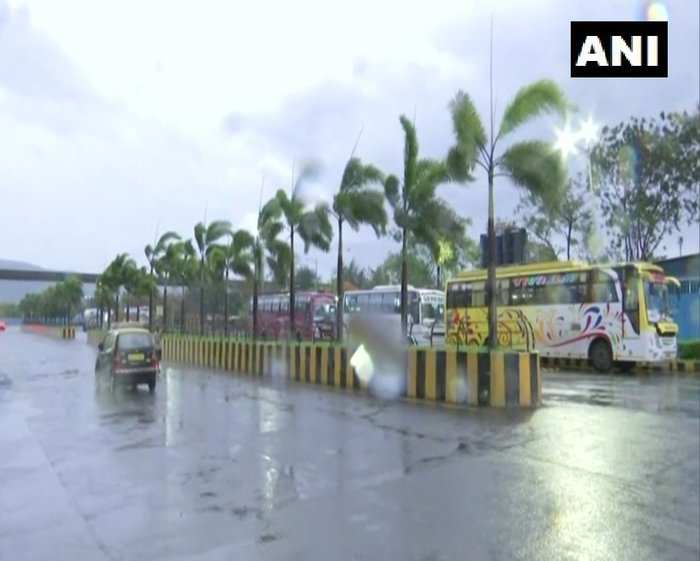 07:55 (IST) May 17
As per the latest Satellite observation at 5.30am today, the Vortex Tauktae has further intensified and now lay centered at 18.5N/71.6E with a ragged eye. Convective bands are tightly wrapped.

07:54 (IST) May 17
Cyclone Tauktae surging towards Gujarat, over 1.5 lakh to be evacuated
After being spared by cyclones for two consecutive years, the crashing of very severe cyclonic storm ‘Tauktae’ on Gujarat coast looked imminent with landfall expected to be anywhere between Union territory of Diu and Mahuva in Bhavnagar district on Tuesday early morning.


07:54 (IST) May 17
No need for cyclone panic in Mumbai, expect patchy rainfall till noon
The reason for upgrading the cyclone warning for Mumbai and neighbouring areas was owing to expectations that the storm would slow down and thus affect the region instead of bypassing it, Shubhangi Bhute, scientist, IMD Mumbai, said.


07:52 (IST) May 17
CM Uddhav Thacekray briefs Shah on state’s preparedness
Briefing Amit Shah about Maharashtra’s preparedness at a review meeting the Union home minister held with states in the path of the cyclone, CM Uddhav Thackeray said coastal districts have been alerted and steps taken to ensure power and medical oxygen supply to hospitals in these areas are not disrupted.


07:52 (IST) May 17
Temporary shelters put up in Mumbai; Navy on standby
The IMD has issued an orange alert for Mumbai warning of very heavy rains at isolated places with strong winds on Monday as the very severe cyclonic storm Tauktae is likely to pass close from the Mumbai coast towards Gujarat.

Good I'm inland and not actually on the coast wew.

The IMD has stated that Cyclone Tauktae is likely to intensify into a very severe cyclonic storm within the next 24 hours and that it will cross the western coast of Gujarat on early morning of May 18
11:57 IST, May 17th 2021
Cyclone Tauktae Live Updates: Gujarat Cabinet Minister Kunvarjibhai Bavaliya takes stock of preparedness

With the approach of the impending Cyclone Tauktae, Chhatrapati Shivaji Maharaj International Airport (CSMIA) has closed all flight operations from 1100-1400 hrs of 17th May 2021 as a precaution. The airport has so far witnessed 3 diversions:

Goa Chief Minister Pramod Sawant spoke to Home Minister Amit Shah regarding the devastation caused by Cyclone Tauktae. Amit Shah has assured full support of all Central agencies to the state for returning to normalcy. 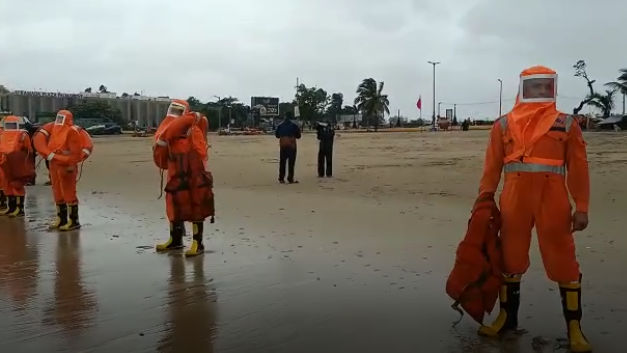 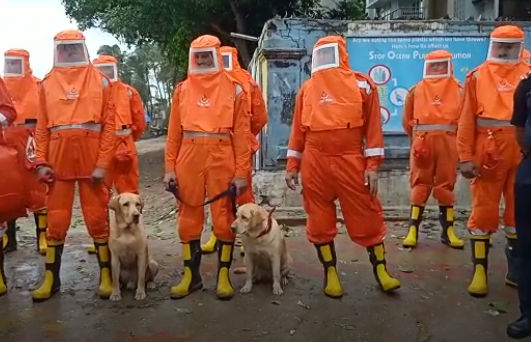 The Bandra-Worli Sea Link has been closed for commute due to Cyclone Tauktae. Authorities have urged commuters to take alternate routes. The sea link will be closed till further update.

According to Meteorological Centre, Ahmedabad, the 'Very severe' cyclonic storm is likely to move north-northwestward & reach Gujarat coast in evening hrs & cross Gujarat coast between Porbandar & Mahuva during night as the storm with maximum sustained wind speed of 155-165 kmph gusting to 185 kmph

As Cyclone Tauktae approaches closer to the Mumbai metropolis, the BMC has urged people to refrain from venturing near the city's coast.

The impact of Cyclone Tauktae was also seen in Rajasthan as two people were killed in a lightning strike in Dungarpur. In addition, the condition of seven people, including 5 from the same family is critical. The storm created havoc in the rural areas and many trees were also burnt due to lightning. Meanwhile, heavy to very heavy rainfall will likely occur at some places in Jodhpur and Udaipur division in Rajasthan on Tuesday as an impact of Cyclone Tauktae. A Met department official said most of the impact of the cyclone will be there in the state on Tuesday and Wednesday, during which rainfall up to 200 mm may occur at isolated places in Udaipur division.
The rainfall triggered by the cyclone will also bring down temperature by four to five degrees. On Monday, moderate to heavy rainfall is likely to occur at some places in Pali, Bhilwara and Udaipur. In Jaipur and Bharatpur divisions, heavy to very heavy rainfall may occur at isolated places on May 19. Meanwhile, Dabok in Udaipur recorded 11 mm rainfall on Sunday, while Pali was recorded as the hottest place with a maximum of 43.4 degrees Celsius. 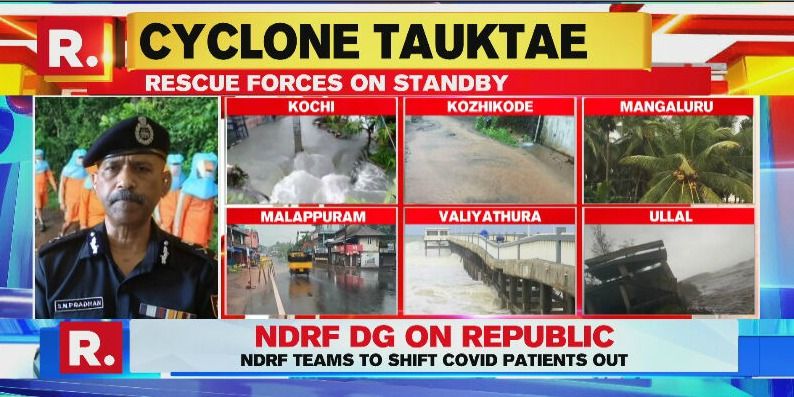 In the view of Cyclone Tauktae, the Indian Air Force (IAF) stepped up its efforts and assisted the NDRF. The IAF had deployed two C-130J and an An-32 aircraft for transportation of 167 personnel and 16.5 tonnes of load of NDRF from Kolkata to Ahmedabad

08:00 IST, May 17th 2021
Cyclone Tauktae Live Updates: As per Skymet, Tauktae will spend more than 12 hours as a storm traveling across Saurashtra before weakening to a depression

"The cyclone would have made rare but double landfall. After making landfall near Porbandar, the storm would have entered the Gulf of Kutch to reemerge for making a second strike close to Gandhidham. All that is history now as the latest model observations suggest landfall Mahuva and Porbandar and to be more precise, close to Diu. A swathe of 100km on either side of the anticipated strike always remains vulnerable." Skymet Weather reported

In the view of Cyclone Tauktae that has further intensified, light spell of rains and gusty winds were seen in Maharashtra. Currently, Mumbai and other adjoining areas are witnessing rainfall.

Gale-force winds, heavy rainfall and high tidal waves swept the coastal belt of Kerala, Karnataka and Goa as Cyclone Tauktae hurtled northwards towards Gujarat on Sunday, leaving six people dead, damaging hundreds of houses, uprooting electricity poles and trees and forcing evacuation in low-lying areas. According to the India Meteorological Department (IMD), Tauktae which has taken the form of a "very severe cyclonic storm" is likely to intensify further during the next 24 hours and reach the Gujarat coast on Monday evening.
Strong winds with speed reaching up to 90 km/per were lashing the western coastal region. According to the Cyclone Warning Division of the IMD, by May 18 the wind speed is expected to increase to 150-160 km per hour, gusting up to 175 km per hour. An estimated 1.5 lakh people are being shifted from low-lying coastal areas in Gujarat while 54 teams of the National Disaster Response Force (NDRF) and State Disaster Response Force (SDRF) have been deployed in the state.
The cyclone, which is the first this year, has added to the woes of the states which are already grappling with the devastating second wave of COVID. The Centre has given a slew of directions to the states to ensure that the health facilities do not suffer and medical supplies are maintained. With the cyclone intensifying, the wind speed along and off Gujarat coasts in Porbandar, Junagadh, Gir Somnath and Amreli districts will reach 150-160 kmph gusting to 175 kmph by Tuesday morning.
The sea conditions will become "very rough to high" along and off the south Gujarat coast from Monday morning, and "very high to phenomenal" from Monday midnight. A tidal wave of about 3 metres, 1-2.5 metres above the astronomical tide, is likely to inundate several coastal areas of the state during the time of the landfall, it said.
Link

shade said:
Good I'm inland and not actually on the coast wew.
Click to expand...

Coastline is within 5km. from my place and mine is one of the first high-rise from the coastline. Visibility is not even 50 meters.

zoom.earth
You must log in or register to reply here.
Similar threads
Super Cyclone Amphan in the subcontinent
Damage as on 27-12-2017 due to Cyclone Ockhi
India to provide assistance to cyclone-ravaged Vanuatu: Narendra Modi
How India went from 15,000 cyclone deaths in 1999 to just 38 last year
Share:
Facebook Twitter Reddit WhatsApp Link