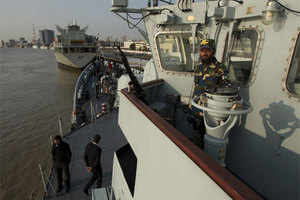 (In pic) A Pakistani navy soldier stands on depot ship NASR, during a visit to a port in Shanghai.
BEIJING: Two Chinese made Pakistani naval ships arrived in Shanghai to participate in a joint naval exercise with China aimed at increasing inter-operability and cohesion between the two navies.

The naval ships Shamsheer and Nasr arrived in Shanghai naval-port yesterday to take part in the joint naval exercises in a bid to boost defence cooperation with the People's Liberation Army Navy.

"It is a very significant exercise which will enhance the inter-operability and cohesion between the two navies," Bilal Abdul Nasir, Commander of Pakistan's 25th Destroyer Squadron told state-run Global Times.

A total of 591 officers and soldiers are on board in the two vessels.

They will stay for six days in Shanghai in eastern China to participate in the bilateral naval exercise.

Nasir said the defence collaboration between China and Pakistan has a strong foundation.

The naval exercises will involve live surface and air gunnery firing on fake targets and special operations by Special Operation Forces teams together with ships, submarine, aircrafts, and helicopters.

The two countries have a lot of cooperation in anti-piracy actions, he said.

The Pakistani Navy is also participating in the Coalition Maritime Campaign Plan and the counter-piracy deployment off the coast of Somalia.

Pakistan has regular deployment of two ships there, which operate there on a rotation basis for two months each.

"Chinese ships are operating independently in the Horn of Africa off the coast of Somalia and the Gulf of Aden. Whenever we come across our Chinese friends, we carry out exercises with them," Nasir said.

The vessels set sail for China from Pakistan on October 23, and docked in Colombo, Male, and Bander Seri before reaching Shanghai.

They will travel to Vietnam after finishing the mission in China.

Both Shamsheer and Nasr were constructed in China.

Pakistan's army, navy and air force use many of the most advanced weapons and sensors developed in China, such as tanks, armoured personal carriers, missiles, guns and fighter aircraft, Nasir said.

paki gonna learn how to turn the ship and run to avoid destruction 1965 navy war with india.

salute said:
paki gonna learn how to turn the ship and run to avoid destruction 1965 navy war with india.

All in vain, their surface fleet becomes underwater whenever a war occurs.