An assault rifle is a rifle designed for combat, with selective fire (capable of shooting in both fully automatic and semi automatic modes). Assault rifles are the standard infantry weapons in most modern armies, having largely superseded or supplemented larger and more powerful battle rifles

INSAS is a family of infantry arms consisting of an assault rifle, a light machine gun and a carbine. It is manufactured by the Indian State Ordnance Factory Board at its Ishapore factory. The Insas Assault Rifle is now the standard infantry weapon of the Indian Armed Forces.

The INSAS rifle is broadly based on the famous Kalashnikov AK-47 action, but with many modifications. The basic gas-operated action (long stroke gas system, rotating bolt, and stamped steel receiver) is of the Kalashnikov pattern. However, the gas system is fitted with a manual gas regulator similar in design to that found on FN FAL rifles as well as a gas cutoff. The charging handle is positioned on the left side of the forearm; it is similar in position and design to German HK G3 rifle. 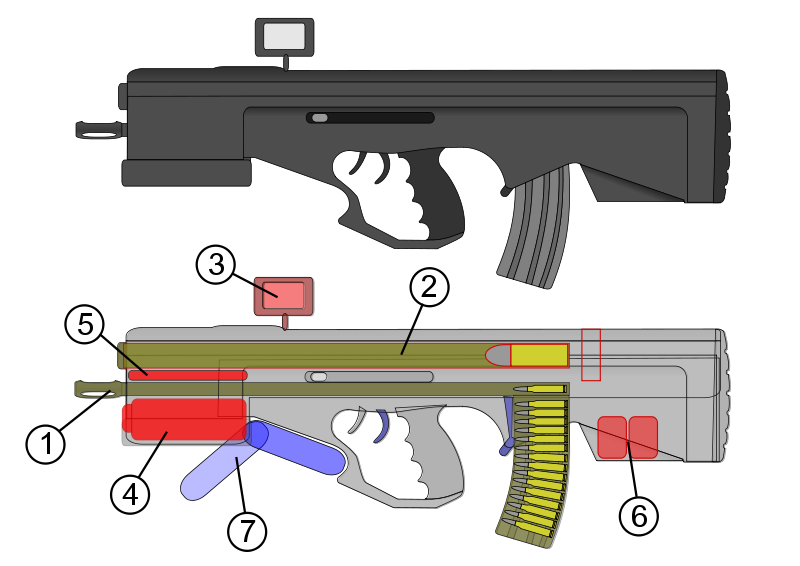 The PAPOP (PolyArme POlyProjectiles, "multi-projectile multi-weapon") is a French project to construct a computerized multi-usage infantry weapon for the FÉLIN system, capable of hitting hidden or protected targets. It combines a 35 mm grenade launcher with a 5.56 NATO assault rifle, both in a bullpup configuration, complete with targeting aids. 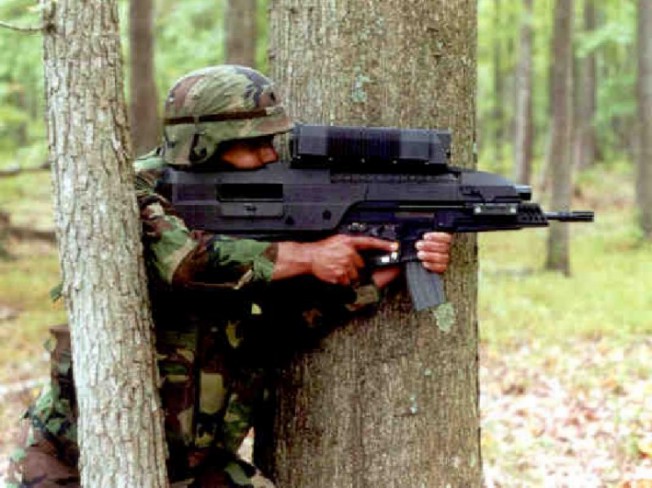 Vikramaditya said:
The PAPOP (PolyArme POlyProjectiles, "multi-projectile multi-weapon") is a French project to construct a computerized multi-usage infantry weapon for the FÉLIN system, capable of hitting hidden or protected targets. It combines a 35 mm grenade launcher with a 5.56 NATO assault rifle, both in a bullpup configuration, complete with targeting aids.
Click to expand...

That french rifle is one ugly ass rifle.
V

I think the last pic is of Canceled US OICW....

these 2 are my personal favorite
V

The AK-47 is a selective fire, gas operated 7.62mm assault rifle developed in the Soviet Union by Mikhail Kalashnikov

The Heckler und Koch G-36 assault rifle had been born as HK-50 project in early 1990s. The reason behind that project was that the Bundeswehr (the German army), after the cancellation of the G11 and G41 projects, was left with outdated G3 rifle and no modern rifle, compatible with the current NATO standards at hands. Therefore the famous company Heckler & Koch was set to develop a new assault rifle for both German army and the export. The new 5.56mm assault rifle has been adopted by the Bundeswehr in the 1995, and in the 1999 the Spain adopted its slightly different, export version, G36E as its standard infantry rifle. The G36 also found its way into the hands of various law enforcement agencies worldwide, including British police and some US police departments. So far I've heard very few complaints about this rifle, and a lot of good revives and opinions. In fact, the only complaints about G36 that I know are the overheating of the handguards during the sustained fire, and the loose of zero of built in scope on some G36KE rifles, used by US police. Some German soldiers also complained about position of dual optical sights and those sights being easily fogged in bad weather (rain or snow). Otherwise it is a good rifle, accurate, reliable, simple in operations and maintenance, and available in a wide variety of versions - from the short-barreled Commando (some even said that it's a submachine gun) G36C and up to a standard G36 rifle. The MG36 squad automatic weapon (light machine gun), which was initially designed as a heavy-barreled version of the G36, was in fact a short-lived proposition that never went into mass production.

The G36, in severely modified form, was used as a "kinetic energy" part of the now-cancelled US XM-29 OICW weapon and it also served as a base for XM8 assault rifle (also cancelled).

Technical description.
From the technical point of view, the G36 is a radical departure from all the previous HK rifles, based on the proven G3 roller-delayed system. The G36 is a conventional gas operated, selective fire rifle, made from most modern materials and using most modern technologies.

The receiver and most of the others external parts of the G36 are made from reinforced polymers, with steel inserts where appropriate. The operating system appears to be a modification of the older American Armalite AR-18 rifle, with short stroke gas piston, located above the barrel, square-shaped bolt carrier and the typical rotating bolt with 7 locking lugs. Of cause, there also are many differences from the AR-18. The bolt carrier rides on a single guide rod, with the return spring around it. The charging handle is attached to the top of the bolt carrier and can be rotated to the left or to the right. When not in use, the charging handle aligns itself with the axis of the weapon under the pressure of its own spring, and reciprocates with the bolt group at the top of the receiver. The gas block is fitted with the self-adjustable gas valve that expels all the used gases forward, away from the shooter. The ejection window is located at the right side of the receiver and features a spent cases deflector to propel the ejected cases away from the face of the left-handed shooter.

All the major parts are assembled on the receiver using the cross- pins, so rifle can be disassembled and reassembled back without any tools.

The typical HK trigger unit is assembled in a separate plastic housing, integral with the pistol grip and the triggerguard. Thanks to this feature, a wide variety of firing mode combinations can be used on any rifle, simply by installing the appropriate trigger unit. Standard options are single shots, full automatic fire, 2 or 3 round bursts in any reasonable combinations. The default version is the single shots + 2 rounds burst + full auto. The ambidextrous fire selector lever also serves as a safety switch.

G36 is fed from the proprietary 30-rounds box magazines, made from translucent plastic. All magazines have special studs on its sides, so two or three magazines can be clipped together for faster reloading. The magazine housings of the G36 are made as a separate parts, so G36 can be easily adjusted to the various magazine interfaces. By the standard, the magazine release catch is located just behind the magazine, in the G3 or AK-47 style, rather than on the side of the magazine housing (M16-style). A 100-round Beta-C dual drum magazines of US origins also can be used (these magazines are standard for the MG36 squad automatic versions of the G36).

The side-folding skeletonized buttstock is standard on all G36 rifles. It folds to the right side and does not interfere with rifle operation when folded.

The standard sighting equipment of the G36 consists of the TWO scopes - one 3.5X telescope sight below, with the second 1X red-dot sight above it. The sights are completely independent, with the former suitable for long range accurate shooting, and the latter suitable for the fast target acquisition at the short ranges. Both sights are built into the plastic carrying handle. The export versions of the G36 are available with the single 1.5X telescope sight, with the emergency open sights molded into the top of the carrying handle. The subcompact G36K Commando version is available with the integral Picatinny-type scope and accessory rail instead of the carrying handle and standard sights.

this is my pic for assualt rifle from south korea,

The K11 dual-caliber air-burst weapon was first shown to public in 2009, during DSEI military expo, although information on its development was available since about 2006. The K11 (XK11 during early development) weapon is being developed under direction of the Agency for Defense Development of the Republic of Korea. The K11 shows more than passing similarity to the ill-fated American XM-29 OICW weapon, but it appears that K11 has better chances to see the service - it is believed that first unit of South Korean army could receive the K11 weapons in 2010. This is not surprising, considering the fact that Republic of Korea is among world's leading countries in the field of design and production of advanced micro-electronics, and also has an established defense industry and strong motivation for constant upgrade of military equipment.
As of now, the K11 dual-caliber air-burst weapon is proposed for infantry squad support role, multiplying soldiers capabilities to engage enemy personnel in defilade and soft-skinned vehicles and equipment, using 20mm air-burst grenades with pre-programmed fuse and 5.56mm ammunition for short- to medium range direct fire.

K11 dual-caliber air-burst weapon consists of three major units, linked into one weapon. Those are 20mm multi-shot grenade launcher (which serves as a bone to the system), the 5.56mm automatic rifle with firing controls, and an electronic fire control unit.
The grenade launcher is a manually operated, bolt action weapon that is fed from detachable box magazines. It is built in bullpup layout, with aluminum alloy receiver and titanium alloy barrel. The trigger system of the grenade launcher is mechanically linked to the trigger / selector / safety unit of the integral rifle component. The rifle component is more or less conventional, gas operated, rotary bolt selective-fire weapon which uses M16-type magazines. Its layout is more or less similar to US-made M16 or Korean-made K2 rifles. The trigger unit is a common part between grenade launcher and rifle components, with single safety / fire selector lever providing fire from grenade launcher (single shots) or rifle (single shots or 3-round bursts). The third component is an electronic fire control unit, which includes laser rangefinder, environmental sensors, ballistic computer, and day (optical) and night (IR) sighting channels. The ballistic computer output is fed to the electronic aiming reticle (providing visible point of aim pre-set for proper range) and to the fuse-programming unit in the grenade launcher, which sets the 20mm grenade to explode at specified range, above or to the side of the target, to provide maximum kill effect from explosive fragmenting warhead. At the present time, two types of 20mm ammunition are specified for K11 grenade launcher - the K167 HE air-burst grenade and K168 TP target practice grenade. Rifle component can use any NATO-standard 5.56mm ammunition.