sayareakd said:
had one, used it for some months, then Covid hit. Withdrawn. Still got access to some free pics.
Click to expand...

How much does it cost per annum?
We can pool together enough money and buy the subscription. Mods can keep hold of the account and releases pics during assesment.

Bhumihar said:
How much does it cost per annum?
We can pool together enough money and buy the subscription. Mods can keep hold of the account and releases pics during assesment.
Click to expand...

What we posted before, now we are getting detail images and it comfirmed what we have seen. People what that time ridicule are shocked, we are not. Some still doing same. Those who understand this know. Next month is very difficult for us. Be ready. Prediction in 2011 here, with time frame. It has come true. How sad. Nirbhay didnt come in thousands. Bhumihar said:
What is the purpose of OSINT exactly?
Click to expand...

So many civvies and retired professionals can quickly analyse "public "images/videos/documents, and point out the Unit/Orbat details, weapons, equipment present in them.

Example:
A school boy filming military convoy on road/rail and posting it on his account
A tender document calling for repairs to some equipment/ production of new eqquipment/ repairs to a military facility
A Gormint twitter handle posting military exercise photos.

Porkis posting Abhinandans pics immediately after capture and then using BR database of serving personnel to find his details. And his presence on a news video during previous Sukhoi days

So we civilians now get a rather real time + indepth view of positions+equipment which was never possible in previous decade. We just connect the dots. Sometimes revealing enemy positions and making possible military scenarios.

Makes stuff difficult for slow moving bureaucracy since public then demand accountability within an hour of news leaking. Their Chai Biscuit + Wine sessions with other(enemy) parties is lessened and stuff cant be kept under iron curtain.

So the cost is based on per image basis?

sayareakd said:
Next month is very difficult for us. Be ready.
Click to expand...

Which one will beat the War drums first India or China.
The way I see it, Chinese are here to capture are strategic Roads.

They have scrapped the Deal for a more advanced version of the same but it's not gonna go into a full production untill a decade. 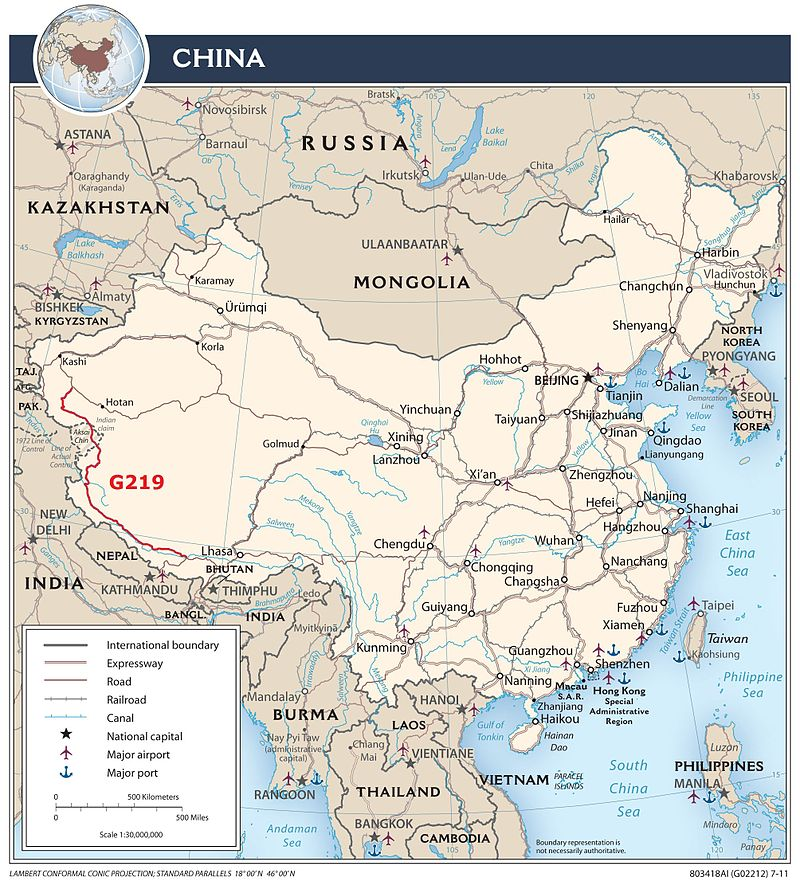 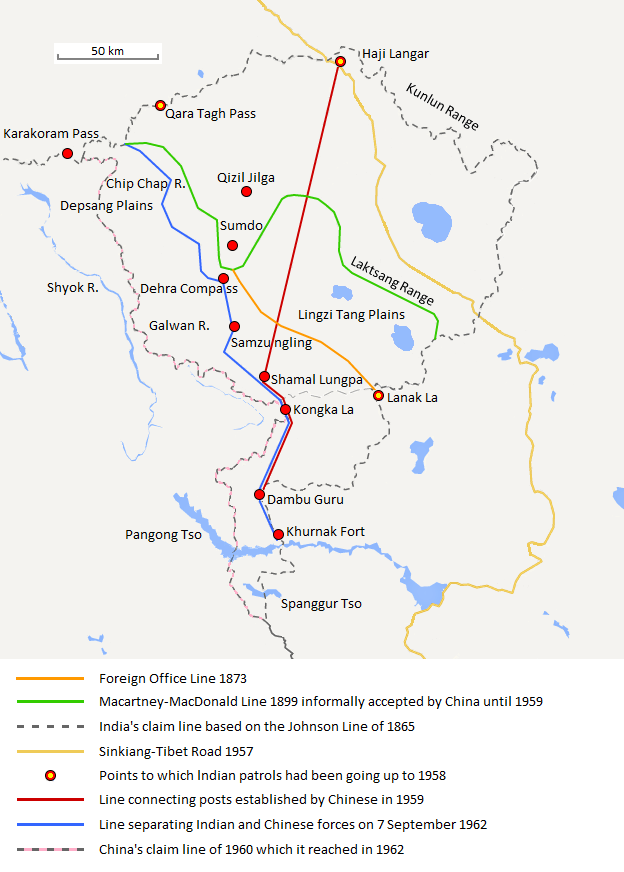 Fellas please list all the chinese airfields in tibet.

Heavy loads = more troops on ground.
Civilian jets will be used to transport them.

scatterStorm said:
Heavy loads = more troops on ground.
Civilian jets will be used to transport them.
Click to expand...

That's why their airfield lengths are more than 3.5kms as high altitude affects the performance and payload carrying capacity of the aircraft.

Akula said:
That's why their airfield lengths are more than 3.5kms as high altitude affects the performance and payload carrying capacity of the aircraft.
Click to expand...

Arunachala is what they seek. Because three airfields of such lengths. It's true what experts say that Glawan is not the fight would take place. They will try to cut DSDBO to AP?.

What Stops Aircraft to take off with Minimum Fuel and Max Payload and Refuel mid air and then Attack.. Probably adds just 15 mins more to Mission time.. That would allow full use of aircraft rather than flow from low alt Airfields and refuel mid air.
T

Walong is sort of located at trijunction of India, China and Myanmar 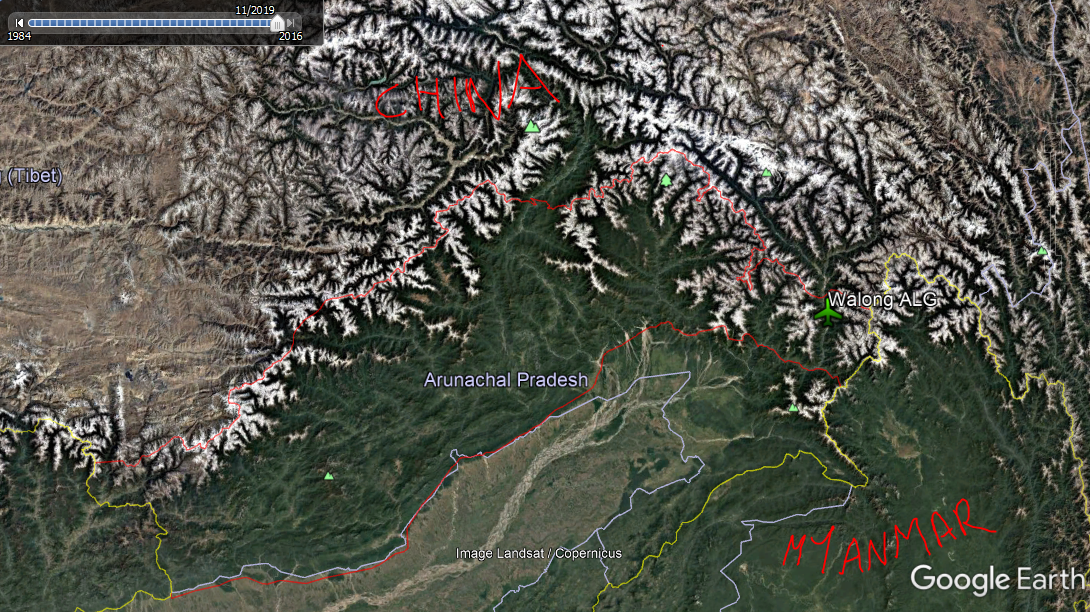 Kibithu located approx 20 kms north of Walong is the easternmost Indian village. It's also the point where River Lohit (one of Brahmaputr's major tributaries enters India from occupied Tibet).
Lohit also known as Chayu or Zhayu river in Chinese. 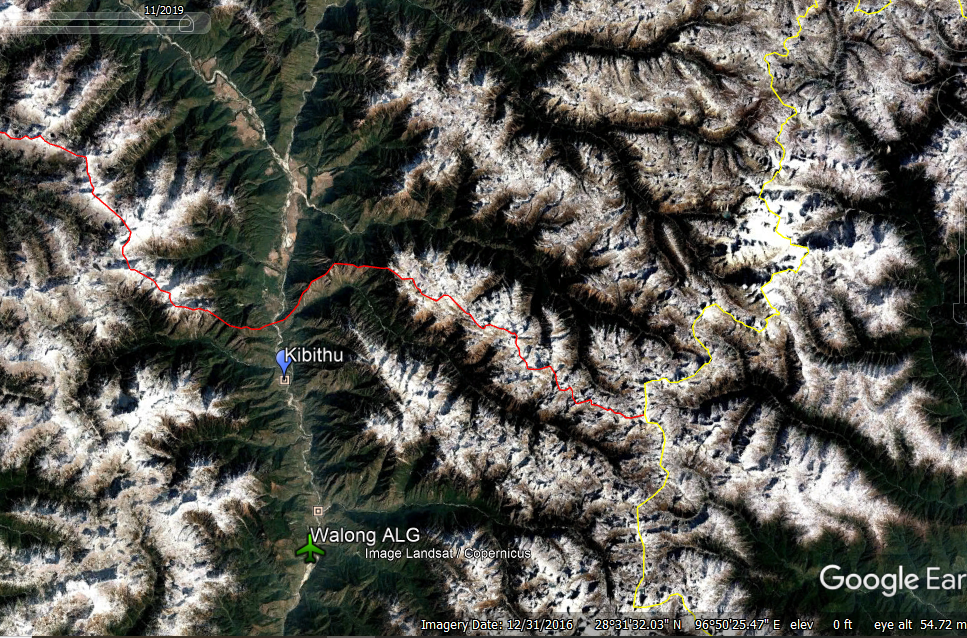 57 years later, ThePrint details how the Indian Army held the Chinese back at Walong for nearly three weeks despite little resources.

Red marker is Chinese Road. The outline of their road is easily visible from far up on google earth showing a wide and good road. It ends probably <50 m away from border or almost touches the border. 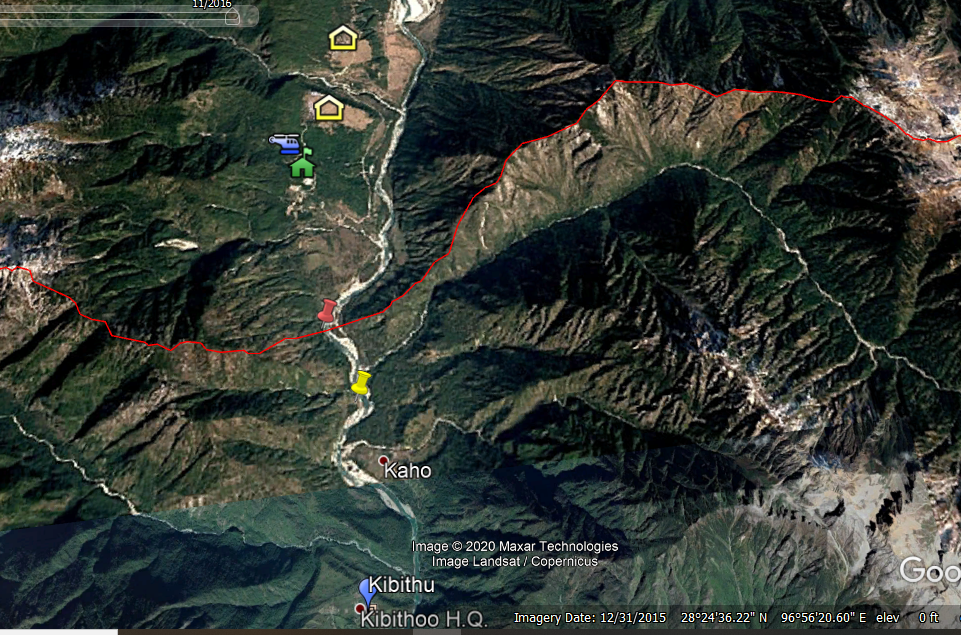 Green House( 28°21'26.48"N 97° 0'37.87"E) seems to be some sort of HQ or meeting point. Constructed in 2012.
Pretty big building whose equivalent is not seen on Indian side. It has sports area and two helipads or large levelled surfaces (both constructed post 2012 along with the building) 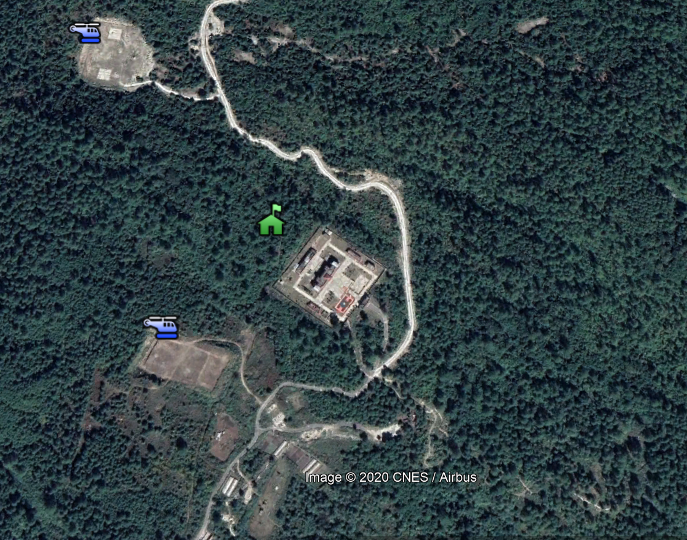 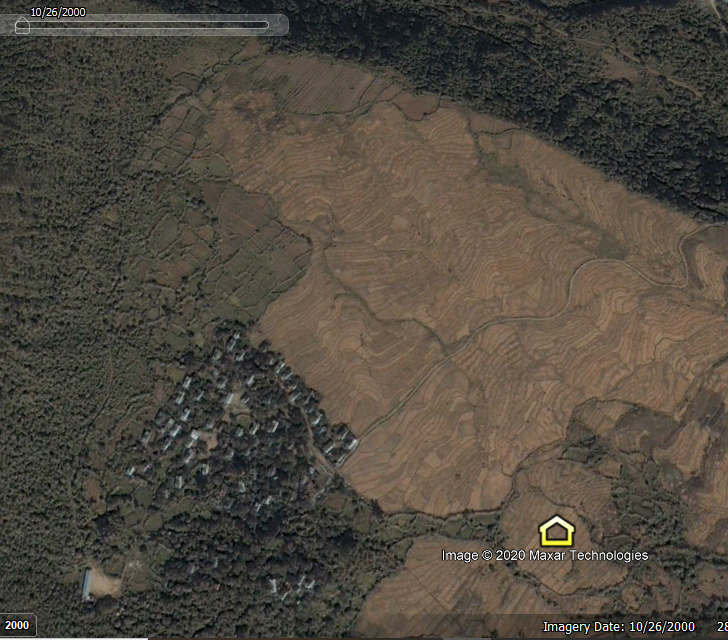 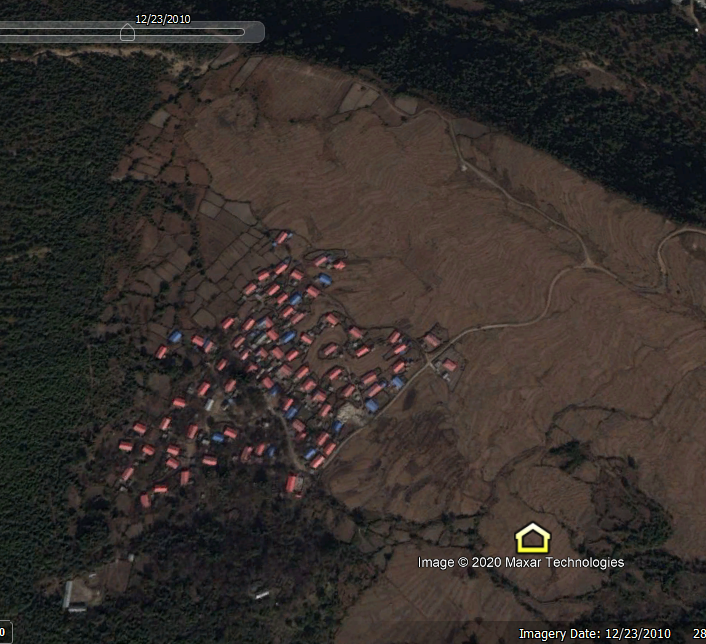 2014 : Housing redone!!! I talked about Chinese practice of symmetrical of imposing architecture of military facilities. Urban "block" like development with parallel roads etc. 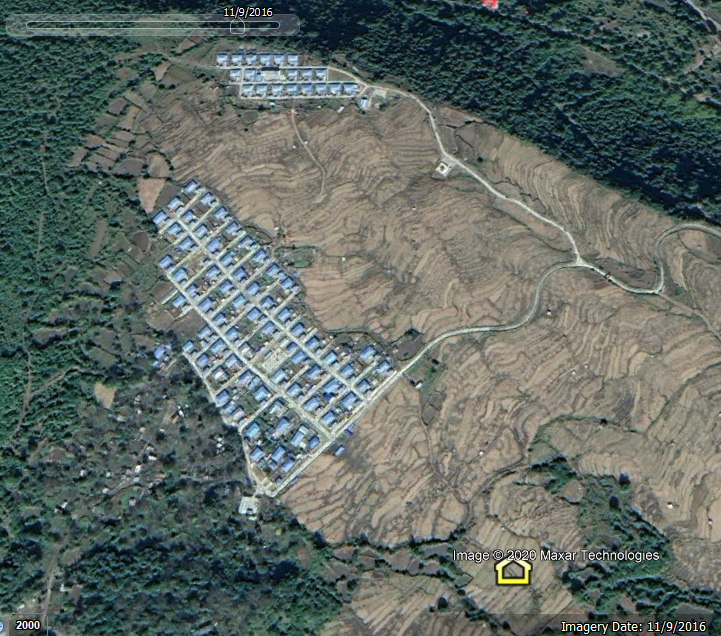 
To be continued
T

The Green Base (28°26'58.56"N 97° 3'51.15"E) looks like Radar or Communication base. Notice two equipment in the square, Could be Air Defence to.
The excellent road quality can be judged from the photo on top left. 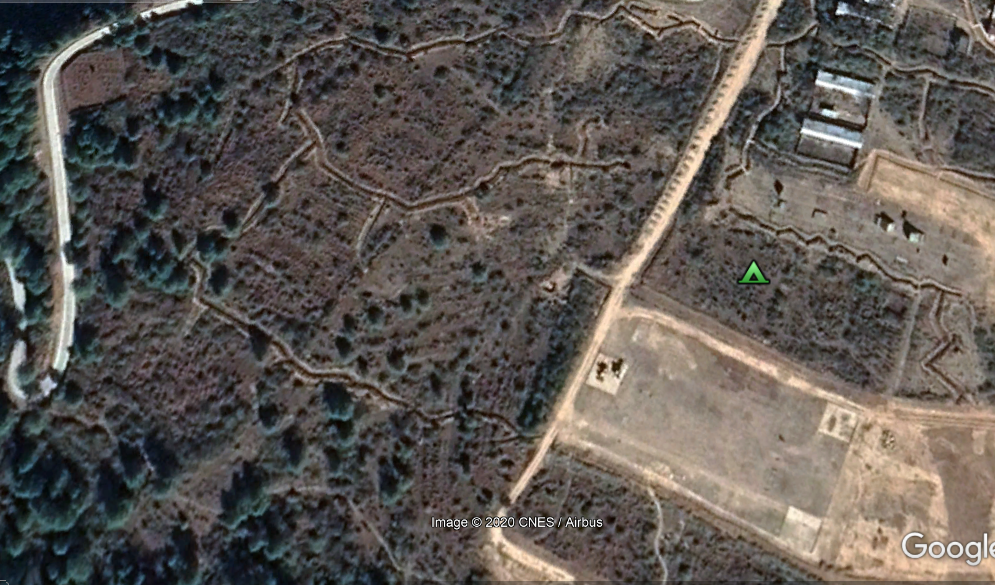 Its an old (WW2 era perhap)airfield, which now probably is only being used by Helicopters. Its primary use is as an EW site.

However recent Satellite Images show thats the runway is being relaid.

P.S.: India should atleast put some pressure on Google to show Arunachal as part of India. Google shows it as disputed, hence border in red line.
Atleast in India , google should be forced to do it, if not worldwide
Click to expand...

So probably this is the reason for the overhaul. Chinooks will be based there

Air Chief Marshal BS Dhanoa: Chinook helicopter can carry out military operations, not only in day but during night too; another unit will be created for the East in Dinjan (Assam). Induction of Chinook will be a game changer the way Rafale is going to be in the fighter fleet.

I am currently trying to draw Chinese Roads at LoaAC and their facilities present.
Is there any way to upload KMZ file so others can also download and contribute.

Some sample stuff.
Pink is Chinese Posts. Green lines are Chinese patrol routes.
Blue is our towns. 'Man on Horse' are mountain passes. With Indian towns, rivers and mountain passes for better analysis.
No military sites of our own forces though for privacy.

Since GE data is old 2012-2016, difficult to track the dirt patrol roads of China. So others with better resources can use this as base, make changes and reupload for poor fellas like us. Tanmay said:
I am currently trying to draw Chinese Roads at LoaAC and their facilities present.
Is there any way to upload KMZ file so others can also download and contribute.

With Indian towns, rivers and mountain passes for better analysis.
No military sites of our own forces though for privacy.

Since GE data is old 2012-2016, difficult to track the dirt patrol roads of China. So others with better resources can use this as base, make changes and reupload for poor fellas like us.

is there an option of showing True north on the images?
i had lost my bearings in a different discussion on LAC thread.
T

ezsasa said:
is there an option of showing True north on the images?
i had lost my bearings in a different discussion on LAC thread.
Click to expand...

All images I post are standard north facing images. Including the two above.

Read them as you will read a normal Indian paper map placed in front of you.

Below orientation with red circle will make it clearer. 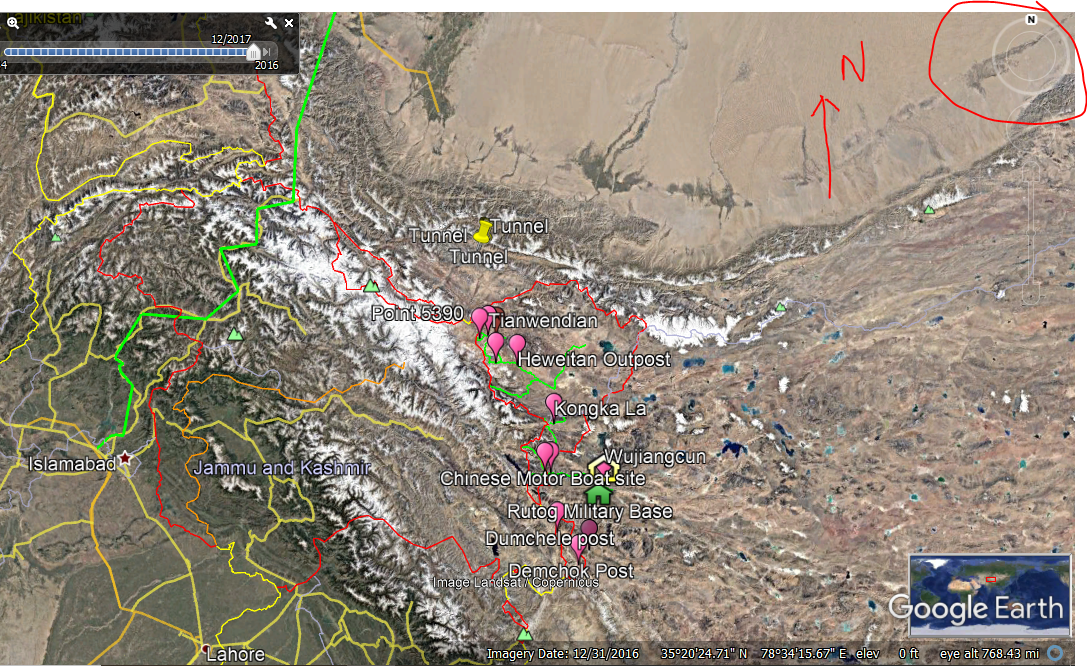 The circled image is Demchok. 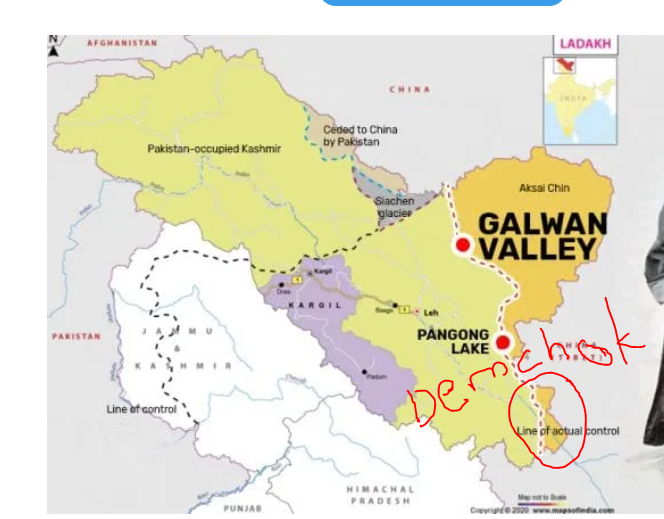 Green Roads are chinese roads. They connect tothe G219 Highway. Shows the extent of Chinese control over Demchok. there are multiple other roads there.

We do have a post at demchok opposite to 'Pink' Chinese Demchok Post (Separated by a river.)

'White' Demchok is our own post. You can see one 'green' Chinese road sort of goes behind our post (still separated by a river) probably to flank it from behind.

Pink 'Dumchele post' is under chinese control and is used for smuggling goods. 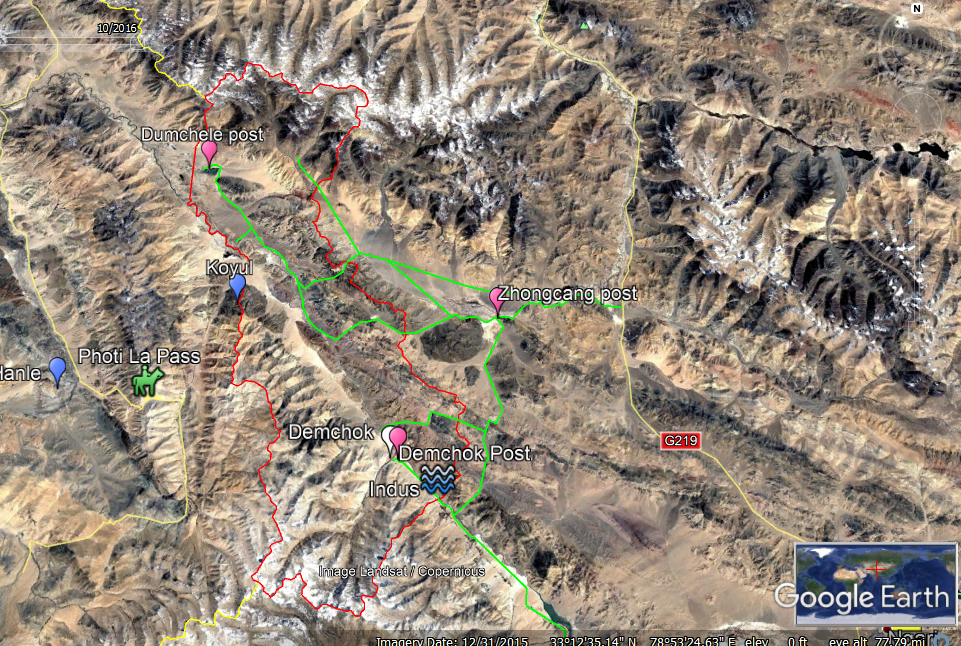 Though since 1962, the border is closed, it does not mean that there are no ‘exchanges’ along the LAC.

Not far from Demchok, a place called Dumchele witnesses a good deal of smuggling between Tibet and Ladakh. Local herders visit the shops in Dumchele, which gets its supplies from a Tibetan mart on the other side of the range; the Chinese goods are later clandestinely brought to Leh. While visiting the bazaar in the capital of Ladakh, if you wonder how .. 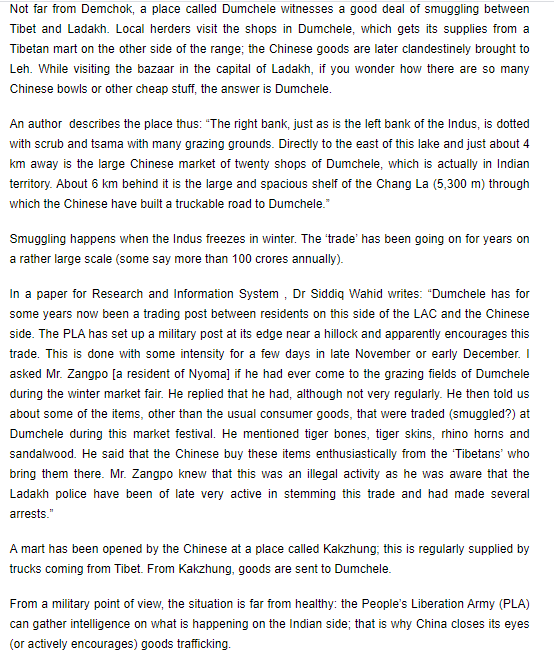 Apologies if this is not the right place to ask: But could someone please post the link for that entire debate as to whether the IAF hit or missed its targets, whether there were hundreds of casualties or none, at Balakot. There is still a vocal section of the anti-BJP group in various forums, who are cocksure that nothing of value was struck, the whole thing was a failure. I just sampled two messages to that effect on theprint.in message board. By 'link' I mean from DFI itself preferably.
B 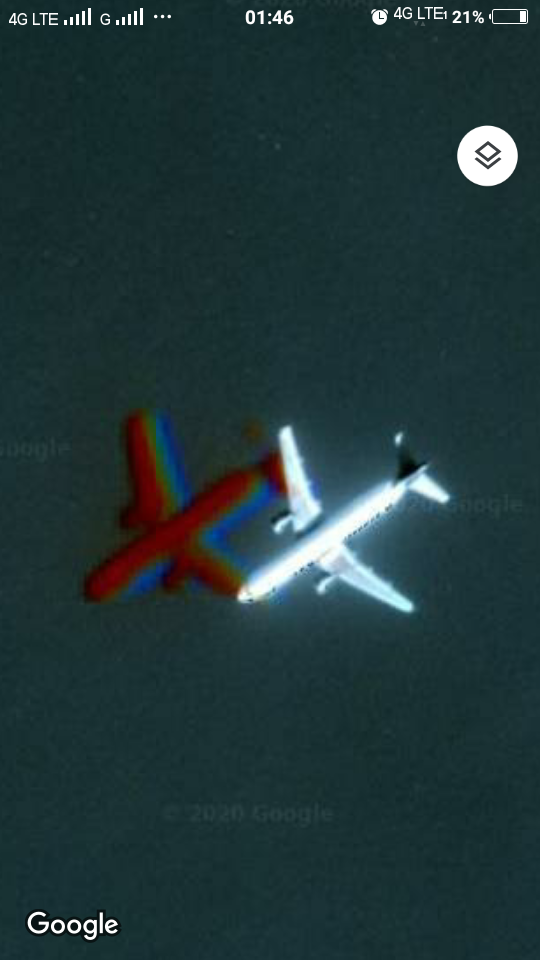 Look!! A f**king big plane and its shadow over BoB. Wonder why would it fly so low when any airport not nearby?! Location can't be disclosed.
You must log in or register to reply here.
Similar threads
OSINT compilation thread
OSINT Community and their India conundrum
Insight into North-East Border Areas & Infrastructure - Youtube, Satellite & Media
ISRO Satellite Launch Opportunity
Share:
Facebook Twitter Reddit WhatsApp Link