Chandragupt Maurya said:
Only one FOC Tejas has been delivered to IAF ?
By this speed they will complete the order in next 100 years
Dassault delivered 5 rafales and the next 5 are about to be delivered they will deliver all the 36 aircraft by 2021
Click to expand...

I remember reading somewhere.. india today i guess .. We already have 10 rafaels...

johnq said:
How many Gs can the Tejas pull with maximum external fuel load, because I was under the impression that it was more than 2 Gs?
Click to expand...

Unknown. But expected to be similar. Fighter jets turn like 747 at MTOW.

Only way you can pull high-G with load is a stall inducing nose-pointing with vectored thrust.

Bleh said:
From the article:
"The target is to produce eight aircrafts by end of this FY..."

As you see, chatter info can be surprisingly accurate if you can filter it well. So, I can't ignore the claims of some modifications.
Let's wait & see if something is announced.
Click to expand...

Regarding modifications. The other day there was news of BNET integrated with MKIs. The pic used was of Tejas. Any connection to 'claims'. HAL was supposed to integrate them with Mk1A. Maybe they integrated with FOC.

To supplement you. @ shaitan posted this on 13th Sept. Just the pic. 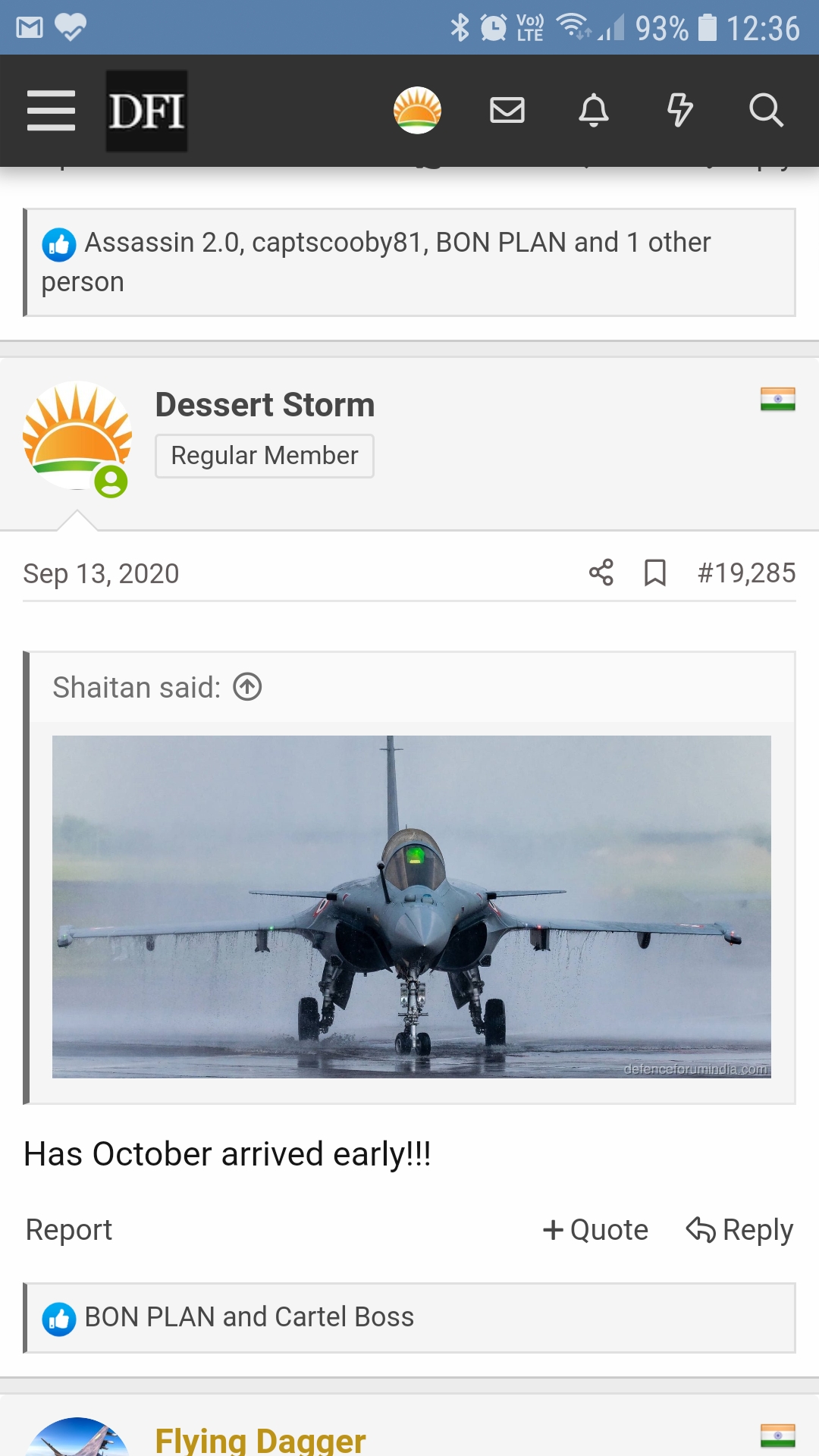 Also note the Tejas in that photo is carrying Python-5.

Bleh said:
Unknown. But expected to be similar. Fighter jets turn like 747 at MTOW.

Only way you can pull high-G with load is a stall inducing nose-pointing with vectored thrust.

As I mentioned earlier there is nothing especial going on, except Covid-19 pandemic, due to which production was delayed

vishnugupt said:
There is no point of holding production of an aircraft which has already approved for Production, just for Gun trials or any trials. All trials will be held on LSP.
The only reason for not flying new Tejas would be, Covid-19 Pandemic. HAL outsources Thousands of parts from tier 2 and tier 3 suppliers which is situated in different parts of county and planet and some parts of country/planet are still under lock down due to different rules made by states. People are avoiding to go offices and also getting salary cuts so HAL is not getting these parts on time. Some countries has declared holidays/work from home till 2021 thats why manufacturing sector is plummeting all over the world
But slowly lock down is easing and things start moving.
We are becoming restless due to China- India face off but others/Private sectors dont share same urgency.
Click to expand...

Every Tejas is coming with some incremental changes

Tejas SP-22 and SP-23 ready for first flight this week
Two fighters from the Tejas Final Operational Clearance (FOC) block—SP-22 and SP-23—are likely to take to the skies in the coming days, signalling the resumption of flight activities that were halted for a while. An official from Hindustan Aeronautics Ltd (HAL) told Onmanorama that the flight trials of these two fighters will be completed by the end of this month.


The low- and high-speed taxi trials of both fighters have been completed. The LCA-Tejas Division of HAL is currently finishing the activities ahead of their first flights. SP-23 is manufactured by HAL’s Aircraft Division.


“The FOC variants getting ready for delivery/flight are loaded with updated software to meet the operational requirements of Indian Air Force (IAF). The production rate has been enhanced at LCA and Aircraft Divisions. Structural works are in advanced stages,” the official told Onmanorama.


HAL hopes that by the end of this production year, the fuselages of the remaining FOC fighters will be loaded on to their respective jigs. An IAF official overseeing the Tejas production activities told Onmanorama that to avoid further delays, HAL has been told to ensure similar build standards for all FOC variants, especially SP-21, SP-22 and SP-23, to start with.


“This would meet our operational and maintenance requirements,” the top official said.


Regional Director, Aeronautical Quality Assurance, is looking into all aspects of the FOC variants, ahead of clearing them for flights.


HAL is working towards delivering the FOC aircraft to IAF without having any pending concessions. The production rate is expected to be enhanced, once the vendors start delivering major assemblies.


“With the lessons from the production of 16 IOC (initial operational clearance) fighters, lots of improvements have been made during the initial build of the FOC structures,” the official said.


SP-21, the first Tejas FOC fighter that flew in March this year, was produced by HAL in a record time of 12 months, post release of the documents.


The aircraft was subsequently delivered to the IAF in May and is currently undergoing software upgrade and post-delivery checks. It is expected to be with its Indian Air Force squadron by the end of this month.


HAL has put in reinforced efforts to meet the demands of IAF with the manufacturing of detailed parts of all FOC fighters almost completed.


“Now, the focus is on the completion of structural build of aircraft, which are planned to be produced during this financial year. The first three aircraft are in advanced stage of delivery and another three (SP-24, SP-25, SP-26) are in various stages of equipping,” the official added.


The COVID-19 lockdown and associated delays have dented the production plans of HAL.


“The pandemic has affected our plans and even hit some of the supply chain logistics. But we never took shelter under these excuses and have provided uninterrupted support to IAF, even during complete lockdown period. We deputed multiple teams to support Tejas fleet and are further improving the serviceability through reducing the turnaround time and ensuring spare stocks in surplus,” the official added.


COVD-19 has impacted the supply chain, slowing down some of the production activities considerably. HAL is now gearing up to meet the financial year targets through innovations such as flexible time approach and dynamically balancing the production lines.


“We are planning to maximise the deliveries despite the lockdown-induced slowdown in supply chain. The target is to produce eight aircraft by end of this FY and this could be enhanced if the supplies from our business partners improve,” the official added.


On the measures being put in place to improve the supply chain management, the official said efforts are on to bring back normalcy. “The foreign supply chain is the worst hit. Since LCA-Tejas Division follows the integrator model, any supply chain disruption will bring in risk for timelines. We are working closely with our partners to tide over the current situation. We are supporting them financially and technically to come out of the current situation. We have given relief to our business partners for the delay caused due to COVID-19-related lockdown,” the official added.


Meanwhile, detailed part manufacturing work is currently under way for manufacturing of eight Tejas FOC trainer aircraft. The jigs are being calibrated for structural assembly and if HAL sticks to the current plan, the first trainer will fly out by end of next year.

patriots said:
So what I learnt that ....sp22 and sp23 will be same as sp21
Which will be easy for maintenance
That's why it took time...
Each ioc so aircraft s were different...if you will see sp 10 has a different canopy ....etc
New additions were added with each ioc aircrafts....but this won't happen with foc aircrafts....
Sp20...sp21 and sp23 will be same
Click to expand...

Well right now, the speed is most important. If they could build SP-21 in 12 months from paper release, maintaining that pace further ahead should be primary target.

I will be happy enough if they can add 3 more before December.....and still now 8/year is achieved.....
May be now aircraft s will be handover in batch

Bleh said:
Well right now, the speed is most important. If they could build SP-21 in 12 months from paper release, maintaining that pace further ahead should be primary target.
Click to expand...

It is matter of the time we will see a paid article which will claim, IAF has put a condition for Tejas mk1a deal that first operationalise gun in Tejas ( FOC ) after that IAF will sign the deal.

So FOC Tejas won't have gun ?


vishnugupt said:
It is matter of the time we will see a paid article which will claim, IAF has put a condition for Tejas mk1a deal that first operationalise gun in Tejas ( FOC ) after that IAF will sign the deal.
Click to expand...

The day when history was created....
4/jan/2001
Nothing is more motivational than this.......
Again @Bleh mark the aerodynamic structural changes from td1 to sp21...

We should focus on the AESA Radars first not only for Tejas but also for Su30mki
once DRDO integrates the UTTAM AESA RADARS into Tejas next step should be developing a Radar for Su30mki
You must log in or register to reply here.
Similar threads
What makes LCA TEJAS stand out
Rise of LCA Tejas Multi Role Fighter Aircraft
LRUs or parts of LCA Tejas Made and designed in India
Tejas MK2 design phase complete ,second Naval Lca Soon : DRDO
Share:
Facebook Twitter Reddit WhatsApp Link