India operates a fairly large and sophisticated fleet of research vessels. A couple are on Indian Navy rolls, while the majority belonging to NIO or NIOT. 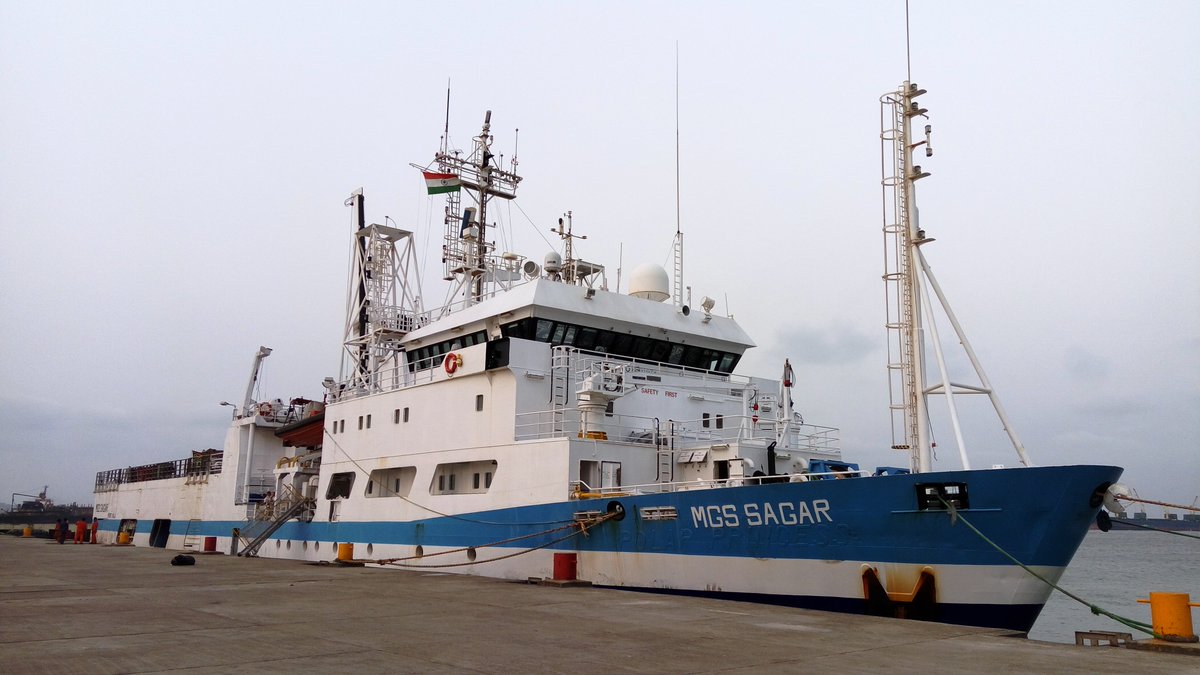 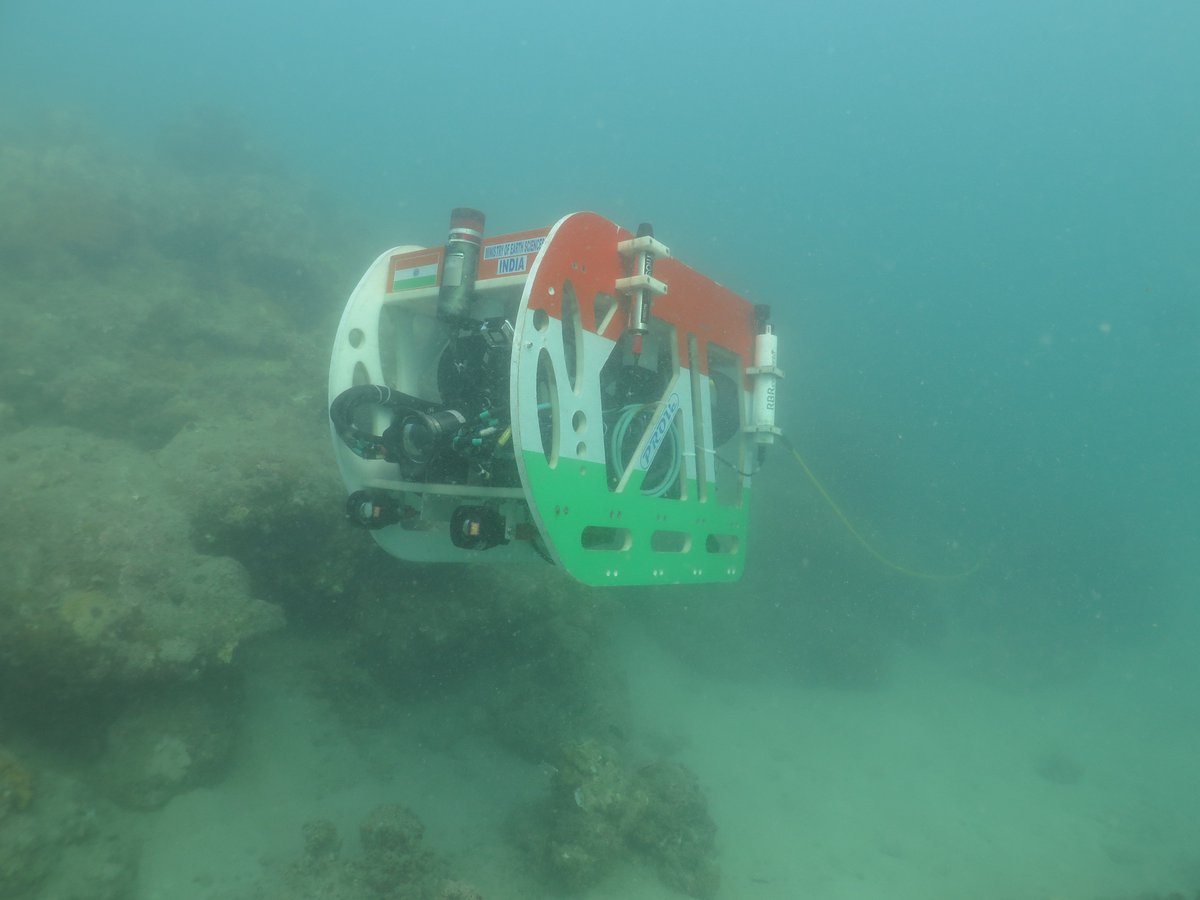 Used to track RLV-TD flight. Surely can be used to spy on enemy ballistic missile tests as well? 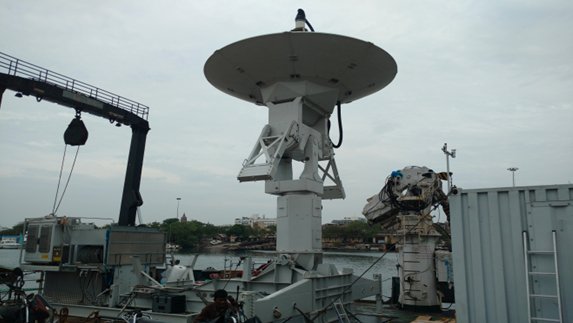 The Indian Coast Guard ship ‘Arush’, the 17th in the series of 20 fast patrol vessels designed and built by Cochin Shipyard Ltd., was commissioned here on Thursday.

The ship was commissioned by the Coast Guard Commander (western seaboard) Additional Director General SPS Basra in the presence of the Commander Coast Guard Region (West) Inspector General K. Natarajan and other senior dignitaries of the central and state governments.

According to the Navy, the 50-metre indigenous FPV has a displacement of 421 tonnes and can achieve a maximum speed of 33 knots with an endurance of 1,500 nautical miles at an economical speed of 13 knots. “It is equipped with state-of-the-art weaponry and advanced communication and navigational equipment which make it an ideal platform for undertaking multifarious close-coast missions such as surveillance, search and rescue and medical evacuation,” a Navy release said.

The special features include an integrated bridge management system and integrated machinery control system, it said.

The ship has been named ICGS ‘Arush’, meaning “first ray of sun”, and will be based at Porbandar under the administrative and operational control of the Commander, Coast Guard Region (NW). “The ship is commanded by Commandant Pramod Pokhriyal and has a complement of four officers and 33 enrolled personnel,” it said.PTI.

Defence Minister Manohar Parrikar on Saturday inaugurated a submarine assembly workshop in Mazagaon. During the occasion, the Defence Minister Parrikar said, "The P75 project might go through strategic partner route."

Earlier in 2014, when Finance Minister Arun Jaitley was holding the portfolio of Defence Minister, had reviewed the progress of the workshop. Jaitley was then accompanied by Chief of Naval Staff Admiral R.K. Dhowan during his visit to the Mazagon Docks Ltd when the Project 75 to construct six state-of-the-art submarines was underway in collaboration with M/s. DCNS, France.

Considered as a crucial project for the country and the Indian Navy, the project will give a massive fillip to India's indigenous submarine construction capability.
F

I believe Russians were building this ship for DRDO.

I believe Russians were building this ship for DRDO.
Click to expand...

This financial year, CSL has delivered seven Fast Patrol Vessels to the Indian Coast Guard and a Buoy Tender Vessel to the Department of Lighthouses and Lightships. The construction of an indigenous aircraft carrier, the largest warship being built in the country, is progressing at the shipyard. The yard is also constructing a barge for NPCC, Abu Dhabi; a Technical Demonstration Vessel for DRDO and two Ro-Ro vessels for the Kochi Corporation.

A bit OT, but interesting one...

One more belonging to DGLL

Sagar Nidhi has been called in for An-32 SAR.

He said that a state of art ice-class research vessel, Sagar Nidhi, of the National Institute of Ocean Technology has been called for from Mauritius.

"That will reach but any deep vessel to operate, it will need specific area.

"Because deep vessels which go inside cannot go and search per se unless you have some definite small area. So last time (Doriner crash), submarine had identified the location and then we had send it (deep sea vessel of Reliance). It is a secondary operation after initial identification," Parrikar said.

Sagar Nidhi comes with Dynamic Positioning System which keeps its position stable, which is required for oceanographic research.

It has a huge deck area for deploying ROV/Manned submersibles/ Tsunami monitoring system.

Gondola arrangement is also made for precision acoustic measurements. Drop Keel facility is made to fit any underwater transducers without dry docking the vessel.

The mega block assembly of the hull blocks of Ship No. 20, the Technology Demonstration Vessel (TDV) being built for the Defence Research and Development Organisation (DRDO), has begun at the Cochin Shipyard, marking a major milestone in the construction of the ship.

S. Christopher, Chairman of DRDO, launched the assembly. The vessel, with a length of 118.4 metres, width of 20 metres, draft of 7.1 metres, and having a steel weight of approximately 3,900 tonnes, was contracted in August 2015.

The vessel will have a rare capability to track the full flight of future long-range naval missile systems. The contract for the construction of the vessel worth Rs.365 crore was signed between the yard and the end-user in August 2015.

The ship would have an array of secret sensors and radars with undisclosed capability to track flight of long-range missiles during test-firing and probably more.

“The DRDO and the Navy are in the forefront of indigenisation of maritime systems and several new naval missiles of varying range are being developed at the moment. Equipped with sensors, the ship will be deployed at sea to track the full flight path of longer range missiles that are under development,” said a top official.

Just as the DRDO is jointly developing the long-range surface-to-air missile (LR-SAM), also called Barak 8, with the Israel Aerospace Industries, naval weapons development in India is set for a huge leap with the ‘K’ series of submarine-launched missiles such as K-15 and K-4.

To be fitted on board the Arihant-class of submarines, the K-15, a.k.a B-05, missile is said to have a range of over 720 km while the bigger K-4s will have an operational range of 3,500 km. Missiles with longer ranges are also being talked about, pointed out a source.

After conquering Deep Space, India is now ready to dive deep in the Ocean

At a time when India has successfully launched its heaviest rocket-GSLV-Mk3- capable of carrying humans to space, work has begun on building a vehicle to take man deep into the ocean.

A team of scientists at ESSO-National Institute of Ocean Technology (NIOT) is ready with a preliminary design for the country's first manned submersible that can accommodate a three-member crew. Expected to be ready in five years at a cost of Rs 500 crore, it will be able to take scientists about six kilometres deep into the ocean to look for precious metals and lesser known life forms.

Once the vehicle is ready, India will join an elite group of nations sending man underwater in a craft. At present, only China, US, Russia, France and Japan have conducted manned deep-sea expeditions.

NIOT director Satheesh Shenoi said the organisation submitted a proposal to the government and was awaiting approval. "Once we get the nod, an expert committee with members from scientific institutions like ISRO, DRDO and IIT will review and fine tune the design," said Shenoi.

According to the design, the craft will be lowered into the sea from a ship. The crew, lying prostrate, in a 3.2 diameter titanium sphere, will be able to perform their task underwater for eight to 10 hours. A robotic arm will help them collect samples from the seafloor while they get a clear view through a glass pane.

At present, India is conducting explorations for polymetallic nodules and polymetallic sulphides in certain regions of Indian Ocean on contract with the International Seabed Authority as part of the Deep Sea Mission launched by the Union ministry.

The submersible is also part of the mission. "It is difficult to remotely operate unmanned vehicles to collect samples from small chimneys venting sulphides deep in the ocean. Manned submersibles will make the exploration less complex," Shenoi said.

But before a bigger mission is executed, scientists are planning to make a similar looking spherical submersible in the next three years and send people about 500 m deep into the Indian Ocean.

The smaller vessel will give scientists confidence and the required experience to get the final model ready. "Bharat Heavy Electricals Limited in Trichy has experience in making stainless steel vessels but not of the dimension we have planned. We are still debating on the material to be used and are looking for companies that can fabricate it here. We may also get from abroad. Once the sphere is ready, we are planning to make other components indigenously," Shenoi said.

Indigenously making a submersible out of titanium — a metal that can withstand high water pressure —is a challenge. "We are in discussions with ISRO too as many aspects of the vessel are similar to a spacecraft," he added.