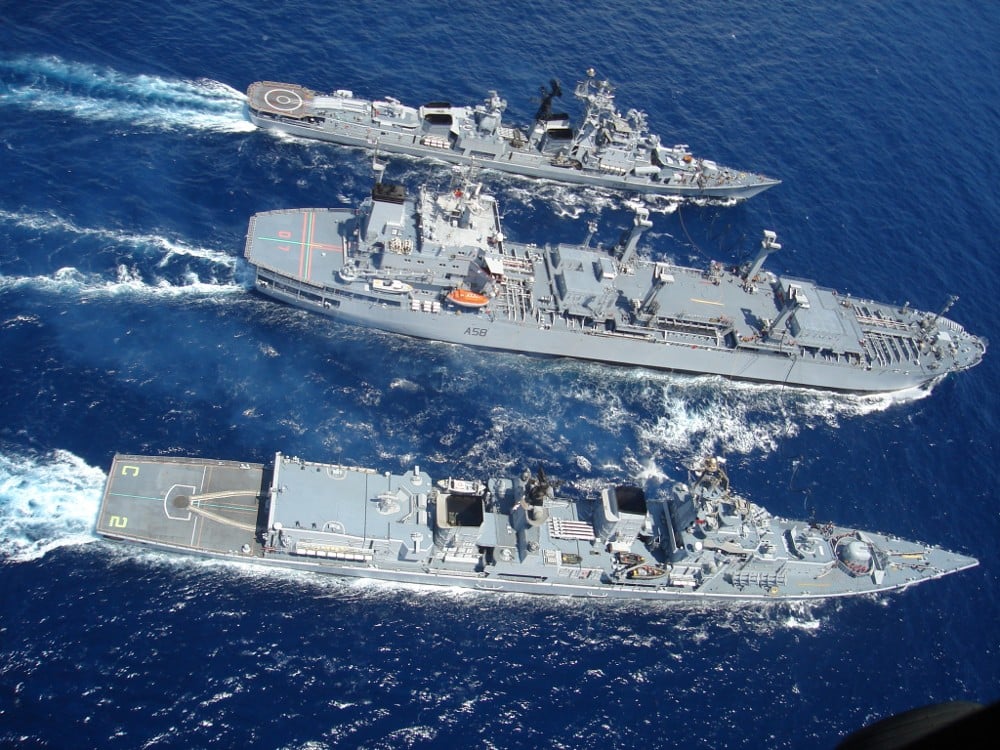 Two Chinese submarines docking in Colombo finally woke up India from its slumber. It rang alarm bells in the corridors of power and strategic community and forced the government to take notice of the tentacles the Chinese were spreading over the Indian Ocean Region. Prime Minister Modi’s visit to Mauritius, Seychelles and Sri Lanka is part of this “awakening”. India has now signed agreements to develop one island each in Seychelles and Mauritius.

The Island nations of Sri Lanka, Maldives, Mauritius, Seychelles, Madagascar have always been under Indian influence. The latter three islands have substantial Indian origin populations. Barring Madagascar, India has intervened militarily/covertly in all these countries. An unwritten “Monroe Doctrine” where India will not entertain any government that is not pro India.

In 1983, India almost militarily intervened in Mauritius. Operation Lal Dora was approved by the then Prime Minister, Indira Gandhi for a secret landing of Indian troops in Mauritius. These troops were to help the Mauritian Prime Minister Anerood Jugnauth fight off a challenge from his radical rival Paul Berenger which India feared might take the form of an attempted coup. The plan was aborted in favor of a RAW led operation which was successful.

In June 1986, India under Operation Flowers are Blooming deployed INS Vindhyagiri at the Seychelles Port of Victoria to abort a coup attempt against President Rene. India again helped avert another coup in September of 1986 when Prime Minister Rajiv Gandhi lent President Rene his plane to fly back to Seychelles from Harare where he was attending an international meeting.

In 1988, Under Operation Cactus, India swiftly put down a coup attempt by Tamil mercenaries in Maldives. India landed troops in hours after appeal from the then President of Maldives Mr Gayoom, which quickly secured all the vital installations in Maldives. Swift operation by the military and aided by intelligence agencies successfully quelled the attempted coup in the island nation.

Indian intervention in Sri Lanka is well known. Although it was to be a peacekeeping operation, it got involved in battling the LTTE and eventually withdrew. The Indian forces were in Sri Lanka for nearly three years starting July of 1987. What preceded this and the rise of the Tamil movement with Indian backing due to the increasing US attempts to secure a base in Sri Lanka. India was averse to any such decision during the Cold War where it was in the Soviet camp for all practical purpose though it remained non aligned.

So India has not shied away from undertaking military operations in the Indian Ocean Region whenever its interests have been threatened.

Noted Chinese military leader Zhao Nanqi back in the 1990s said “We can no longer accept the Indian Ocean as an ocean only of the Indians". Over the last few years, as Chinese economy boomed and its military capabilities expanded, it sought to challenge India in its backyard. The theory of String of Pearls came into being in which China sought to encircle India through a series of investment in ports around India’s neighbors. China denied any such motives. China has now embarked on a new project to exercise influence in the Indian Ocean region by means of “Maritime Silk Route” which is nothing but rehashed String of Pearls.


India for most past of the last two decades has “Looked East” to increase trade and influence with the countries of ASEAN and neglected the Indian Ocean Islands. China stepped in providing a lot of aid and developed infrastructure. These small islands have nothing against China and were happy to receive whatever it got from them. India on the other hand has not given a lot to these countries partly because India doesn’t have the kind of money China has. China has attempted to secure a military base in the Indian Ocean. Seychelles and Mauritius were ideal locations for it as 70% its oil shipments passes the region and it is close to the US base of Diego Garcia. India has made sure this has not come to pass and the new deals with these two countries effectively shuts the door. India has also propose a counter for the Maritime Silk Road with its own "Mausam" project reviving the old spice routes.

India already has a monitoring station in northern Madagascar, complete with radars and surveillance gear to intercept maritime communication. Plan is to have 32 radar stations installed across Seychelles, Mauritius, Maldives and Sri Lanka. PM Modi handed over one such station to Seychelles during his visit. India has also provided surveillance aircrafts to Seychelles and Mauritius. PM Modi during his visit to Mauritius commissioned Barracuda Naval Patrol Vessel which is the first warship to be exported by India. More is to follow.

The countries of ASEAN have been looking at India to be a net security provider for it in the face of increasing Chinese aggression. As India develops the islands it has secured from Seychelles and Mauritius, it should look to convert this into a stronger military relation between India and both these countries. India should look to sign treaties with these countries to handle their defence just like we do for Bhutan. That Mauritius has 68% of its population of Indian descent and Seychelles about 10% will help. The affinity they have towards India was visible with the kind of reception PM Modi got from them. India can leverage this to create military alliance.

The fear of China is genuine and present. China helped rig the elections in Zimbabwe to get Robert Mugabe re-elected. In Sri Lanka, it backed Rajapakse and got projects at inflated price with a not a lot to gain for the local population and wholeheartedly helped with his campaign to get re-elected. From East Asia to Eastern Africa, the threat of China is there and India with its growing economic and military power is looked upon as a source for security and stability. Even the US wants India to take up that role while it looks to concentrate on the Pacific Ocean and the Chinese threat there.

India should look at having military bases in foreign countries, something it has been shy of. In the 1980s, Zimbabwe had asked the then PM Rajiv Gandhi to station Mig 21s in Zimbabwe and Mozambique. Rajiv Gandhi declined saying he is not in favor of deploying bases on foreign shores. A look at the US and the way its military operates shows us that strong friends, alliances and bases all over the world is what helps it project power.

While India develops its naval assets of aircraft carriers, submarines and other surface combatants to project power across the region, it will require to develop a strategic doctrine for the Indian Ocean Region all the way to East China Sea. Having a strong navy is only the means to achieve the strategic objectives. Otherwise it will be like soldiers sent on a mission without any specified objectives.