WolfPack86 said:
Keep Hindustan Aeronautics Ltd out of Naval helicopter plan: Private companies to govt
New Delhi: The private sector wants the Centre to bar Hindustan Aeronautics Ltd NSE -1.02 % (HAL) from a ₹21,000 crore plan to manufacture naval utility helicopters (NUH), saying that the state-owned company has an undue advantage as it has access to government-funded infrastructure and the ability to cross-subsidise the bid through other nominated orders.

The companies were responding to a question posed by the defence ministry in May on allowing HAL in the competition, which was reserved for the private sector as reported by ET. They said the monopoly of the state-owned enterprise needs to be broken and a level playing field is needed for all bidders.

As part of a re-evaluation in May, the defence ministry asked the contenders if the programme had export potential and raised the prospect of HAL being given a chance to be part of it.

HAL Running at Full Capacity’
Sources have also told ET that a proposal has been floated to give HAL a chance to provide an indigenously developed naval version of the advanced light helicopter by developing a few prototypes for evaluation by the service in a three-year timeframe.

In response to the defence ministry’s queries, it’s learnt that the private sector competitors have pointed out that the only large aerospace company India has developed in over seven decades is HAL as it has been given nominated orders and that healthy competition can only be ensured by encouraging others as well.

Among the responses are suggestions that while HAL will remain a major helicopter manufacturer, a second line is needed in the private sector that can become part of the global supply chain and offer viable products for the export market as well. The responses also pointed out that HAL already has an order book of ₹60,000 crore and is set to get another nominated order worth ₹39,000 crore for light combat aircraft (LCA), besides Kamov KA 226T choppers for the army, asserting that it’s already running full capacity.

The Federation of Indian Chambers of Commerce & Industry (Ficci) earlier wrote to the defence ministry against a “dilution of the strategic partnership model.” The letter said that the private sector has been struggling for orders despite building capacities in line with the Make in India plan and HAL as a competitor will make it a “non level playing field.” 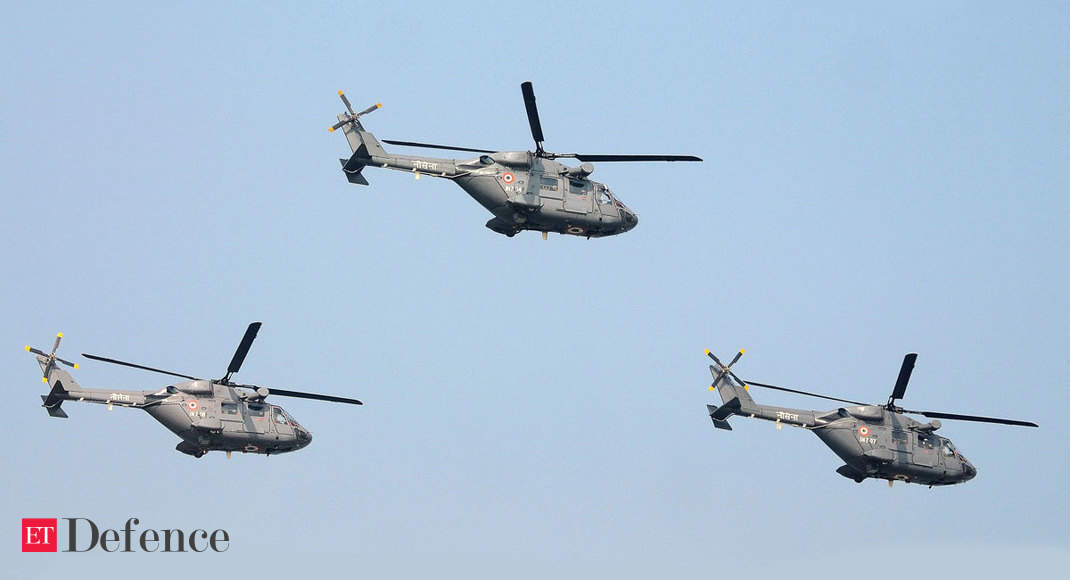 What kind of logic is that. HAL has an Indian design / Indian product on the offer. These private companies want that development to be thrown away to break HAL monopoly while they will gladly charge more for Russian gear.

The only fair ground should be when both psu and private player has indian design developed product otherwise whoever offfers Indian product should win automatically.

IndianHawk said:
What kind of logic is that. HAL has an Indian design / Indian product on the offer. These private companies want that development to be thrown away to break HAL monopoly while they will gladly charge more for Russian gear.

The only fair ground should be when both psu and private player has indian design developed product otherwise whoever offfers Indian product should win automatically.
Click to expand...

Right now there is no time either for HAL or private. I think outright import is the only option.

However private companies are correct that some projects need to be reserved for private players.
This is to establish an Indian MIC.

garg_bharat said:
Right now there is no time either for HAL or private. I think outright import is the only option.

However private companies are correct that some projects need to be reserved for private players.
This is to establish an Indian MIC.
Click to expand...

Modified dhruv with folding blades is ready . It can very well be naval NUH.

Private players should be preferred in area where no Indian alternative is available.
W

Citing Defense Aviation Post, the Indian Navy could acquire 57 twin-engne fighter aircraft that will be used on the aircraft carrier Vikramaditya. The new jet will be developed by the Indian Defence Research and Development Organisation (DRDO) that should be ready by 2026.


The Vikramaditya has been designed as a STOBAR (Short Take-Off But Arrested Recovery) carrier capable of operating both conventional fixed-wing aircraft and helicopters, with up to 34 aircraft[10] capable of being accommodated. Its primary embarked aircraft type is the Mikoyan MiG-29K, a navalised version of the Mikoyan MiG-29M. The MiG-29K is an advanced, all-weather multi-role fighter capable of undertaking both the fleet air defence, low-level strike, and anti-shipping roles.

Currently, the Indian Navy has 45 Russian MiG-29K aircraft and its officials had stated that there will not be enough aircraft to operate from both carriers. The Indian has also shown interest for the acquisition of the American F-18 Super Hornet or the naval version of the French Rafale. 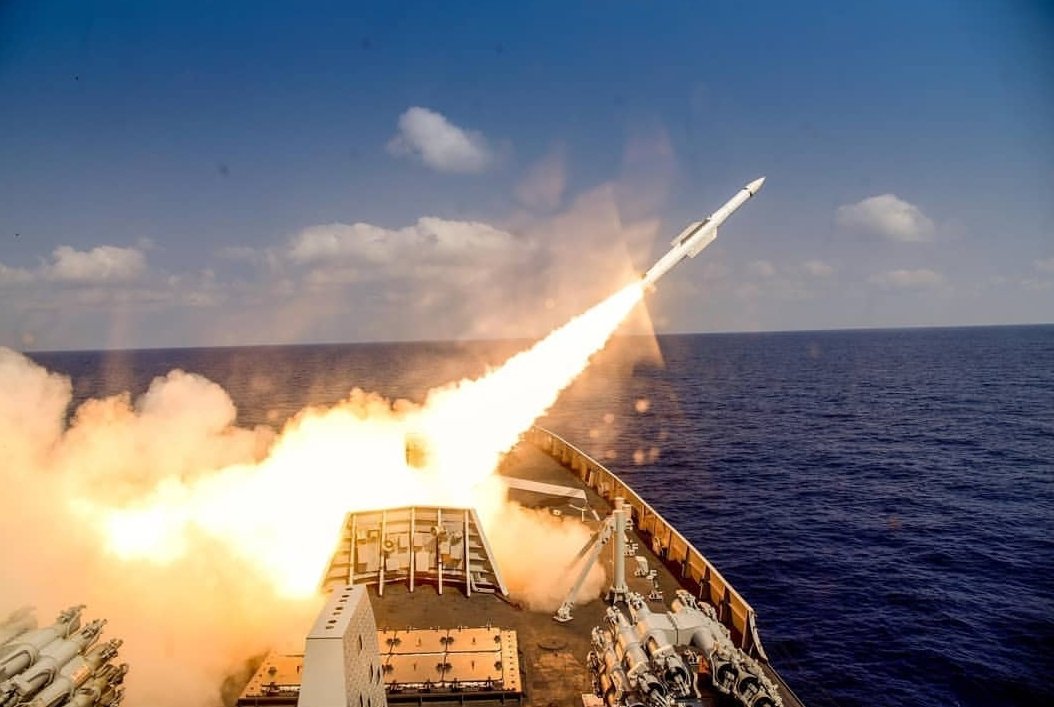 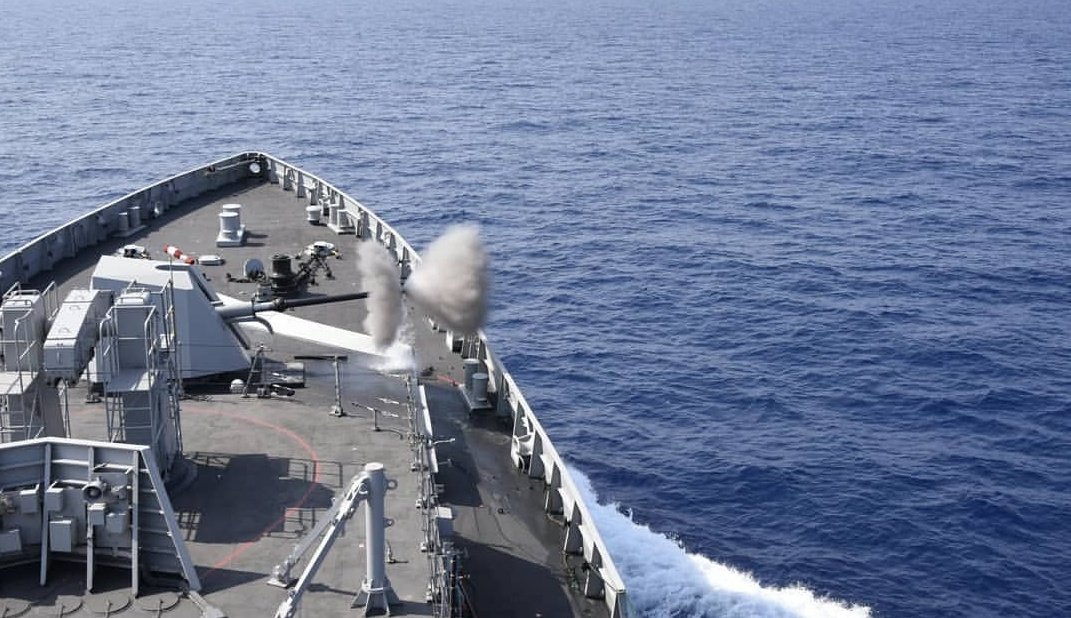 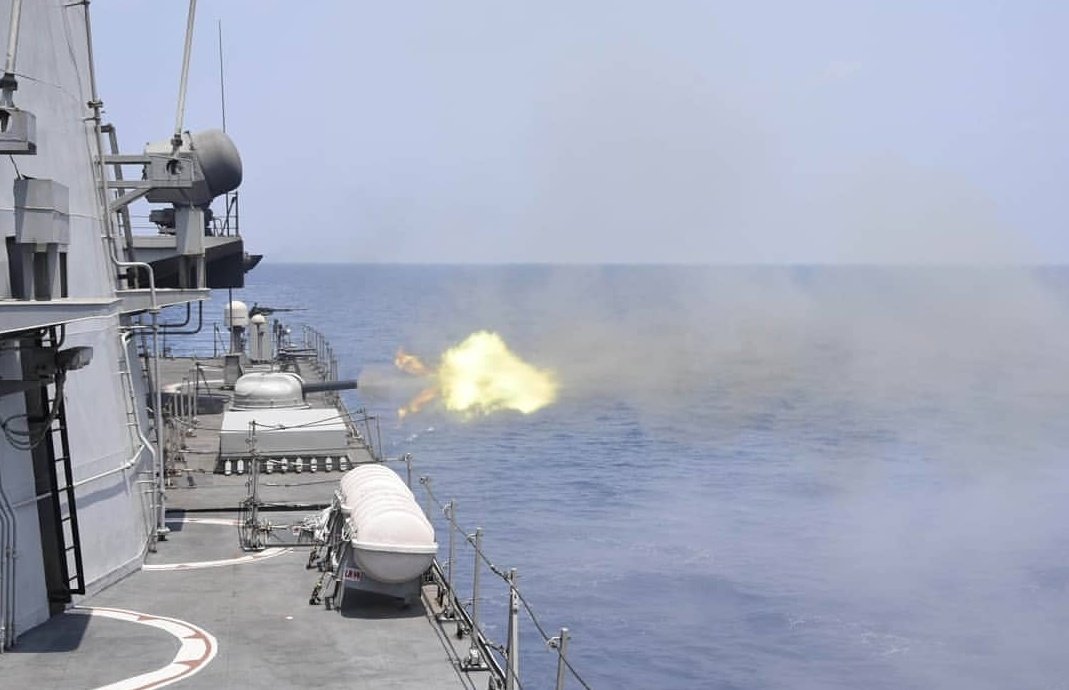 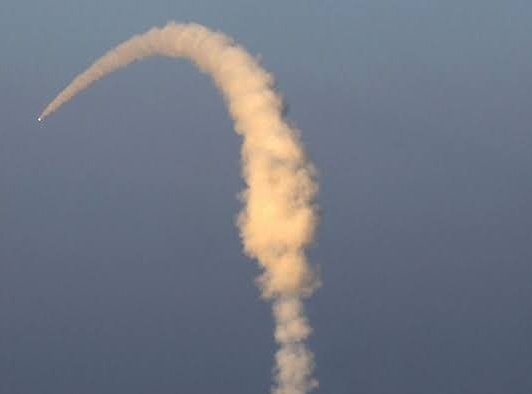 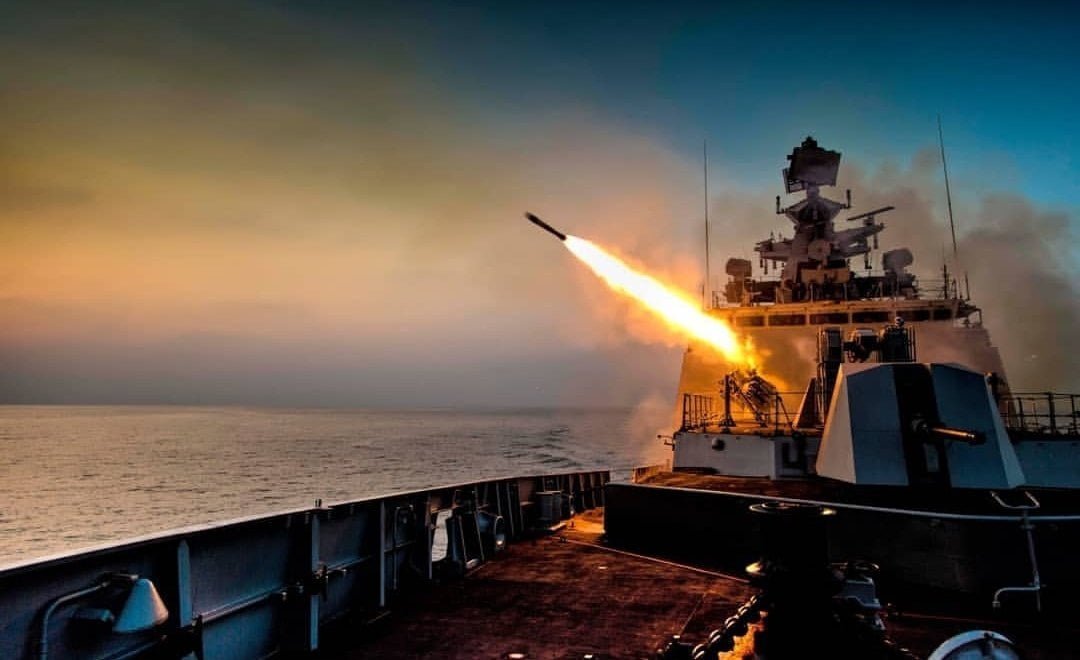 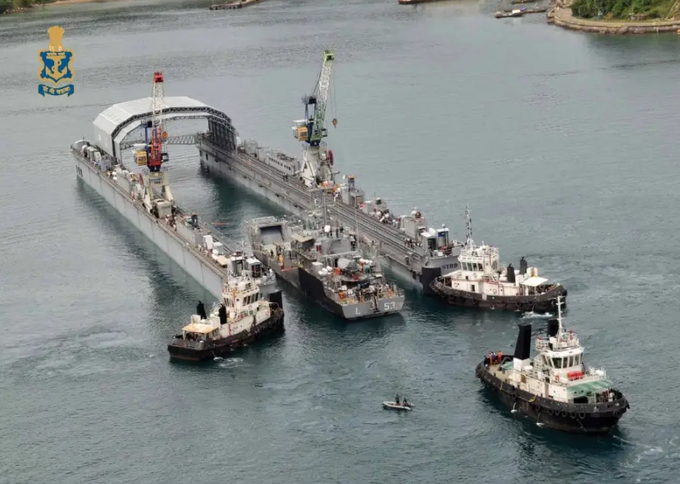 INS Sahyadri Testing all of it's weapons .
Click to expand...

Can you identify the first missile? This one -

mist_consecutive said:
Can you identify the first missile? This one -

mist_consecutive said:
Can you identify the first missile? This one -

That is probably shitl 1 used so in burk air defense System's . The reaction time is 5–10 seconds (Shtil-1) . The interval between starts is less 2 seconds. To protect against boats, helicopters, aircraft, anti-ship missiles . 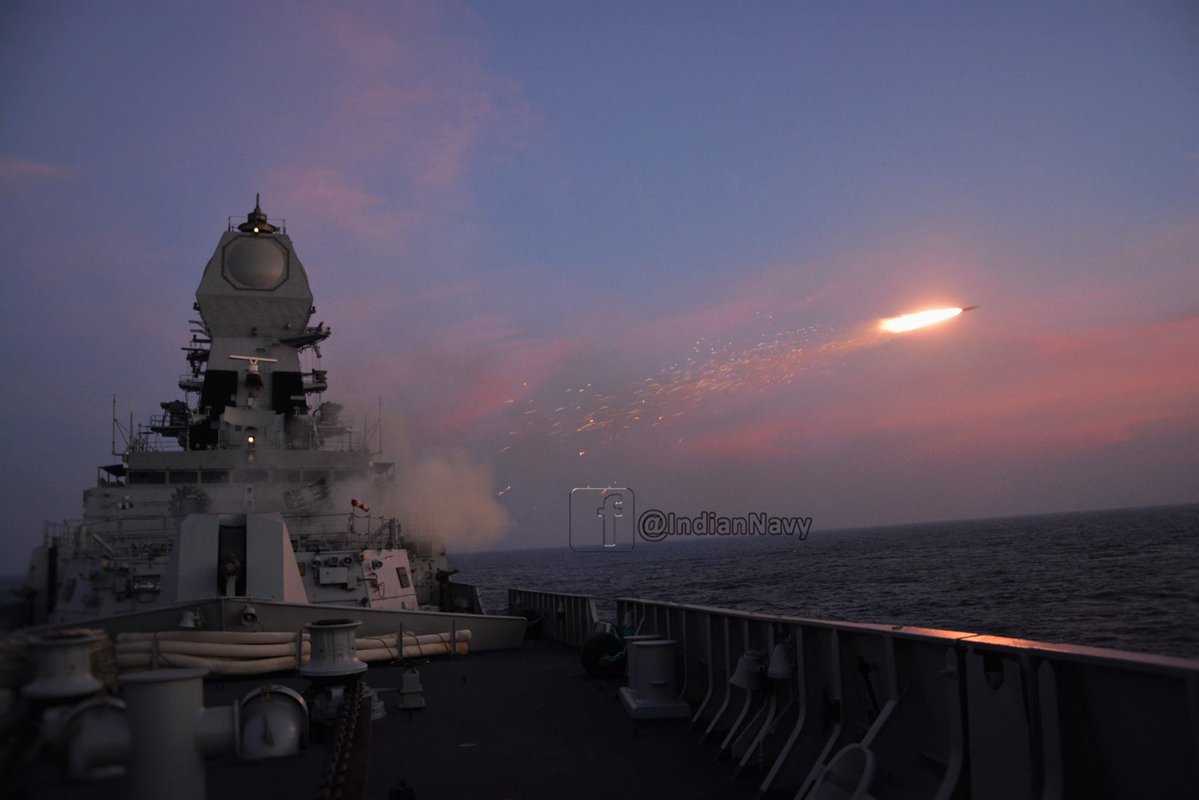 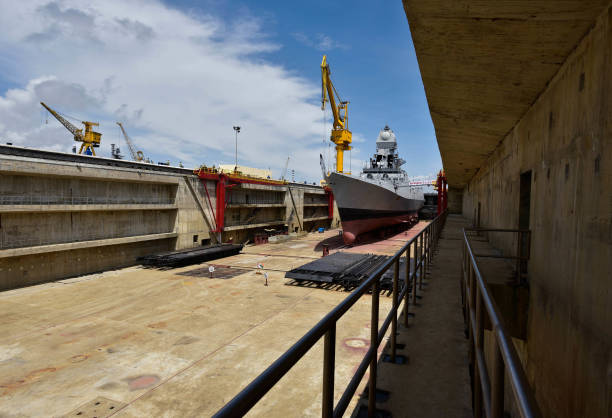 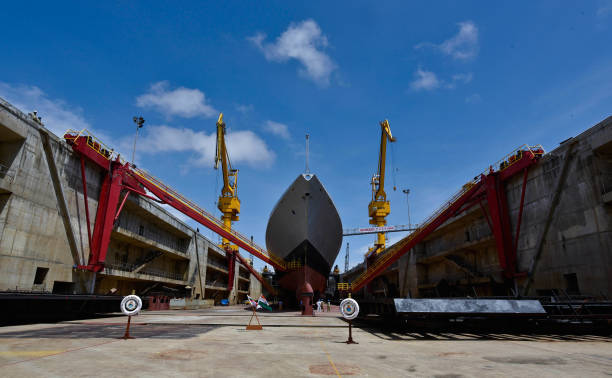 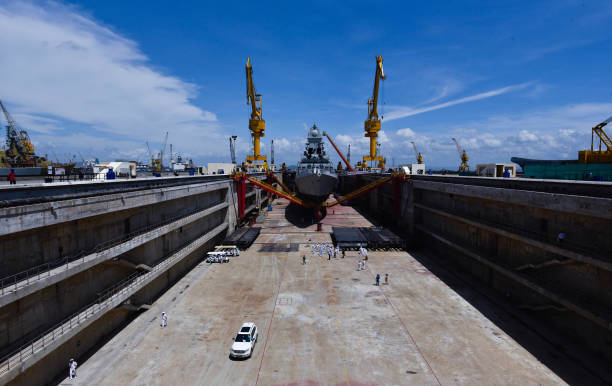 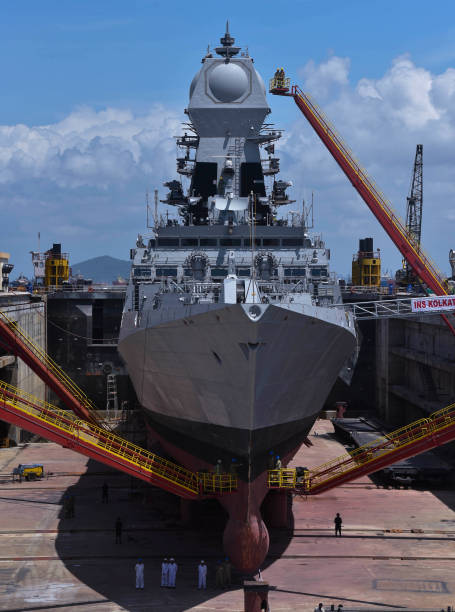 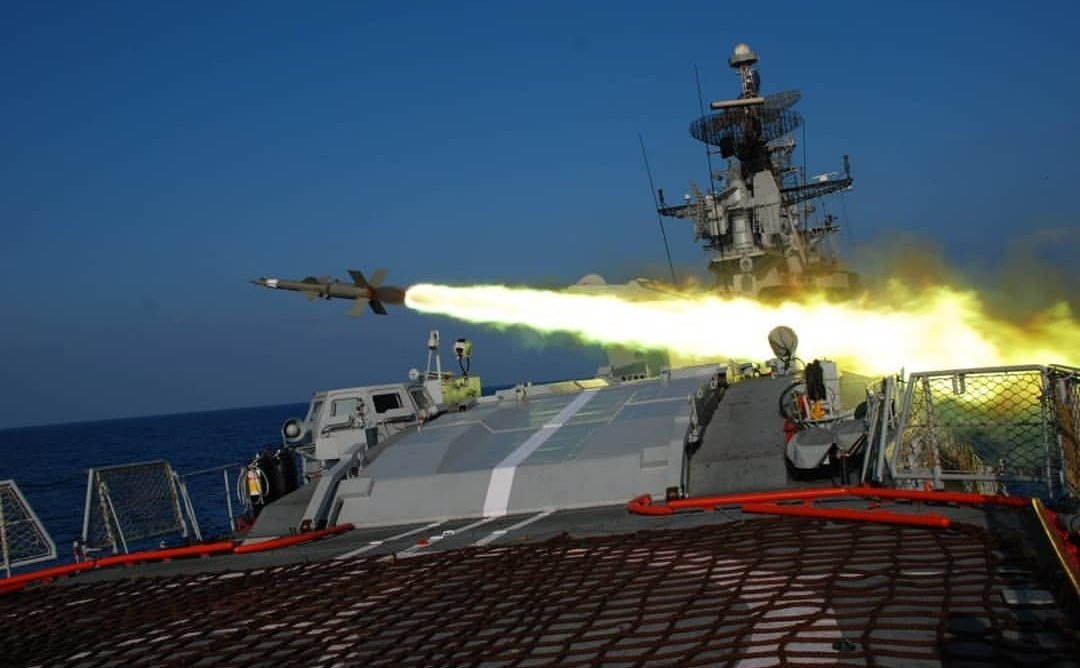 Make In India: Indian And Turkish Shipyards Close Contract For Building FSS Ships For The Indian Navy
As was first reported by Financial Express Online in 2019, the Turkish Shipyard was L1 and had technically qualified for the FSS project for the Indian Navy. In fact, it was down-selected from among three companies who had made the cut earlier.

Who All Were In The Race?


In the initial stage, seven global companies had responded to the Request for Proposal (RFP) and these included Italy based Fincantieri, Navantia from Spain, Rosoboronexport (ROE) from Russia, the German ThyssenKrupp Marine Systems (TKMS), and Turkey’s Anadolu Shipyard. The RFP was for the construction of five ships under the FSS project and was estimated to be at a cost of $2.3 billion.

At the end of talks and negotiations, only three companies were shortlisted and these were TKMS, ROE and Turkey’s Anadolu Shipyard.

The contract between the two shipyards was inked after the detailed analysis was done of the technical and financial aspect. There were a series of discussions related to price and ensured that all requirements were met before the contract was inked between the two yards recently.

This is the first time at a shipyard from Turkey is participating in a defence contract in India. As has been reported by Financial Express Online, the Anadolu Shipyard is part of TAIS industrial group. And the discussions were with the shipyard and not the TAIS group.

What Will The Turkish Yard Do?


This shipyard will be giving the ship design, provide technical assistance and also supply the key machinery equipment (KME).

And, the HSL will be providing the latest technology which will include the pre-outfitting and the modular construction. Also, HSL will follow the best shipbuilding practices.

More About The Project?

All the components onboard the ships will be made locally in India and the construction of five ships of about 45,000 tons full load displacement will help in giving a fillip not only to HSL but the local small and local companies will be playing a critical role in this huge project.

Even the steel used in the shipbuilding will be from India.

The local industries of cable laying, zonal painting and blasting as well as related small scale industries will get a lot of work.

This is the first time at a shipyard from Turkey is participating in a defence contract in India As was first reported by Financia...

utubekhiladi said:
while we busy worrying about china.

porkistan is slowly building up its navy to match INS in numbers. - thanks to china and turkey

does anyone have more insight into this?
Click to expand...

We should be worried about the submarine buildup by Pakistan...very soon they will match ours in numbers and capability in terms of submarines, while we are still twiddling our thumbs on P 75 (i). IN is woefully short in terms of modern submarines vis a vis combined submarine force of China and Pakistan. Though a majority of Chinese diesel submarines can't operate independently in Indian Ocean, but they are developing Indian Ocean ports for this purpose. New AIP equipped Chinese submarines shall be acknowledged as a threat. Hambantota and Gwadar are real threats.

Ports & Submarine build-up by Bangladesh can not be overlooked, which can be a headache along with Chinese machinations. Our defensive posture with induction of more and more P8i can offset this imbalance only to an extent, but adequate submarine based offensive capability need an immediate shot in the arm. The delay in P75(i) is bewildering. I can't make the head and tail of the delay here...Enemy is at our gates and our 30 year submarine plans are lying in tatters. Additional SSNs will be tied up with either the AC group or protecting our SSBNs. It is high time military planners and our Govt. wake up to this threat otherwise we will be found making emergency purchases like light tanks. We don't start cooking after guests are sitting at the Dinning Table.
W

The local industries of cable laying, zonal painting and blasting as well as related small scale industries will get a lot of work. The Hindustan Shipyard Limited (HSL) is going ahead with Turkish shipyard partner M/S Anadolu shipyard after signing a contract with them for technical...
www.defencenews.in
W

So TOI reports #IndianNavy to push proposal of IAC-2 , the second indigenous aircraft carrier. While the induction of IAC-1 is delayed it is also cleared that MCRBF requirement is now downed to 36 just as indigenous TEDBF will be readied soon.