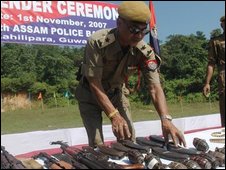 The government in India's north-eastern state of Assam is recruiting 700 surrendered rebels as "special police officers" to fight separatists.

Assam police's additional director-general Khagen Sarma told the BBC that they would be initially recruited on a "temporary basis" for a few months.

He said that their conduct and performance would be reviewed before their "service is regularised".

The insurgency in Assam has been one of the longest-running in India.

Police want to ensure that "unwanted elements" are not inducted, says Mr Sarma, who heads the intelligence wing of the state police.

"Some of the surrendered militants are unruly and would be difficult to control. We don't want them.

"Also we want to make sure that they are capable of contributing to the counter-insurgency."

While the Ulfa is still fighting for Assam's independence from India, the other groups say they are fighting for separate homelands for their tribes. The Multa is an Islamic radical group that says it wants to avenge attacks and torture on Muslims in Assam. 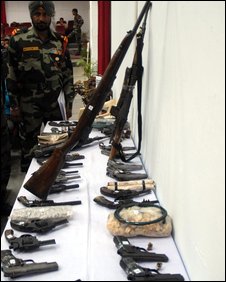 The army has confiscated large arms hauls
from surrendered rebels​

Scores of surrendered insurgents have been recruited in this way in other parts of India - including the Maoist-affected state of Chhattisgarh and the insurgency-hit state of Tripura in the north-east.

The surrendered militants in Assam are already protesting over their proposed pay.

Mr Sarma rejected the claim. "We requested the government to consider a salary of 4,500 rupees. The government said it has financial limitations and can only pay 3,000 rupees. So that's what it is."

Police in Assam have often been accused of extrajudicial use of surrendered militants to attack rebels and their families.

When India's Congress government came to power in 2001, it set up an enquiry to investigate such attacks but its findings appear to have made little difference.

Many surrendered Ulfa militants have visibly amassed huge personal fortunes by running extortion rackets against active militants allegedly with the full knowledge of the security forces.

Some have even taken control of newspapers, buying them from their financially ailing managements.

"All seems to be okay with surrendered militants so long as they help security forces fight their former colleagues," says Samir Das, author of a book on the Assam insurgency.