The Next Generation of Spy Plane

The Next Generation of Spy Plane

CBS) "Early Show" weather anchor and features reporter Dave Price was to fly in a U-2 spy plane Thursday in the "Edge of the Earth" series. However, before doing that, he gave viewers an inside, exclusive look into what just might be the future of U.S. espionage aviation -- the Global Hawk. Though the U-2 still provides the most detailed photo images for intelligence gathering, the Global Hawk could one day replace the 50-year-old U-2.

The Global Hawk is an unmanned reconnaissance aircraft that collects digital images at high altitudes. The plane is 116 feet wide, 44 feet long and can stay in the air, sometimes, for an entire day.

The aircraft, Dave pointed out, has many similar characteristics to other surveillance and intelligence-gathering planes, but is so technologically advanced, its mechanics work mainly from a laptop -- and there is no pilot on board. Still, its missions operate in a very similar way to the U-2's. They begin with briefings and pre-flight checks. The difference, however, is where the pilot sits --in front of a computer.

However, as one pilot pointed out, "It's real." 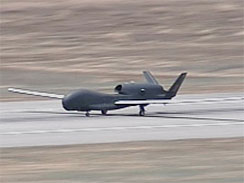 Much of what The Global Hawk does is classified at the highest levels, but as Dave noted, "The Early Show" is the first national media outlet to be allowed inside a Mission Command Center, from which the plane is controlled as its missions are carried out thousands of miles away.

Inside the command center, the computer terminals are essentially a cockpit. The primary mission for these pilots, Dave said, is to support the troops on the ground and get them imagery they specifically request, such as a picture of what's over a hill for embedded troops in Afghanistan looking to move.

And even though they might not be physically on board, Global Hawk pilots feel the same sense of risk and reward. One pilot told CBS News, "When you get the right info to the right commander at the same time and he can save a life, it's extremely satisfying."

Dave added that the technology is also a comfort for pilots' families. He said one pilot's wife said she's thankful her husband can come home every night, and she knows he's safe. "It's a very interesting angle, not only from the technology side, not only from an effectiveness side, but for what it means for troops," Dave said. "It's just remarkable to watch all of this in action." The U-2, Dave added, is still used because its film technology doesn't lose any detail at close range, whereas the Global Hawk's images become pixilated.


The Next Generation of Spy Plane - The Early Show - CBS News

The U.S. military will soon have a new solar-powered unmanned spy aircraft that can fly non-stop for more than five years.The aircraft, called SolarEagle, which is being built by Boeing is designed in such a way that it can soar in the upper atmosphere for years, constantly sending surveillance and intelligence information back to the ground.The U.S. military has already given Boeing an $ 89-million contract to develop a SolarEagle demonstrator which will make its first flight in 2014, the Daily Mail reported.


During testing, the SolarEagle demonstrator will remain in the upper atmosphere for 30 days, harvesting solar energy during the day that will be stored in fuel cells and used to provide power through the night, it said.The aircraft will have highly efficient electric motors and propellers along with a 400-foot wing for increased solar power and aerodynamic performance.


Pat O'Neil, Boeing Phantom Works program manager for Vulture II, said: "SolarEagle is a uniquely configured, large unmanned aircraft designed to eventually remain on station at stratospheric altitudes for at least five years."That's a daunting task, but Boeing has a highly reliable solar-electric design that will meet the challenge in order to perform persistent communications, intelligence, surveillance and reconnaissance missions from altitudes above 60,000 feet."


According to the report, the aircraft's developer Phantom Works, Boeing's research and development arm, is also working on a fighter-sized, unmanned, advanced technology demonstrator called Phantom Ray, scheduled to make its first flight in early 2011.
Its other projects included a hydrogen-powered aircraft called Phantom Eye - a High Altitude Long Endurance aircraft that can stay aloft for up to four days. It is also scheduled to make its first flight in 2011.