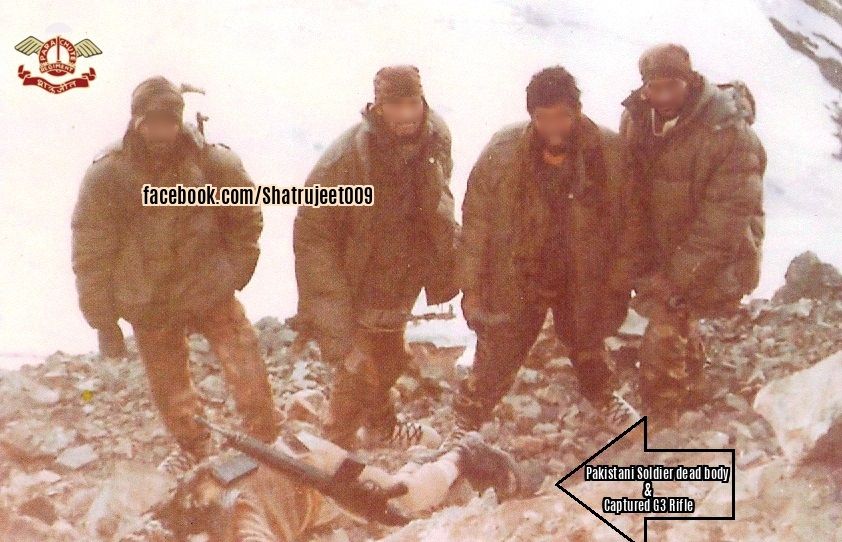 That g3 is bigger than the dead pork.
R

Published on Jul 9, 2017
It was 18 years ago, on 7th of July 1999, Point 4875 from the Mushkoh valley, Dras sector was captured by the 13 JAK RIF (13th Batalion of the Jammu And Kashmir Rifles). Captain Vikram Batra made the supreme sacrifice on the same day, before overcoming vital enemy sangar positions, neutralizing many enemy soldiers and saving many lives.

This video shows the immediate scanario of Point 4875. Pakistan betrayed it's own men of the forces by not accepting their casualties and their bodies, to maintain their stance of plausible deniability of the Kargil incursion which they had taken in front of the world. Secondary motive to this was to maintain the morale high in the troops which were already fighting a losing war. Indian Army, displaying the highest levels of chivalry and honour, buried fallen Pakistani soldiers with full respect.

Indian Army Moulvis performed the last rites of the Pakistani soldiers fully according to Islamic traditions, as seen in the video. The video also features then Lt. Col Yogesh Kumar Joshi, CO of 13 JAK Rifles, describing the burial.

In the last part of the video, Bikram Singh (later COAS) explains various facts of the Kargil Conflict in a press conference.

This period, early days of July was the turning point of the War, when Pakistan began it's withdrawal from the occupied areas, after heavy losses as well as surmounting international pressure. We will keep posting on the further proceedings of the Kargil war in the coming days. Stay tuned.

Remembering Kargil: Colonel Lalit Rai (VC), Commanding officer 1/11 Gorkha Regiment shares a incident when they ran out of ammunition and were close to death:

Not sure if this video is already published..
Feat of tremendous bravery by yogendra singh yadav

Brood Father said:
Not sure if this video is already published..
Feat of tremendous bravery by yogendra singh yadav

Lol, this video had to be posted here, please check the replies under Startup Division. Really funny how the Turk bitch and Pak bitch gets fucked. If anyone is jobless please contribute.

On 19th February 1999, India’s then Prime Minister, Shri Atal Bihari Vajpayee undertook a journey across the Attari-Wagah border. It was a historic visit to Lahore, undertaken to break the impasse in the India-Pakistan relationship and to give peace a chance.

Pakistan’s Deceptive Plan: The Kargil Infiltration
In hindsight, it appears that India was once again taken in by Pakistani perfidy. The Pakistan military had already set in motion plans to capture the Kargil heights while the Indian premier was treading the path for peace. The preparations for it were on in full swing in the Gilgit-Baltistan region of Pakistan Occupied J&K (POJ&K). Listening in on the speech, the then Pakistan Army Chief, General Pervez Musharraf must have been chuckling silently to himself. The proof of Pakistan’s deception was the Indian premier talking of peace in Lahore.

Often times I fear the consequences of war and I still shake thinking about more. But it is true that reading acts of bravery and wits are awe-inspiring.

You must log in or register to reply here.
Similar threads
An Analysis of the Kargil War
How Pakistan’s Faulty Missiles Stopped a Nuclear War During Kargil
Col. Lalit Rai VrC of the Indian Army -- Kargil War Story
How IAF’s air warriors helped turned the tide of the Kargil war
Share:
Facebook Twitter Reddit WhatsApp Link