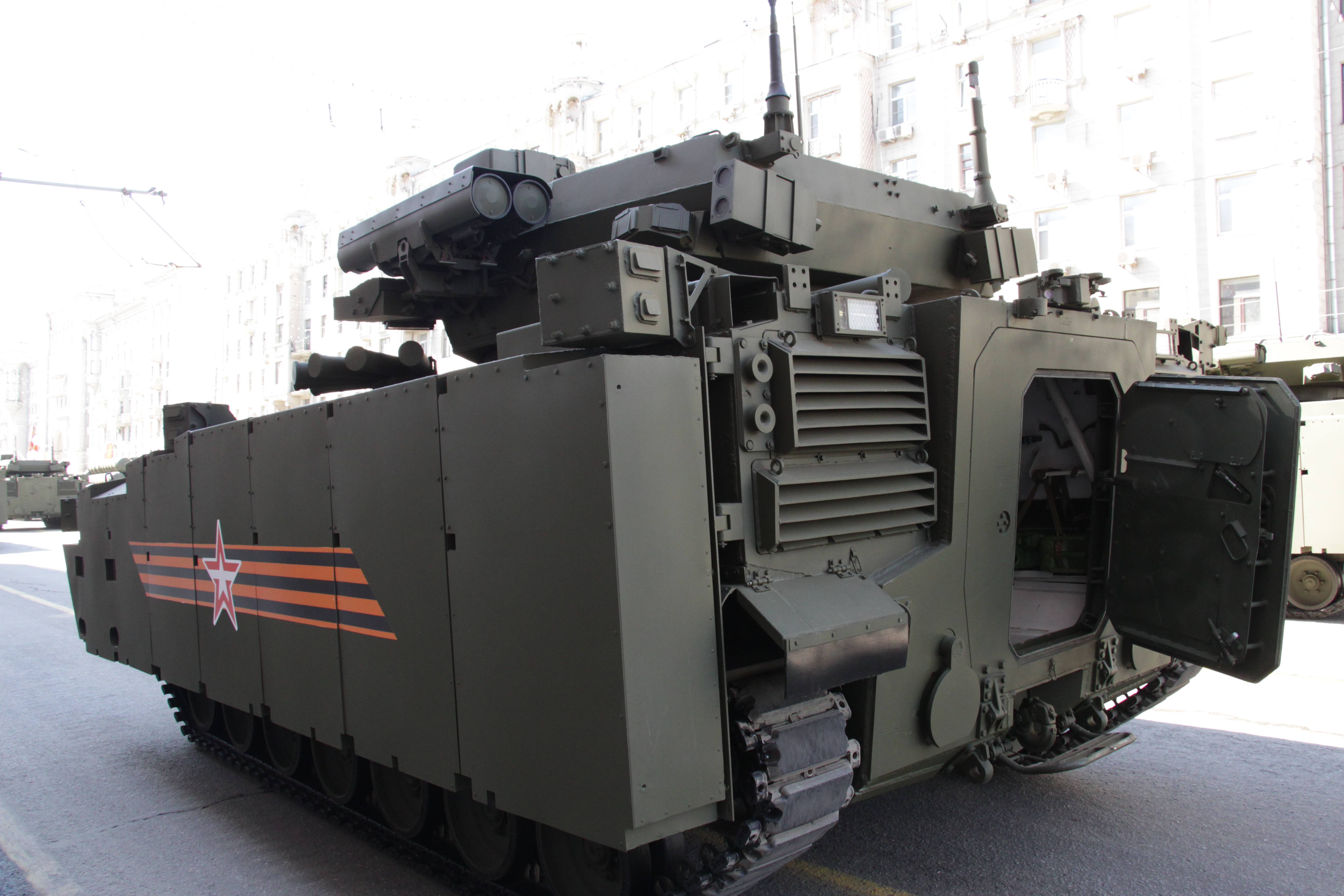 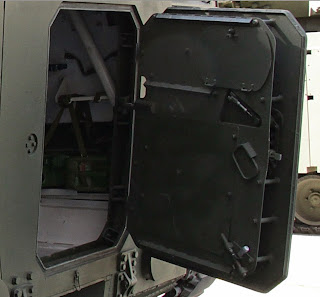 
The appearance of Russia's state-of-the-art Armata tank at Victory Parade on May 9 in Moscow produced a bombshell effect. Indeed, the T-14 Armata has no analogue in the world. Moreover, Armata is the only tank to date that corresponds to the military principle of six zones.

It is hardly an exaggeration to say that the impressive demonstration of new Russian tanks T-14 Armata produced quite an impression on both tank experts and common people. Why did the new tank get so much attention? The United States, England, France, even Greece, Turkey, Australia and South Korea have their tanks. Nevertheless, all of those countries evinced great interest in the latest Russian Armata tank. Why is that?

To begin with, new tanks do not appear very often. All latest variants of US Abrams, German Leopard and Israeli Merkava tanks are only modernized and modified versions of old models with new serial numbers and minor improvements. The gun, the engine, the armor and the chassis - all these major elements of the machine remain unchanged. A new version of the Leopard tank received a longer gun, but there were no principle changes made to the model.

The Japanese produced their new tank called Type 10, but it was also, in fact, in-depth modernization of the previous model.

The current state of affairs in the Russian economy is far from being perfect. The Russian defense industry still suffers from consequences of the dashing 1990s, the crisis of 2008 that developed smoothly into the crisis of 2014, the devaluation of the ruble, from sanctions and "junk rating". Suddenly, out of nowhere, new tanks with an unprecedented level of perfection appear.

Nowadays, a tank has far more enemies than it used to have during the Second World War. The experience of local military conflicts of recent decades allowed to create a theory, according to which a modern tank should meet several highly important requirements - so-called "six zones" principle.

The first of the six zones is called "avoid a collision." That is, tanks should avoid collision with a more powerful enemy and destroy a weaker enemy on a battlefield.

The T-14 Armata is equipped with a radar, the detection range of which reaches 100 km. The radar detects all types of approaching ammo and destroys them in an automatic mode. The idea is not new, but with T-14, it has been implemented to the maximum.


The second zone is called "avoid detection." A modern tank must be hard to detect. All signatures coming from the tank must be reduced to safe limits. Here it comes: the tower without a crew of the T-14 Armata is smaller than the towers of tanks of all other countries.

The tower of the US Abrams tank accommodates three crew members. This is a whole house, not a tank. How can it be disguised?

The third zone - "avoid target acquisition." All future tanks must be equipped with systems producing active interference. In short, a modern tank, like a plane, should have its own means of electronic warfare.

"Avoid hit" is the fourth zone that is about an "umbrella" that needs to cover the machine from all directions. Before destroying a missile that flies in the direction of a tank, one should at first detect the missile and bring the gun onto the moving target. Most likely, the T-14 is outfitted with such a system.

The fifth zone is called "avoid penetration." If a shell hits the tank, it must never break its armor. A look at armor shields that protect the body of the T-14 Armata means that the tank has such a solution.

Finally, the last zone is called "avoid destruction." If a shell breaks the tank's armor, crew members must stay alive. In the T-14 Armata tank, all three members of the crew are accommodated inside a special armored capsule.

Russia's new Armata tank is the tank of six zones that all other tanks will find very difficult to cope with, especially if Armata is supported with new infantry combat vehicles armed with four systems to launch anti-tank guided missiles.

Finally, the 60-ton tank has a 1,500 hp engine. The power-weight ratio of the new tank is 25 hp per one ton of weight, which is a very good indicator. The tank develops the speed of 70 km/h.

Russia never stops surprising our Western partners. The country that created the legendary T-34 tank has now built the tank of six zones, which is just natural progress - simple as that.

what is the weight of armata?
Why it has seven road wheels like arjun? T-90 had only six. 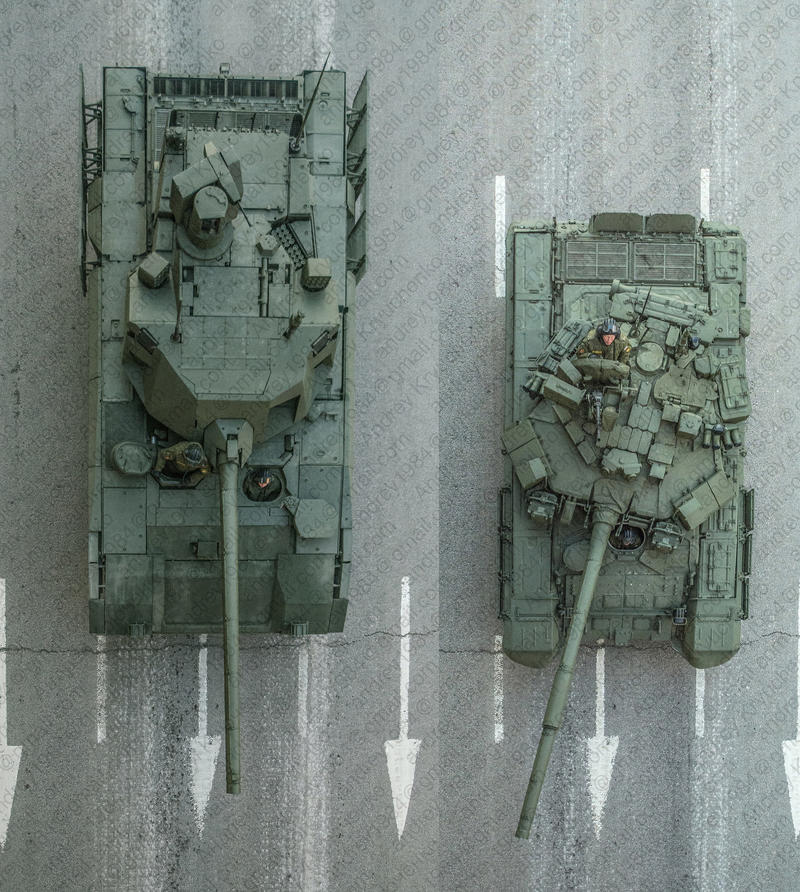 What do we know about "T-14" so far. Ill post up some interesting things I dug out. 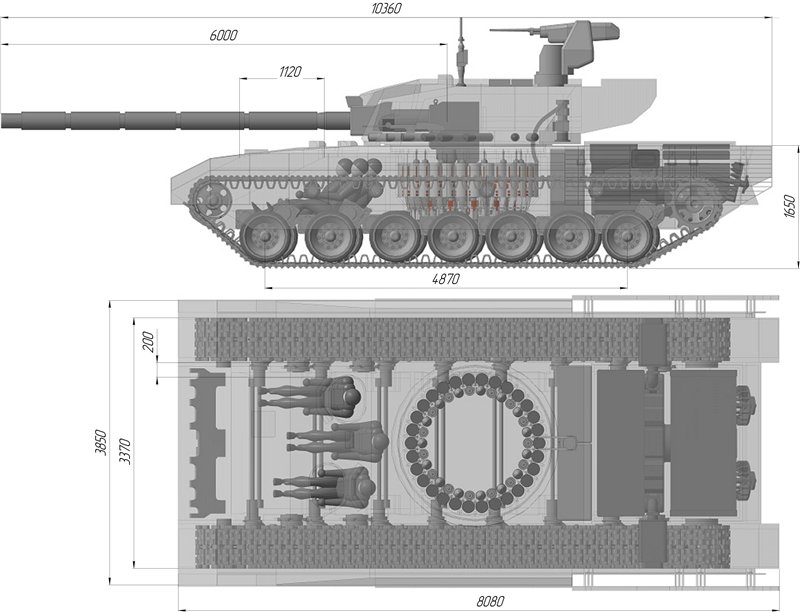 Definitely a hefty size but we need to keep in mind that actual turret is:

1. "Skinned", has integrated ERA especially on top and coat that gives it shape.
2. Can receive a 152mm 2a83 gun.
3. Superior gun elevation/depression, inherited from lack of crew space.

2a82m1 gun is supposedly 7 meters in length as opposed to 2a82 that was shown on parade.

New Vacum-1 ammo is about ~961mm and according to Russia deffence minister Mr. Rogozin penetrates ~1m of RHA. New APFSDS [source]. We can gather that since alleged speed is nearly ~1950m/s it probably uses a very powerful propelant.

It has been "hinted" that armata can be fitted with next gen large caliber gun and gun itself has passed state tests during experimental canceled t-95 (Obj.195) 2a83, at time deemed as "overkill".

Relevant links, lets of good stuff to read as pastime lots of good info, instead of me copy-pasting.
http://topwar.ru/71089-otechestvennye-proekty-tankovyh-pushek-kalibra-152-mm.html
http://vpk.name/library/f/armata.html
A

It critic hits somewhat harshly, I don't agree with everything but base assumption is very good.

I would recommend to give it a read, even if you are not a fan of soviet tech, you will be at home.

There are pictures of the Armata Family and other vehicles at the Russian Ministry of Defence website.

The main Soviet tank design school in Kharkov and Leningrad. Now, the cities is not developing tank for Russian army. However, the guns of 125 mm. High-Power is the right decision. 2000 m / s negate disadvantages short penerator. It is an advantage that it can be installed on all types of Soviet tanks (from China to Yugoslavia).
V

Akim said:
The main Soviet tank design school in Kharkov and Leningrad. Now, the cities is not developing tank for Russian army. However, the guns of 125 mm. High-Power is the right decision. 2000 m / s negate disadvantages short penerator. It is an advantage that it can be installed on all types of Soviet tanks (from China to Yugoslavia).
Click to expand...

What we know, 2a82-m fires its own ammo "vacuum-1" that has rather long kinetic penetrator. So the power of the new gun (its ability to propel projectile at ~2km/s) is coupled with new long kinetic penetrator. So "vacuum-1" can only be stored/fired from t-14 specific gun/autoloader that is 2a82 but older guns/autoloaders, even 2a46m-5 on t-90AM, cannot hold/fire that specific round.

In short, Vacuum-1 is not usable on anything other than t-14 generation and its speed and power come from both more power and longer penetrator. Older generations are stuck with older ammo, even that one is not to be underestimated...

However, if the recently published analysis of the U.S. cybersecurity firm Taia Global is correct, a crucial piece of the tank’s equipment – the night vision cameras – might not even be Russian-made!
Click to expand...

Russia’s inability “to produce a critical component — microbolometer arrays — which can capture images without requiring cooling, reducing the size and complexity of thermal imaging systems,” The Intercept, an online publication that analyzed the Taia Global report, explains.
Click to expand...

Consequently, in April 2014, Viktor Tarasov, the senior manager of a subsidiary of Ruselectronics, a state-owned hodling company, wrote a letter to its CEO in which he asked to press the Russian minister of defense for money to buy 500 microbolometer arrays from a French company.
Click to expand...

As Jeffrey Carr, CEO of Taia Global, told The Diplomat in an interview: ”We regularly see Russian research institutes conducting reconnaissance against U.S. companies who work on high value technologies such as lasers and other optical systems.”
Click to expand...

About lasers and clear optical systems - Russia can anybody teachin this technologies.

marrakesh said:
About lasers and clear optical systems - Russia can anybody teachin this technologies.

Microbolometers - is problem, but R&D nonstop:
http://microbolometer.ru/catalog/2-ir-sensors.html
Click to expand...

Interesting. Thank you for posting. Now, I have learnt about a new type of instrument. So, this does not require cooling, and thus, will be able to operate in extreme heat.

For a tank with automated turret, that thing in HUGE!. What happened to old Russian principle of keeping things simple? Trying to compete with west in quality? wtf? Never gonna happen. Like Stalin said quantity has a quality all its own.

jouni said:
For a tank with automated turret, that thing in HUGE!. What happened to old Russian principle of keeping things simple? Trying to compete with west in quality? wtf? Never gonna happen. Like Stalin said quantity has a quality all its own.
Click to expand...

which era you living , stalin is not there anymore .

salute said:
which era you living , stalin is not there anymore .
Click to expand...

I think he is emphasizing on what was said by Stalin, and not Stalin per se. He might not be alive today, but his concept might still be valid.

pmaitra said:
I think he is emphasizing on what was said by Stalin
Click to expand...