jouni said:
I am not an expert on sniper rifles, but for me it looks like M10 is way ahead of competition, it looks like a next generation rifle to my eye.
Click to expand... Line of precision hunting, target and tactical (sniper) rifles, produced in Russia under the ORSIS brand, is one of the most modern and best made Russian small arms. Privately-owned ORSIS rifle factory is located in the city of Moscow, and is run by renowned world-class long range shooters, supported by hand-picked development and production team. ORSIS factory commenced production of precision rifles early in 2011, by offering a broad line of rifles based on the same manually operated bolt action, including hunting, target and tactical / sniper rifles.

It must be noted that all components of the ORSIS rifles are made in house, including CNC-machined bolts, actions and trigger units, precision-cut barrels made from highest grade barrel steel, as well as polymer, wooden or aluminum stocks. So far early production ORSIS rifles displayed excellent accuracy under the ‘real life’ field conditions, routinely shooting 300-meter groups as small as 0.5 MOA, and often even better. Several ORSIS T-5000 tactical / sniper rifles are reported to be submitted for trials by Russian government.

ORSIS T-5000 sniper rifles are built on the manually operated bolt actions with more or less traditional dual front locking lug bolts. All actions are machined from high grade stainless steel, and are available in right- or left-hand versions and two basic sizes – standard (suitable for cartridges such as .308 Win and the like) and long (suitable for Magnum-class long range cartridges such as .338 LM). All actions are equipped with stainless-steel match grade barrels, bored, rifled, chambered and externally machined in-house, using state-of-the art CNC equipment. Barrels of the tactical rifles are threaded at the muzzle to accept muzzle brakes or other muzzle devices.

Trigger units are also of indigenous design and manufacture, made from quality steel. Trigger pressures can be adjusted between 500 and 900 gram or between 1000 and 1500 gram, all other critical parameters (such as trigger overtravel) also can be adjusted according to user preferences. Manual safety is conveniently located at the rear of the bolt and has three positions – “Fire”, “Safe”, and “Safe, bolt locked”/

ORSIS T-5000 sniper rifles are fed using detachable box magazines with 5- or 10-round capacity. Standard stock for ORSIS T-5000 sniper rifle is built on aluminum chassis, with glass bedding. Shoulder stock is side-folding and has proprietary hinge design and lock, made of steel for maximum stability and durability. Pistol grip and cheek rest are made from plastic.

ORSIS T-5000 sniper rifle in its standard configuration is not equipped with iron sights. Instead, Mil-Std 1913 (Picatinny) rail is provided at the top of the receiver, which allows installation of any type of day or night scope, according to user needs and capabilities. Other accessories may include detachable bipods of various design, sling swivels etc. Good to know; is this rifle in use with the Indian Army? If not let us keep this knowledge in the archives.

Once again educate me on the sniper rifles used by the Indian Army.

Can a member from India answer that question. Now I am tired of listening to a discourse from a Russian member.
C

Hari Sud said:
Sako never made into top ten sniper rifles of repute. The top title is held by Chey Tac with special ammunition (Lapua round). Next best internationally classified is Steyr, that also with special ammunition. Since sniper rifle making skill is limited and demand high, every arms manufacturer in every country is getting into the act. Hence Sako is another rifle trying its best to be recognized. Desert Tech is another in that category. All of these are good in one or the other category. Scopes are interchangeable, so are the mounts. Internal mechanisms differ a bit.

The longest sniper shot if I recall correctly was made with Accuracy International sniper rifle in Afghanistan at about 2500 meters. Others in sniper training schools have made long range kills of 2500 meters or greater but not in war like conditions where the enemy is shooting at you.

I like your fancy for Sako rifle. Has it seen war or is it still in the armouries gathering dust. Yes, sniper rifles are not exported, these are difficult to buy weapons. That is why Pakistani request to buy Desert Tech sniper rifle was refused.
Click to expand...

Well Sako Trg series is one of the best long range rifle, may be your opinion is different but majority of the long shooter feel it that it is one of the best, I used AI rifle too and I was going to buy that as that the only rifle I feel is as good as TRG 22 but it's part are really expensive compared to sako.

I never used Chey Tac or Desert Tech so I cannot vouch for it, only seen video of Chey Tac on youtube, but I am going for some company training next month and might get a chance to visit colleague who have used Chey Tac.

I like sako after I started using it, is there anything wrong with it ? and why would I buy a gun which has been used in the war. I like shooting I am not a collector, to be honest I didn't get your point here. Gun used in the war would be useless for me.

One of the main reason Sako is not famous as AI because of their production, they are produced in very less number and there is always a good demand for it, you live in Canada so go to a gun store and ask them how long it will take to get a Sako and AI. Dealer will tell you it will take few weeks to order a AI and 8 to 12 month to get a Sako trg series.

The question is which sniper rifle is in use by the Indian Army. We are being distracted by discussion on Sako or any other rifle.
C

Sorry, I thought the thread was about general sniper rifle!

I got all the general information about Sniper Rifles in use with the Indian Army from another thread.

You can continue with your posts.

Actually this is the most successful sniper rifle in history....

Actually this is the most successful sniper rifle in history....
Click to expand...

The same used in Enemy at the Gates I guess.

Vasily Zaytsev had an estimated 430 kills in his life. rock127 said:
The same used in Enemy at the Gates I guess.

Vasily Zaytsev had an estimated 430 kills in his life.

He has written a very cool book, It's available online in Russian, but in English you should buy a paper copy
http://www.amazon.com/NOTES-OF-A-RUSSIAN-SNIPER/dp/1848325657
C

Not quite sure where you got your information from. But, you mentioned the Military Channel and a Top Ten list sounds like exactly the kind of thing they'd have. You shouldn't rely so much on a single source.

You don't get much more reputable than SAKO. They been making quality rifles for 100 years and their current range of sniper rifles have been very successful. If they are not the leading manufacturer, in terms of production volume and turnover, of quality i.e. expensive rifles in the world, they'd be very close to first.

The other companies you mention, with the exception of Steyr (and to certain extent Accuracy International) are just a couple of American guys in a shed.


Hari Sud said:
Since sniper rifle making skill is limited and demand high, every arms manufacturer in every country is getting into the act.
Click to expand...

Sniper rifles are just a fancy hunting rifles with bipods. Demand for sniper rifle isn't high, they are only ever purchased in same amounts and most major firearm firms can't be bothered trying to compete for a slice of such a small pie


Hari Sud said:
I like your fancy for Sako rifle. Has it seen war or is it still in the armouries gathering dust. Yes, sniper rifles are not exported, these are difficult to buy weapons. That is why Pakistani request to buy Desert Tech sniper rifle was refused.
Click to expand...

SAKO's current range of sniper rifle would be up there with Accuracy International as the most widely used sniper rifle in the world. So yes, while I don't really understand the point of your question, it's been used in action by armies and police all over the world.

And no, sniper rifles are most definitely exported. Think the point Jouni was trying to make was that the Finnish government is full of hippies. As to why Pakistan couldn't buy some military equipment, that's a long story which I'm sure you understand better than I do. As Charlie was implying, he can buy a SAKO or an Accuracy International, or all sorts of other long range "sniper" rifles from his local gun store in Canada. They're not nuclear/ chemical weapons[/QUOTE]

China swept all the five gold medals at the 14th Military and Police Sniper World Cup in Budapest on Tuesday.

Wang and China's Li Wen won the military team event with 1,858 points. As the best overall individual shooter, Wang was awarded the title of the "Best of Best" at the event. He and Li also got a special prize for the highest team score.


Guess what rifle was used by Chinese team? Right, that was the Russian ORSIS T-5000.

Someone please identify this Sniper

This one has a very interesting magazine: 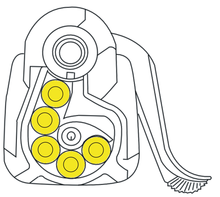