hi mate this is a old news and already a thread going on this.
check it
http://www.defenceforum.in/forum/sh...-main-battle-tank-to-enter-service-after-2010

Russia's new main battle tank (MBT), the T-95, could be exhibited for the first time at an arms show in the Urals Region this summer, the developer and future manufacturer of the tank has said.
The development of the new tank dubbed "Item 195" began at the Uralvagonzavod design bureau in the early 1990s. Russia will become the first country in the world to have the 5th-generartion MBT if the military commissions the vehicle.
"The work on the project has been conducted for many years. If the government gives us a 'green light' we will exhibit the tank at the [Russian Expo Arms 2010] arms show in Nizhny Tagil this summer," general director of the Uralvagonzavod plant Oleg Siyenko told RIA Novosti in an exclusive interview.
"I cannot disclose the characteristics of the tank, but I can assure you that we have met all the requirements put forward by the military," he said.
According to unofficial sources, the T-95 will feature better firepower, maneuverability, electronics and armor protection than Russia's latest T-90 MBT or comparable foreign models.
It will weigh about 55 tons and its speed will increase from 30-50 kph to 50-65 kph (19-31 mph to 31-40 mph).
The new tank may be equipped with a 152-mm smoothbore gun capable of firing guided missiles with a range of 6,000-7,000 meters.
In contrast to existing designs, the gun will be located in a remotely-controlled turret to improve 3-men crew survivability.
Meanwhile, the T-90 MBT, developed in the 1990s on the basis of the T-72B tank, will be the backbone of the armored units until 2025, according to the Russian military.
Russia currently produces up to 100 T-90 MBTs annually and plans to have at least 1,500 vehicles in service with the Ground Forces.

It will be interesting to see the price tag. More and more it gets more suspicious about weapons from Russia, especially after the test result between Arjun and T90. Maybe I am biased. But the curve of Russia's arm development is really not giving the impression of heading up.

rapidkiss said:
It will be interesting to see the price tag. More and more it gets more suspicious about weapons from Russia, especially after the test result between Arjun and T90. Maybe I am biased. But the curve of Russia's arm development is really not giving the impression of heading up.
Click to expand...

Forget the pricetag, I'm waiting for the video of this new "super tank."
S

It will be interesting to see how the russian put a 152 mm gun on a tank, keeping weight around 50 ton. Below I have enclosed a nice comment from "abovetopsecret.com" on Sheridan.
Though T95 weight will be higher than Sheridan same type of problem may pop up.

{The M551A1 Sheridan was a lightweight, airtransportable, amphibious, do everything armored vehical, that was to be the last word in high tech excellence... except that it didnt work.

It was armed with a 152mm smoothbore cannon that used caseless rounds (the idea that caseless=lighter, could carry more ammo), and did double duty as a wire guided missle launcher. Problems came up when it was found that the missle didnt work very well, and was scrapped in favor of the TOW missle. Also, it was learned that the caseless ammo was very hazardous to the crew, as it was very easy to ignite inside the hull: any armor penetrations would usually set the ammo off, killing the entire crew, even if it would have been 100% survivable in an older tank.

In addition, they found out the entire tank was way too light to withstand the recoil of the gun, and when fired extensively, it basically shook itself to pieces. }
Last edited: Mar 28, 2010

Russia knows the T-90 is obsolete and has been looking for a new tank since before its induction. The T-90 was a budgetary compromise that had to be made because an FX tank wasn't affordable. It took the best of T-72 and T-80 and put that into one, but nothing new. Russia always planned to stop T-90 once the FX tank hit production. It has just been their terrible economics and corruption that have stopped it.

its funny you would talk .. after we all know what kinda thermals the french produce bah!!

notinlove said:
its funny you would talk .. after we all know what kinda thermals the french produce bah!!
Click to expand...

Its funny you would talk considering it was Russia who didn't integrate the sights before hand. Thales sold to Russian specification. bah!

I feel it (the T-95)shall look similar to the only other unmanned turret tank in the world today, i am talking of course about the Jordanian upgrade of the Challenger 1 with the Falcon turret(with a bigger gun though)
pictures follow below 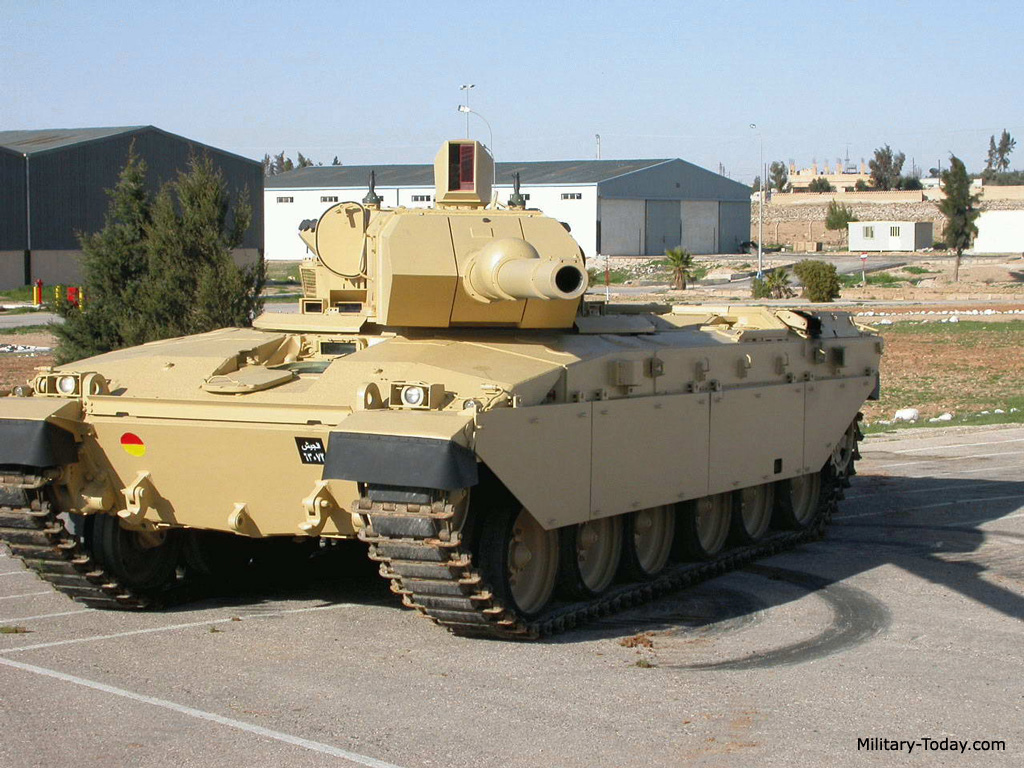 one more with the falcon turret

Russia will be soon showcasing a new generation Main battle tank in mid of 2010, Known has “Item 195″ and the T-95, and this new model has been under development for many years. Details still remain classified. It has been in developed at Uralvagonzavod, where it will also be mass-produced. Russia will become the first country to unveil a fifth-generation tank this tank is expected to surpass all of its predecessors and rivals.Despite the secrecy surrounding the T-95, some information has been leaked. It appears that the new tank will weigh about 55 metric tons and that it will have a remote-controlled turret with 152-mm cannon capable of firing conventional rounds and guided missiles. T-95 is armed with 135 mm gun with a smooth barrel. Russian tanks commonly used 125 mm tank gun west of 120 mm. Russians claim that more guns will achieve higher muzzle velocity and ensures a higher likelihood of puncture armor of all modern tanks. Vehicle dimensions are comparable with the known dimensions of battle tanks T-72 T-80 and T-90. However, the design of the tank T-95 is considered revolutionary. All the main weapons are mounted on a rotating turret unmanned. This requires a fully automatic charging system. Is a three-member crew of the tank? The driver, gunner and commander are installed in a specially armored space in front of the hull. Space is separated from the revolving tower and an ammunition compartment. Crew protection on the tank will be emphasized to a far greater degree than ever before in any Russian tank designs. The level of crew protection should ensure its survival when the tank is hit by any anti-tank munitions from any aspect or angle, thanks to the crew placement in a unitary armored pod inside the hull. A unique drivetrain suspension system is being tested on this tank that to a certain extent extinguishes the hull vibrations and stabilizes its position. Construction of the tank is known for its low silhouette which makes the T-95 tank on the battlefield less vulnerable.
Features
-Diesel-electric propulsion
-135mm gun
-360° sensors and ECM and network-capability
-pro-active electric reactive armor
-Weight > 55 tonnes
-ceramics&fiber armor instead of steel
-virtual reality for the driver and gunner
-only two guys are sufficient to man it
-autoloader for three different types of ammo

don't know how credible this news is but:

The main victim is the mysterious Object 195 program that was aimed to develop a new generation main battle tank to replace existing T-80 and T-90 tanks in the Russian Army. The new tank also dubbed T-95 has been developed by Nizhny Tagil Uralvagonzavod armor manufacturer in complete secrecy for more than 15 years. Popovkin said the military will focus on modernization of the T-90 instead.
Click to expand...

nitesh said:
don't know how credible this news is but:

Doesn't look very credible to me. BMD-4 and Sprut are already in production.

Armand2REP said:
Doesn't look very credible to me. BMD-4 and Sprut are already in production.
Click to expand...

Deputy Minister of Defence - Chief of armed forces of Russia Vladimir Popovkin yesterday described the closure of a number of development works (ROC) and production of armored vehicles. Ceased funding for the "Object 195" - an experienced main battle tank, once seen as a promising (work on it were more than 15 years in complete secrecy). Closed on the ROC barreled 152-mm self-propelled guns "Coalition-SV". Have ceased work on the project Burlak "- a new turret with a unified fighting compartment, which could be installed on new tanks as well as on the old T-72 T-80 and T-90 in their modernization. To be made whole military equipment will not be. In addition, Mr. Popovkin said that the program of the state defense order does not stop entered contracts for combat vehicle BMD-4 airborne "Bakhcha-U, 125-mm self-propelled antitank gun" Octopus-SD and tank support combat vehicle BMPT. Purchased, they will not, but the manufacturer has already paid the actual expenditure for the few samples that they still managed to do. An expert in vehicle colonel Viktor Murakhovski Defense calls the decision "totally justified". "All this technology was created in Soviet platforms and is already outdated, - says Mr. Murakhovski .- In modern conditions necessary to develop a completely new combat vehicles.

So WTF are they going to build?

That just Turned out to be a Whole lotta BS ,
that post from aviation week was just a blog , that too someones first blog safe to say it was not accurate and deliberate.

here are few links to the actual press conference that happened on that day , and none of it mentions anything, i dunno where did kommersant came up with it from , when all other newspapers reporting the same press conference havent said anything.

Again, your links only talk about T-90, not about anything else discussed.

Here is the confirmation from the round table I just watched.

That's why the generals decided to abandon the "Object 195" - the new main tank, work conducted in absolute secrecy for more than 15 years of double-barreled self-propelled 152-mm guns of the Coalition-SV ", from a new turret to replace them on the tanks T 80 and T-90 from the tank support combat vehicle (BMPT), which has never appeared in the army, although brilliantly manifested itself in various international exhibitions, and even from airborne combat vehicle BMD-4 "Bakhcha and 125-mm self-propelled guns" Octopus-SD, which participated in last year's parade on Red Square ... All of this technology, they say the military, created in Soviet times and is now obsolete. And it is because instead of purchasing it on the Russian defense industry enterprises in the management of Defense rely on foreign countries. Already, there are buying tank night sights, sniper rifles, and even engines for ships and avionics for military aircraft 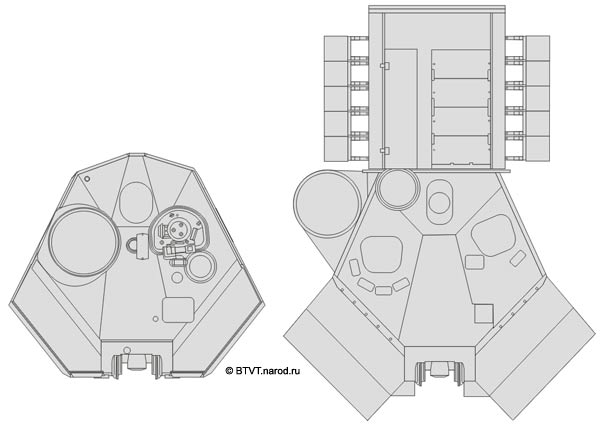 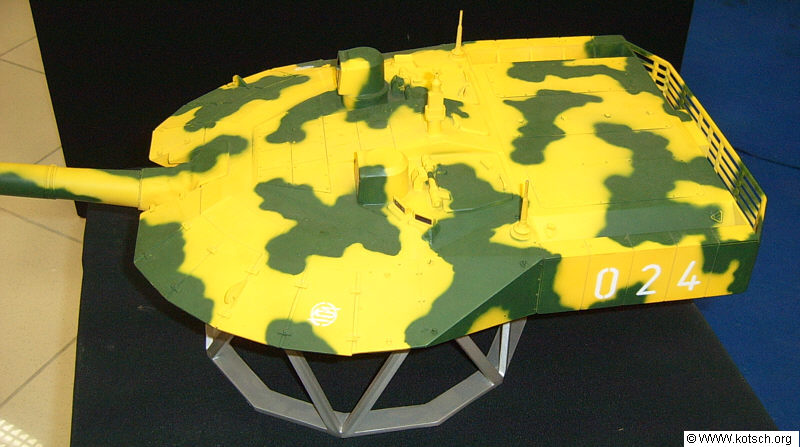 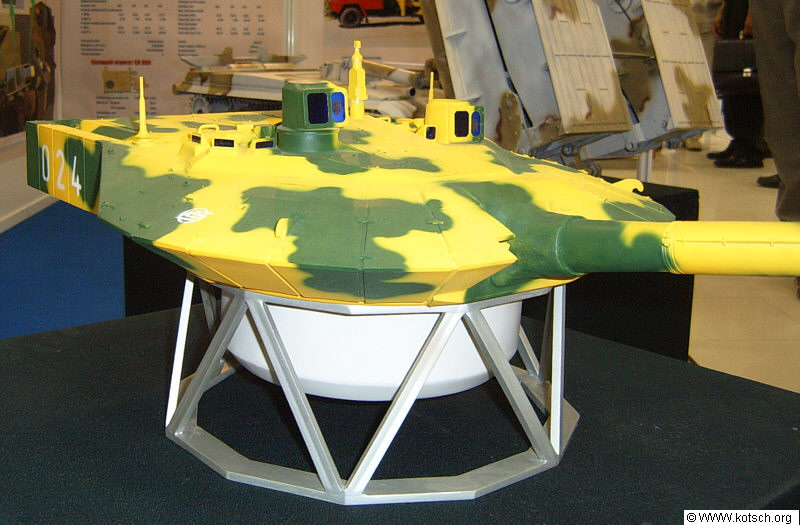 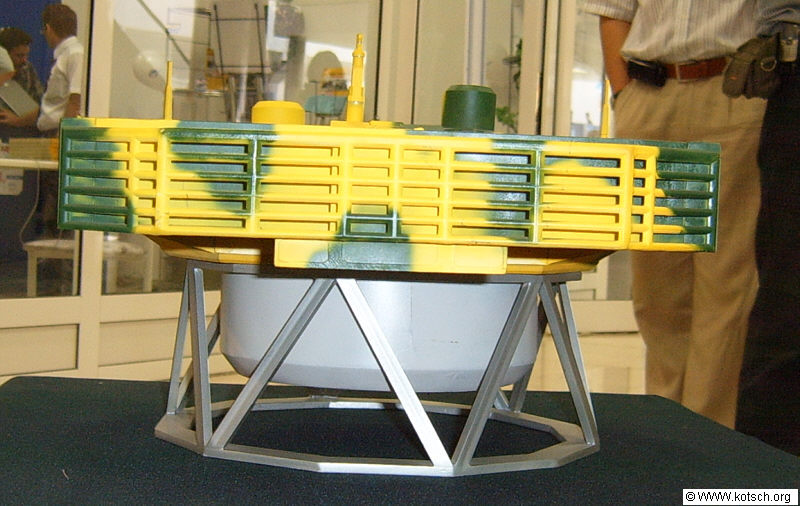 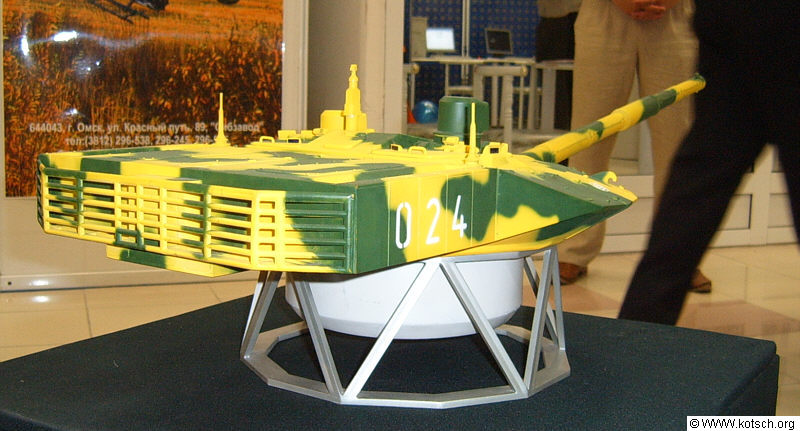 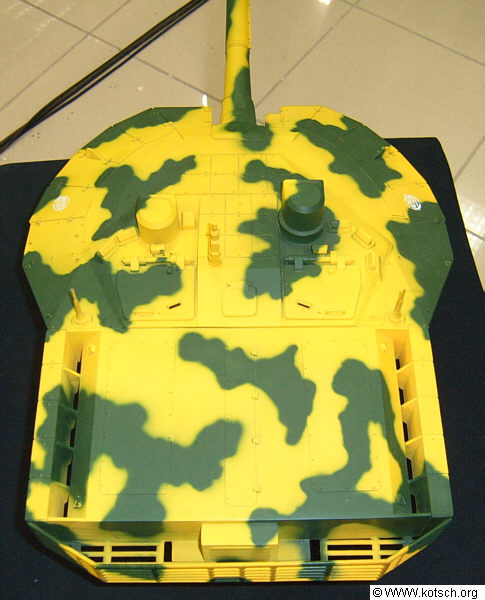 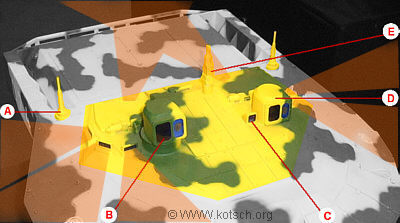 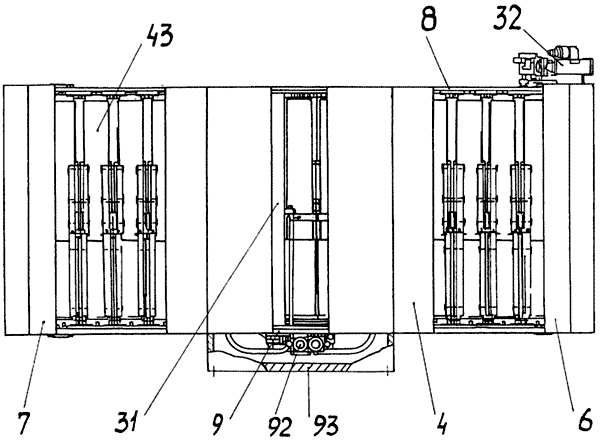 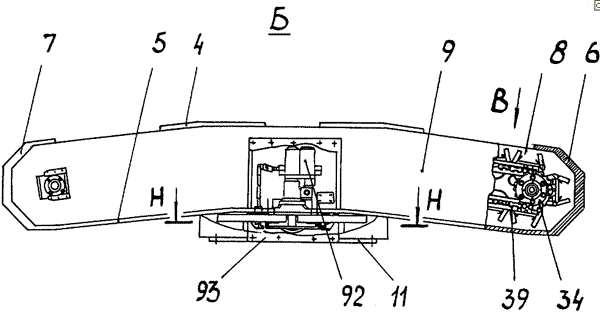 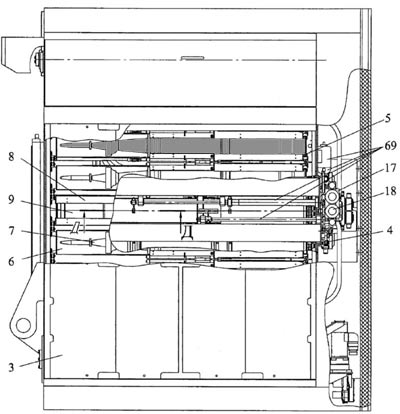