PM to be Chief Guest at French National Day

Reflecting the closeness in Indo-French ties, Prime Minister Manmohan Singh will be the Chief Guest of Honour at France's National Day on July 14, becoming the first Indian leader to have such a rare honour.

Singh, who will visit Paris on his way to Sharm-el Shaikh in Egypt for the NAM Summit, has been extended the invitation by President Nicolas Sarkozy.

Sarkozy was the Chief Guest at the Republic Day last year and his invitation to Singh is a gesture of reciprocation.

"This is a symbol of close partnership between the two countries, partnership which is at the service of peace, stability and development," French Ambassador to India Jerome Bonnafont told a group of reporters here.

France does not have the custom of inviting foreign heads of governments or states to be the Chief Guest and only on few occasions is this honour bestowed on foreign leaders.

A contingent of 400 soldiers from the three Defence Services of India will also participate in the French National Day Parade to be held on the occasion in Paris. This will mark commemoration of Indian army's association with its French counterpart during the two World Wars.

At this year's celebrations, Cambodian President Hun Sen, who will be on a bilateral visit to France, will also be the Guest of Honour along with German President Horst Kochler.

During the visit, Singh and Sarkozy will have 'working' lunch discussing ways to meet the bilateral trade target of 12 billion Euros in the face of the global economic crisis.

They badly want the Rafale to win the MMRCA contract.
Y

and also the next Submarines and Frigates order

But it is a great honour. And a foriegn contigent marching along with the national army is the greatest pride bestowed upon us. This must be appreciated. This will go down in history. Leave aside Rafales the subs and the frigates. This is about hounour and a symbol to the world that we have arrived and we are becoming huge.
Y

Indian troops will take part in France's Bastille Day military parade, the first time India has taken part and an indication of the growing ties between the two nuclear powers.

A 400-strong detachment of Indian troops are to march down the Champs Elysees as part of the celebrations on Tuesday, under the eyes of Manmohan Singh, India's prime minister.

France has been building closer ties with India and is seeking contracts to supply weapons and civilian nuclear technology.

The office of Nicolas Sarkozy, France's president, said that the troops' presence shows France believes "India has a primary role on the international scene, and that we support India's candidacy to become a UN Security Council permanent member".

Drawn from the army, navy and the air force, the contingent will parade to the sound of Indian martial music played by a 90-member band as they march alongside thousands of French soldiers.

Sitanshu Kar, an Indian defence ministry spokesman, said last week: "It is a proud day for India as our troops will march in a country where they fought during World War I."

Indian soldiers under British command were part of two Allied divisions that fought the Germans around the northern French town of Neuve-Chapelle in 1915.

Singh, who was in Italy for the G8 summit, was invited to attend the July 14 French national holiday event as guest of honour by Sarkozy, who attended India's Republic Day celebrations in January 2008.

Singh last travelled to Paris in September 2008 to sign a major deal on civil nuclear co-operation between the two countries.

French state-controlled group Areva has signed a draft accord for the sale of up to six nuclear reactors to India, a huge new market now open after a nuclear trade embargo on New Delhi was lifted.

France is one of the key arms suppliers for India's technology-hungry military, and the French firm Dassault Aviation is in the race for a mammoth contract to supply 126 fighters to the Indian air force.

A jet contract could be worth up to $12bn.

France and India have been steadily developing strong military ties.

In April the Indian and French navies took part in anti-submarine exercises off the coast of the western state of Goa.

The Bastille Day parade, one of the capital's biggest annual events, lets France show off its military hardware. This years celebrations will end with parachutists being dropped onto the Champs Elysee.

The parade is held each year on July 14, the anniversary of the storming of the Bastille fortress in Paris by revolutionaries on July 14, 1789.

It was the symbolic starting point of the movement that led to the first French republic.

He gets to sit next to Carla Bruni!! 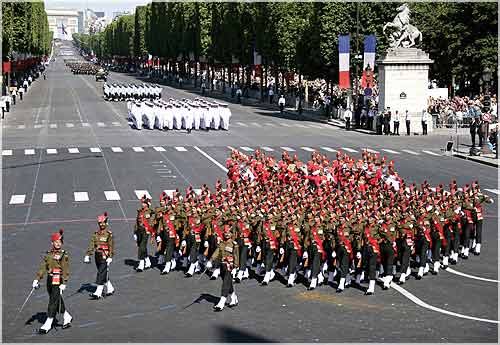 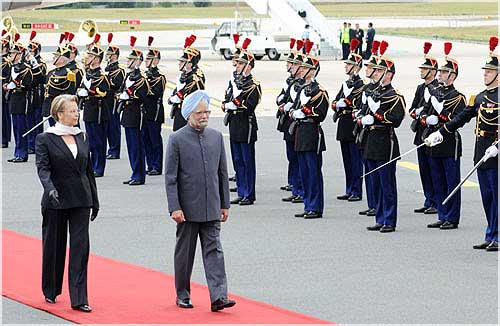 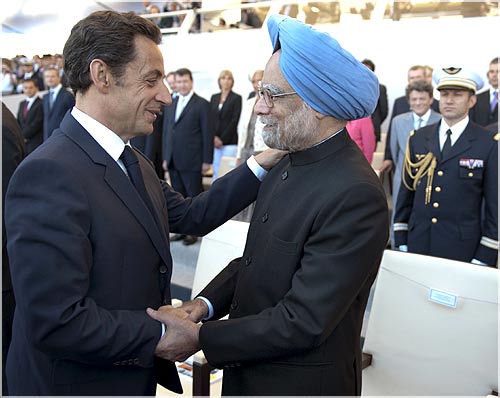 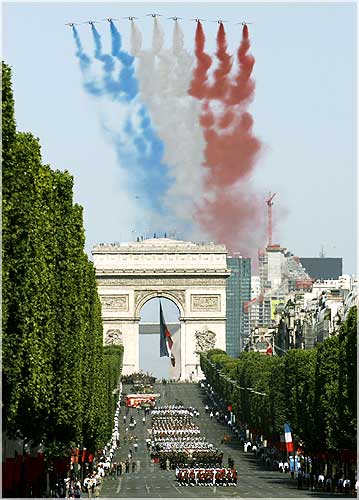 About 400 Indian soldiers headed the colourful march down the Champs Elysees, under the gaze of Singh and French President Nicolas Sarkozy, while French military aircraft roared overhead.

The two men held a working lunch, where they discussed trade, including defence and nuclear energy projects.

"France loves India," Sarkozy told guests on the lawn of the Elysee Palace after the talks.

India plans to spend more than $30 billion over the next five years on modernising its largely Soviet-era weapons systems and has launched an ambitious civilian nuclear energy programme worth billions of dollars.

France has already secured a slice of the nuclear cake and is eyeing lucrative defence contracts, working hard to improve ties with India which has traditionally had closer relations with its former colonial ruler, Britain.

"I hope that we can deepen our strategic partnership in all possible ways ... so that we can write a new chapter in the history of the world," Singh said, standing alongside Sarkozy.

As part of its military plans, India is looking to buy helicopters, radar and 126 multi-role warplanes in what promises to be one of the world's biggest defence deals.

France's Dassault Aviation is bidding to sell its Rafale fighter plane to New Delhi and a source close to Sarkozy said on Tuesday there would be test flights later this year. Among other contracts under review were the modernisation and renovation of about 50 Mirage combat planes operated by India.

"Both sides want to deepen their industrial cooperation in the defence sector," the presidential source said.

Sarkozy and Singh discussed atomic energy and were "happy that things continue to progress", the source said.

France's Areva claimed a first victory in the race to grab a share of India's nuclear market in February, signing a preliminary accord worth more than 8 billion euros ($11.19 billion) to build up to six atomic reactors.

Sarkozy has gone out of his way to woo New Delhi since taking office in 2007 and last week said India, along with other developing countries, should always be part of Group of Eight summits.

Inviting India to lead the Bastille Day parade was seen in France as a major honour and an indication of the warm ties between the two countries.

The parade is one of the grand occasions in the French calendar and marks the storming of the Bastille fortress in 1789, traditionally seen as the start of the French revolution.