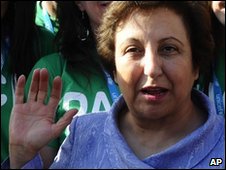 The 2003 medal and the accompanying diploma were taken from a bank box in Tehran about three weeks ago, she said.

The Norwegian foreign ministry said it was "shocked", describing the confiscation as the first time national authorities had taken such action.

Ms Ebadi has criticised Iran's disputed election earlier this year and the subsequent treatment of protesters.

In Norway, where a committee chooses the annual recipient, Foreign Minister Jonas Gahr Stoere said: "Such an act leaves us feeling shock and disbelief."

The ministry summoned Iran's charge d'affaires to protest about the confiscation.

Iran has not made any official comment on the issue.

The Norwegian ministry was also concerned about the alleged beating of Ms Ebadi's husband in Tehran, with Mr Stoere saying the "persecution of Dr Ebadi and her family shows that freedom of expression is under great pressure in Iran".

The result of June's election, in which President Mahmoud Ahmadinejad was re-elected, saw thousands of people protesting for several days, with hundreds arrested.

Ms Ebadi said Iranian authorities had also demanded taxes on the $1.3m she was awarded, but that the prize is exempt under local law, AP said.

She left the country the day before the 12 June election for a conference and has not returned, although she said the "threatening messages" she had received would not deter her.