lixun said:
No, at first it was the J7 upgrade plan, also called the Super Seven Plan. Pakistan provided funding, the United States provided the engine, and China and the United States jointly designed it. However, after the Cold War, the United States Grumman withdrew from the plan, and then Pakistan also terminated the plan. China did not want to To let this nearly completed aircraft abolish, China decided to develop its own independent development. When the Singapore Air Show, China showed its research results to Pakistan. At this time, Russia was willing to provide engines, the project restarted, and Pakistan wanted to purchase Italian radars, but the project would be postponed. After that, China showed the Chinese radar to Pakistan, which has the same performance as the European radar, which did not delay the project.
If it weren’t for China, no airline would provide JF17 at such a low price. JF17 would not be completed at all. Pakistan’s China-Pakistan joint development is wrong. Pakistani pilots have basically no influence on the development of JF17.
Click to expand...

J7 is an interceptor.

Srinivas_K said:
J7 is an interceptor.
Click to expand...

To be precise, it is a frontline fighter. In that era, all aircraft were pursuing higher speed and higher altitude. The Soviet interceptor should be su17.

Okay so dejainar wuz also Chicom, so what exactly is Pindigenous in this Jadeed Tareen Taiyyara?

FalconSlayers said:
Okay so dejainar wuz also Chicom, so what exactly is Pindigenous in this Jadeed Tareen Taiyyara?
View attachment 108751
Click to expand...

Fake news. All of Jadded Tayara is manufactured in Paxtan 100% including engine 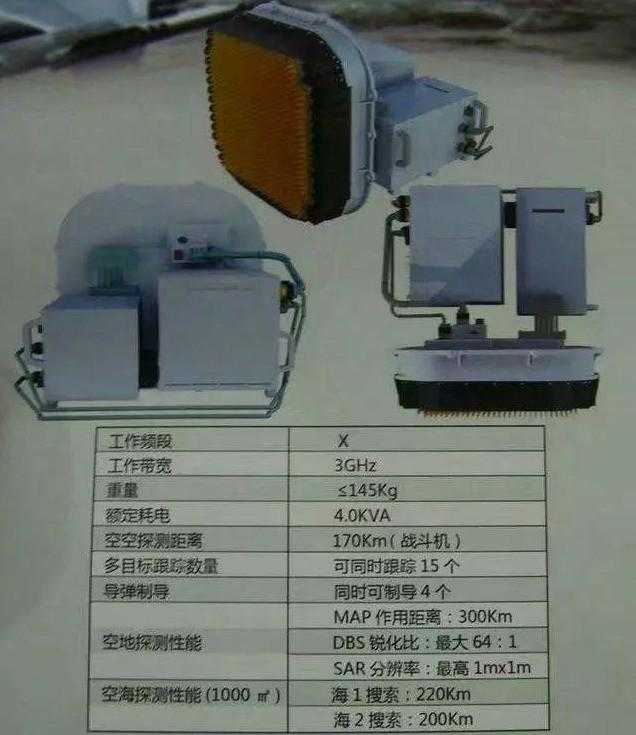 It is rare to see the data written on the JF17 AESA advanced radar. It is a pleasant surprise. Its working band is around 10GHZ X band, working bandwidth is up to 3GHZ, and its fractional bandwidth FBW reaches 0.3 level, which exceeds the 0.25 required by ultra-wideband radar. Such a large working bandwidth can not only provide extremely high range resolution, and recognize the shape characteristics of ground vehicles, air fighters, etc., but also have strong anti-jamming capabilities and low interception capabilities. Traditional narrow-band targeting jammers such as EA18's ALQ-99 pod can hardly interfere with it effectively, while traditional broadband sweep frequency jammers such as SPS-141 pods will also lose their large bandwidth frequency agility function. effect. In order to effectively counter this type of ultra-wideband radar, the jammer must also have the ability to work with large bandwidth and strong aiming and frequency interference capabilities. 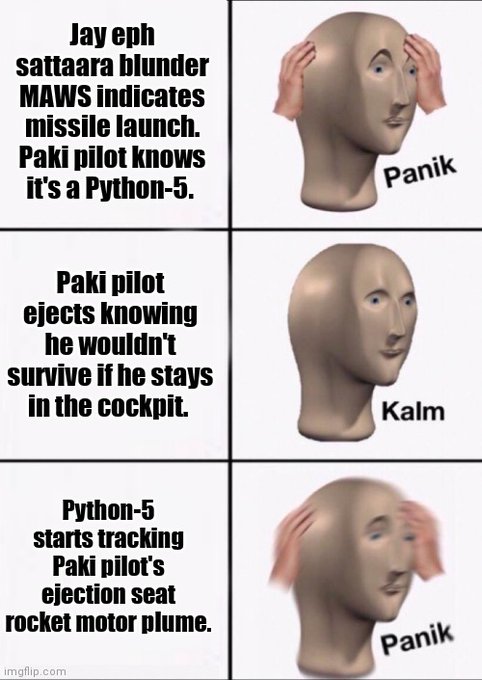 How many of you know of Avi Das?

THE EVOLUTION OF AN 'ORIGINAL' FIGHTER

Got into a discussion/argument with Defense Matrix, on twitter as to what JF17 is derived from. One will need to look at the evolution history of JF 17 to find its sources of development.

The genesis of JF 17 started with Pakistan's Project Sabre II. This project was started in 1987. Note, JF 17 was started way before LCA Tejas. The Project Sabre II phase is something the Pakistani deriders of LCA on account of purported long development cycle, wilfully skip.

PAF wanted to develop a feasible and low-cost multirole combat jet based on an existing design—the Chengdu F-7 Skybolt, a Chinese variant of the MiG–21PFM. In January 1987, PAF commissioned Grumman Aerospace to conduct studies and assess the feasibility of the Sabre II design concept with Pakistani specialists and the Chinese Chengdu Aircraft corporation. Under Project Sabre II, which the Chinese called Super-7 project, the F-7 airframe was redesigned with angled air intakes on the sides of the fuselage so a solid radome nose could house radar and other avionics from Northrop's F-20 "Tigershark" fighter.

The program was partially funded by Pakistan, which was considered as the main potential customer. The fighter was offered as a low-cost alternative to the F-16 to meet Pakistan's 150-aircraft requirement to replace Chinese-supplied F-6s (MiG-19s). The flyaway cost will be $8-9 million.

Grumman completed a five-month feasibility study in 1987. The American firm had performed preliminary studies and wind tunnel aircraft models. Grumman, China's Chengdu aircraft factory, China Aero Technology Import-Export Company, the Pakistan Air Force and the Pakistan Aeronautical Complex (PAC) promoted the F-7 modification. Chengdu would build the revised rear fuselage to a Grumman design, while the US company would build the new forward fuselage. PAC would assemble the aircraft. Several other Western companies were in competition to supply the engine and avionics. Initially, GE404, the very engine that powers Tejas, was chosen.

However, around this time, USSR withdrew from Afghanistan. US, seeing the diminishing of Pakistan's utility, didn't feel any further obligation to prop up Pakistan. Within a year China conducted the Tianamen Square Massacre. US also got to know (or rather they could now acknowledge) Pakistan's clandestine nuclear program. They completely withdrew from the project. The project was left in a limbo.

In the meanwhile, Romania was developing its IAR 95 Spey, as a project to produce a supersonic fighter jet for the Romanian Air Force. The project was started in the late 1970s and cancelled in 1981. Initially the project was supposed to use the engine from the Mig-23 (Tumansky R-29-300), but they couldn't get licence. Then they, naively, tried to buy licence for the British Spey engine, that was powering the British F-4s, but couldn't get that one either, so the project was cancelled.

Shortly after, the project was restarted again. Romania, which had old relationship with China, was looking at the Chinese version of the Mig 21 engine. Towards this China had access to the Romanian designs, so as to study the feasibility of marrying their engine. However, that went to naught. The Chinese did see that this was a design which was more evolved than their own Super 7/ Sabre II initiative.

Romania now looked back again at Russia towards its Klimov RD-33 turbofan engines, which powered its Mig 29s. However, Romania finally came to the conclusion that it just didn't have the budget to develop the plane on their own. The project was cancelled for good in 1988 due to lack of funds.

Given that the US was out of the picture, China was busy buying up as many plans and technical details that it could from all over Eastern Europe. The fact that they got the details of Avi from Israel is well known. But, it getting the IAR 95 details are well within its realm of possibility.

By 95, Soviet Union had collapsed, and Russia was willing to sell anything and everything. China had already settled on Lavi for its single engine fighter solution and the Su 27 for its double engined fighter. It still had the IAR 95 plans, and they knew that Romania had settled for the Klimov engine to power it.

Russia, or rather USSR, had been developing its own answer to the F16. Towards it Mig had developed a concept called the Mig 33, which had belly placed intake ducts and powered by a single Klimov RD 33 engine. This they had to abandon with the collapse of the Soviet Union. Meanwhile, PAF still needed its single engine aircraft to replace its stock of F7s. China proposed that they could create a fighter now, possibly more evolved than the Sabre II project, given that they seemingly had the IAR 95 plans. All they needed was some hand holding with the engine, which Russia was willing to provide.

In 1995, Pakistan and China signed a memorandum of understanding (MoU) for joint design and development of a new fighter, and over the next few years worked out the project details. Also in June 1995, Mikoyan had joined the project to provide "design support" towards the integration of the engine. This also involved the secondment of several engineers by CAC. Thus the data for the single engine fitment of Klimov RD 33 for Mig33 was purchased.

The final JF 17 had all of IAR 95's design, but for the angled air intake it had devised for Sabre II. The early JF17 wings were closer to the near delta wings of the F7 but later evolved more towards IAR 95. Also, instead of the boundary layer separator intake of IAR 95, it got a DSI 'cos, by now, China was back in US good books thanks to 9/11 and had stolen the data from the US.

This is the tale of the evolution of Pakistan's 'original' fighter.

So what do you think of it? 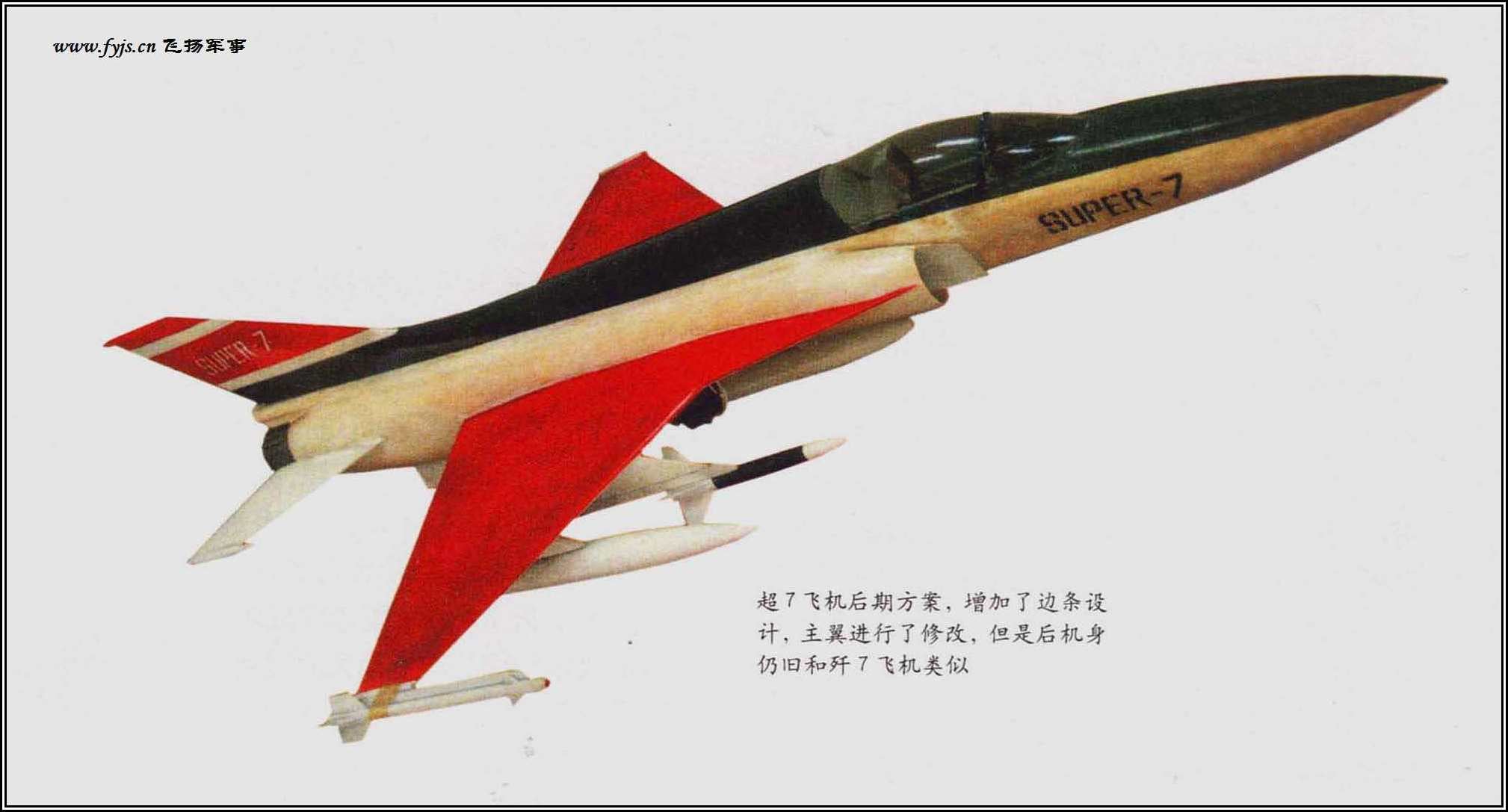 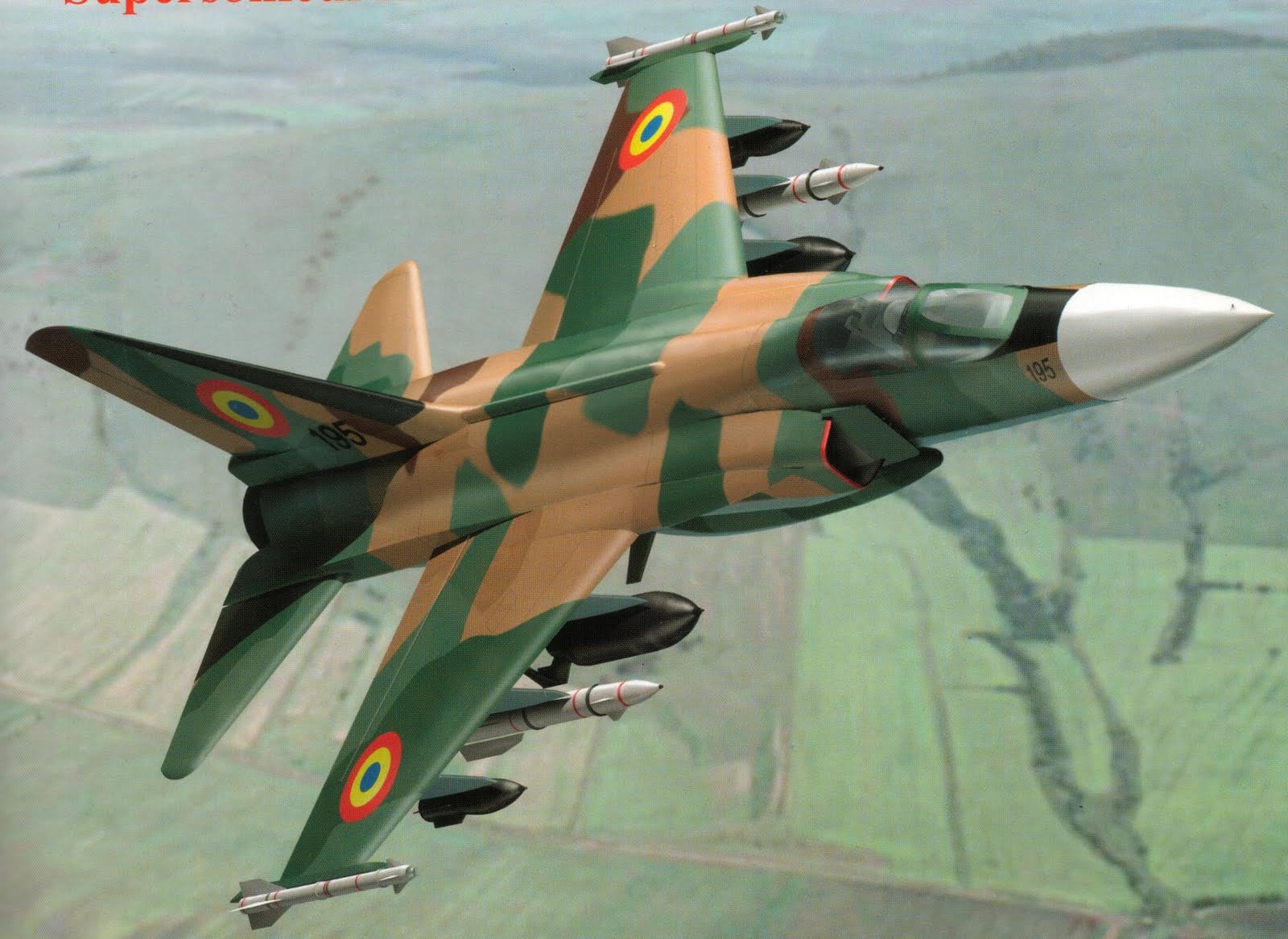 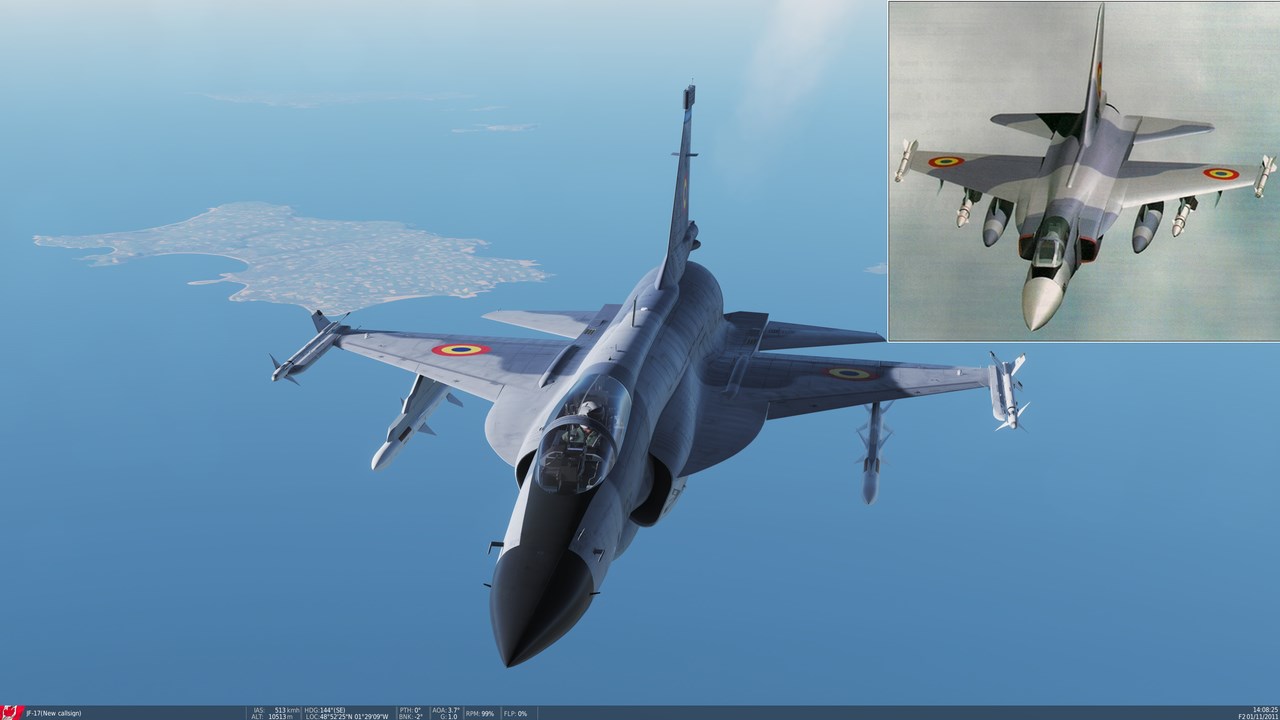 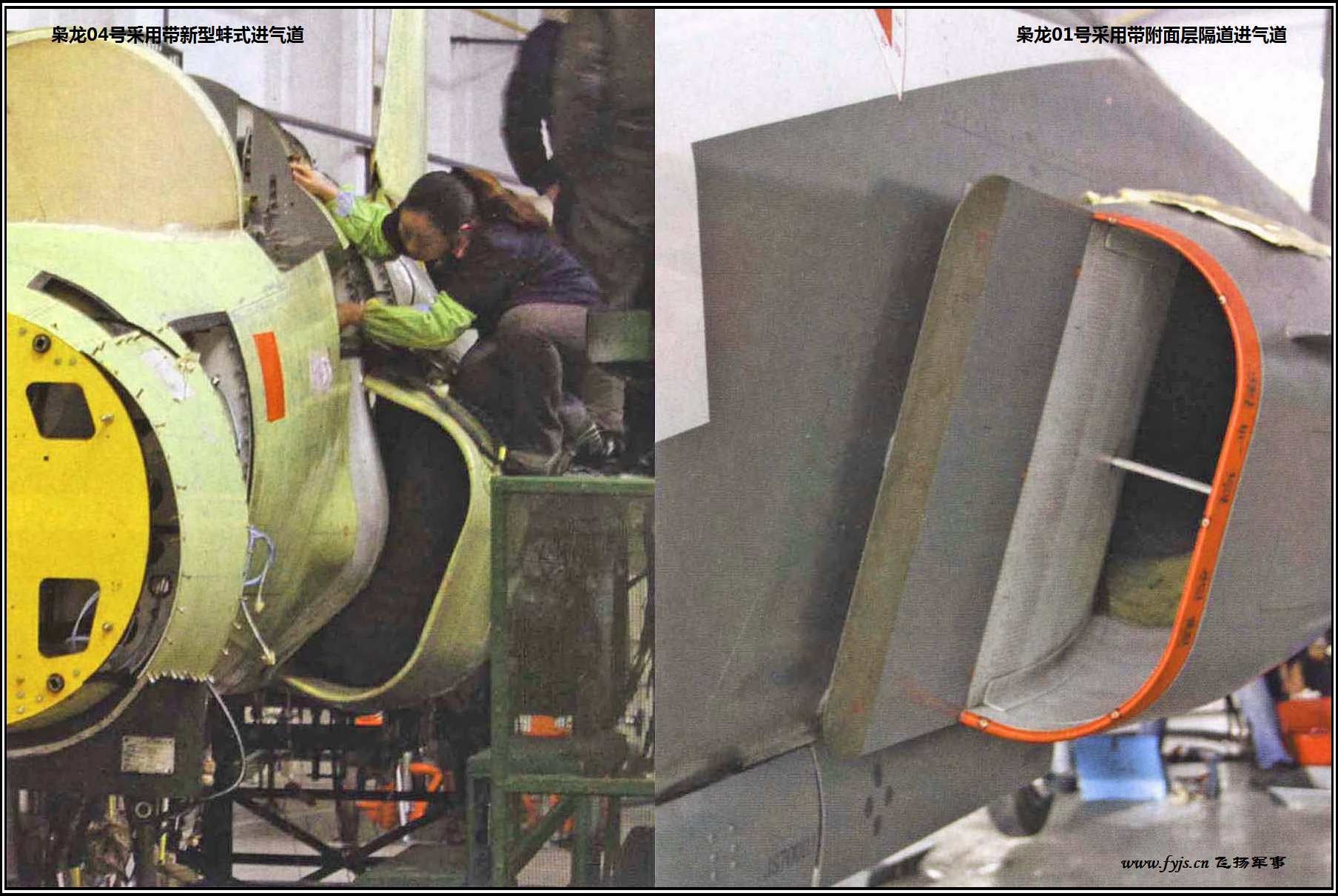