A teacher from the Republic of Ireland has been turned down for a job in South Korea due to the "alcoholism nature" of Irish people.

Katie Mulrennan, from County Kerry, had applied for a teaching job in Seoul.

She was told by an agency that their client did not hire Irish people due to their perceived drinking habits.

The 26-year-old told the BBC that she could not believe the email was real at first.

"Usually when you apply for a job and they don't want you, they don't send a reply," she said.

"Or they tell you they would prefer someone from North America, because some schools prefer the accent.

"But this reply was a first. When I got the email, it was so abrupt and short. I actually laughed when I read it initially.

"But then I wanted to write back a really angry response.

"In the end I took a deep breath and sent back a reply, that was a little bit sarcastic as I couldn't believe the email I had received. But I haven't heard anything back since." 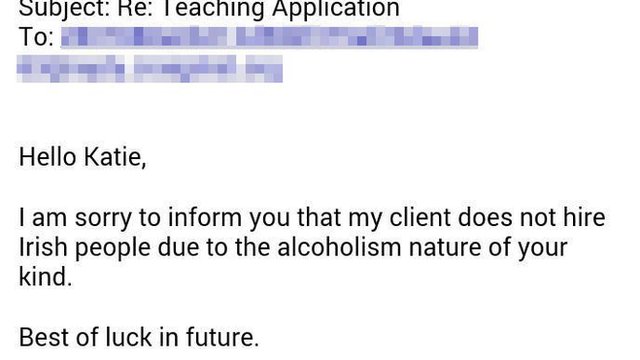 The teacher had emailed the application when a job was advertised on listings website Craigslist in September.

She told the agency that she had been teaching English for over three years, in Barcelona, Oxford and Abu Dhabi as well as South Korea.

Last week, she received a reply that said: "I am sorry to inform you that my client does not hire Irish people due to the alcoholism nature of your kind".

Ms Mulrennan said she did not know who the recruiter was as their details were not listed on the site.

However she has reported the advertisement to Craigslist.

"It was disappointing because these employers did not even get to see me," she said. "They never spoke to me and didn't get a chance to hear what I sounded like."

The English teacher has since found a job and said that she can laugh about what happened.

"I was annoyed about it. But I can also see it was a little bit hilarious as well. A friend saw it and encouraged me to post it online as it might go viral.

"I thought: 'Really? It's just another silly thing poking fun at Irish people'. But then I put it online and people started getting in touch.

"I still love the country and being in Seoul."