Indian woman accused of killing daughter over affair with stepbrother 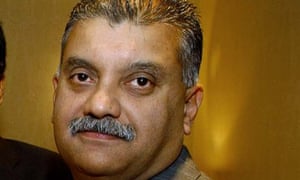 Peter Mukerjea, whose wife has been arrested on suspicion of murder. Photograph: Martin Godwin for the Guardian
Agence France-Presse

A former media executive in India has been arrested on suspicion of murdering her daughter for having an affair with the executive’s stepson.

Indrani Mukerjea is accused of strangling Sheena Bora, dumping her body in a forest in western Maharashtra state and setting it alight in 2012.

“We have arrested two accused, the other is her driver Shyam Rai,” said the deputy police commissioner Dhananjay Kulkarni. “After they appeared in court we got custody until 31 August.”

Kulkarni said a third suspect, Sanjeev Khanna, reported to be a former husband of Mukerjea, had been arrested in Kolkata, in West Bengal state, on suspicion of involvement in the murder.

“We are trying to get remand from a Kolkata court to bring him to Mumbai. We’re hoping he will arrive this afternoon,” Kulkarni said.

Mukerjea, a co-founder and former executive of the Mumbai-based television company INX Media, is currently married to Peter Mukerjea, a former Star India CEO, who is believed to be her third husband.

Indian media widely reported Khanna to be Indrani Mukerjea’s second husband, while the victim was her daughter from a previous relationship.

India’s newspapers and TV news channels have been abuzz with details of the scandal, with many carrying complex family trees illustrating who’s who in the case.

Kulkarni said new information had come to light that led police to make the arrests more than three years after the killing.

Police believe the motive for the killing was Indrani Mukerjea’s dislike of her daughter’s apparent relationship with Rahul Mukerjea, Peter Mukerjea’s son from a previous marriage, Kulkarni said.

“It was an honour killing because Sheena was having an affair with Rahul, which was not liked by Indrani,” he told AFP. “The prima facie evidence suggests this was the reason for the murder.”

So-called honour killings are still carried out in India when families disapprove of relationships, to protect what is seen as family pride.

Bora, 22, was killed in April 2012 and her burnt body was discovered the following month in woods near the town of Pen, according to Kulkarni. “She had been strangled and petrol had been poured over the body before it was set on fire,” he said.

So what was the age of Aisha when she was forcefully married to old Mohamad? What is the correct word for this ACT in English?

locking this thread as this is heading down the drain.