Indian Army orders 36 Pinaka MLRS units
As a part of the extensive modernization of their equipment, the Indian Army will receive 36 Pinaka Multiple Launch Rocket Systems. They will replace the BM-21 Grad rocket launchers in their arsenal. The indigenously designed and built 214 mm MLRS are mounted on an 8×8 truck and can fire a salvo of 12 rockets at a distance of 40 km (Mk1) or 70 km (Mk2). A future variant with 120 km range and GPS guidance is under development.

These rocket launchers will be more useful than conventional shell artillery in short, intense conflicts, where a massive amount of firepower in a short duration can knock the adversary off their hinges. Each rocket can have a customized warhead depending on the target it is to be used against. The 36 launchers will be divided into 2 artillery regiments of 18 launchers each, with each regiment containing 3 batteries of 6 launchers. The Indian army plans to induct over 22 regiments by 2025.

What are the types of warheads in these missiles?
Additionally, the Indian Army had mentioned that some problems needed to be ironed out in these systems. Can you elaborate on a few of them?

Shashank Sharma said:
What are the types of warheads in these missiles?
Additionally, the Indian Army had mentioned that some problems needed to be ironed out in these systems. Can you elaborate on a few of them?
Click to expand... 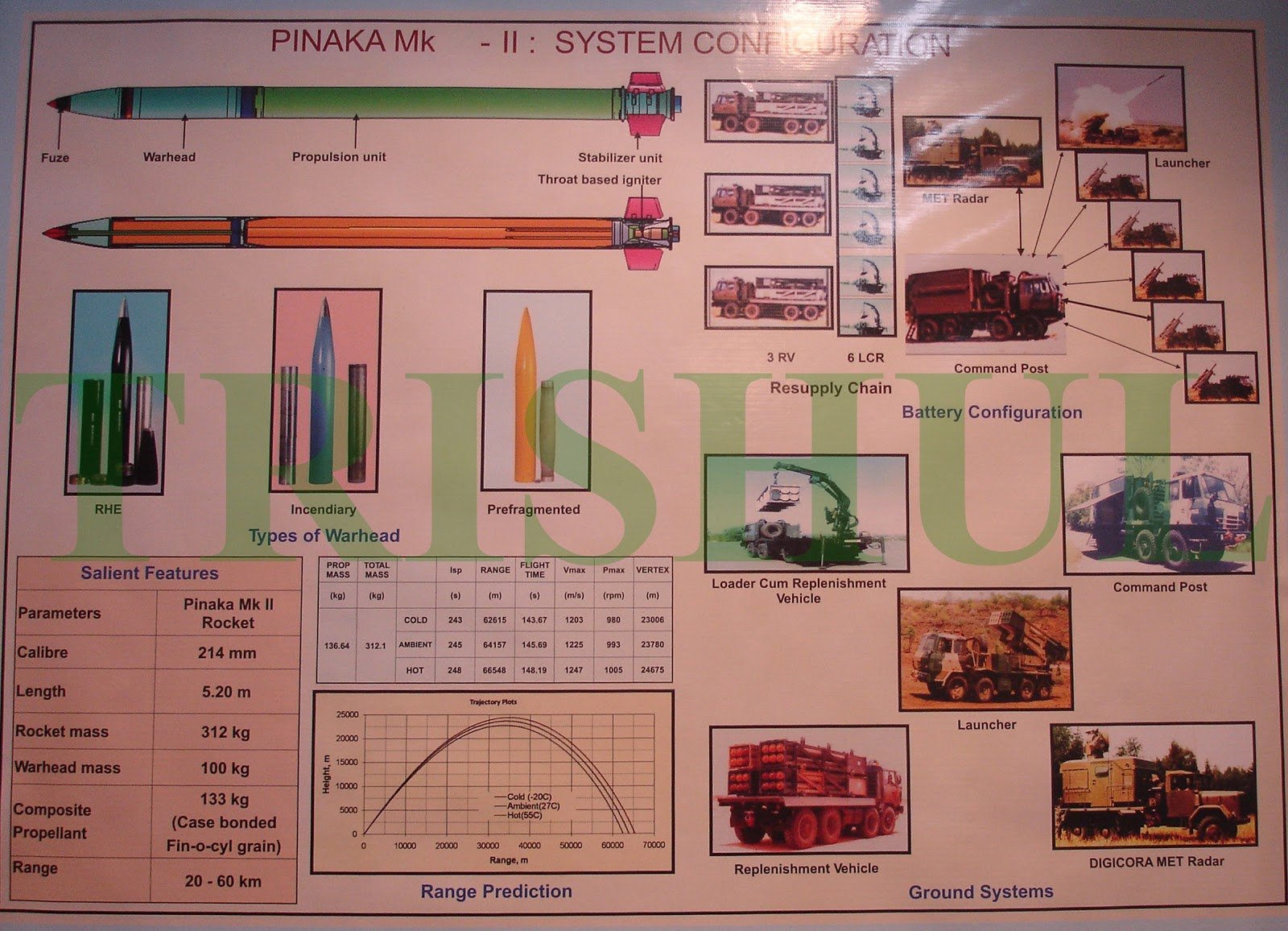 How many units will be needed to flatten Lahore?

LordOfTheUnderworlds said:
How many units will be needed to flatten Lahore?
Click to expand...

Why Lahore? We need to flatten Rawalpindi!

Mikesingh said:
Why Lahore? We need to flatten Rawalpindi!

Naaw, I want Mirpur in PoK to be carpet bombed.

Project Dharma said:
Naaw, I want Mirpur in PoK to be carpet bombed.
Click to expand...

We have already 3 Brahmos Regiment in border. Pinakas should be used to counter battery firre. First open Dhanush and Bofors, track Pakistani artillery if they are replying then fire Pinakas. I think this Pinaka is MK 2 version. 100 kg warhead. India imo needs 300 battery 155mm Howitzers(8 Howitzers in each batter), 1000 Pinaka MLRS.

Guys wake up! The realnthreat is China and this preparations are to counter China-Pak axis.

This is actually Pinaka 2 developed during collaboration with Israelis when Prahaar was being developed,. Taking some of the best features of LORA


Israel Aerospace Industries' involvement the development of India's Prahaar (Hindi for attack) tactical missile was first announced on July 21, 2011 upon the completion of its first test launch. "The missile test was a success," a DRDO spokesperson (India's Defense Research and Development Organization) said, and went on to state that "the missile has a range of 150 kilometers."

The Prahaar is mobile and can be loaded in closed kits on transporters or launch vehicles capable of carrying six missiles ready for action. The missile can be launched in singularly or in salvo at different targets.

The solid-fuel powered Prahaar will fill the gap between the Pinaka tactical missile (40 km range) and Prithvi (350 km range). Prahaar is 7.3 meters long, 42 cm in diameter, and weighs 1,280 kg.

Vijay Saswat, the manager of DRDO, and who witnessed the launch with other senior military officers, stated at Prahaar's debut that the missile will be equipped with various types of explosive warheads for tactical or long-range strategic targets. This indication was clear: Prahaar could be armed with a nuclear warhead.

The Indian army issued a request for proposals (RFP) for the development and production of a short-range, tactical, surface-to-surface missile. The main competitors were Israel, which proposed the LORA (long-range attack) missile developed by Israel Aerospace Industries' Malam plant; and Russia, which proposed the Iskander missile. India delayed its decision for a long time and the new missile only debuted in July. Prahaar is expected to replace other missiles currently in service with the Indian army, including its veteran Prithvi.

Referring to Israel's role in the project, a senior Indian miliary officer said that "Israel is a reliable partner in supplying certain technologies unobtainable from other sources. We prefered to accelerate the program by acquiring certain technologies rather than re-inventing the wheel." According to recent reports, IAI is developing the payload compartment for the new missile while Israel Miliary Industries’ (IMI) Rocket System Division is also involved in the project.

Development of Pinaka may have been the reason the SMERCH deal was cancelled?

LETHALFORCE said:
Development of Pinaka may have been the reason the SMERCH deal was cancelled?
Click to expand...

India is gradually cancelling those deals with Russia in which it is confident that its weapon platform will be better than that of Russia. That is pleasing developement towards self-reliance. Russia proposed earlier to give all the technology of BMP-2 if India would sabotage its FICV plan, lucky for us as India rejected.
P 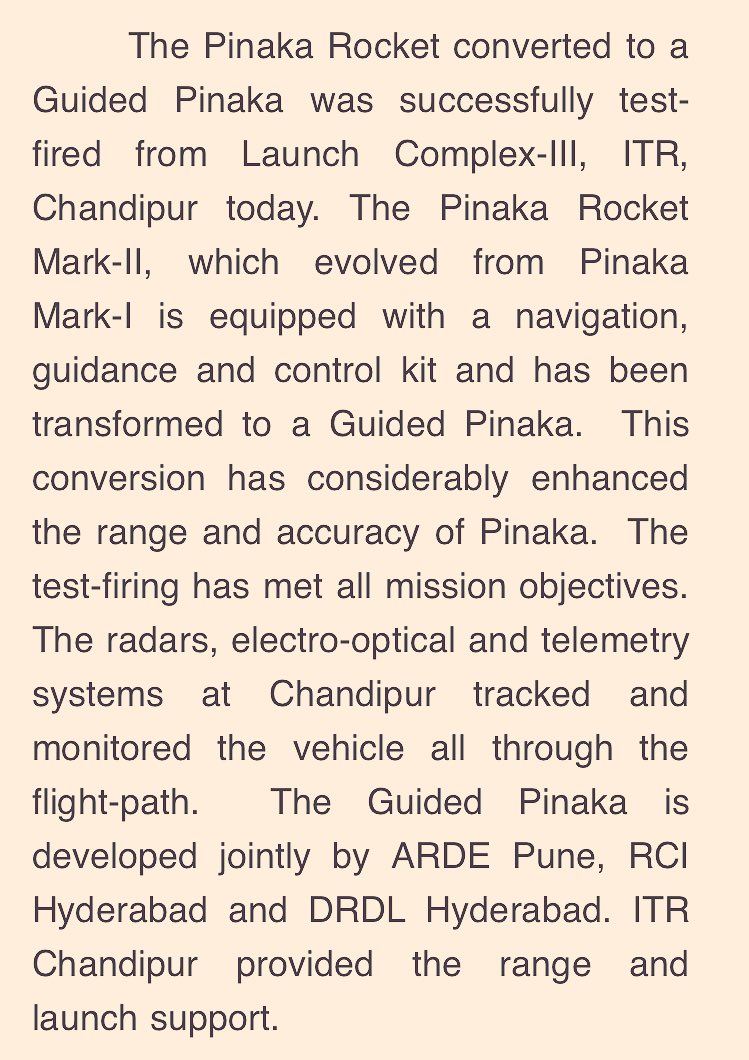 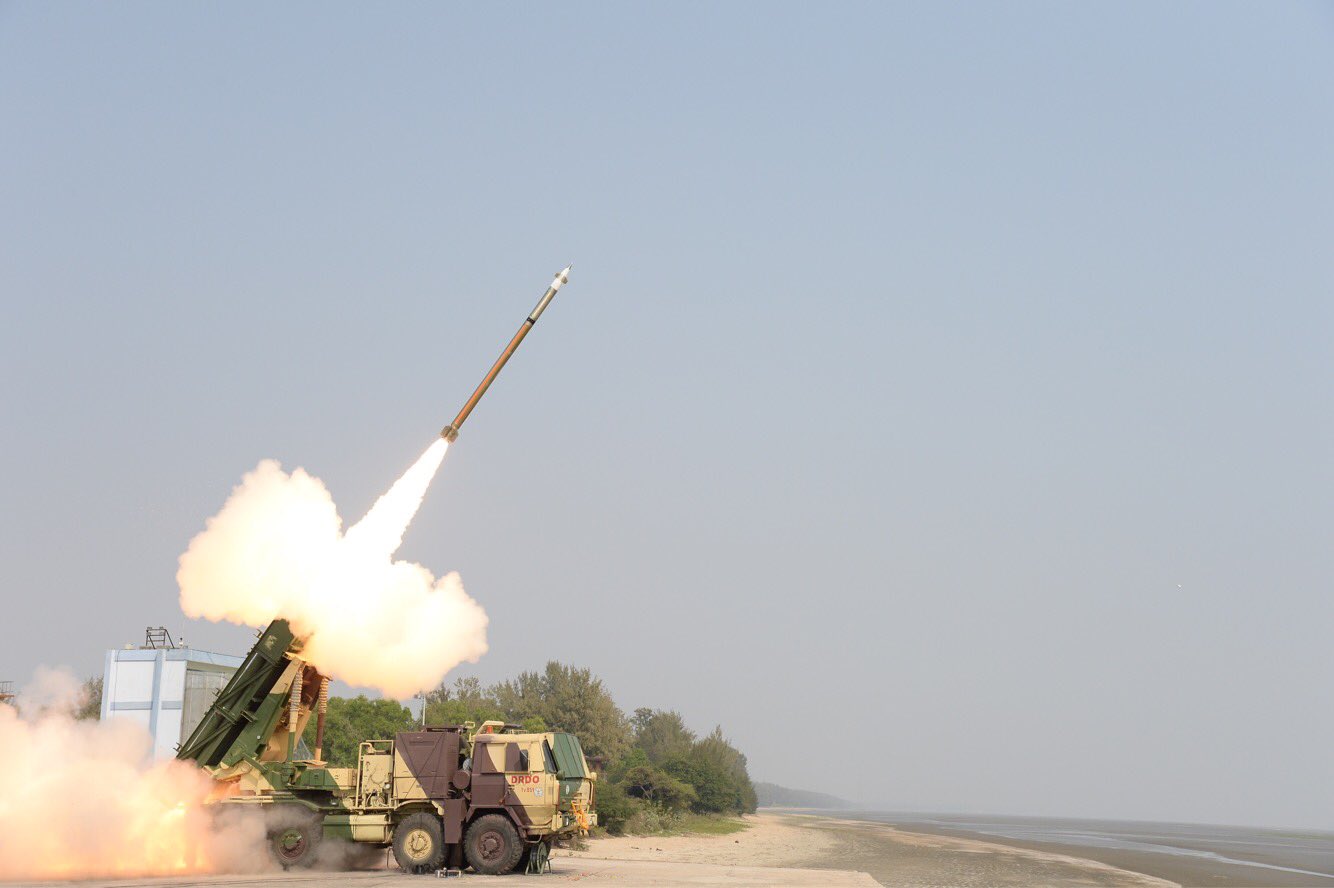 The Pinaka Rocket converted to a Guided Pinaka was successfully test-fired from Launch Complex-III, ITR, Chandipur today. The Pinaka Rocket Mark-II, which evolved from Pinaka Mark-I is equipped with a navigation, guidance and control kit and has been transformed to a Guided Pinaka. This conversion has considerably enhanced the range and accuracy of Pinaka. The test-firing has met all mission objectives. The radars, electro-optical and telemetry systems at Chandipur tracked and monitored the vehicle all through the flight-path. The Guided Pinaka is developed jointly by ARDE Pune, RCI Hyderabad and DRDL Hyderabad. ITR Chandipur provided the range and launch support.

Picture of the guided rocket.

Nope, but will be able to pinpoint bunkers and army installations with in 60 km range.

Pinaka 3 will be even better I guess with 120 km range and guidance.

if pinaka is guided whats the difference between it and ashwin..(i know ashwin is for defence purpose)
does pinaka uses solid fuel entirely..?

Akask kumar said:
if pinaka is guided whats the difference between it and ashwin..(i know ashwin is for defence purpose)
does pinaka uses solid fuel entirely..?
Click to expand...

Never heard of Ashwin. What is that?

Akask kumar said:
if pinaka is guided whats the difference between it and ashwin..(i know ashwin is for defence purpose)
does pinaka uses solid fuel entirely..?
Click to expand...