Pork is as safe/ unsafe as any other type of meat. 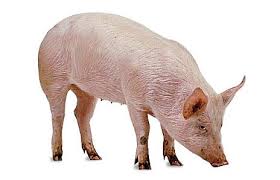 These are what is known as the 'dump' pigs that forage in the muck and are unhygienic.

It has been shown that pigs meat contains parasites that reside in his gastrointestinal tract that will harm the person consuming it for life as when the parasites lay there eggs in your intestines,you will be consuming more energy even when not doing anything,the best alternative is chicken,safe healthy and definetly tasty

All animal flesh are prone to worms.

It would be incorrect a belief that chicken is safe.

Here is why:
Infection by intestinal parasitic worms (geohelminths) is widespread throughout the world, affecting hundreds of millions of people. Children are particularly susceptible and typically have the largest number of worms. Three of the most common kinds of worms are roundworm (Ascaris lumbricoides), whipworm (Trichuris trichiura) and hookworm (Ancylostoma duodenale and Necator americanus). These worms live in the intestines and their numbers build up through repeated infection. It is possible to be infected with more than one kind of worm.

Roundworms exist worldwide, especially in warmer climates. 25% of the world's population may be infected with roundworms (which can reach the size of pencils) and include hookworms, whipworms, pinworms and trichinae. Hookworms migrate down the digestive tract where they attach to intestinal walls and ingest blood. The victim may experience nausea, indigestion, diarrhea, anemia and listlessness. Whipworms are small, about 3 to 5 centimeters long, and infect the large intestine. Pinworms are the most common roundworm in the US and inhabit mostly crowded areas such as schools, day care centers and mental hospitals. They can be as contagious as the flu and usually infect several members of one family. Trichinae are tiny roundworms found in the muscle of infected animals, usually pigs, that cause trichinosis, a disease characterized by intestinal disorders, fever, muscular swelling, pain and insomnia. If you eat pork, be careful since even a small uncooked portion can lead to infection. Always cook pork until it's well done.

Intestinal parasites (worms) are very common in chickens in the backyard type poultry flocks. The presence of a few parasites do not usually cause a problem. However, large numbers can have a devastating effect on growth, egg production, and over-all health. The concentration of parasite eggs in the chickens environment is one factor which plays a major role in determining the severity of the infection. The chickens pick up the parasite eggs directly by ingesting contaminated feed, water, or litter or by eating snails, earthworms, or other insects (intermediate hosts) which can carry the eggs.

Of all the intestinal worms, large roundworms (Ascaridia galli) probably inflict the most damage. Young birds are affected more severely. A mild infection is often not noticed. Large numbers of worms, however, interfere with feed absorption causing poor growth and production. In severe infections there can be actual intestinal blockage by the worms, causing death. Affected birds are unthrifty and more susceptible to other diseases. Roundworms are passed from bird to bird by directly ingesting the parasite egg in fecal contaminated feed, water, or litter, or by eating grasshoppers or earthworms carrying the parasite.

Another worm commonly found in chickens is the cecal worm (Heterakis gallinarum). While it rarely causes problems in chickens, its chief economic importance lies in its role as a carrier of the organism Histomonas melegridis, which causes a deadly disease in turkeys known as blackhead. Earthworms ingest the cecal worm egg containing the histomonad organism from the chicken litter. When the earthworms are ingested by the turkeys, they become infected. The cecal worm egg containing the histomonad organism may also be directly ingested by turkeys. Thus, one should never house chickens and turkeys together or allow turkeys on range which chickens have previously occupied.

Other intestinal parasites that cause problems are the small roundworms (Capillaria sp.) These parasites infect the intestines causing hemorrhage and thickening of the intestinal walls, leading to poor feed absorption and poor growth. Small roundworms are passed directly from bird to bird by ingestion of the parasite eggs or by ingestion of earthworms, insects, and other vectors carrying the parasite. Tapeworms are also very common, but unlike other worms must be passed through an intermediate host, such as a snail, slug, earthworm, beetle or fly.

Prevention and control of worm infestations in backyard poultry flocks involves proper management of diet, sanitation, and treatment. Chickens need a proper diet, especially an adequate supply of vitamins A and the B complex. A deficiency in these has been shown to increase the susceptibility to parasitism.
Last edited: Sep 10, 2013

Avian flu in birds, Mad cow disease in beef, ring worms in pork etc. all can be controlled with proper rearing of the animals.
B

this is how i feel,maybe someone else has other opinions but meat is tastiest when barbe qued with its fat,so basically you have to let the fat do the work of the oil.

Deer, where did u have that?

this is how i feel,maybe someone else has other opinions but meat is tastiest when barbe qued with its fat,so basically you have to let the fat do the work of the oil.
Click to expand...

Deer,its an interesting story a friend of mine invited me for dinner,there was i guess this buttery tasting veal i thought which on further questioning turned out to be a deer he had hunted,he was an avid hunter,its more like saltish buttery chicken.but its good.I feel octopus is good too i had it in sydney.
B

Youll be laughing and i dont know how to say this once thise chinese friend of mine cooked a dog,i have to confess i tasted.it was good

Good to see you relocate from Chennai to Islamabad!

Interesting to know you have tasted ham!

Jinnah is said to have loved it since he was a Westernised Oriental Gentleman!

Deer has a rather odd smell of grass and plants. There is a culinary name for such a smell that I seem to have forgotten.

Haven't tasted dogs and not keen to do so either.

I found oyster rather slimy and have not been able to relish frog legs either. Both I tried when I was in Malaysia.

In the subcontinent, we eat goat,though the restaurants like to sound westernisedly fancy calling it 'lamb'. I tried lamb in Malaysia, where one gets these Australian lamb. Did not like it. The gram fed mutton smell and taste did not suit my palate and sense of smell.
Last edited by a moderator: May 10, 2015
B

yeah i had to move,but ill love to be in chennai any day and for that sake any indian city.
B

if they had an option of a baluch flag i would put it up no hard feelings.
B

so RAY..nice to meet you and any suggestions of any good tasty dish u tried?

Taste is an acquired phenomenon.

I love caviare, but the whole family hates it!

As the nursery rhyme goes:

Taste is an acquired phenomena,i have a taste for glue,meth and at times a shot of herion or two...

Ray said:
That is just starters.

And not in such fancy plates.

Each jawan has his own and he tucks in. as if there is no tomorrow!
Click to expand...

Kunal Biswas said:
Depends person to person, there is availability ..

The Photos taken are mainly for Photo
Click to expand...

Quantity does not matters.

Bilal said:
It has been shown that pigs meat contains parasites that reside in his gastrointestinal tract that will harm the person consuming it for life as when the parasites lay there eggs in your intestines,you will be consuming more energy even when not doing anything,the best alternative is chicken,safe healthy and definetly tasty
Click to expand...

Not if it is cooked properly. Cooking will kill all parasites. The prevalance of worms and parasites in pork eating China is no higher than that in non pork eating Pakistan. Beef too has a terrible parasite called the beef tapeworm. Cook it well and the tapeworm eggs die.

In fact nutrition (and weight) are monitored. Those photos simply show what fits in one plate. The soldier can go for a refill.

That photo appears to be of a 'tasting plate', wherein some portions of what has been cooked is laid out in that plate and the Duty Officer/ Duty JCO/ Company Commander tastes the food to check the taste and if there is adequate condiments used and so on.

I was thinking what type of food do soldiers have in other foreign armies (along with photos )?