How Many Officials Can You Fit In a Single Summit?

It's that time of the year again for the U.S.-China Strategic and Economic Dialogue. It is astonishing that "Washington's planned delegation as of Wednesday numbered about 200 people (and it could end up being more), including at least 15 Cabinet secretaries and agency chiefs."

How Many Officials Can You Fit In a Single Summit? - China Real Time Report - WSJ

How Many Officials Can You Fit In a Single Summit? 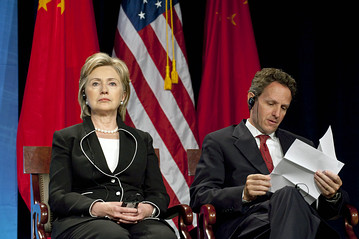 Most people would agree that it's desirable for the world's two most powerful countries to talk. But can you have too much of a good thing?

Reading the list of U.S. participants in the annual U.S.-China Strategic and Economic Dialogue that starts Monday, one could be forgiven for thinking that most of the executive branch of the U.S. government is temporarily relocating to Beijing. Washington's planned delegation as of Wednesday numbered about 200 people (and it could end up being more), including at least 15 Cabinet secretaries and agency chiefs.

And then of course there is Ambassador Jon Huntsman and his staff of more than 1,100 at the giant U.S. Embassy in Beijing, many of whom will be assigned to help work on the megasummit.

The U.S.-China talks were already a rather unwieldy affair in the pre-ampersand era. Former Treasury Secretary Henry Paulson, who dominated the U.S. relationship with China and spearheaded the semi-annual "Strategic Economic Dialogue" from its start in 2006, included other agencies like the Energy Department and the EPA, but the focus of the talks was explicitly economic.

With the Obama administration, and its much more powerful secretary of state, the "and" was added, turning it into the S&ED (or, our preferred shorthand, the SnED) and, in a stroke, making its purview encompass almost the totality of bilateral relations—which, given the size and importance of the U.S. and China, includes most of what's important to talk about in the world. And while more than doubling the range of content, the Obama administration—in conjunction with Beijing—halved the number of sessions per year, to one.

So the question is whether hundreds upon hundreds of officials in a handful of meetings scattered between photo ops and banquets spread over roughly two days a year can actually get anything substantive accomplished. Measured in terms of "deliverables" (diplo-speak for actual announcements or agreements to do things), probably not.

"Our expectations for significant deliverables at this year's S&ED are low," Damien Ma, analyst at New York-based consulting firm Eurasia Group, wrote in a note Wednesday. He said "headline issues like currency" will reside "in the rhetorical realm. Concrete steps are unlikely to be reached in the two-day session." Ma says the only deliverables may be on green energy, and argues that some of the discussion on Monday and Tuesday is merely aimed at signaling agendas for other bilateral meetings, like the Joint Commission on Commerce and Trade, or JCCT, slated for July. (Don't ask.)

But even without deliverables, there may be value to having American and Chinese officials get together for an annual chat. As Ma says, the event can "showcase both sides' comfort in raising thorny issues without outright conflict." The importance of the relationship being what it is, that's certainly worth something—although perhaps it could be accomplished without all 200-plus of those officials, just in case somebody needs to make a decision in Washington when the SnED's in session.

From Voice of America: 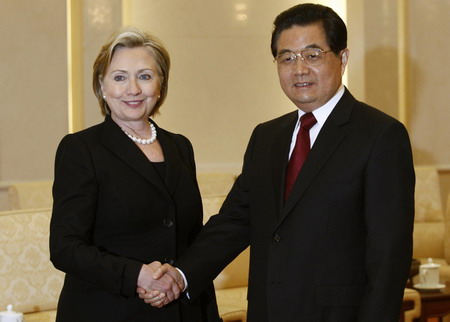 Secretary Clinton speaks during the opening session of the second round of the China-U.S. Strategic and Economic Dialogue at the Great Hall of the People in Beijing on Monday, May 24, 2010.

Secretary Clinton said that progress has been made in some areas of common concern, but there is much more to be done. With regard to international security challenges, the U.S. and China continue to consult closely on the danger posed by Iran's nuclear program.

North Korea also remains a matter of urgent concern. Last year, the U-N Security Council passed a strong resolution in the wake of North Korea's nuclear test. "And today," said Secretary Clinton, "we face another serious challenge, provoked by the sinking of the South Korean ship. So, we must work together again to address this challenge and advance our shared objectives for peace and stability on the Korean peninsula."

On the issues of climate and energy, the U.S. and China have built on the memorandum of understanding signed at the last round of the dialogue, collaborating on new, clean energy research, including the U.S.-China Clean Energy Research Center. The Center will facilitate collaboration between American and Chinese scientists in the areas of energy efficiency and clean coal, including carbon capture and storage, and low-emission vehicles.

The United States has started a new dialogue aimed at expanding educational and cultural engagement in order to deepen understanding and cooperation between the American and Chinese people. This includes a bold initiative to increase over the next four years the number of American students studying in China to 100,000.

The United States and China have very unique cultures and histories. "But we know," said Secretary Clinton, "that our future, both our challenges and our opportunities, will be shared. We have traveled different paths, but that shared future is our common destination and responsibility.""

[Note: U.S. Department of State does not permit image linkage. A substitute photo was used.]

By EDUARDO KAPLAN and ROBERT FLINT

NEW YORK—China gave a fresh display this week not only of its economic and political muscle, but the skill and sophistication with which it now wields its new-found clout.

The carefully watched summit between the U.S. and China that ended Tuesday may have disappointed expectations for a revaluation of the yuan, but it gave clear evidence of China's confidence and ability to assume a leading role in sorting out more pressing issues.

The currency-related discussions at the Strategic and Economic Dialogue in Beijing publicly focused on the party's absent guest--the euro zone and its sovereign debt crisis. This time around, financial markets weren't obsessed with the yuan's exchange rate--investors were too busy trying to understand if China would turn its back on the euro.

First came comments Monday from Zhang Xiaoqiang, vice chairman of the National Development and Reform Commission, who told reporters that neither side raised the yuan issue, but they discussed the euro's exchange rate in connection with Europe's debt crisis.

And when the common currency on Wednesday dropped within a few pips of a fresh four-year low against the greenback on unconfirmed reports that China may review its euro-denominated holdings in light of the euro's 15% decline this year, China came to the rescue. The euro recovered, along with the rest of the markets, as soon as China's foreign-exchange regulator denied the report.

In an unusual move, China's State Administration of Foreign Exchange clarified Thursday that Europe will remain one of the key investment markets for China's foreign-exchange reserves of nearly $2.5 trillion, the world's biggest, despite the euro-zone debt crisis.

Perhaps most important, the statement from SAFE expressed confidence "the euro zone will be able to overcome its difficulties."

The relief was as evident as the realization that China may be opting for a new method of communication, one that relies on a trickle of subtle gestures instead of blunt pronouncements. Having the largest pile of reserves in its coffers while most of the industrialized nations struggle with mounting debt burdens gives China an advantage as well as a captive audience. The intimation, however remote, that it may dump a currency can immediately weigh on investors' sentiment around the globe.

This isn't the first time that talk of China's intentions moved markets, but with investors already on edge trying to work out if the problems in Europe will spoil an incipient economic recovery, a seemingly minor gesture can be easily magnified into a selling rout.

But the performance of Chinese officials this week indicates such clumsiness could be a thing of the past.

China's handling of the bilateral summit--especially its position on the euro-zone crisis--indicates it's advanced far beyond the apprentice stage to take its place at the loftiest levels of world politics. In style and substance, China is demonstrating an increasingly refined approach that reassures, rather than roils, markets. No longer shy students content to watch from the sidelines, China's have become full-fledged masters in the global arena.

However, "China can automatically acquire the [MES] status by 2016." "According to WTO rules, China will acquire MES 15 years after entering the organization. China joined the WTO in 2001, which means it would get that status by 2016 at the latest."

BEIJING, May 27 -- The United States has agreed to recognize China's market economy status (MES) as soon as possible, according to a statement from the Chinese side on Tuesday upon the conclusion of the second round of the China-US Strategic and Economic Dialogue (S&ED).

According to the statement, "the US will recognize China's MES promptly via the cooperative forum of the Sino-US Joint Commission on Commerce and Trade".

"The wording means there has been no breakthrough at all regarding the recognition of China's MES," said He Weiwen, an executive council member of the China Society for WTO Studies.

The US just repeated the wording it used in the first round of the S&ED in Washington and at an ensuing meeting last year, he said.

China's Commerce Minister Chen Deming said on Monday that the US is yet to recognize China's MES and the two sides would continue discussions on this issue at upcoming meetings.

"The later the US formally accepts China's MES, the less valuable the 'prompt recognition' commitment will be, as China can automatically acquire the status by 2016," said Song Hong, an economist of international trade department under the Chinese Academy of Social Sciences.

According to WTO rules, China will acquire MES 15 years after entering the organization. China joined the WTO in 2001, which means it would get that status by 2016 at the latest.

"But at least this shows the US is moving in the right direction", Song said, since the US nevertheless said it will, regarding trade remedy investigations, carefully consider and offer fair and reasonable treatment to Chinese companies that apply for market-oriented industry status, according to the statement.

"Fair and reasonable" treatment in trade remedy investigations should improve the situation of domestic companies exporting to the US. They now have to make a great effort to prove that they belong to market-oriented industries, Song said.

Due to China's failure to achieve MES, Chinese products are calculated based on the market prices of a substitute country - often with much higher production costs than China - as the benchmark instead of its real costs, making Chinese companies vulnerable to anti-dumping and anti-subsidy investigations.

"The US won't easily accept China's MES; instead, it will be used as a bargaining chip with China on other matters," said He Weiwen. For example, the US has been consistently calling for the full opening up of China's financial market to facilitate US financial giants' entry to the world's largest market.

And even after the US recognizes China's MES by 2016, trade remedies against Chinese products will not stop, they will continue or emerge in other forms, said Zhang Yansheng, director of the Institute of Foreign Trade of the National Development and Reform Commission.

(Source: China Daily)"
You must log in or register to reply here.
Similar threads
Faced with many difficulties, China's economy may decelerate sharply
Many retired Gorkha soldiers in 6.6k to get J&K domicile
Here’s how many foreign military sales the US State Department OK’d in FY19
How come so many fires are occurring in India all of a sudden?
Share:
Facebook Twitter Reddit WhatsApp Link