Hizb ut-Tahrir spokesman Uthman Badar: All former Muslims should be put to DEATH

EXCLUSIVE: Days after the carnage in London, this is the moment we catch a firebrand Islamist leader on camera saying all former Muslims should be put to DEATH... in Sydney on Saturday night
By Stephen Johnson For Daily Mail Australia

Hizb ut-Tahrir spokesman Uthman Badar was frank when asked about the group's policy at a forum in Bankstown, in Sydney's south-west, on Saturday night.

'The ruling for apostates as such in Islam is clear, that apostates attract capital punishment and we don't shy away from that,' Badar said in the presence of children. An apostate is someone who decides to leave Islam.

His extraordinary admission was exclusively captured on camera by Daily Mail Australia and the matter has now been referred to the Australian Federal Police by Justice Minister Michael Keenan.

Hizb ut-Tahrir Australia removed references to that apostasy policy from its website as Alison Bevege, a freelance journalist, sued the group for making her to sit in a women's-only section at a separate talk in October 2014.

On Saturday night, Ms Bevege held up a printed copy of Hizb ut-Tahrir's draft constitution of the khilafah state published on the UK site, which was on the group's Australian website until 2015.

This outlines their vision for a global Islamic caliphate, which has Muslims and non-Muslims living under sharia law.

She asked about their policy of killing people born as Muslims who leave the faith.


Article 7c of the document said: 'Those who are guilty of apostasy (murtadd) from Islam are to be executed according to the rule of apostasy, provided they have by themselves renounced Islam.'

'Language that incites or advocates violence is not freedom of speech,' the spokeswoman said.

'This matter has been referred to the AFP.'

Badar's remarks came after he delivered the keynote lecture for the forum, which was called 'Sharia and the modern age'.

He said Islam was incompatible with a secular separation of religion and state, democracy, individual rights and even the process of science, which he called 'scientism'.

He compared calls to fit Islam within a secular society to domesticating a wild animal, putting Hizb ut-Tahrir at odds with secular Muslims who reject sharia law.

'The West seeks to domesticate Islam, to control, to bring within, the way you domesticate animals,' he said.

Badar described calls to reform Islam from secular Muslims as 'pernicious', 'insidious' and 'dangerous' and called for radical change.

'Always when you hear these sorts of calls, alarm bells should ring,' he said.

'The Islam people are calling for fits very well within modernity. They’re giving in to the pressure to conform.'

About 100 people were at the publicly-advertised lecture with men making up about two-thirds of the audience.

Women were segregated from the men on the left-hand side of the room, apart from Ms Bevege who stood at the back.

Following the lecture, a group of men followed Daily Mail Australia to a parked car.

One older man bizarrely demanded to know if men and women had equality in Australia. 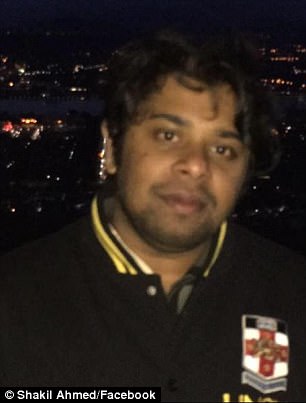 +9
Shakil Ahmed, pictured, attended the talk and said it was depressing to hear Hizb ut-Tahrir voice their support for killing ex-Muslims in Australia

An ex-Muslim from Bangladesh, Shakil Ahmed, attended the talk and later described his disgust with Hizb ut-Tahrir and Islamists, which orchestrated marches in his home country in 2013.

Islamists staged marches in the capital Dhaka after the murder of gay rights activists and atheist bloggers.

'Their primary demand was the death of apostates and blasphemers,' Mr Ahmed, 20, told Daily Mail Australia.

He said it was depressing to hear Hizb ut-Tahrir voice their support for the killing of ex-Muslims in Australia.

'What I felt instinctively is that the reason I left my country was so that I could escape from the exact same people that I found in that room,' he said.

As an ex-Muslim atheist in Bangladesh, he was discreet about his beliefs.

'Apart from a close circle of family and friends, we don't integrate with others as we don't know how they would react to our views,' he said.

The Hindu blogger was on the same death list as atheist blogger Avajit Roy when he got hacked to death in 2015 in Dhaka for promoting secularism.

Farabi Shafiur Rahman, an extremist blogger and member of Hizb ut-Tahrir in Bangladesh was arrested in connection with Roy's murder.

'Once you escape from death, then you will hardly find things that will scare you,' Mr Bhowmik told Daily Mail Australia about seeing Hizb ut-Tahrir Australia leaders in the flesh.

Another Islamist group of religious madrassah teachers, Hefazat e Islam, circulated hit lists of Bangladesh and emerged after Hizb ut-Tahrir was banned in 2009.

Like Hizb ut-Tahrir, they have campaigned in Bangladesh to dismantle parliamentary democracy, scrap aspects of the constitution that contradict sharia law and wind back women's rights.

The latest revelation about Hizb ut-Tahrir in Australia comes as Islamists in Pakistan take to social media to demand the killing of atheist blogger Ayaz Nizami.

He and two others were charged with blasphemy this week by a court in Islamabad and face the death penalty.

Hizb ut-Tahrir operates in 40 nations, including Australia and the United Kingdom, but is banned in Bangladesh along with other Muslim and Muslim-majority nations including Turkey, Egypt, Jordan, Saudi Arabia and Uzbekistan.

Previous
WHO ARE HIZB UT-TAHRIR?
Hizb-ut Tahrir is a hardline Islamist group which seeks the establishment of a global caliphate, or empire.

The extremist group is said to reject democracy, secularism and all Western models of state.

Former prime minister Tony Abbott called for the group to be shut down in 2014, but the ban was never put in place.

A spokeswoman for Justice Michael Keenan told Daily Mail Australia the 'execution' matter had been referred to the Federal Police.

The organisation is banned in a number of Muslim-majority countries.

It is absolutely sick to see US Uk and other so called first world continues to allow this evil cult get away with their violent idealogy in name of liberalism.
Last edited: Mar 29, 2017

TheSeeker said:
It is absolutely sick to see US Uk and other so called first world continues to allow this evil cult get away with their violent idealogy in name of liberalism.
Click to expand...

They aren't letting them get away; they are using them.

HUT is not even saying anything out of context; they mean it because that is what they are taught.
You must log in or register to reply here.
Similar threads
Hizb Al-Tahrir Rally at Al-Aqsa Mosque Calls on Pakistan Army
Hizb poster warns children, their families against joining Indian Army sponsored schemes in Kashmir
Hizb chief Syed Salahuddin warns Pakistan against withdrawing support on Kashmir
J&K government's surrender policy raises Hizb heckles: Daily Mail (UK)
Share:
Facebook Twitter Reddit WhatsApp Link