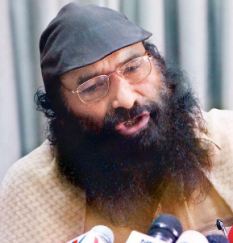 The response to the J&K government's surrender policy for militants who crossed over to Pakistan-occupied Kashmir (PoK) has peeved Hizbul Mujahideen chief Syed Salahuddin.

The rehabilitation policy of giving safe passage to militants who want to return to J&K from training camps across the LoC - though not yet implemented - has received a response encouraging enough to create ripples in the Hizbul camp in PoK.

'The most precious thing for a human being is honour and dignity. I put a curse for one thousand times on those who return to Kashmir in a way they have to surrender before and seek forgiveness from the enemy and go behind bars,' Salahuddin, head of the United Jehad Council, said in Muzaffarabad on Saturday. 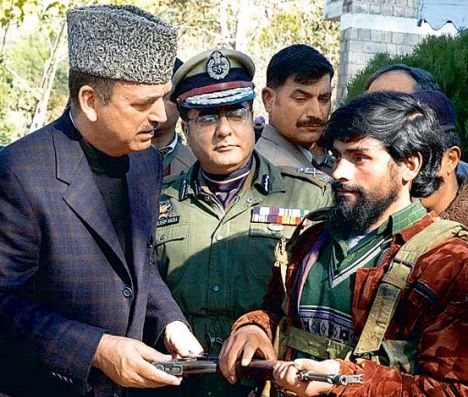 Former J&K CM Ghulam Nabi Azad, left, with a militant during a surrendering ceremony in 2007

In February 2010, chief minister Omar Abdullah had promised amnesty to militants who crossed over to PoK for arms training but wanted to surrender and return.

To seek benefits under the rehabilitation policy, parents of the youths who had crossed over were required to approach the police certifying that their son(s) want to return and live a normal life.

Those who have crossed over are required to write to their families in J&K to get their cases listed.

Their claim of innocence would be verified by security agencies before being cleared by the Union home ministry.

Officials in the home department said it has received 1,034 applications under the policy from the parents of youths who want to return home. 'Out of these applications, 67 cases have been recommended to the Union home ministry for a final decision.

We are still waiting for the home ministry's response,' a senior official said. But Salahuddin was undeterred. 'We will return but with weapons and the flag of freedom in our hands. Let me declare once again that Allah willing the armed struggle of Kashmiri Mujahideen will continue.

The political struggle of Kashmiri people will also continue under the guidance of a sincere and unified political leadership and the diplomatic struggle will be carried forward by the Kashmiri expatriates,' he said.

'But, the deciding front which will compel India's 7.5 lakh army personnel to quit our motherland is the Jihadi front,' he added, ruling out any 'compromise or concession'.

Salahuddin said the militant leadership was not opposed to trans-Kashmir trade but added that there should not be any misconception that the trans-LoC travel or trade was a 'blessing of the sacrifices of Kashmiris'. 'Our basic demand is complete withdrawal of Indian troops,' he added.

'The struggle will continue until the people of J&K will decide their fate through a free plebiscite after withdrawal of Indian troops,' he said.