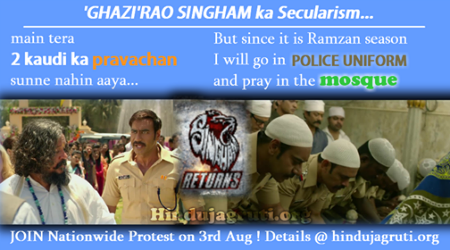 Ahead of its release on Independence Day, Rohit Shetty's 'Singham Returns' has been hit by a controversy after a Hindu organisation has asked the Censor Board of Film Certification (CBFC) to ban the film.

Hindu Janajagruti Samiti (HJS) has written to the CBFC, stating that the film depicts Hindu saints in a bad light, hurting the religious sentiment of the believers of the faith.HJS National Secretary Ramesh Shinde told PTI that the trailer of the film, uploaded online, shows a Hindu saint as a 'villain'

"They have shown that actor Ajay Devgn, who plays the role of a police officer speaks of hitting the saint, while he is seen offering prayer at a mosque in uniform, and saluting a Muslim priest. This is going to create a wrong impression about the Hindu religion," he said.

Shinde said, "If the producer of the film goes ahead with the release without cutting the scenes (defaming a Hindu saint), we will hold demonstrations across the country." 'Singham Returns' has also been shot in Goa, besides Hyderabad and Mumbai.

banning the film altogether is a lil too much.

ban the whole stupid bollywood not because of insulting remarks to hinduism but because they makes bullsh*t,garbage movies.

Ashutosh Lokhande said:
banning the film altogether is a lil too much.
Click to expand...

Better just remove the scene of Police going to the Mosque getting in skull caps and then abusing the "Sadhu".

We all appreciated his Gangajal and the last thing Devgan need is this Muslim appeasement by insulting Hindus.

rock127 said:
Better just remove the scene of Police going to the Mosque getting in skull caps and then abusing the "Sadhu".

We all appreciated his Gangajal and the last thing Devgan need is this Muslim appeasement by insulting Hindus.
Click to expand...

Seriously.....i am fed up with bollywood......Why have the hindus taken the theka of secularism?
Recently there is a KBC ad which also shows secular stupidity....

kisi cheez ko itna bhi naa dikhao logon ka uspe se bharosa uth jaaye..........don't show something so much that people get bored of it. I think one day people will realize that this secularism is bullshit.

If this insult to Hindus didn't stop it would lead to more and this is the reason there SHOULD be limit to tolerance.

Just imagine a Sadhu having a Trident killing a Evil Maulvi in a movie.Easy to imagine what would Muslims do.

rock127 said:
Better just remove the scene of Police going to the Mosque getting in skull caps and then abusing the "Sadhu".

We all appreciated his Gangajal and the last thing Devgan need is this Muslim appeasement by insulting Hindus.
Click to expand...

not devgan but rohit shetty.

In his own words money is what he wants and even if it comes from controversy or insulting Hindus.It's easy since Hindus would not really do something.If done with Muslims riots would be there.

When you make a film, you want your money to be recovered. Unlike earlier times when a film doing well was not counted by how much it earned but on the basis of how many days it ran in theatres - whether a film was a silver jubilee, a golden jubilee or a 100-day running film - that was the main parameter for success. Now we say the film has earned Rs 100 crore or Rs 150 crore or Rs 200 crore. Business is definitely important because otherwise, you won't survive.
Click to expand...

The Original Tamil Version (Singam 2) Does not have such scenes. In the Tamil Version, there are four antagonists are and of which three are Indians and One african. The three Indians are from the three major religions (One Hindu, One Muslim and One Christian). A muslim police officer w ho is also the close aide of the protagonist gets stabbed in his belly by the african while He resists a jail break attempt. But He gets well and joins the Hero for hunting down the criminals.

That said, the Hindi version makers seem have some motive in adding such scenes that are being objected by the Hindu organizations. These are cheap publicity stunts that should not be encouraged.

@Religious nutcases: If you think the movie offends your religious feelings, don't watch it. Simple. Who are you to force other people to stop watching the movie? Vote with your wallet, as civilized people do. Stop acting like animals and stop threatening to kill those who you disagree with, because such behaviour only causes other countries and people to look down upon your kind as barbarians.

Indians have a serious ego problem and it's getting worse every day. :scared:

Making a controversial movie is a fine way to gain cheap publicity, and thereby, decent profits.

It's like celebrity women who purposefully orchestrate nip-slips to gain cheap popularity.
A

Known_Unknown said:
@Religious nutcases: If you think the movie offends your religious feelings, don't watch it. Simple. Who are you to force other people to stop watching the movie? Vote with your wallet, as civilized people do. Stop acting like animals and stop threatening to kill those who you disagree with, because such behaviour only causes other countries and people to look down upon your kind as barbarians.
Click to expand...

@Ideological nutcase: If you think the post is offending your feelings, refrain from commenting.

Forcing people not to watch the movie is when people goes around with danda to pull the shutters of movie theatres. It has not yet gone that way. Hence, your comment is inappropriate. Applying to Censor Board for further review and cutting scenes is totally legal.

BTW, do we care what those snooty countries think about us? It is the same idea by our political class that has brought the present dilemma today - over secularism like the other so called developed nations. They have been seeing us as barbarian since time immemorial, how else the pigshit movie like 'Slumdog Millionaire' could get an Oscar? I would rather we gradually get our economy up to their level when they keep thinking India as the place of Mysticism, Snake Charmers and roaming cows - just like China did.

Now, I personally believe there are multitude of fake Sadhus who are sources of a great deal of corrupt action. BUT - does it mean the other side is pure as snow? How many Maulavis as villain have been depicted in the movies in last 2 decades, even though there have been ample evidence of otherwise. Also, showing a bunch of uniformed police officers who have been depicted as non-Muslims, offering Namaaz can very well be offensive which implies superiority of a religion over others.

And, if you have the least little idea of marketing (I don't know whether you have being a hardcore communist, you probably work better with propaganda) you would know the little incident would simply rack up more revenue for the movie, not less. Curiosity is one of the addiction the marketing people target very well, and this little incident has geared up the curiosity level very high in populace. They would curse the movie may be, but after they come out of the theatre.
A

Devgan was in Gangajal and Not Rohit Shetty.
P

Yeah true we have ego if loving your religion is a sign of ego then true...

But then what will you tell people who are doing doing something even worse than this in the Name of Islam....

That make me Scared.. Here they have said either remove those scenes of dont play it on screens...

Neo said:
Indians have a serious ego problem and it's getting worse every day. :scared:
Click to expand...

Had it been three years back, I would have been against this move by Hindu orgs as I was an idealist back then.

But being a realist now, Hindus cant be meted out this injustice and hence I fully support the move of the Hindu organisations. If the threat of violence can save Islam from being depicted for its actual self, then it means Hindus are not being violent enough when the same does not happen to Hinduism. Enough with the crap called secularism. If Bigotry is the only means of survival, then I say we should be proud bigots as survival trumps every other crap
You must log in or register to reply here.
Similar threads
Hindu DHARMIC Origins of Yezid.
Hindu Origins of zoroastrian
India should stoke Hindu Nationalism in Nepal to counter Chinese influence
First identity of a Hindu?
Share:
Facebook Twitter Reddit WhatsApp Link