It seemed to suddenly loose lift and crashed, though it didn't go up in flames and only the fore part,i.e cockpit seemed damaged.

There are two versions, one that it was pilot error, that an unauthorized aggressive maneuver was performed. The aircraft apparently swung 90 degrees and was unable to regain its position. Another that it could be mechanical error, that smoke was detected before the crash so the incident is still under investigation and no official announcement has been made with regards to the cause of the accident. Junta Investigadora de Accidentes (JIA) which is a special committee will determine the cause of the accident. All Dhruvs in ecuador have been grounded.

What i fail to understand that how come the "Sarang Team" of Indian Air Force can have unbelievable maneuvers & still sustain intact.

Finally one must remember, its the man behind the machine that matters.
N

My heart is calmer now. Thanks to god.

HAL should repair the chopper free of cost(hopping it to be reparable) or we should gift them one. These are must for business prospects.

Embarrassing for both HAL and Ecuador.

I guess it can be rebuild. Most of the parts including engine seems intact. What you think guys?

Quickgun Murugan said:
Embarrassing for both HAL and Ecuador.
Click to expand...

What i think is, we as Indian needs to mature. These things are part of aviation. 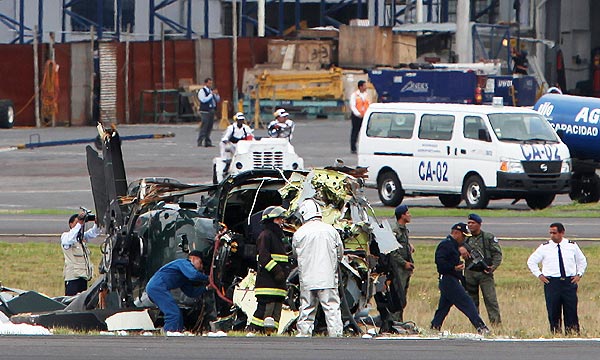 I hope it wasn't a manufacturing or design defect.

any link to Ecuador air chief blaming the pilot?

Good news in this mishap is the pilots are still alive.

Rahul ! flight safety rules may not allow rebuiiding the crashed helo. i saw it in the video, the crashed dhruv being lifted with a crane. except for the cockpit ,most of the craft seems to be intact. what is intriguing is the timing of the crash! The crash took place during an airforce parade, that too before a large crowd! HAL won this order after stiff competetion. Fire can be seen,just before the crash! since lot of eyebrows have been raised ,sabotage angle also should not be ruled out. what is heartening to note is that ,the pilots have managed to escape. DHRUV has an automatic flight control system(AFCS) which is engaged during hover mode in SAR missions.A minor fire in engine will give adequate time for the pilot to land immediately,if its flying at low altitudes. Anyhow, tough time for HAL. They have to do a failure analysis with the cooperation of Ecquador airforce ppl.

As per Shiv Aroor blog, ACM Equadorian Air Force has quoted 'Pilot Error' as a reason for crash.

Venkat. Yes i also feel so. ALH has already blasted in chopper market...... But when builders are close, i think it will be too risky for any one to do alteration. And if anyone is there then it is either BELL(US) or Eurocopter(EU). Question is, will we able to find out if any was there? I think IAF's crash investigation team should also be send there.

maintainence, to my mind, may not be an issue. there was an HAL maintainence team there camping for long now. either it is pilot error or sabotage. if infact it turns out to be a defect then it is a setback for HAL. considering IAF, IN, IA operating it and having given more orders to HAL it seems a little odd.
K

Link? From what I've read, there was smoke spotted coming form the tail rotor prior to the crash.

can some one post pic of the fire on the crash dhruv, i did not see any fire......... i like to say that first the pilot is safe and dhruv is bit damage, still structually it is all right, so that it can be examine in detail by HAL team, there is not much fire at the site

If HAL has to sell its product in world market it has to improve quality and after sale service.

BTW how many Dhruv in service, link would be appriciated. thanks

according to Wiki following accidents have happen with Dhruv:

In November 2004, one of the two HAL Dhruvs sold to the Royal Nepal Army experienced a hard landing, which damaged its undercarriage and landing gear. The damage was subsequently repaired by a team from HAL.[45]
On November 25, 2005, a HAL Dhruv which was being ferried for delivery to the Jharkhand government had a hard landing near Hyderabad the southern Indian state of Andhra Pradesh, though none of the occupants was harmed. The helicopter descended from 5000 feet and suffered almost no damage.[46] Nevertheless, the 65-strong fleet operated by the three armed forces and Coast Guard was grounded briefly, while HAL investigated defects in the composite tail-rotor.[47] which were later fixed.[48]
On February 2, 2007, during rehearsals before Aero India, a HAL Dhruv of the Sarang helicopter display team of the Indian Air Force crashed, killing its co-pilot Sqn Ldr Priye Sharma and wounding the pilot Wg Cdr Vikas Jetley.[49] The accident was later found to have been caused by pilot error.[50] The helicopter team continued to perform in the air show.[51][52]
On October 27, 2009, an Ecuadorian Air Force helicopter crashed during display maneuvers at Mariscal Sucre International Airport, leaving both pilots wounded, with no further casualties. The aircraft was flying in military formation next to two other Dhruv helicopters at the time of the incident.[53]
K

There are reports that any problems with the Dhruv and the Ecuadorians are going to demand to return their purchase.
You must log in or register to reply here.
Similar threads
HAL to sign orders for 73 Advanced Light Helicopters, 106 HTT-40 trainers
AMCA - Advanced Medium Combat Aircraft (HAL)
HAL is welcome to explore tie-up with Embraer
HAL Light Utility Helicopter for Mumbai police.
Share:
Facebook Twitter Reddit WhatsApp Link