End of an era for NASA

End of an era for NASA

In 2010, the space shuttle fleet will fly their last missions into space. (Reuters: NASA TV)

Step aside NASA; it's time to let private enterprise take hold of the wheel. That's the message US President Barack Obama delivered when he handed down NASA's budget.

The US President has put the brakes on the space agency's ambition to return to the Moon - a goal set by his predecessor George W Bush - and set in train the biggest fundamental change in space exploration in half a century.

At the core of the push to the Moon was the Constellation program. Designed by NASA to replace the space shuttle, it has already cost the US taxpayer close to $US7 billion and is several years behind schedule.

In October, the first test flight of the fledging program, the Ares 1-X rocket, successfully launched into the Florida sky.

But that success was overshadowed by the release of the Augustine Human Space Flight Review Committee's report released at the end of 2009. The committee, which included former astronaut Dr Sally Ride, recommended sweeping changes the way NASA managed its human spaceflight program.

"The human spaceflight program that the United States is currently pursuing is on an unsustainable trajectory," they wrote.

They estimated that the Constellation program would cost more than $US100 billion and miss the 2020 Moon deadline by at least 10 years.

In the midst of the greatest economic crisis since the Great Depression, continuing the program was clearly a bad idea.

The cancellation of the Constellation program will certainly mark the end of an era in US space exploration.

In 2010, the space shuttle fleet - of which three remain - will fly their last missions into space. One is already destined for the Smithsonian National Air and Space Museum, while the other two will be put up for sale.

Come 2011, US astronauts will spend the next five to 10 years having to hail a ride on Russia's ageing, albeit still operating, Soyuz spacecraft.


In the meantime, NASA will team up with private enterprise, to support and encourage them to develop the spacecraft of the 21st century.
No longer will NASA dictate what is to be built and how.

For keen observers of space exploration, this approach makes sense.

Why don't NASA astronauts climb on board spacecraft designed and built by private industry?

Virgin Galactic's SpaceShipTwo, built by Scaled Composites, is expected to carry paying passengers on sub-orbital flights - the equivalent of a joyride around the block, sometime this year. But this is several years behind schedule and falls a long way short of getting to low Earth orbit.

Another frontline contender is SpaceX, which last year successfully launched its Falcon 1 rocket into space.

While that is an incredible achievement for a small private company, it's still a long way from achieving the kind muscle needed to carry one, let alone three, astronauts into space at one time.

Even with an injection of extra government funding and support, it is possible that NASA will have to rely on Russia to fly its astronauts into space until the end of the decade.

As a result, the space agency has slimmed down its astronaut corps. It seems growing up to be an astronaut is less of a career option than it was in the 1960s.

Of course the biggest losers are the industries that have relied on NASA and the space shuttle for the past three decades.

US Congresswomen and Senators from Texas, Alabama and Florida - the three states most reliant on NASA's human space flight program - have all voiced their opposition, vowing to block it.

Florida's space coast will also suffer - tourists aren't as likely to want to watch a robot named 'Spirit' or 'Curiosity' risk its life on the top of a rocket.

With only five space shuttle launches left, the local tourism industry is sure to milk as much as they can get.

No one will be following in Buzz Aldrin's footsteps under the new budget, which effectively ends plans for lunar flight by 2020. (Nasa Via Associated Press)

By Joel Achenbach
Washington Post Staff Writer
Monday, February 1, 2010
NASA's grand plan to return to the moon, built on President George W. Bush's vision of an ambitious new chapter in space exploration, is about to vanish with hardly a whimper. With the release Monday of President Obama's budget request, NASA will finally get the new administration's marching orders, and there won't be anything in there about flying to the moon.

The budget numbers will show that the administration effectively plans to kill the Constellation program that called for a return to the moon by 2020. The budget, expected to increase slightly over the current $18.7 billion, is also a death knell for the Ares 1 rocket, NASA's planned successor to the space shuttle. The agency has spent billions developing the rocket, which is still years from its first scheduled crew flight.

It remains to be seen whether Congress will accede to Obama's change in direction. Industry insiders expect a brutal fight in Congress. The early reaction to media reports about the budget request has been filled with howls of protest from lawmakers in districts that would be most affected by a sharp change in strategy.

Obama's budget, according to a background briefing by an administration official on Sunday, will call for spending $6 billion over five years to develop a commercial spacecraft that could taxi astronauts into low Earth orbit. Going commercial with a human crew would represent a dramatic change in the way NASA does business. Instead of NASA owning the spacecraft and overseeing every nut and bolt of its design and construction, a private company would design and build the spacecraft with NASA looking over its shoulder.

"It means that essentially the U.S. has decided that they're not going to be a significant player in human space flight for the foreseeable future. The path that they're on with this budget is a path that can't work," Griffin said, anticipating the Monday announcement.

He said that, although he pushed for seed money for commercial cargo flights to space, he doesn't believe that the commercial firms, such as SpaceX and Dulles-based Orbital Sciences, are ready to take over the risky and difficult job of ferrying human beings to orbit.

"One day it will be like commercial airline travel, just not yet," Griffin said. "It's like 1920. Lindbergh hasn't flown the Atlantic, and they're trying to sell 747s to Pan Am."

John Gedmark, executive director of the Commercial Spaceflight Federation, said the critics underestimate the maturity of the commercial sector.

"The Defense Department began using commercial rockets a long time ago to launch priceless national security satellites, that our troops' lives depend on. If the Pentagon can trust private industry with this responsibility, we think NASA can, too," Gedmark said.

White House spokesman Nick Shapiro said Sunday, "The president is committed to a robust 21st-century space program, and his budget will reflect that dedication to NASA. NASA is vital not only to spaceflight, but also for critical scientific and technological advancements. The expertise at NASA is essential to developing innovative new opportunities, industries and jobs. The president's budget will take steps in that direction."

The administration estimates the new funding for the commercial program would create up to 1,700 jobs, which could help offset the expected loss of 7,000 jobs in Florida when the space shuttle is retired next year.

Although the Obama budget would give NASA a boost of more than $1 billion a year, it's not nearly as much as the $3 billion a year that a president-appointed panel said last year would be necessary for NASA to pursue a worthwhile human space flight program. The panel, headed by retired aerospace executive Norman Augustine, was harshly critical of NASA's strategy, saying that Constellation didn't have nearly the funds to meet its stated goal of a 2020 moon landing, particularly if the space station were to be kept operational.

The panel favored a new strategy for NASA in which returning to the moon would be just one possible element of a broader capacity to launch astronauts beyond low Earth orbit. No human beings have ventured farther than such an orbit since the last Apollo moon landing in 1972.

The public announcement of NASA's new direction will culminate more than a year of closed-door strategizing. That should end Monday with a series of press conferences, interviews and the messages contained in the budget itself.

NASA Details Plan of Putting Base on the Moon by 2024 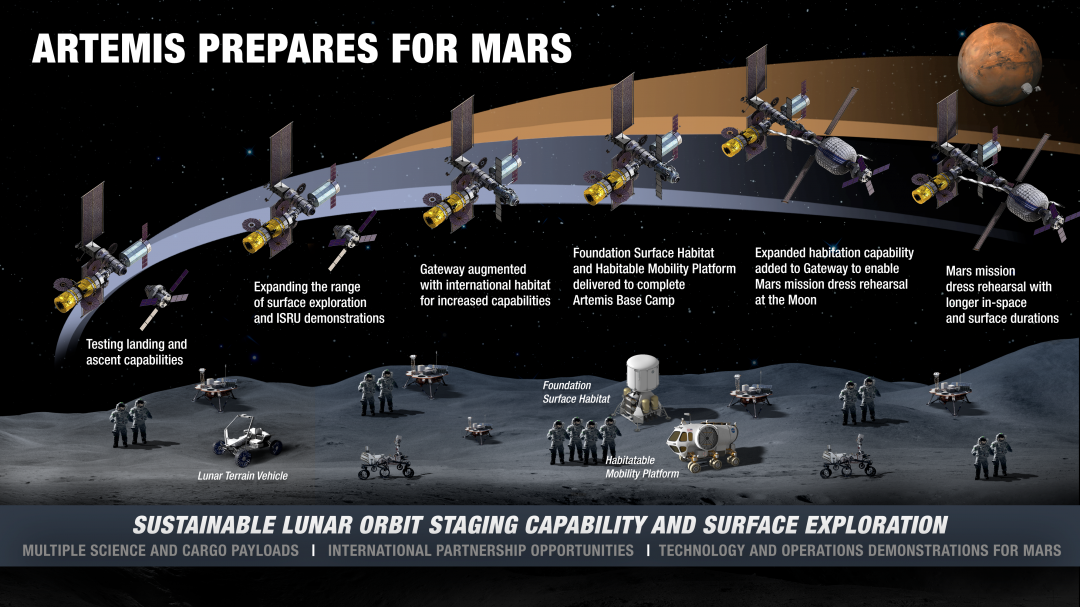 NASA details plans for putting base on moon

NASA's plan to return to the moon in 2024 could be in jeopardy due to the coronavirus pandemic. Nonetheless, the space agency has put forth plans on how it will build a base on the lunar surface. 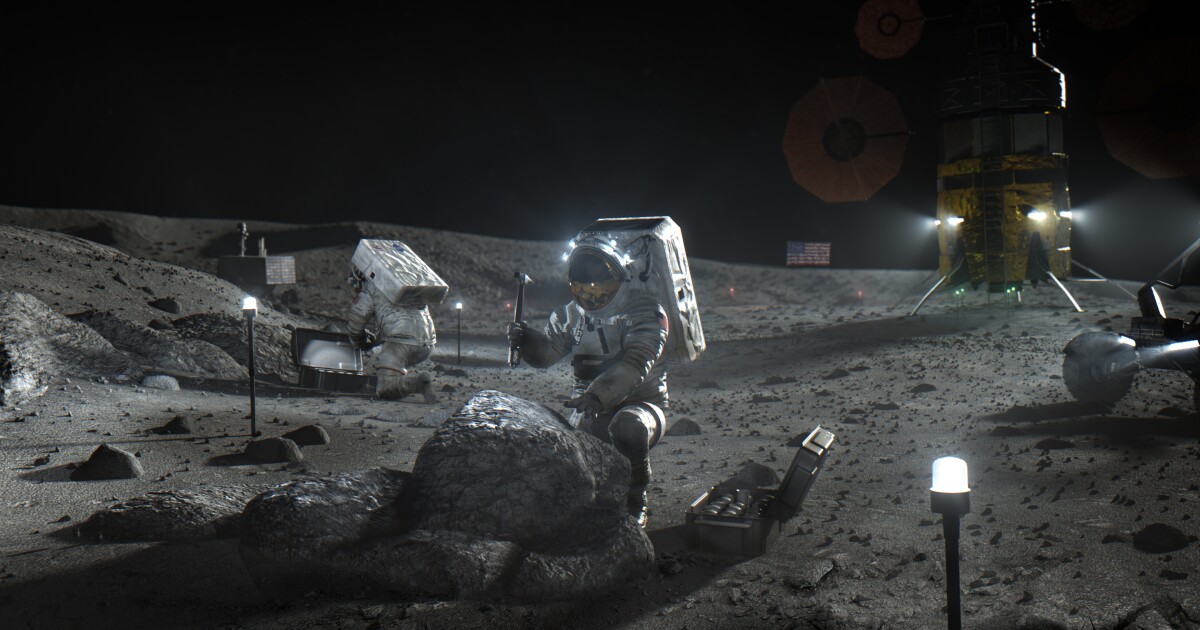 Through its Artemis mission, NASA will endeavor to return humans, including the first woman, to the Moon in the year 2024, and it has just narrowed down the field of firms that will help carry the astronauts safely down to the lunar surface. Blue Origin, Dynetics and SpaceX have been selected to…

NASA will always be on the top and the company proves it with every mission it applied.
You must log in or register to reply here.
Similar threads
Indus era 8,000 years old, not 5,500; ended because of weaker monsoon
Lada Classic ends 40-year era of Russian car-making
With General VK Singh's exit, it'll be end of 71 era
Is this the end of Shah Rukh ; And how long will the Salman era last ?
Share:
Facebook Twitter Reddit WhatsApp Link