Let's form a group and look into what we can get out of this exercise.

Nearly 1500 years without any script.
Although an Oral culture flourished during this period.

We need to first identity if the later scripts derive from Indus script. Kinda looks doubtful.

1500 years is too big a gap for Harappan descendants to carry any memory of Harappan script unless some kind of script did exist between that 1500 year period that links to Later scripts.

Then some words identified in Near East like words for Elephant and trade from Melhua.

Our work would be to find out Harappan specific items traded in Near East and their naming in those cultures. 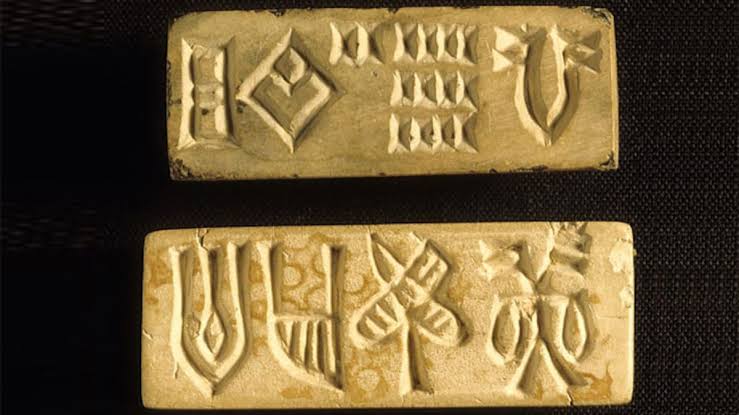 Mesopotamia was trading Lapis Lazuli from Harappans. Any idea what it was called?

It most likely came from Afghanistan and was highly prized in Near East and many myths were associated with it.

Lapis is the Latin word for "stone" and lazulī is the genitive form of the Medieval Latin lazulum, which is taken from the Arabic لازورد lāzaward, itself from the Persian لاجورد lājevard.

Not sure yet sharing
Could be entirely wrong.

For some odd reasons some Near East names do sound Indian like Anu, Manishtushu and Ramses. Manish and Anu are pretty common names in North Indian languages.

Indo-Aryan *marya, which means man or youth, associated to military affairs and chariots.

Mittani were pretty much in the same space but different time.

Etched carnelian beads from the Indus were found in the tombs of the Royal Cemetery of Ur, dating to 2600–2450 BCE. They are an important marker of Indus–Mesopotamia relations in ancient times. The Neo-Sumerian ruler Gudea (circa 2100 BCE), in his Gudea cylinders (cylinder B XIV), mentioned his procurement of "blocks of lapis lazuli and bright carnelian from Meluhha."Meluhha is generally identified with the Indus region, and there are no known mentions of Meluhha after 1760 BCE. It is thought that these carnelian beads were considered as an important status symbol in Sumerian society.

One wonders if Meluhha is a given name or native

Only word that I can think of that comes close to Meluhha is Mlechha.

A Sanskrit term, originally to indicate the8 uncouth and incomprehensible speech of foreigners.

Did Mesopotamians used it in same context?

Did Meluhha meant foreigners from far away place?

The Sanskrit word occurs as a verb mlecchati for the first time in the latic Vedic text Śathapatha‐Brāhmana dated to around 700 BCE. It is taken to mean "to speak indistinctly or barbarously".

The Sanskrit word mleccha does not have a standard Indo-European etymology and has no counterpart in Iranian languages. However, it has cognates in Middle Indo-Aryan languages: Pali milakkha, and Prakrit mliccha, from the latter of which originate Sindhi milis, Punjabi milech, Kashmiri brichun (weep or lament), Western Pahari melech (dirty).


The logic they give for Elephant name in Mesopotamia does not fit with horse. One wonders why?

If I am not wrong name for Horse in modern Indian languages is derived from Ghotika not Ashva. Then one wonders what Ashva was and why such a deviation.

Aratta is described as follows in Sumerian literature:

Enmerkar and the Lord of Aratta - The goddess Inanna resides in Aratta, but Enmerkar of Uruk pleases her more than does the lord of Aratta, who is not named in this epic. Enmerkar wants Aratta to submit to Uruk, bring stones down from the mountain, craft gold, silver and lapis lazuli, and send them, along with "kugmea" ore to Uruk to build a temple. Inana bids him send a messenger to Aratta, who ascends and descends the "Zubi" mountains, and crosses Susa, Anshan, and "five, six, seven" mountains before approaching Aratta. Aratta in turn wants grain in exchange. However Inana transfers her allegiance to Uruk, and the grain gains the favor of Aratta's people for Uruk, so the lord of Aratta challenges Enmerkar to send a champion to fight his champion. Then the god Ishkur makes Aratta's crops grow.

Enmerkar and En-suhgir-ana - The lord of Aratta, who is here named En-suhgir-ana (or Ensuhkeshdanna), challenges Enmerkar of Uruk to submit to him over the affections of Inanna, but he is rebuffed by Enmerkar. A sorcerer from the recently defeated Hamazi then arrives in Aratta, and offers to make Uruk submit. The sorcerer travels to Eresh where he bewitches Enmerkar's livestock, but a wise woman outperforms his magic and casts him into the Euphrates; En-suhgir-ana then admits the loss of Inanna, and submits his kingdom to Uruk.

Lugalbanda in the Mountain Cave - is a tale of Lugalbanda, who will become Enmerkar's successor. Enmerkar's army travels through mountainous territory to wage war against rebellious Aratta. Lugalbanda falls ill and is left in a cave, but he prays to the various gods, recovers, and must find his way out of the mountains.

Lugalbanda and the Anzud Bird - Lugalbanda befriends the Anzud bird, and asks it to help him find his army again. When Enmerkar's army is faced with a setback, Lugalbanda volunteers to return to Uruk to ask the goddess Inana's aid. He crosses through the mountains, into the flat land, from the edge to the top of Anshan and then to Uruk, where Inana helps him. She advises Enmerkar to carry off Aratta's "worked metal and metalsmiths and worked stone and stonemasons" and all the "moulds of Aratta will be his". Then the city is described as having battlements made of green lapis lazuli and bricks made of "tinstone dug out in the mountains where the cypress grows".

Inana bids him send a messenger to Aratta, who ascends and descends the "Zubi" mountains, and crosses Susa, Anshan, and "five, six, seven" mountains before approaching Aratta. 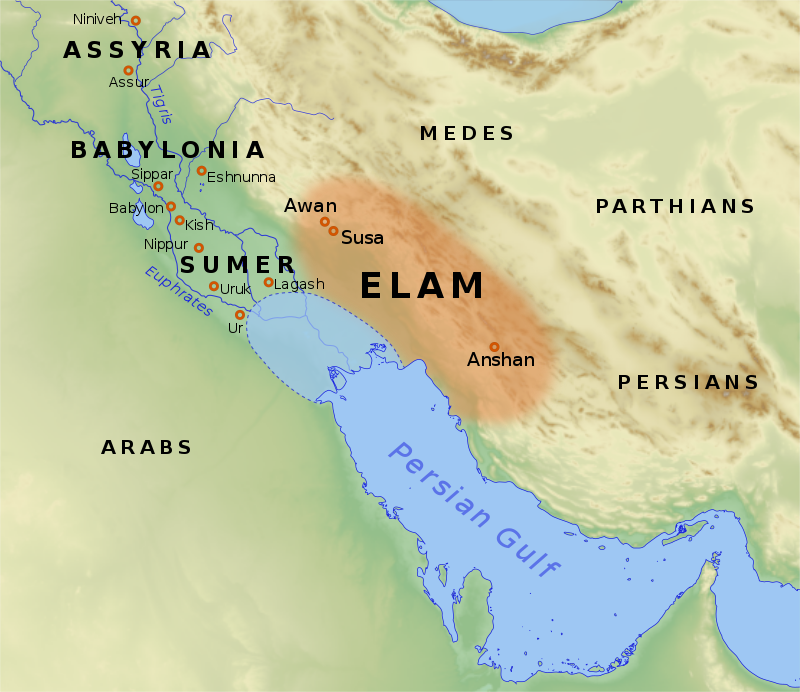 In all Likely hood it's either Jiroft or east of it which is a civilization known for its exports of lapis Lazuli.

Aratta are descendents of Amavasu who migrated West as per our oral traditions.

May be these God's like Ishkur, Innana, Anu were worshiped by these Vedic tribes that ventured outside the Sapta-Sindhu region or could be the progenitors of these tribes.

Look at this from Jiroft 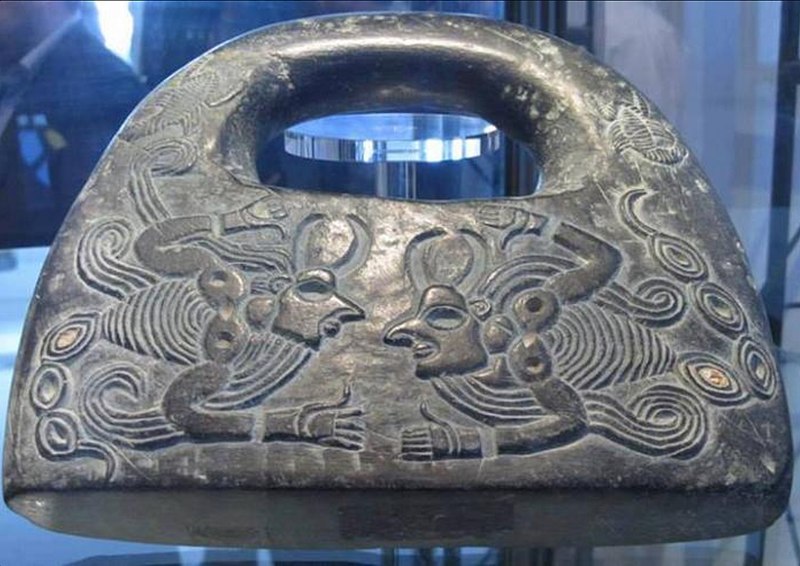 And now at this from ? From time ? 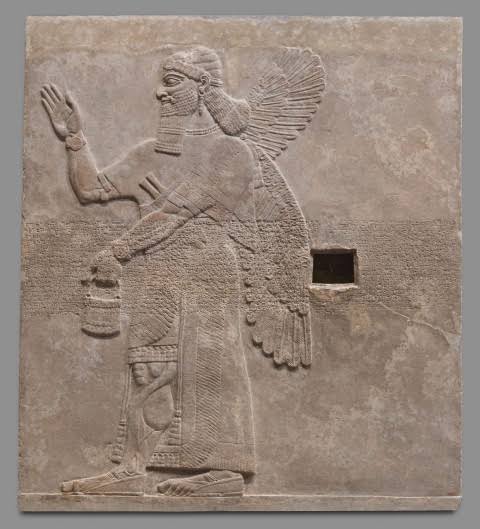 Innana was associated with Lions.
Innana was a Godess from Aratta.
Aratta were from India.

Modern Indians are the only living culture to worship a goddess associated with Lions.

All these date conincide with early and mature Harappa.

Not with the traditional post 1500bce dates of Invasionists.