New Delhi: The Election Commission has staggered voting in Jammu and Kashmir and Uttar Pradesh over five phases while Bihar will have a four-phase election.

The remaining 15 states and seven Union Territories will hold vote on a single day.

All election related procedures are to be completed before May 28.

New Delhi: The Election commission on Monday announced dates for the 15th Lok Sabha elections , which will be held in five phases from April 16 to May 13.

Jammu and Kashmir and Uttar Pradesh will vote in five phases, Bihar will have four-phase elections while Maharashtra and West Bengal will vote in three phases.

All election related procedures will be completed before May 28.

The dates were announced after the three-member Election Commission met under the chairmanship of Gopalaswami in New Delhi on Monday.

The model code of conduct also comes into effect immediately.

The delimitation of parliamentary constituencies is over except for Arunachal Pradesh, Jammu and Kashmir, Jharkhand, Manipur, Assam and Nagaland. Out of the 543 Lok Sabha seats, 499 have been redrawn following the delimitation.

There will be 8,28,804 polling stations for the General Elections and the Election Commission will be using around 11 lakh electronic voting machines.

The dates were finalised taking into account aspects like school board examinations, local holidays, festivals, harvest and after series of meetings with political parties, Chief Secretaries and Director Generals of Police and Railway Board officials starting from February 3, said Gopalaswami, who was flanked by Election Commissioners Navin Chawla and SY Qureshi.

The term of the 14th Lok Sabha ends on June 1, 2009 so the new Lok Sabha will have to be constituted by then.

Gopalaswami's term ends on April 20, 2009, which means a major part of the elections to the 15th Lok Sabha will be held under Chawla's supervision.

Elections to state Assemblies in Andhra Pradesh, Sikkim and Orissa will be held simultaneously with the Lok Sabha polls.


The Importance of India's elections

Hundreds of millions of voters are expected to cast their ballots when India holds general elections over April and May. Ramachandra Guha explains what makes elections in the world's largest democracy special, and what is likely to happen this time.

In the first weeks of 1967, the Times of London dispatched a reporter to cover the Indian elections. Travelling around the country, he saw - or thought he saw - a mood of apathy and helplessness.

Some Indians he talked to had expressed a "readiness for the rejection of parliamentary democracy". The journalist himself was dismayed by the conflict and the corruption. He could spy "the already fraying fabric of the nation itself", with the states "already beginning to act like sub-nations".

He concluded that "the great experiment of developing India within a democratic framework has failed". Indians would thus soon vote in "the fourth - and surely last - general election".

That was not the first such gloomy prediction about India, nor would it be the last.

Through the 1970s and 1980s, as the country lurched from one crisis to another, fears were expressed that it might break up into many parts, or come under military rule.

Only after India celebrated its 50th anniversary in 1997 did these prophecies of doom finally go away.

The country was still marked by extremes of wealth and poverty, and by myriad social conflicts. But no one doubted any more that it would survive as a single entity. And all agreed that it was and must remain an electoral democracy.

In the summer of 2009 Indians will vote in the 15th general elections since independence.

The ruling coalition, known as the United Progressive Alliance (UPA), will have as its main challenger another patchwork of multiple parties, the National Democratic Front (NDA).

Both are "national" parties, with a presence in most parts of India. However, there will be dozens of lesser parties in the fray, each seeking to represent a particular state, region or caste group.

Over 700 million Indians will be eligible to vote. Perhaps 400 million will actually exercise their franchise, making this the greatest exercise of the democratic will anywhere and at any time in human history.

But what will this election be about? Who or what are the voters being asked to choose from?

At one level, the election shall be about individuals. 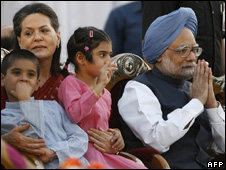 Sonia Gandhi and Manmohan Singh
Manmohan Singh is seen as a politician of integrity​
Both major fronts have announced their candidates for prime minister in advance.

The UPA's man is the incumbent, Dr Manmohan Singh, a politician of exceptional integrity and intelligence, with a reputation however for being soft and indecisive.

The NDA has put forward LK Advani, who is best known for leading the campaign to have a temple dedicated to the Hindu god Ram built on the site of a mosque demolished in 1992, in the northern city of Ayodhya.

Mr Singh is a few years short of 80; Mr Advani is several years older still. So, while announcing their names, the two major parties have also indicated who would be their heirs apparent.

As and when someone has to succeed Mr Singh, the Congress will offer Rahul Gandhi, the son, grandson and great-grandson of prime ministers. A handsome young man with charming manners, he is yet to show that he has the necessary will and drive to succeed in the harsh world of Indian politics.

The BJP's man-in-waiting is the Chief Minister of Gujarat, Narendra Modi. A capable administrator, Mr Modi is nevertheless tainted by the pogrom against Muslims that took place under his watch (and, some would say, with his encouragement) in Gujarat in 2002. 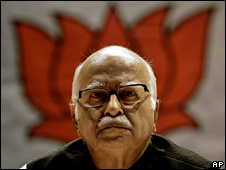 LK Advani
LK Advani is best known for his campaign to build a temple in Ayodhya
At another level, the election shall also be about issues, most notably, the economy.​

The NDA fought and lost the 2004 elections on the slogan of "India Shining". It gloried in the high rates of economic growth then prevalent, to be shot down by the opposition's claim that this growth had not percolated down to the aam admi, or common man (and woman).

The UPA, wiser by the experience, will seek to showcase its waivers of crop loans and its programmes of rural employment.

The NDA will answer that, far from helping the poor, these schemes have merely promoted cronyism and corruption.

Thirdly, this election shall also be about identities.

The BJP will subtly - and sometimes not so subtly - hint that the Congress favours the Muslim minority, and that they will instead consolidate the claims and the pride of the majority Hindus.

Other parties will break down these religious monoliths in terms of caste, class and region.

There are several powerful regional parties in the south, representing one or other linguistic group, each more powerful in their state than either the BJP or the Congress. In northern India caste-based parties are strong. And the Communists have a major influence in the states of Kerala and West Bengal.

With reference to the Times correspondent in 1967, one can confidently state that these elections will not be the last to be held in India. Predicting their outcome is another matter altogether.

In the last eventuality, the prime minister is likely to be Mayawati, the present chief minister of India's largest state, Uttar Pradesh. A woman from the Dalit or formerly Untouchable castes, she is admired for her courage and persistence but also feared for her vengefulness.

What we do know in advance is that the government that comes to power in the summer of 2009 will be a coalition, a weak coalition. This is not a happy augury for the interval between these elections and the next.

It is to the credit of democracy that millions of often poor and sometimes illiterate Indians vote freely and fairly. That said, the conduct of governments in India has tended to be capricious and arbitrary.

Having many parties in power at the centre is in one respect a reflection of democracy's deepening, a product of the representation of groups and regions previously excluded from government.

At the same time, the satisfaction of so many different interests leads to short-term rent-seeking rather than to rational policy. Smaller parties covet the most lucrative ministries, and the larger parties, simply to stay in power, are obliged to concede these to them.

Like the 14 others that preceded them, the Indian elections of 2009 will be marked by colour, intensity and a mass involvement of individuals in democracy unmatched elsewhere in the world.

But unless governance itself becomes more transparent and accountable, India will continue to be plagued by corruption and inefficiency of a scale unacceptable in a modern state presuming to speak for and serve the people.

Ramachandra Guha is the author of India after Gandhi: The History of the World's Largest Democracy. He lives in Bangalore.