BEIJING—Colombian and Chinese officials struck agreements that may help direct much of the Latin American nation's future oil and coal exports to Asia and away from U.S. and European markets. 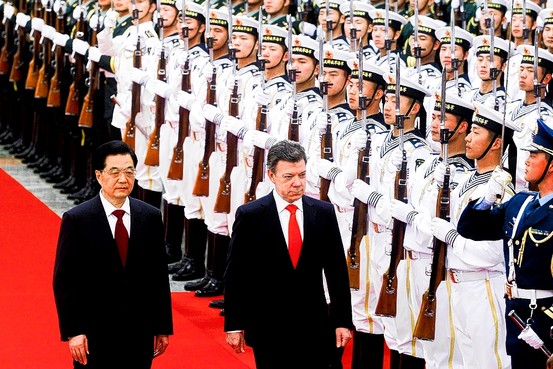 
The agreements, signed Wednesday during a trade and investment promotion trip to China in which Colombian President Juan Manuel Santos met with Chinese President Hu Jintao, come as the U.S. ally rethinks its traditional reliance on markets in the north and west, said Colombian Mines and Energy Minister Mauricio CÃ¡rdenas in an interview.

With demand growing in China and elsewhere and the evolving energy market in the U.S., "we have to start shifting our markets to Asia," he said.

On Wednesday, state-controlled China Development Bank signed a preliminary agreement to provide financing for an ambitious project to pipe 600,000 barrels a day of Venezuelan and Colombian oil through the jungles of both countries and across the Andes to southern Colombia's Pacific coast, from where it would be exported to China and other Asian markets. Details have yet to be completed.

Chinese and Colombian officials also agreed to start talks on bringing in state-controlled Sinochem International Corp. as a possible equity partner in the pipeline project. Mr. Santos said Mr. Hu and Chinese companies had shown a strong interest in joining the pipeline project.

The ministerial team accompanying Mr. Santos held talks on developing central Colombia coking-coal reserves, building a railway to the Pacific coast to cut shipping costs to Asia, developing mineral deposits in the Amazon basin, and on supplying solar panels to up to 2,000 schools not connected to power grids. Coking coal is used to make steel.

Colombia exported just 56,000 barrels a day of crude to China in the first three months of 2012, compared with China's overall crude imports of 5.69 million barrels a day in the period. About half of Colombia's oil normally goes to the U.S.

Colombian oil output will hit the one-million-barrels-a-day milestone in a few weeks, and could rise to 1.5 million barrels daily by the end of the decade. 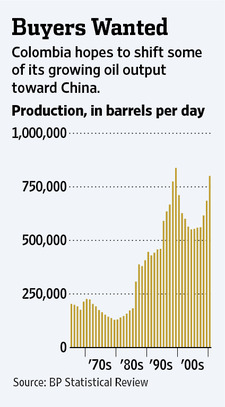 The country's relationship with China is very different from that of leftist neighbors Venezuela and Ecuador, both of which have huge debts with Beijing.

Colombia has market-friendly investment policies and warm political ties with Washington. Still, U.S. demand has slowed as the economy matures, trimming demand for sources such as coal, and as it shifts its energy mix toward natural gas, a result of a boom in production from new sources such as shale gas.

"It is absolutely true, and not just with coking coal," Mr. CÃ¡rdenas said. "It is also with thermal coal, as with the development of shale gas in the U.S. We know that there will be less demand there."

The pipeline project comes as China has increased its investment in oil exploration and production in the region.

Mr. Cardenas said results of bidding by domestic and foreign companies for 109 oil and gas concessions, in which "four or five" Chinese groups are interested, will be out in November. He also said Chinese officials told him China wanted to be a strategic partner for energy with Colombia, and that oil produced by Chinese companies in Venezuela could be sent through the pipeline.

The final route of the pipeline hasn't been decided. It will carry 300,000 barrels a day of Colombian and Venezuelan crude each when completed in 2018.

Mr. Cardenas said talks also have been held with state-run China Railways Materials Co. on building a railroad from the center of the country to the Pacific coast to permit the exploitation of large coking-coal reserves there and the cheaper export of the steelmaking fuel to China and Asian markets than through the Panama Canal. For now, all of Colombia's coal exports go through its Caribbean ports.

He said talks also are under way with Chinese companies about joint ventures to tap reserves of the mineral coltan, which is used as a conductor in a number of consumer-electronic products. Given the ecological importance of the area where the reserves are located and the presence of indigenous peoples, any project decisions would be made with sensitivity, Mr. Cardenas said.

Santos in China: no time wasted

Plan to build railway alternative to the Panama Canal? Check.

Juan Manuel Santos, Colombia's president, didn't waste any time shaking off jetlag after landing in Beijing on a mission to strengthen diplomatic and trade ties.

The president and his team of ministers, including mining minister Mauricio Cardenas, signed nine pacts with China on Wednesday, including a preliminary deal with China Development Bank to finance a 600,000 barrel a day pipeline through Venezuela and Colombia to the Pacific Coast, and the first step in building a free trade agreement.

Colombian officials also held talks with China Railways Materials Company on building a rail linking the country's Atlantic and Pacific coasts – an idea first floated by Santos in an interview with the FT last year; and on developing mining of coal and coltan, which is used for mobile phones and electronics.

HydroChina Corp also signed a deal to develop a project on Colombia's Magdalena River, once a major trade route in a country that still lacks a strong road infrastructure network.

It will be fascinating to see how quickly a Colombia-China free trade deal develops. Colombians could be forgiven for being skeptical after having been forced to wait so long for a US free trade deal, which is only coming into force now after it became bogged down in domestic US politics and rising protectionist sentiment.

But China is certainly not dragging its feet when it comes to Latin America. Whether in the form of loans-for-oil, as in Ecuador and Venezuela, or direct investments in mining, as in Peru and Brazil, it has spent billions securing resources to fuel its own growth and extending its influence across the Pacific.