Central Design Bureau named Alekseev, known as the developer of "Caspian Monster", intends to resume the design and development work to create a WIG, which subsequently will be used for law enforcement agencies in Russia. This, as reported by Interfax, said the head of department of quality CDB Evgeny Alekseev Meleshko. According to him, CCB received a request the government to resume work.
During 2010-2011, will be carried out design work. From 2012 to start the second, more prolonged, phase, during which will be conducted development work, and will create a "sufficiently large winged. "For our company it is quite a large amount of work, most professional companies will work on this topic," - said Meleshko.

In the USSR the production of WIG started in 1957 and ended in the early 1990's. During this time it was built about 30 such devices, which in the international classification defined as naval vessels. " Uses a winged effect of aerodynamic screen when moving over water or land surfaces. On other ships, such as boats hovercraft or hydrofoils, hovercraft have a higher speed - up to 250 knots.

In 1960 CDB Alekseev created and tested on the Caspian Sea pilot winged, christened by western intelligence agencies "Caspian Monster" - that intelligence deciphered the abbreviation "CM" (ship-model) on board the vessel. Ekranoplan had a wing span of 37.6 meters and a length of about one hundred meters, and maximum takeoff weight of 544 tons. In 1980, a prototype of the ship crashed and sank after which it was decided to discontinue the project.

The most famous Soviet ekranoplan were troop-"Eaglet" (built five units) and stroke-winged rocket "Lun" (built by one unit, separated from the Black Sea Fleet in 1990). The armed forces of the USSR WIG planned to use in landing operations for the delivery of goods, as well as anti-and anti-order. There is also the project of Robert Bartini to create a strategic winged bomber A-57. 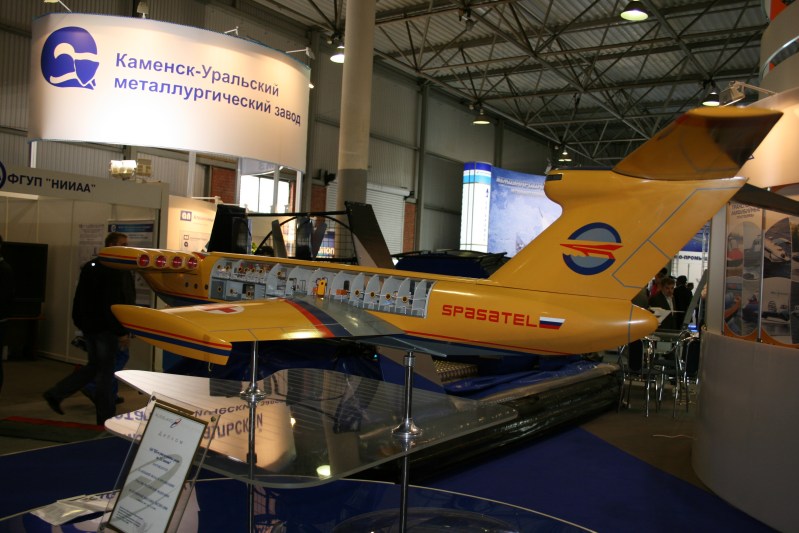 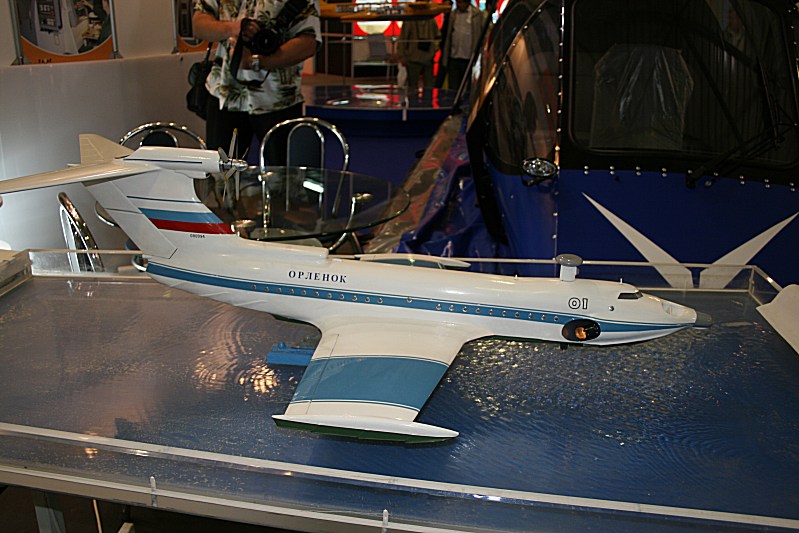 The Soviets Had Big Plans For This Enormous Nuclear Equipped Ekranoplane

In the thick of the Cold War, the Soviet Union built an immense vessel to carry their troops across the seas and into Western Europe.

Equipped with nuclear warheads and able to blast across the sea at 340 mph, the Lun-class Ekranoplane; part plane, part boat, and part hovercraft — is a Ground Effect Vehicle (GEV).

A GEV takes advantage of an aeronautical effect that allows it to lift off with an immense amount of weight, but limits its flight to 16 feet above the waves. Its altitude can never be greater than the length of the wings.

Think of a large seabird, like a pelican, cruising inches from the water and not needing to flap its wings.

The only complete Ekranoplane now sits on the shores of the Caspian Sea.

While there is talk of refitting the Lun-class and getting the GEV back in the fleet, it's now rusting away, and was spotted by aviation blogger Igor113 who posted these pictures to his blog.


[Source: ]The Ekanoplane Is The Biggest Ground Effect Vehicle Ever 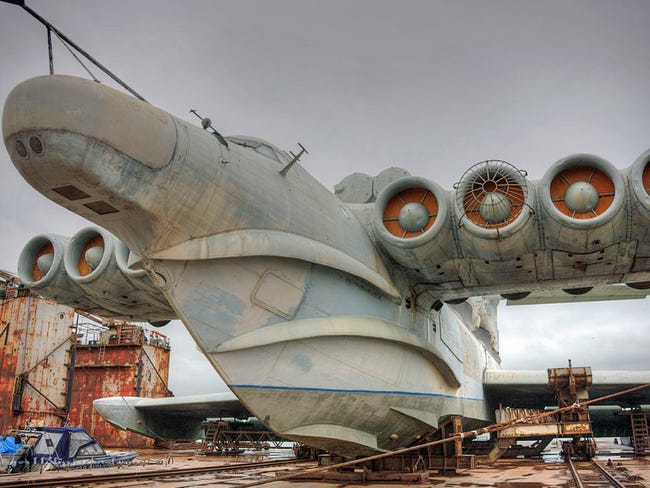 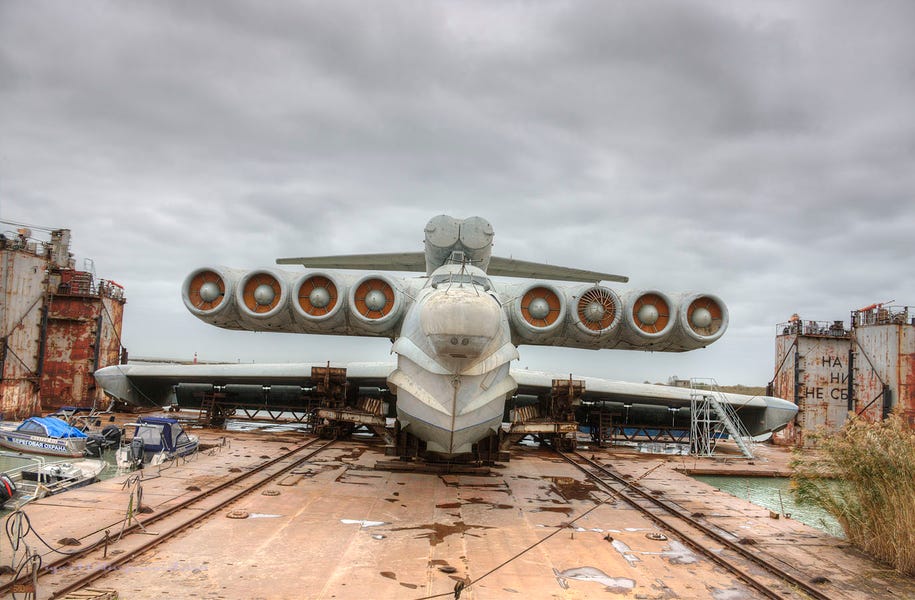 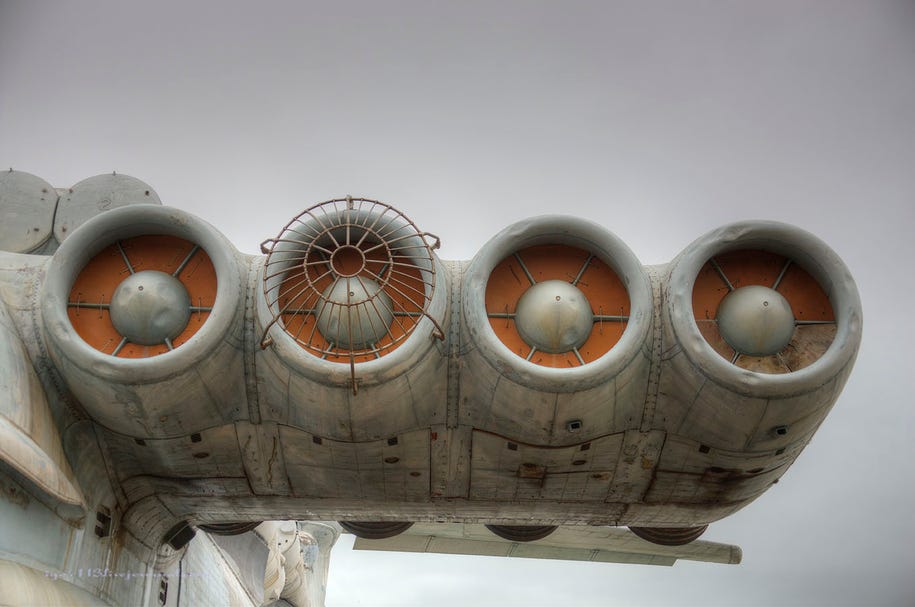 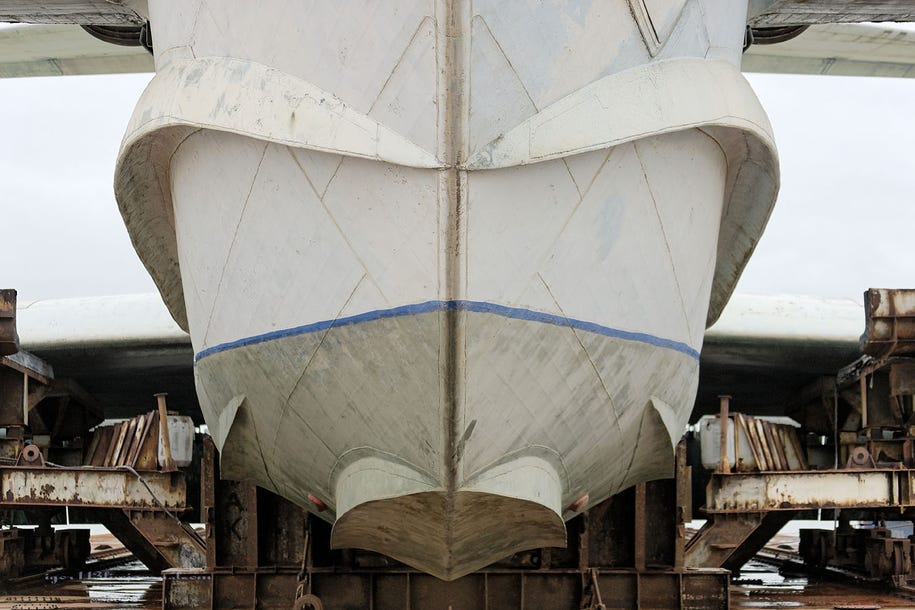 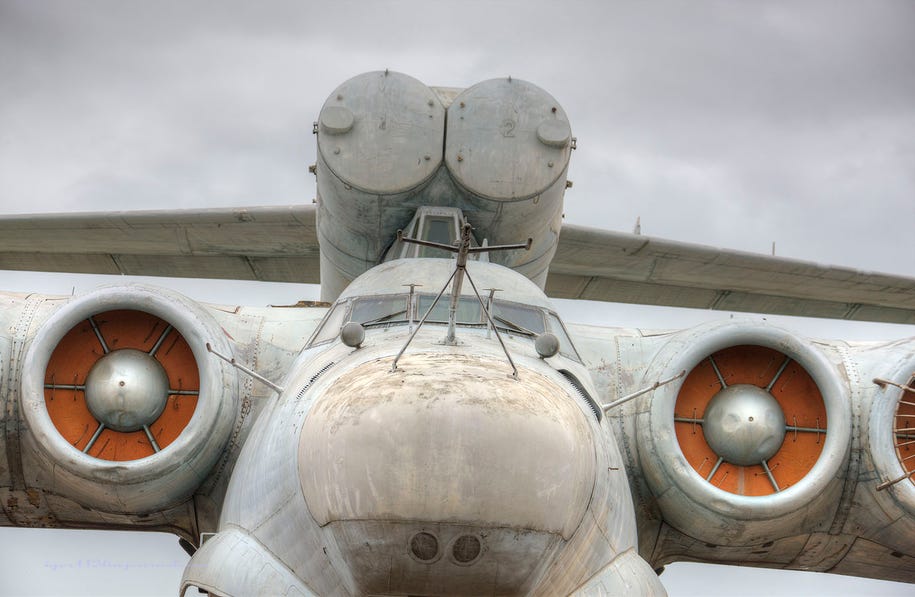 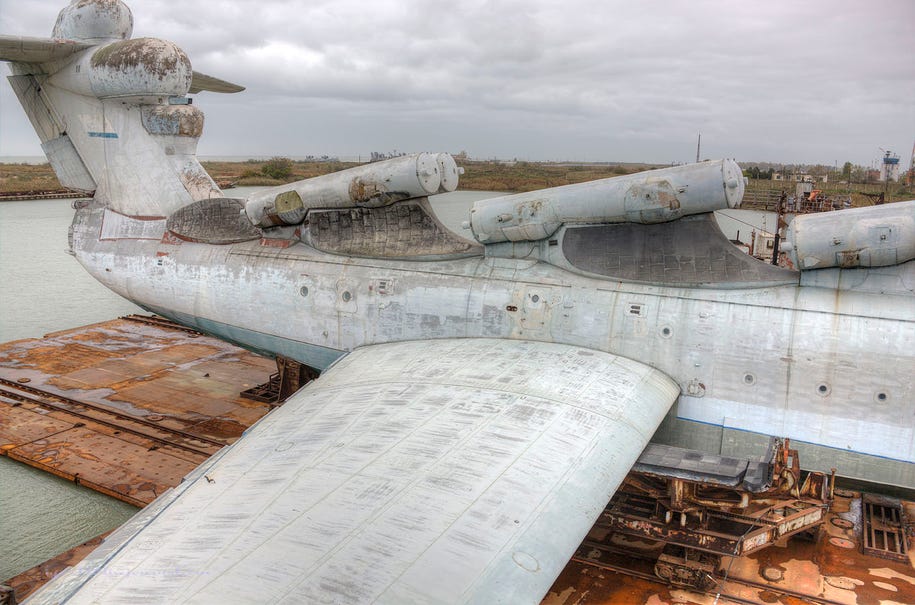 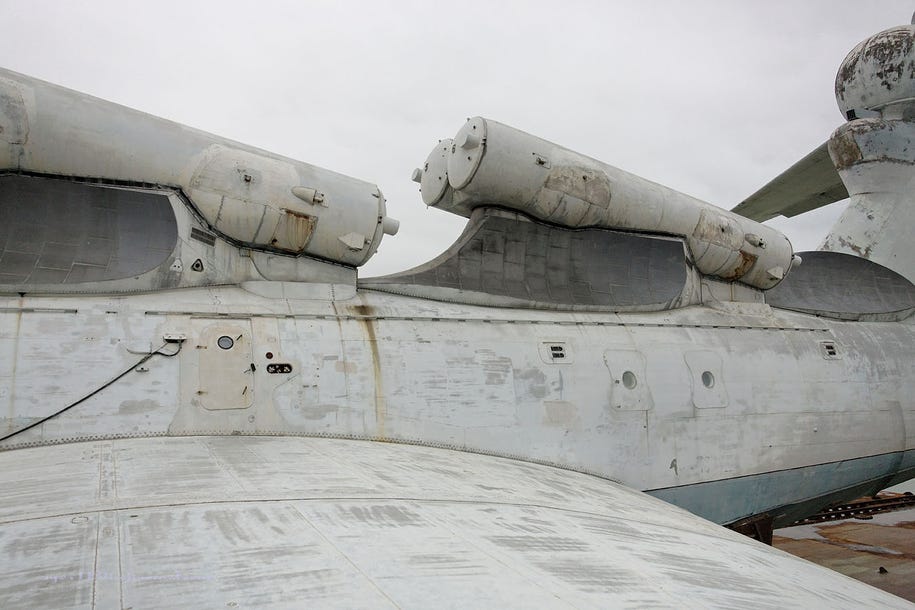 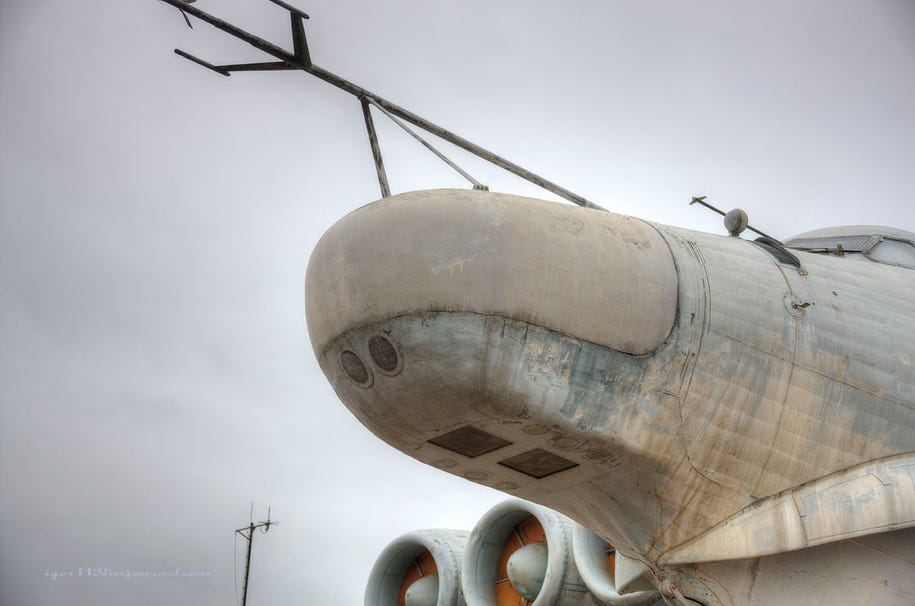 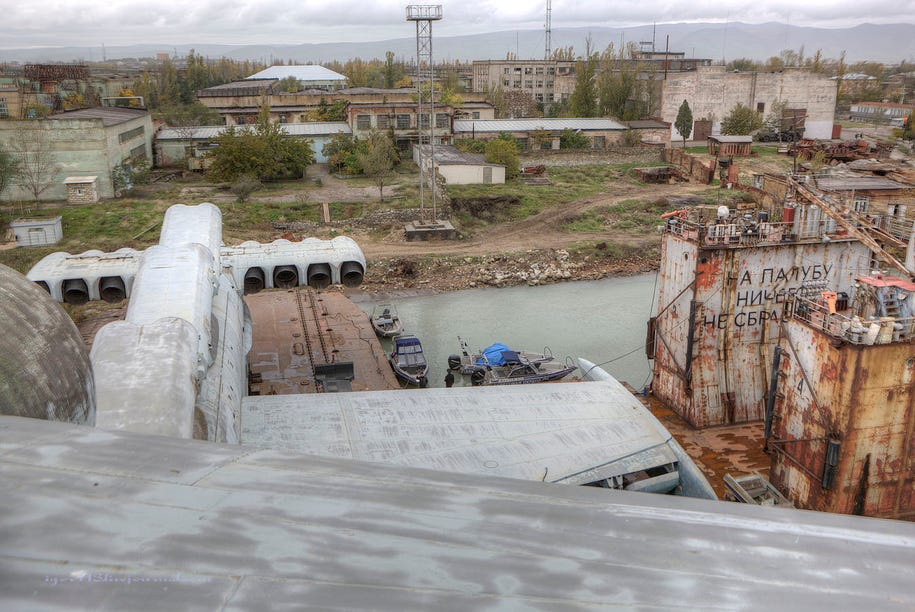 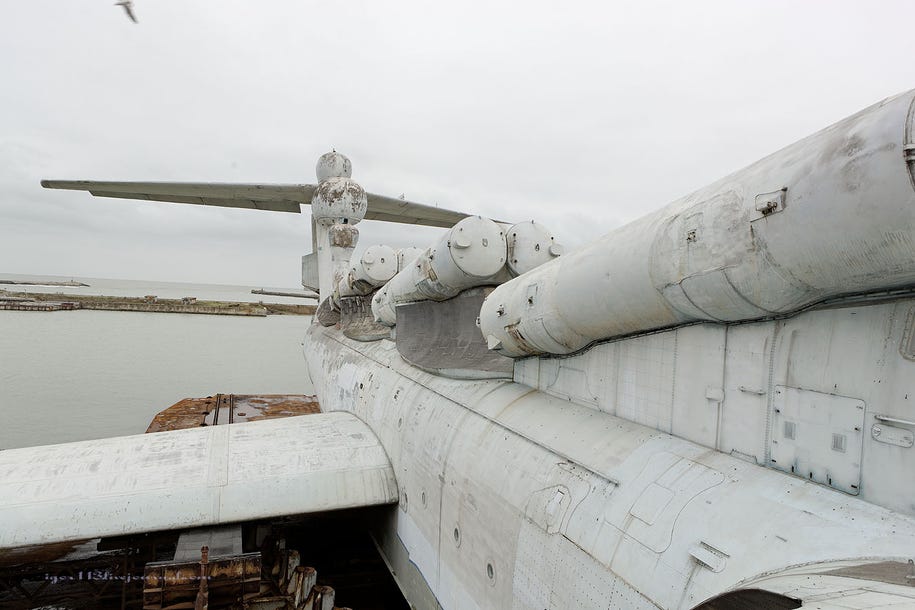 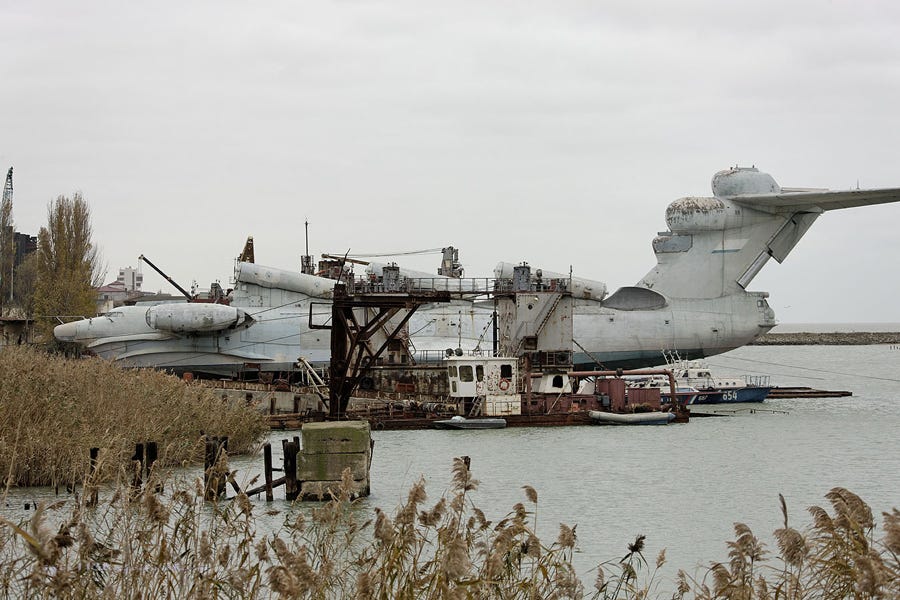 hope we should also make something like this.
M

this will be good for our marines, when they expand marines core and make it separate wing.
.
check out how it fires missile while in flight
Last edited by a moderator: May 10, 2015

mayankkrishna said:
The Soviets Had Big Plans For This Enormous Nuclear Equipped Ekranoplane

In the thick of the Cold War, the Soviet Union built an immense vessel to carry their troops across the seas and into Western Europe.

Equipped with nuclear warheads and able to blast across the sea at 340 mph, the Lun-class Ekranoplane; part plane, part boat, and part hovercraft — is a Ground Effect Vehicle (GEV).
Click to expand...

One of the most practical fastest sea plane ever built. unfortunately demise of CCCP took its toll. GoI should take up this matter, start this project again very practical and effective way to transport troops.

Looking at the title I was expecting something like this_ Param said:
Looking at the title I was expecting something like this_

view this and you will know reason why?

Seriously good military platform that too in 60s. Sad that it got scrapped because of Soviet political one upmanship. Brezhnev screwed it up and the designer of the marvel was left dissolutioned.
M

The Lun ekranoplan weighs 380 tons, has a 148-foot wingspan and can launch six anti-ship missiles from flight. Or rather, it could, before it was retired to a forlorn pier in southern Russia.

The dilapidated plane is the offspring of an even larger prototype ship that so spooked the CIA in the 1960s that they developed an unmanned drone to spy on it, an alleged program detailed in the new book Area 51: An Uncensored History of America's Top Secret Military Base.

Deployed much later, in 1987, the Lun (a more contemporary behemoth) was an improvement over the previous model. It remained in service until the 1990s, when it was mothballed by the Russian military. The once-fearsome Lun will likely never fly again and is now little more than a chunk of aerodynamic scrap metal.

The surviving Lun ekranoplan was built as part of a closely guarded Soviet military program and is one of only two ever completed. As big as it is, its design was preceded by an even larger plane called the KM.

In the mid-1960s, when CIA analysts first saw satellite images of the KM, they knew only that something very large and very fast had appeared on the Caspian Sea. The bewildered analysts dubbed it the "Caspian Sea Monster."

According to a former CIA officer, the agency was so concerned about the discovery it developed an unmanned reconnaissance drone specifically for spying on the KM. The officer, Gene Poteat, and others claim that the government used the Nevada airbase popularly known as Area 51 to design surveillance technology, including the KM drone known as Aquiline.

The official name of the Soviet ship, intelligence officers later learned, was "prototype ship" (abbreviated "KM" from the transliterated Russian). The modest title belied the KM's might. When it first skimmed the waters of the Caspian in 1966, the KM was the largest aircraft on earth. At 295 feet long, capable of flying with a total weight of 600 tons and operating at a cruising speed of 310 miles per hour, it was hardly a mock-up. At a glance the KM looks like it was made to fight Godzilla.

Despite its impressive stats, it was never put into production and in 1980, in an accident described as pilot error, the KM crashed and sank.

At 240 feet long, the Lun is about the size of a 747, not quite as gigantic as the KM. However, unlike its predecessor, the Lun carries six Moskit anti-ship missiles, which it is capable of launching while airborne.
M

For conventional navy ships, the Lun is a nasty adversary. It's able to creep up undetected and deliver a savage pounding.

Its low altitude keeps it below radar and its six supersonic P-270 Moskit anti-ship missiles can reach Mach 3 — more than triple the speed of the subsonic Harpoon missile that is a standard armament for the U.S. Navy. Coming in at such high velocity, the Moskit is within range of a ship's artillery for less than 30 seconds before impact. In comparison, the Harpoon gives defenders two minutes or more.

The Lun also had a maximum range of over 1,200 miles, and could sustain its 15-person crew for five days without resupply. While never tested, the plane was theoretically capable of carrying up to 900 soldiers.

The Lun's current location is a dock in Kaspiysk, in the Russian-controlled republic of Dagestan. It's a potentially volatile resting place: An Islamic insurgency in Dagestan has been compared a small version of the war that ripped apart neighboring Chechnya.


The Lun and similar aircraft are called ekranoplans in Russian or ground effect vehicles (GEVs).

The ground effect is a physical phenomenon that occurs whenever an aircraft is close to touching down. In the seconds prior to landing, for example, the wings and the ground below form a funnel for air molecules. The funnel compresses the air flowing beneath the wings, increasing its pressure and generating more lift. The proximity to the ground also decreases the strength of wingtip vortices — ringlets of air that are a major cause of aerodynamic drag.

Thanks to this effect, GEVs generate more lift and less drag than a conventional aircraft of equivalent size and speed that fly at higher altitudes. Scientists describe GEVs as riding on a dynamic air cushion that acts like the inflated skirt of a hovercraft.


The catch is that the advantages of the ground effect only happen when an ekranoplan is skimming the Earth's surface, so even the massive Lun cruises at just 15 feet of altitude. Since terra firma presents at least an occasional 15-foot obstacle, such as a telephone pole or a mountain, most GEVs operate exclusively over water.

Though the Lun and other ekranoplans often relied on the ground effect cushion, they were capable of flying well above their normal cruising altitude.

The Soviet Union was by far the most advanced and intrepid designer of ground effect vehicles, funding a series of experimental programs and prototypes.

Even so, flying GEVs is no easy task and many models were dogged by accidents and pilot error. When operating at just 15 feet above the surface, if a pilot turns too hard, then the wing is literally in the ground.


As military aircraft, ekranoplans offer several standout features. Their low cruising altitudes are below the range of most radar and their extra lift means they can carry heavier cargo than conventional craft of the same size and can be up to 35 percent more fuel-efficient.

They can take off and land in the water, obviating the need for runways or docks. And while the lumbering cargo ships are lucky to hit 30 miles per hour, ekranoplans can break 300 mph.


The father of the ekranoplan program, Rostislav Alexeyev, was in the cockpit during the first crash of an Orlyonok model GEV.

It was 1975 and Alexeyev was flying in rough weather. The plane's tail section fell off in flight, a failure attributed to a weak metal that was used in the fuselage. Miraculously, Alexeyev managed to steer the wounded craft back to its base, but the damage to his credibility was irreparable. Before the accident, Alexeyev had been the pioneering leader of the Central Hydrofoil Design Bureau and oversaw the flourishing Soviet ekranoplan program of the 1960s which had produced the impressive KM.

Despite Alexeyev's fall from grace, Soviet authorities did not abandon GEVs entirely. The Lun was built in the late 1980s, and is undoubtedly among the greatest triumphs of the ekranoplan program.
You must log in or register to reply here.
Similar threads
Ekranoplan: Caspian Sea Monster
Iranian frigate thrown on a breakwater during a storm in the Caspian Sea
Five littoral states close Caspian Sea for US military
Russian Navy Testing Missile Defense System in Caspian
Share:
Facebook Twitter Reddit WhatsApp Link