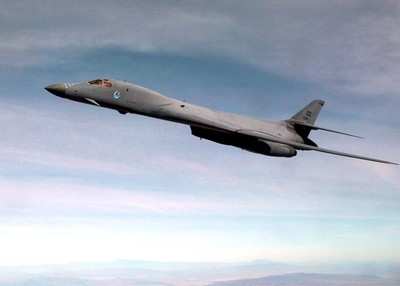 Nuclear-Capable Aircraft May Or May Not Fly Supersonic
During a teleconference with reporters Wednesday, Boeing officials gave new details on a project few were expecting -- plans for a new, long-range bomber for the US Air Force.

Industry publication Defense News reports officials briefed the media on a number of the planemaker's Air Force programs, including Boeing's plans to internally fund an additional 15 C-17 Globemaster III transport planes -- on top of the 15 transports recently ordered by the Pentagon -- in anticipation of a follow-on order in late 2009.

Now, about that bomber...

Senior Boeing officials said the planemaker has partnered with Lockheed Martin to develop a proposal for the Air Force, intended to "put a plane on the ramp in 2018," said Jack Catton, Boeing's vice-president of business development. Catton added he "expects" the first version of the plane "will be nuclear-capable," though Boeing hasn't heard anything definitive from the USAF about that criteria.

The new, long-range bomber would presumably replace the workhorse of the Air Force's bomber fleet, the nearly 60-year-old B-52 Stratofortress (above). The Air Force has already issued desired range, payload and signature guidelines, while also stating the plane "doesn't have to be supersonic."

Though several Pentagon analysts presumed the Air Force had at least a general plan in the works on a B-52 replacement -- Boeing disclosed it had started work on such a proposal in 2006 -- few had any real details about the plan before Wednesday.

The Boeing-Lockheed team are thought to be competing against Northrop Grumman for the contract.