Agantrope said:
Any idea why this one is rejected without any trails?
Click to expand...

Army was looking for more powerful light tanks, like the 120mm Indo /polish one..
DRDO will gain some technical knowledge after the commission of new light tank..

The reason for 105mm on bmp was because of two reasons..
1. Low buget
2. We didn't have the tech-knowledge abt 120mm inside unmanned turret..

The reason for Unmanned turret on Indo/polish tanks because of mounting a 120mm gun..
This unmanned turret make the vehicle light but also very effective..
K

I don't actually know whether I should start a new thread itself. But I didn't see any thread dealing with this topic. Recently when I was searching for the equipments of Indian army, I saw a name 'windy' with the specification-fast attack vehicle,it is Indian origin and already 700 are in service. I searched for photos or further informations,but couldn't find any. Please share your own knowledge and views about this. I'll be supplying fresh informations, if I get any.
If the moderators feel there is no necessity of a fresh thread for this topic, please do merge it with a suitable thread

But IA uses Gypsy for these roles. 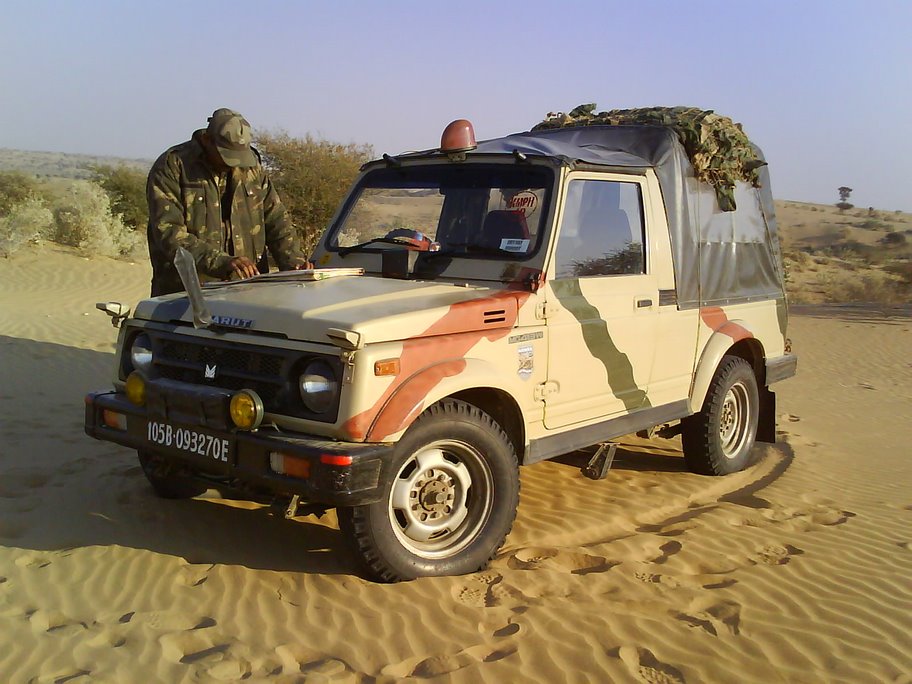 I cant say for sure but recent eyewitness saw something like Mahindra AXE in J&K it is in use With PARA SF..

Kunal Biswas said:
I cant say for sure but recent eyewitness saw something like Mahindra AXE in J&K it is in use With PARA SF..
Click to expand...

i never knew AXE be best in J&K
but per sure comes under Fast Attack Vehicle in Deserts.

Fast attack vehicle-Windy-505 has been developed for multipurpose role as a mobile surveillance and combat support vehicle. Its low silhouette and ability to carry various combinaitons of weapons makes it a force multiplier. A variety of weapon systems can be mounted on this vehicle. It also has day and night vision capability.

COAS released the patent of Fast Attack Vehicle "Windy". It is landmark accomplishment since it is for the first time that the Army and the Corps have been granted patent rights.
The fast attack vehicle Windy was show-cased to the Nation during the Republic Day Parade 2004.

Looks like the platform is the Axe isnt it?

Looks like this system has been around since 2004. And not its not based on the Axe but a separate platform. It that is the case, then how come this platform was not pursued further and the Axe came into picture??

Army chief Gen NC Vij today handed over to the army a patent-the first for any of its innovations-for its high mobility attack vehicle. The patent for Windy 505, designed and developed by the Corps of Electronic and Mechanical Engineers (EME), with high all-terrain mobility, was released on the occasion of the eighth corps reunion held at IEME Centre, Secunderabad, near here. Windy 505 has a power-to-weight ratio 40:1 by far the highest in India. "Nowhere in the world is a vehicle with such width and length available," an official press statement said.
Click to expand...

Not sure about the above source but this is what i got.

I looked the article in the wiki, in google it shows there is a article but when i try to access it wiki says the page is deleted on Jun 5 2010. This is developed by the army itself unlike Arjun MBT. Around 150-200 are in service as of now (2010). Requirement are guarded as a confidential thing and not disclosed in public
K

Thanks for the photo, nandu. But where can these kind of vehicles be used?May be these will be useful in an urban warfare like that was faced by us in Iraque. But in our case ,let it be a war with china or pak,we are not gonna face such a situation,right!!!! somebody please enlighten me.

karna said:
Thanks for the photo, nandu. But where can these kind of vehicles be used?May be these will be useful in an urban warfare like that was faced by us in Iraque. But in our case ,let it be a war with china or pak,we are not gonna face such a situation,right!!!! somebody please enlighten me.
Click to expand...

As u can see in the pic its can be used as a recce, AT-role, can be used by para too..
It mainly used by SF coz it provides flexibility, In situations like ambush soldiers can jump fast take position quickly.. Companies to compete, US-style, to develop armoured carriers for army

India's defence industry is poised at a landmark. On the 25th of August, four Indian companies --- three private and one public --- will submit bids in the MoD's first-ever "Indian industry only" competition to develop a high-tech weapon system for the defence forces.

The four companies --- Tata Motors; the Mahindra Group; L&T; and the MoD-owned Ordnance Factory Board (OFB) --- are competing to design and build 2600 new-generation Future Infantry Combat Vehicles (F-ICVs) to replace the Indian Army's aging fleet of Russian-designed BMP-IIs. In an American-style showdown, two of these vendors will be nominated to develop a prototype each and the winning design selected for the F-ICV.

While the cost of developing and manufacturing 2600 FICVs can only be roughly estimated, senior executives from two of the competing companies say that the bill could add up to Rs 50,000 crores. This will make it India's most expensive defence contract so far.

The MoD will fund 80% of the cost of developing the FICV; the selected contractor will pay just 20%. It has been mandated that the FICV must have an indigenous content of at least 50%. With a development time of 7-8 years, the FICV should be ready by 2018.

This indigenous development of an FICV has been enabled by the Defence Procurement Procedure of 2008 (DPP-2008), which lays down a "Make" procedure for developing "high-tech, complex systems" through Indian industry. Following this procedure, the MoD surveyed private and public industry to zero in on potential contractors. The four companies identified were then issued with an Expression of Interest (EoI), which listed out the capabilities that the army expected from the FICV. Sources familiar with the EoI say that the FICV will be operated by 3 crewmembers, and carry 7 additional soldiers with combat loads; it must provide protection from bullets fired by 14.5 millimetre calibre weapons; it must be amphibious, i.e. capable of floating in water; it must be air-transportable, which would imply a maximum weight of 18-20 tonnes; and it must have a cannon and be capable of firing anti-tank missiles.

In their responses to the EoI on 25th August, each of the four competitors will detail their proposal for developing the FICV; the key project milestones; the estimated capital expenditure; the technology they will include and how that will be developed or purchased; and the minimum order that they would need to set up a financially viable production line.

Those responses will be evaluated by the MoD's Integrated Project Management Team (IPMT), which will select two contractors. Over a fixed number of years the two contractors will develop their respective FICV prototypes. The Indian Army will select the better of the two by carrying out field trials.

But this is not a winner-take-all competition. Since the MoD wants to retain two production lines, the winner will be given 65-70% of the order; the runner-up will build 30-35% of the army's requirement of FICVs, provided that company agrees to build the winning design at the same cost as the winner.

With two assembly lines operating, India's private defence players expect that the FICV contract will create an eco-system of suppliers extending far beyond the winner of the contract. Brig Khutab Hai, who heads the Mahindra Group's defence business, says, "The FICV project will be a huge boost to the Indian defence industry in R&D, manufacture, and in developing Tier-1 and Tier-2 suppliers from the small and medium sector industries."

This MoD attempt to harness private contractors is backstopped by the public sector: the Defence R&D Organisation (DRDO) believes that it will be approached for key technologies; and the Ordnance Factory Board (OFB), which manufactures the BMP-II at Medak, in Andhra Pradesh, for production assistance.

At least two of the private contractors believe that it would be wasteful to set up a Greenfield production line. Says a senior executive in one of the contending companies, "Ordnance Factory, Medak is a national asset and it would be lying idle at that time. We could build the FICV at Medak --- on a Government-Owned-Company-Operated (GOCO) basis --- instead of setting up a brand new facility."

Singh said:
1. APC/IFV are not defined in terms of their firepower but by their role.

3. From what I read previously US showed off the Strykers but the Army hasn't expressed any sincere interest ? And the US troops aren't too happy with the Strykers
Click to expand...

Yes you are right bro Strykers is some what a failed project no one in the world is showing interest on the vehicle but the US is desperately trying to sell that to india it seems, in Iraq it was not even able to to give protection against RPG's and for that extra armour(slat-armor), protection was required and when they provided the extra protection the weight of the vehicle increased a lot

this is the internal report from US army
http://www.youtube.com/watch?v=KKZDWhosbIA
http://www.abovetopsecret.com/forum/thread131385/pg1
C

well it seems we already placed a order i guess to mahindra for RG 31
Global Defence: India's Mahindra and UK’s BAE Systems will start manufacturing RG-31

OFB made 4x4 MPV, used by Indian Army and CRPF/BSF..
Click to expand...

This is disappointing!
Looks like they did minor changes on BMP-2, Almost like 70s model, this is no FICV!
Today's ICVs are more concentrated on making more armored and unmanned turret with 30mm-40mm cannons combine with AGL and MGs..
Focused on more passenger and firepower plus the mobility..
I don't see such thing on this model...