America Alone: The End of the World as We Know It

America Alone: The End of the World as We Know It

If you're familiar with the work of Mark Steyn, there's probably no need to read this review. You either love him or you hate him - no one is ambivalent about his provocative, thought-provoking, and bitingly funny newspaper and magazine columns.
If you aren't familiar with his work, his book America Alone: The End of the World as We Know It is pretty much the same as his essays, only more so. (Much of his work can be read at his website.) My description of his work as "provocative, thought-provocative, and bitingly funny" should tip you off to how I feel about Steyn, and needless to say, I devoured America Alone in near-record time.
Steyn's thesis, a recurring feature in his post-9/11 columns (many of which have been incorporated into the text of America Alone), is that cultural trends - particularly, heavy immigration from predominantly Muslim countries - are changing Europe almost beyond recognition:
...much of what we loosely call the Western world will not survive the twenty-first century, and much of it will effectively disappear within our lifetimes, including many if not most European countries. There'll probably still be a geographical area on the map marked as Italy or the Netherlands - probably - just as in Istanbul there's still a building known as Hagia Sophia, or St. Sophia's Cathedral. But it's not a cathedral; it's merely a designation for a piece of real estate. Likewise, Italy and the Netherlands will merely be designations for real estate.
To put it succinctly, the birth rate among European Muslims is much higher than that of the dominant culture, so a major population shift seems almost inevitable. This would not be a problem, except that Europe's young Muslims ("youths" as they are inevitably described in news stories about rioting in the French suburbs) are more alienated and radicalized than their parents and even their youthful co-religionists in predominantly Muslim countries. Worst of all, the people of Europe - including the established Christian churches - have lost all confidence in their own cultures. This is not seen as a sign of sensitivity or openness by Islamic radicals, unfortunately, but a sign of weakness. "If you're a teenager in most European cities these days," writes Steyn, "you've a choice between two competing identities - a robust confident Islamic identity or a tentative post-nationalist cringingly apologetic European identity."
The United States is the exception to this disturbing trend, according to Steyn. (Hence the title, America Alone.) But it would be short-sighted to assume the great boogeyman of "globalization" is allowing American culture and values to run roughshod over the rest of the world, as the Adbusters crowd would have you believe. On the contrary: the Saudis have poured billions of dollars in oil money into promoting their strict, intolerant, and violent strain of the Islamic faith all over the world.
No wonder Nada Farooq, whose husband was arrested as part of a heavily publicized plot to murder Canadian Prime Minister Stephen Harper, was devoted to hard-line, Saudi-promoted Wahabbism instead of the more moderate Islam of her Pakistani parents. "The biggest globalization success story of recent years is not McDonald's or Microsoft but Islamism," writes Steyn.
Needless to say, this thesis will make many readers uncomfortable, and even I have a few concerns about America Alone. For Steyn's prediction of a predominantly Muslim Europe to come true, Europeans will have to stand by and let it happen. It's more likely, unfortunately, that they will turn to neo-fascist and extreme-right political leaders in ever larger numbers. (A recent poll shows Jean-Marie Le Pen polling even higher today than he did at this point before the 2002 French Presidential election, when he won nearly a fifth of the popular vote.) Steyn's rhetoric sometimes goes over the top, as well:
On a morning [9/11] when big government failed, the only good news came from private individuals. The first three planes were effectively an airborne European Union, where the rights of the citizens had been appropriated by the FAA's flying nanny state. Up there where the air is rarified, all your liberties have been regulated away: there's no smoking, there's 100 percent gun control, you're obliged by law to do everything the cabin crew tell you... passengers surrendered more and more rights for the illusion of security, and, as a result, thousands died. On the fourth plane, Todd Beamer and others reclaimed these rights and demonstrated that they could exercise them more efficiently than government.
Interesting analogy, but is Steyn really suggesting that there shouldn't be "100 percent gun control" on commercial flights? And it's hard to see how a strong military response to Islamic terror be carried out other than by a government (although, had American military units been given more autonomy as to how they carried out the war in Iraq - instead of bowing to the will of a central authority that looks more incompetent by the day - maybe the situation wouldn't be quite so grim).
Whatever questions I may have about Steyn's thesis, I'm once again left in awe at Steyn's ability as a writer. No one else could make "the end of the world as we know it" this entertaining. America Alone is essential reading - and, thanks to Amazon, you can get it even if your local bookstore neglected to order enough copies.

Mark Steyn's bestselling book is the antidote to foreign policy realism. It argues that "stability" and "containment" are mere self-delusion in a world that is undergoing one of the fastest demographic transformations in human history. America Alone is the first book to tie together the key forces in the world today - demographic decline and civilizational exhaustion in the West and Islamism and freelance nuclearization in the East. The intersection of these trends is already changing our world: Europe and Russia will be semi-Islamic in their political character within an election cycle or three, and much of the rest of the map will be re-primitivized. If America cannot save old allies or find new ones, she will find herself trying to hold at bay a very hostile planet. The danger is not a dominant China or a resurgent Russia but a world without order at all, a new Dark Ages of reverse globalization in which the pathologies of the furthest fringes of the map overwhelm the great powers.
``t their own sagging population profile. Granted that most European Muslims are not Islamist terrorists, most Islamist terrorists have passed through European Muslim communities to one degree or another: the July 7th London Tube bombers, British subjects born and bred, are only the most extreme face of a new pan-Islamist identity that poses a profound challenge to some of the oldest nation states in the world.
In this fast-changing world, there is no "stability." America, the non-imperial superpower, is happy to send its movies and pop songs and cheeseburgers around the planet but shrinks from promoting the values that underpin its economic dominance - and in so doing risks squandering the American moment and bequeathing the world a new Dark Ages. 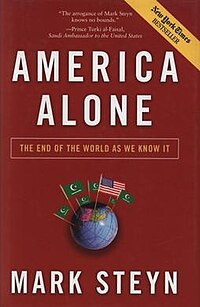 America Alone: The end of the world as we know it.

May that day come as soon as possible...
Although, this is just another Islamophobia that I just hate to see. The guy is trying to portrait Islam as an evil that expands towards what is good, trampling all in its way until the good guys Americans remain as a lonely island of light and democracy. It's just pure crap...
All of the main points of the book are also the pillars of the current US propaganda. US accuses Iran of making a nuclear bomb, then a guy writes a book about Islamization and freelance nuclearization.
The same anti-Islamism is appearing in western Europe, actually. There are numerous right-wing parties in France, Netherlands etc. that vow to assimilate Muslims, stop their imigration and expansion, and strip them of their culture.
T

I think Steyn is right about the demographics though, within a few decades islamic population of europe will be significant enough that politicians will start to court their minority vote.
Once that happens western civilisation in europe is pretty much done.
Europe has historically had lucky escape after lucky escape. The mongols were turned back not by force of arms but by a succession crisis after the death of Ogotai. After Constantinople fell to Mehmet III, Christendom stopped Islam at Lepanto and Later on at Vienna by luck as much as by military prowess. How Ironic that the final fall of European civilisation will occur without a single battle being fought.
Last edited: Apr 17, 2010

You're right about Europe's lucky escapes, I can't agree more. Wasn't it Ogadai and Mehmet II?
A few ironic facts: Polish saved the German culture by changing the tide in the battle of Vienna. The Germans repaid in WW2 I guess...

We'll see how much will the west allow Islam to expand. I for one don't see it as an expansion of faith and culture as much as mere population migration. Those people might assimilate, just like all US imigrants do. Who knows?
But don't write off the west that easily... Their leaders know more than us mere mortals.
You must log in or register to reply here.
Similar threads
Economic situation in Western Europe and North America in wake of Russian special military operation in Ukraine
Hinduphobic Hindustudies in america.
Indian brands in the Americas
Latin America the impact of the Spanish empire in modern times
Share:
Facebook Twitter Reddit WhatsApp Link