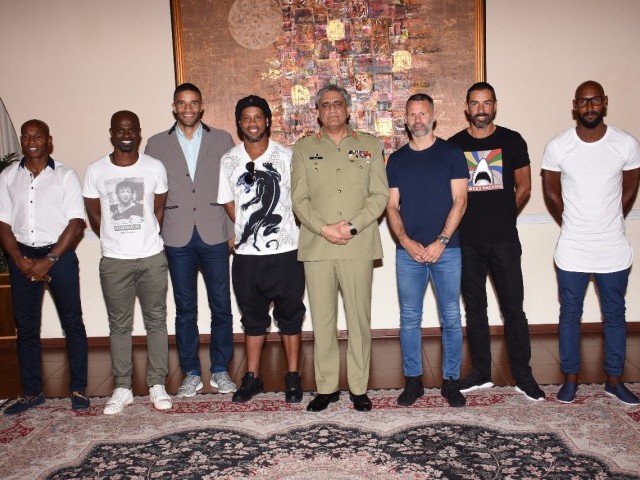 KARACHI: It had been long, very long since Karachi last witnessed a major sporting event. Six years to be exact.

Then Leisure Leagues came to the city and along with it, Ronaldinho and friends in arguably the greatest footballing event Pakistan has ever witnessed.

A city starved of all sporting action was suddenly on Saturday given the opportunity to watch some of the greatest footballers to have ever lived – arguably the biggest sportsmen to have ever laid foot on these lands, bigger perhaps than even the likes of Sachin Tendulkar and Sir Vivian Richards.

These were no mere mortals. They were World Cup winners, Ballon d’Or winners. These were history-makers who once were the greatest players in their respective positions. Players an entire generation across the world has grown up worshipping.

‘Ronaldinho and friends’ land in Pakistan

And Karachi, starved of all such entertainment, responded only like a sport-crazed city of 20 million can.

Throngs upon throngs rushed to the Edhi Hockey Stadium – the only appropriate venue available given that that one of the world’s largest cities doesn’t even have a single football field fit for such an event.

They say football isn’t very popular in Karachi, but the Edhi Stadium failed to get that memo. The crowd let out one goosebump-inducing roar after another.

Fans roared the loudest for Giggs and Ronaldinho, the two captains, but wouldn’t it have been blasphemous had world cup winners Roberto Carlos and Robert Pires not reduced the entire crowd of over 15,000 into one huge euphoric entity? The very ground shook when they came on, one after the other.

Then a goal was scored and the crowd responded with noise so loud that it will echo till next week.

For the first time in its history, Karachi truly tasted the joys of football. Its appetite for the global sport now discovered, it wants more.

COAS welcomes international footballers, thanks them for coming to Pakistan

“I know there is room for cricket in Pakistan, but I’m there is also room for football,” former Liverpool and England goalkeeper David James said ahead of the match.

Legendary Arsenal and France winger Pirès echoed his sentiments: “I know cricket is number one in this country, but maybe some kids want to play football too. And we can give advice to these young players.

“I hear there is a lot of talent in Pakistan,” added Manchester United great Giggs. “We hope this is a start and provides a passageway for these young players to go on to bigger and better things.”

Beaming at the experience, Pakistani striker Kaleemullah said: “So proud of this. It was a big deal playing with these players.”

Pakistani midfielder Saadullah shared his compatriot’s joy. “I’ve played all over the world but this is the biggest deal for me. It shows that Pakistan is ready to host events and will help revive other sports such as cricket in the country.”

In the match itself, the Ronaldinho-7 defeated the Giggs-7 by two goals to one. Pirès scored first for Ronaldinho’s side, but former France striker Nicolas Anelka equalised some time afterwards. Saadullah then scored the winning goal for Ronaldinho’s team.

According to a statement issued by Inter-Services Public Relations (ISPR), Gen Qamar thanked the footballers for visiting the country. He told them that Pakistan is a peace-loving and sports-loving country.

“Sports promote peace, and your visit is most welcomed by all Pakistanis, especially young footballers,” the army chief said.

The footballers thanked Gen Qamar for organising their tour and his support. They called Pakistan a beautiful country and said they looked forward to enjoying their trip.

Gen Qamar also thanked the Leisure Leagues for organising the event in collaboration with the Pakistan Army and promoting peace and sports.