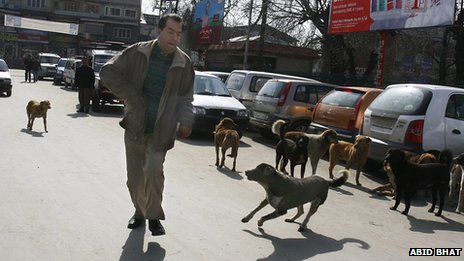 Officials say there are more than 90,000 stray dogs in Srinagar alone

The streets of Srinagar, the summer capital of Indian-administered Kashmir, have witnessed much killing in the past two decades of conflict.

However, as the violence has ebbed, residents are facing an unusual enemy - stray dogs.

The canines have been storming its streets, chasing cars, pulling down bicycle riders and often attacking pedestrians and school children. In some cases, even soldiers patrolling the streets have become their target.

Health authorities say 53,925 people - mostly children - have been bitten by stray dogs in the 10 districts of Indian-administered Kashmir in the past four years.

Some of the victims have died of rabies. Records at Srinagar's Anti-Rabies Clinic show 12 dog bite-related deaths in the last three years alone.

Things have become so bad that the Jammu and Kashmir State Human Rights Commission has described dog attacks as "violation of human rights". 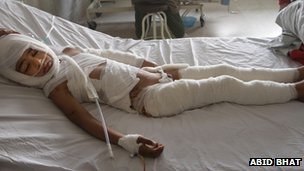 Mudasir Ahmad Wangnoo, a 12-year-old student, is one of the latest victims.

One evening in January, he was attacked by almost two dozen stray dogs, biting him nearly 125 times.

The dogs injured his neck, face and windpipe. Doctors found perforations caused by the bites in his heart that caused pneumopericardium- a medical condition in which air enters the heart.

Syed Sajad Hussain, 40, who rescued Mudasir from the dogs, said the attack was "extremely terrible".

"The incident was similar to one you must have seen on Animal Planet - dozens of hyenas kill a helpless beast," he said.

Fortunately Mudasir survived the attack, but others such as four-year-old Sehrab Wagay of south Kashmir's Pulwama, succumbed to rabies last August after being bitten by feral dogs.

"The danger is real," warns Dr Saleem-ur-Rehman, Director of the Health Department . "On our side we are quick at providing anti-rabies drugs to hospitals and anti-rabies clinics but municipal authorities must act."

A count by the municipality found more than 90,000 stray dogs in Srinagar city. There has been no survey in the rest of the region, where dog bite cases outnumber those in Srinagar.

Unofficial estimates and local NGOs put the number of dogs in the valley at more than a million, triggering fears of increasing dog-man conflict in the next few years if the dog population is not checked.

Recently, people in the city staged a protest demanding a cull of stray dogs.

Noted poet Zareef Ahmad Zareef, who led the protest march, told the BBC that after years of "failure", the government had very little time to act now.

"We have given the authorities a deadline of a few weeks to end the canine menace. Once it finishes the civil society will handle it of its own," says Mr Zareef, whose brother had to be given 40 anti-rabies injections after being attacked by stray dogs.

"The government and animal right activists feel we are subhumans."

Caught between animal rights activists, who believe that the stray dogs should be sterilised, and irate residents, who want the dogs to be killed, the city's municipality has been grasping for a solution.

They have planned dog shelters, but residents of the areas where the pounds are proposed have protested, saying that they "won't tolerate the noise of thousands of barking dogs," says municipal official Fayaz Ahmad Bala. The municipality is now planning to sterilise dogs.

Last month, Kashmiri Governor NN Vohra reportedly directed the police to take "immediate action" to remove dogs from inside the national park where a paramilitary security bunker is located.

The armed forces have often been accused by locals of using the dogs as a "first line of security" in the dark against suspected insurgents or protesters.

The municipality's website even accuses troops of feeding dogs. Civil rights groups also say the troops are "consciously feeding canines" and increasing their population to be used as a "tool of surveillance".

However, paramilitary spokesman Mohasin Shahid rejected the allegations saying: "Stray dogs are nuisance to troops as well. If dogs sneak in our camps it doesn't mean we feed them or encourage their breeding."

Even the army said recently that the dogs were posing problems for them as well, after one of their soldeirs was injured in a dog attack.

Meanwhile, residents of Srinagar and across much of the rest of Indian-administered Kashmir continue to live in fear of the stray dogs.

Baba Umar is a journalist with Tehelka magazine

Its a hack job against Army. It is up to the state to take care of these stray dogs, why blame the army unnecessarily.

Exactly, they ave a habit of blaming the army even for a mosquito bite. Look at the author, he is a Tehelka guy. Well, it is true that stray dogs are indeed a problem in Kashmir, but the way he wrote this article is suspect.
L

Good for these dogs, they must be a nuisance for terrorists roaming the streets at night....lol

I fondly remember the bakarwal dogs that I had during my tenure there. They would give forwarning of any ambushes, and suspicious movement, when we were on patrols.

There was one chap we called "Sheroo" at a forward post (that was surrouneded by 7 Pak posts), he was like a radar at night. If he growled at night, the sentry just lobbed a grenade over the walls.

While i visited Jammu, There were usually 5-10 dogs per post..

Natural radar and thermal at your service..

Best thing is to shift these dogs instead of Killing them, They are useful..

Kill the once which are infected..

Wannabe jihadis afraid of dogs? Why don't they pelt the stones and finish this nuisense once and for all

Tehelka is a stray with its stray stories.

Dogs used to clean and orderly environment tend to growl or be aggressive towards people who tend to be shabby and untidy.
L

Kunal Biswas said:
While i visited Jammu, There were usually 5-10 dogs per post..

Natural radar and thermal at your service..
Click to expand...

That is natural, dogs recognise the good guys...and stick to them

Also, the troops miss their families and pet these stary dogs as an unconcious outlet for the emotions they have for their families. Strays are suckers for love and care, and so they stay where they get care and good langaar food...

Atleast these stray dogs are useful in Kashmir. They are rowdies at night in Bangalore.

I suggest the streets of Srinagar and Kashmir should be swelled with Dogs, as they are more loyal than Kashmiris and help our security forces!!

maomao said:
I suggest the streets of Srinagar and Kashmir should be swelled with Dogs, as they are more loyal than Kashmiris and help our security forces!!
Click to expand...

maomao said:
I suggest the streets of Srinagar and Kashmir should be swelled with Dogs, as they are more loyal than Kashmiris and help our security