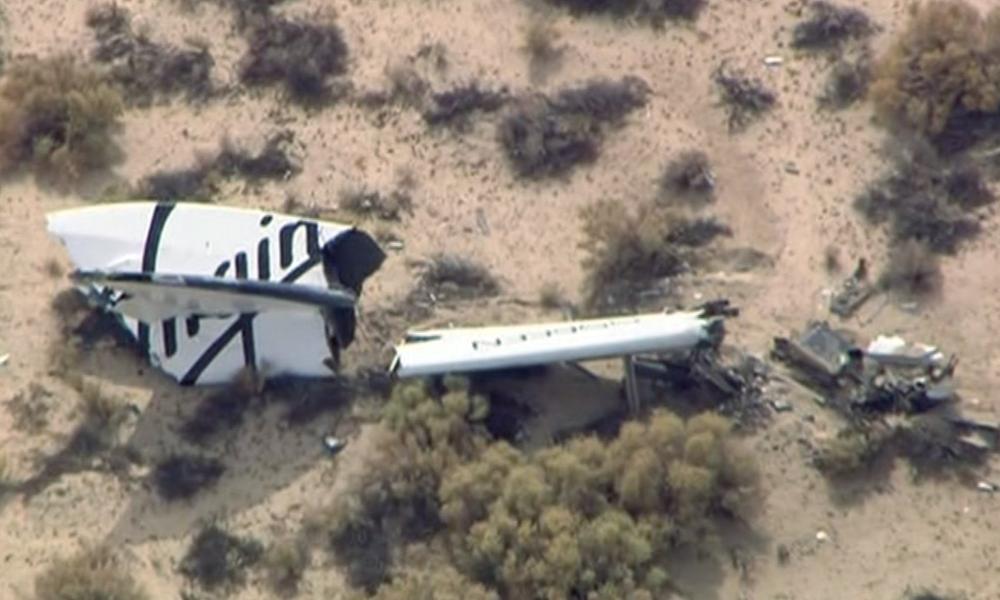 A Virgin Galactic spacecraft crashed after an explosion during a test flight over the Mojave desert on Friday, killing one of the pilots, seriously injuring another and leaving debris scattered over a wide area.

The plane, SpaceShipTwo, was undertaking a test flight as part of Sir Richard Branson's plans for commercial space travel when a "serious anomaly" occurred, the company said.

Witnesses reported the spacecraft broke apart soon after it was detached from the launch plane that carries it to 45,000ft. Rescuers found one of the pilots dead on the ground. The other, who appeared to have deployed an emergency parachute, was airlifted to a hospital with serious injuries.

Virgin Galactic said that SpaceShipTwo was powered by a fuel mix that had not previously been used in flight, although it had been tested extensively on the ground. The company was unable to say whether the change to the fuel mix offered an explanation for the accident, which happened just before 11am local time.

The crash served as another stark reminder the dangers of space exploration, three days after an unmanned rocket on supply mission to the international space station exploded seconds after takeoff from a Nasa launch facility in Virginia.

"Space is hard, and today was a tough day," said George Whitesides, CEO and president of Virgin Galactic, at a news conference. Branson was on his way to Mojave and would arrive on Saturday, he said. "We are going to be supporting the investigation as we figure out what happened today and we are going to get through it," Whitesides said.

Two pilots are usually on board for Virgin Galactic's test flights, launched from a base in the Mojave desert. The identities of those involved in Friday's accident were not immediately disclosed.

The California Highway Patrol confirmed that one person was dead and another had suffered "major injuries" in the accident, which happened at 10.51am local time.

spokesman for Kern County sheriff said the co-pilot of the plane had been killed, while the pilot ejected.

SpaceShipTwo is the second-stage launch vehicle for Virgin Galactic's space flight program. It is designed to disconnect from the propeller-engined WhiteKnightTwo (WK2) craft and ascend to space under rocket power, then returns to earth.

Ken Brown, a photographer who witnessed the accident, said that the craft exploded after it was launched from the carrier vehicle. "They separated, the rocket seemed to start fine as it's done in the past three tests, then there was a big puff. We could see that major pieces were coming down."

Brown said that he and blogger Doug Messier, who was with him, found a piece of debris across the road with the remains of one of the pilots. "I'm still shaking."

Messier, a blogger who runs the website Parabolic Arc, which reports on space news, wrote on Twitter that he witnessed the crash from Jawbone Station, which is on a ridge overlooking the desert where the craft crashed. "We saw the twin contrails of WhiteKnightTwo overhead. They do that prior to a drop," he tweeted. "SpaceShipTwo dropped. From what I could tell, motor fired and then stopped then fired again. I think that's what happened."

Messier reported that clouds made it hard to see clearly, but it appeared that SpaceShipTwo "broke apart and started coming down in pieces over the desert." He added: "We started seeing clouds of dirt where pieces of the ship came down. One after another. At least three." Messier reported then driving to one of the debris sites. "Debris from the ship was scattered all over the road," he said.

The Federal Aviation Administration said it was investigating the accident. It said: "Just after 10am PT today, ground controllers at the Mojave Spaceport lost contact with SpaceShipTwo, an experimental space flight vehicle. The incident occurred over the Mojave desert shortly after the space flight vehicle separated from WhiteKnightTwo, the vehicle that carried it aloft.

"Two crew members were on board SpaceShipTwo at the time of the incident. WhiteKnightTwo remained airborne after the incident."

NBC News reported that the aircraft was forced to wait on the runway at the test site for three hours before it took off, while the ground team assessed the weather conditions.

vestment company, has suffered setbacks before. In 2011, SpaceShip Two experienced a malfunction during re-entry during a test flight, though the pilots were able to correct the problem and land the craft successfully. Analysts have been sceptical about whether Branson's plans for commercial space travel can be achieved: the launch date has been repeatedly delayed.

John Lodsdon, a professor emeritus in political science at George Washington University, specialising in space and space policy, said test flights such the one undertaken on Friday were inherently risky. "You conduct tests because you're not sure that things are going to work," said Lodsdon, who served as a member of the board that investigated the Columbia space shuttle disaster in 2003. "Failure is a not unexpected outcome of a test, and this, unfortunately, was a very catastrophic failure."

Lodsdon told the Guardian that he thought the accident might "slow down the emergence of a private suborbital business," and said that it "remains to be seen whether it will be so negative an impact that it will be impossible to revive the business." Such an outcome would be "unfortunate, I would say sad," he said.

Chris Hadfield, a Canadian astronaut and former test pilot, who warned last year in that a crash by a Virgin Galactic craft was possible, said on Friday that he hoped the cause of the accident would be determined swiftly.

"Trying to do something complicated doesn't happen easily, and it doesn't happen without cost," he told the Guardian by telephone from Toronto. "The resolve that the professionals in the business have is what makes it happen. This is the true nature of being a test pilot or an astronaut: to see both the cost and the benefit, and to recognise that if we want to explore - if we want to go faster or go higher - then that doesn't come for free."

The accident is the second this week to hit a private US space company. On Tuesday, an Orbital Sciences Antares rocket exploded 15 seconds after liftoff from Wallops Island, Virginia, destroying a cargo ship bound for the International Space Station.

About 800 people, including Tom Hanks and Angelina Jolie, had paid to book a two-hour journey into space on SpaceShipTwo, which would include a planned five minutes of weightlessness.

Last year Hadfield, whose tweeted photos, videos and rendition of David Bowie's Space Oddity brought him global fame during a stint on the International Space Station, questioned what kind of experience future space tourists will have with Virgin Galactic, saying they are "just going to go up and fall back down again".

He said: "They'll get a few minutes of weightlessness, and they'll see the black of the universe. And they'll see the curve of the Earth and the horizon, because they'll be above the air. But whether that'll be enough for the quarter-million-dollar price tag, I don't know."
Click to expand...

It's been a pretty bad week for the private space industry. Such setbacks are part and parcel of the industry, but the loss of life is very saddening, luckily the other accident did not cause any damage in that respect.

Human Space Flight should be handled by NASA. There is no point playing around with lives of people. NASA has the know-how, let them do it. Private companies can focus on satellite launches.

One wonders if the craft was certified fit by NASA since they alone have the expertise to do so as also the experience.
A

I don't think space flight should be the sole domain of government space agencies. NASA cannot claim a spotless record, one just need to look back into Challenger and Discovery tragedies (there were previous deaths from the Gemini and Apollo programs). Tragedies will always happen in space programs but that should not be an excuse to displace private companies. I think private companies should be allowed to venture into space in a tightly regulated environment.
You must log in or register to reply here.
Similar threads
Virgin Galactic spacecraft makes maiden crewed flight
Virgin to Build Mumbai-Pune Hyperloop: Travel Time Minutes!!
Chinese businessmen paid $300,000 to students for virgins forofficials
Chinese court orders man to pay woman for violating virginity right
Share:
Facebook Twitter Reddit WhatsApp Link