Union Defence Minister Rajnath Singh on Thursday made a big announcement during his keynote address at the Republic Bharat Summit claiming that US Defence Secretary Lloyd Austin has agreed to the transfer of key technology to India. However, it cannot be revealed right now. He further said that Prime Minister Narendra Modi wants India to be self-reliant in order to fulfil its own needs rather than relying on other countries. "Now there are several countries who want to invest in India's defence sector", added Rajnath Singh.

"PM Modi made it clear in 2014 that India does not have to depend on other countries to meet its needs, because it is not in the interest of the country. We have to become Aatmanirbhar. You will be happy to know that other countries across the world have expressed their willingness to invest in India's defence sector," said Raksha Mantri.

"Rajnath Singh further added, "As Raksha Mantri I can justify how Aatmanirbhar Bharat will be a game-changer for us. Just a few days ago, I spoke to the US Defence Secretary Minister Lloyd Austin, he has given permission to transfer a big technology to India and said if it has to be manufactured, we will do it in India. However, I can't reveal it right now".

Defence Minister further said, "As Defence Ministers, there are 310 items that we have listed down, that will be Made In India till 2025 and won’t be imported at any cost. In the Public sector undertaking, there are more than 3,500 items that are going to be Indianised. These are not small numbers and many more major policy decisions have been made which will be beneficial for Aatmanirbhar Bharat. We want to make India a platform not only for Make in India but invite other nations in the behest of Make for World."

Hailing the 'self-reliant India' motto, Defence Minister Rajnath Singh stressed, "Aatmanirbhar Bharat can provide hope for the entire world. The world's manufacturing hub can not be just one country. Now MNCs are looking to move to countries like India."


Rajnath Singh lauds success on economic front
Speaking about India's economy, Rajnath Singh said, "Working on the Nation First policy, India can become a developed nation. When we got Independence, India was poor. We can't deny this reality. It was poor. That's why it took time for it to move on the path of development. In 1950, the Indian economy was the 6th economy in the world. In 1960, we slipped to the 8th spot. In 1970, we slipped to the 9th spot. In 1980, it exited the list of top 10 economies". He hailed the fact that India has surpassed the UK and is one of the top 5 economies in the world today. 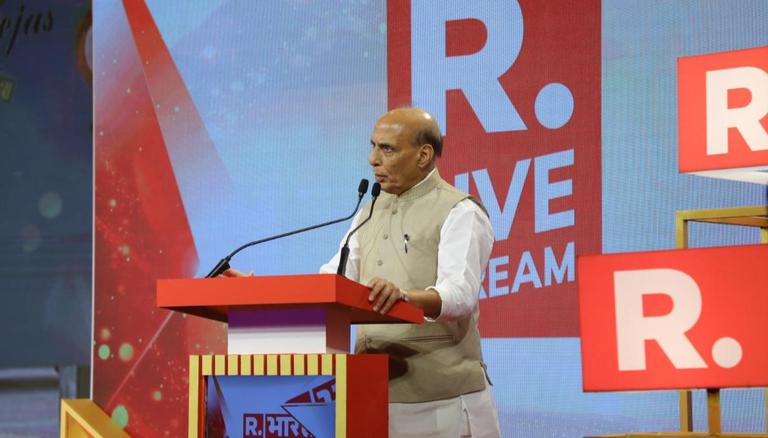 www.republicworld.com
You must log in or register to reply here.
Similar threads
US Defence Secretary has agreed to the transfer of a key technology, which he cannot reveal yet.
EU Pledges Fighter Jet Transfers to Ukraine
Govt dissolves OFB, transfers employees and assets to 7 PSUs
US embargoes sale and transfer of AH-1Z Viper Helicopters to Pakistan
Share:
Facebook Twitter Reddit WhatsApp Link