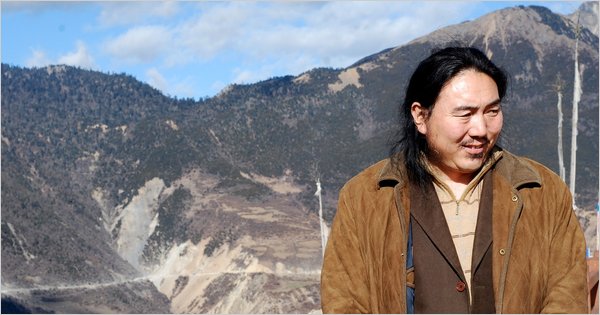 Karma Samdrup and his two younger brothers were the kind of Tibetans who put the Chinese Communist Party at ease. Vaunted environmentalists, they were pillars of their community who steered clear of politics. Even better, Mr. Samdrup had become a rich philanthropist and planned to donate part of his immense Tibetan art collection to a state-run museum.
This week, however, Mr. Samdrup, 42, frail and gaunt after six months in police custody, was marched into a courtroom to face accusations of "tomb robbing," a charge that had been originally dropped 12 years ago by the police.

His real crime, say friends and relatives, was trying to save his brothers from labor camp and torture — their punishment for accusing a local police chief of hunting protected animals in a Tibetan nature preserve.

Exile groups and rights advocates say the prosecution of Mr. Samdrup and his brothers is part of a broader assault on prominent Tibetans around China, a campaign that has sent a chill through a community that once thought itself immune to the heavy hand of Beijing.

Their cases might have gone unnoticed outside Tibet if it were not for the stature of Mr. Samdrup, a darling of the official media whose organization has won grants from Ford Motor, Friends of the Earth and a foundation run by the film star Jet Li.

Those who are following Mr. Samdrup's predicament said the authorities were simply trying to silence him. "Even by Chinese legal standards, the prosecution's case is thin at best," said Nicholas Bequelin, a researcher at Human Rights Watch in Hong Kong. "Experience tells us the outcome has already been decided."

Since rioting two years ago convulsed Tibetan areas of China, rights groups say scores of artists, intellectuals, students and businesspeople have been detained and sentenced to prison on charges of subverting state power or seeking to "split" Tibet from China.

They include Tashi Dhondup, a young folk singer who was sent to a labor camp for a song titled "Torture Without a Trace," and Kunchok Tsephel, a government-employed environmentalist who was given a 15-year term for "disclosing state secrets" after he wrote about the riots on his Web site.

Kate Saunders of the International Campaign for Tibet said the recent arrests of about 50 poets, bloggers and songwriters represented the most concerted attack on the educated and artistic elite since the Cultural Revolution ended in 1976.

"It appears that almost any expression of Tibetan identity can be categorized as separatist or reactionary," she said in an interview from London. "These are not angry monks raising their fists in protest but people working within the system who are engaged in work that's essential for a healthy civil society."

Among the more prominent people arrested is Tragyal, an editor at a state-run publishing house in Qinghai Province whose whereabouts have been unclear since April, not long after his latest book came out with contents decidedly unflattering to the Chinese government. The book, "The Line Between Sky and Earth," was a marked departure for Tragyal, 47, more commonly known by the pen name Shogdung, who was previously derided by many Tibetans for being "an official intellectual."

But like many moderate Tibetans, especially those in the more gently administered provinces east of Tibet, he was dismayed by the crackdown that followed the 2008 unrest and included such sentiments in his book. In one passage, he describes Tibet as "a terrifying battleground," adding: "At the junctions of monasteries and villages, soldiers parade. Such places are full of spies. It's so frightening."

His daughter, Yeshi Tsomo, said the family had been unsure of his whereabouts since the police took him from their home. "We've been to the detention center more than 20 times, but we have never been allowed in," she said.

Those who study Beijing's Tibet policy say the authorities appear to have extended their deep-seated suspicions to the Tibetan educated and well-to-do, a tactic some say could radicalize a segment of the population that had come to accept the imperfections of Chinese rule.

"For the first time, we're seeing the government attack a group of people who previously had nothing to do with politics," said Robbie Barnett, director of the modern Tibetan studies program at Columbia University. "These are cultural products of the Communist Party, people who were brought up by the system."

In some cases, Mr. Barnett and others say, the crackdown has prompted formerly risk-averse Tibetans to challenge the status quo through books, blog posts and poems.

Karma Samdrup was in many ways the idealized Tibetan. Fluent in Mandarin but devoted to his cultural identity, he is the subject of two Chinese-language books that lionized his role as the founder of a state-backed environmental organization in Qinghai Province.

"He's incredibly generous, lavishing money on charitable causes," said Tsering Woeser, a Tibetan blogger who has known him for a decade.

Mr. Samdrup was also a scrappy entrepreneur who made a fortune trading ornamental beads and caterpillar fungus, a parasite highly valued by traditional Chinese medicine. His collection of art and relics, 20 years in the making, is said to be among the most extensive in private hands.
His troubles began when his two younger brothers, Rinchen Samdrup and Jigme Namgyal, took on a police official in Chamdo Prefecture whom they accused of leading a hunting party into a nature preserve. The brothers, who had started their own environmental group, tried to bring attention to their accusations of illegal hunting and last August found themselves in jail.
Relatives say Mr. Namgyal was tortured and then sentenced to 21 months at a labor camp for "harming national security." Rinchen Samdrup, who has also been lauded by the Chinese media in the past, is still awaiting trial on several charges, including having set up the environmental group illegally.

By jumping to his brothers' defense, Karma Samdrup apparently angered some powerful people. In January, he was arrested far from home in Sichuan Province and taken to a small city in the far western region of Xinjiang, where in 1998 he was accused of buying artifacts from a looted tomb. According to his lawyer, Pu Zhiqiang, those charges were dropped after the police realized that he had a license to buy and sell cultural relics.

In a sign that Mr. Samdrup's case has reached the highest echelons of power, the two books about him were recently banned by government censors in Beijing.Mr. Pu says the legal process against his client has been flawed. He was not allowed to see Mr. Samdrup for six months, and it was only on the eve of the trial that the two were allowed to meet. Their entire 30-minute exchange, he said, was videotaped by the police, making a frank exchange nearly impossible.

During the hearing on Tuesday, according to the lawyer, Mr. Samdrup pleaded not guilty and told the court his interrogation had been accompanied by daily beatings from the police and fellow prisoners. He also said he was drugged with a substance that made his eyes and ears bleed, all part of an effort to force him to sign a confession. His wife estimates he lost at least 40 pounds in custody.

Although the trial is closed to the public, Ms. Woeser said many Tibetans were nervously awaiting news of the proceedings, which continued Wednesday.

I am sure our Chinese friends would like to throw lights on these incidences.
You must log in or register to reply here.
Similar threads
Oppression of Tibetans in Tibet/China
Tibetans have truth, China has guns: Dalai Lama
Making Miracles: Tibetans conquer poverty
Development of Buddhist/Tibetan Culture and Art
Share:
Facebook Twitter Reddit WhatsApp Link