I'm surprised this is not being discussed. This is the news of the century right now:

Pakistani intelligence gives funding, training and sanctuary to the Afghan Taliban on a scale much larger than previously thought, a report says. 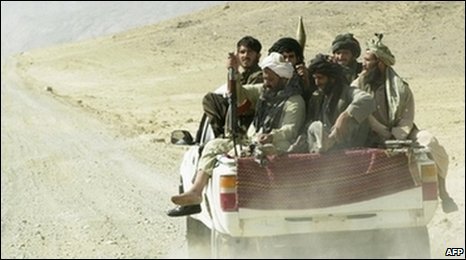 Pakistan's links with the Taliban could go much deeper than thought

A spokesman said the allegations were "rubbish" and part of a malicious campaign against the country's military and security agencies.

The LSE report comes at the end of one of the deadliest weeks for Nato troops in Afghanistan, with more than 30 soldiers killed.

Links between the Taliban and Pakistan's intelligence service have long been suspected, but the report's author - Harvard analyst Matt Waldman - says there is real evidence of extensive co-operation between the two.

"This goes far beyond just limited, or occasional support," he said. "This is very significant levels of support being provided by the ISI.

"We're also saying this is official policy of that agency, and we're saying that it is very extensive. It is both at an operational level, and at a strategic level, right at the senior leadership of the Taliban movement."

Some alleged that ISI agents had even attended meetings of the Taliban's top leadership council, the so-called Quetta shura. They claim that by backing the insurgents Pakistan's security service is trying to undermine Indian influence in Afghanistan. 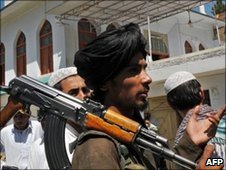 Taliban field commanders were
interviewed by the report's author ​
"These accounts were corroborated by former Taliban ministers, a Western analyst and a senior UN official based in Kabul, who said the Taliban largely depend on funding from the ISI and groups in Gulf countries," the report said.

With US troops due to begin leaving next year, Pakistan and other regional players are increasingly seeking ways to assert their influence in Afghanistan, analysts say.

Pakistan has long been accused of using the Taliban to further its foreign policy interests in the country. The ISI first became involved in funding and training militants in Afghanistan after the Soviet invasion in 1979.

Since 2001, however, it has been a key US ally, receiving billions of dollars in aid in return for helping fight al-Qaeda

"Pakistan appears to be playing a double-game of astonishing magnitude," the report says.

But Islamabad says it is working with its international partners in hunting down the Taliban.

And the Taliban's former ambassador to Pakistan, Abdul Salam Zaeef, says there is no proof of a link between the ISI and the Afghan Taliban.

"I have no proof that Pakistan is supporting the Taliban," he told the BBC, "or that the ISI is providing money to them... or other support to provide weapons."

Even so, Pakistan's role in Afghanistan is viewed as critical.

Last week Afghan intelligence chief Amrullah Saleh resigned, saying he had become an obstacle to plans to talk to the Taliban.

Mr Saleh told Reuters news agency a day after quitting that the ISI was "part of the landscape of destruction" in Afghanistan and accused Pakistan of sheltering Taliban leaders in safe houses.

Pakistan has always denied such claims and points to arrests and military offensives against the militants on its side of the border. Nevertheless, parts of the tribal north-west of Pakistan bordering Afghanistan remain strongholds for the militants.

The BBC's Quentin Sommerville in Kabul says there is a growing understanding that military action alone will not be enough to bring peace in Afghanistan.

"Without a change in Pakistani behaviour it will be difficult if not impossible for international forces and the Afghan government to make progress against the insurgency," the report concludes.

Now, I ought to clarify why this is the 'news of the century'. This ain't nothin' new. We've known this since time immemorial. But what it is, is an acknowledgment, by a completely non-arbitrary body, that what we were saying is the truth. It is an acknowledgment that, despite all the fancy one-room universities and 'aid camps for refugees' Pakistan is running in Afghanistan, its activities there have been, and remain, largely nefarious. It is an acknowledgment that Pakistan has no-good role to play in Afghanistan, and that despite its fleeting attempts at conciliatory persuasiveness, its role in Afghanistan has been, and will always be one of self-interest, strategic pawning and exclusiveness of human resources and transportational links for everybody else. As if, as if, Afghanistan were their own country.

I got news for you homeboy, it ain't.

Now, if we were smart, we'd use this report to approach the United States and the 'Coalition of the [Un]willing' to sideline Pakistan out of Afghanistan. We'd print this all over the media, particularly the Afghan media, so that they know what dogs they're being made of. And we'd approach coalition nations in Europe, which do this human rights thing, to limit cooperation with Pakistan. Tackling this issue with its European allies is the way to the global hegemon's heart.
A

look buddy it is know to everybody in world that Pakistan ISI helps Afghanistan Taliban foe their gain nothing new and this report isn`t going to change the views of either government of america or Britain. Everybody is playing according to their interest and in present scenario it seems Pakistan `s is gaining in Afghanistan. so there is no point of complaining to /or going to country with this report because nothing is going to happen. our policy makers must find out some ways to out smart it

anoop_mig25 said:
look buddy it is know to everybody in world that Pakistan ISI helps Afghanistan Taliban foe their gain nothing new and this report isn`t going to change the views of either government of america or Britain. Everybody is playing according to their interest and in present scenario it seems Pakistan `s is gaining in Afghanistan. so there is no point of complaining to /or going to country with this report because nothing is going to happen. our policy makers must find out some ways to out smart it
Click to expand...

Nothing will happen... if we do nothin' about it.

As much as the game of cold-hearted, cruel self-interest plays out at a subterranean level, and will always play out, modern wars and covert activities require that simultaneous engagement be made in the diplomatic and the political realms.

There was a time when corporate self-interest thought that governments would tow the business line always, simply because there was so much to be gained from being rapacious and cunning. Man covetous- or so it was thought. And so, they ignored left-wing organizations and anti corporatist movements until they entrenched themselves in the public consciousness. Today, it is impossible for western governments to allow their corporations to be purely avaricious while extracting from the third world, without playing the 'Great Game'. The 'Great Game' being this whole aura of giving, or appearing to give, back to the country from which you are taking. Companies make it a major part of their PR strategem, and 'green policies' and 'equity business' are an important part of shareholders' preferences.

The same pans out in politics between nations. The battle for hearts and minds is one that must be engaged in. Especially in a world where opinions are 'standard', popular sentiment supreme and information 'instantaneous'. This is an incredible opportunity to show the people of Afghanistan how dastardly the Pakistanies really are. What we have suffered at their hands for far too long. And the excellent double game of deception and the language of two-talk they speak. Opportunities like these are what the Foreign Office is made of. This is the stuff of legends, and the Foreign Off must take advantage of it.

'Figuring out ways to outsmart it' is not mutually exclusive to a propagandic war. These wars are fought at multiple levels. And a government divided into various departments so that they may more efficiently manage its various facets.

The question is not: whether we should do one or the other? But rather how we may most efficiently do both.

Attached is the full report.

Now, this report has been ridiculed by Pakistani analysts as expected and embraced by Indian analysts again as expected but hopefully this will open up a whole new debate in the West about Pak's double game in Astan.