How to Join Territorial Army of India

The Territorial Army (TA) provide excellent opportunities for employed young men to join the Indian army and earn the glorious uniform. This is also helpful for one to full fill his dream of becoming an officer and joining Indian army if he wasn't able to do it earlier with regular entries. Not only this Territorial Army brings you lots of other opportunities, in short it provides you an adventurous life with your regular job.

What is Territorial Army India?

This is an excellent opportunity given by Government of India to young men who are well settled in their professional life. They can now join Territorial Army as an officer and prove their dream of wearing army officer uniform. The best thing is, you can serve the nation in both way- as a civilian and as a soldier. On the top of this, you *don't* need to loose or primary professional, let it be a MNC job, govt job or your own business.
Sounds Interesting...??

Who is eligible for Territorial Army India?

(Note : Serving Employees of Police/Paramilitary Forces are not eligible.)

You must be well settled and employed in any of the profession mentioned above. Territorial Army is not for just passed out candidates or someone who has just 2-3 years of working experience. To make sure you clear the Territorial Army Exams, it is better you get well settled in your current profession first. Also if you have missed out regular entries due to age factor, it doesn't mean you are perfect for Territorial Army now, you need to fulfil all eligibility requirements first and being gainfully employed will help you to get shortlisted for next round.
Terms and Conditions of Territorial Army

Like regular entries, TA grants you a commissioned rank of Lieutenant.
Pay and Allowances and privileges will be same as regular Army Officers when embodied for training and military service.
Promotions up to Lt Col by time scale subject to fulfilling laid down criteria. Promotion to Colonel and Brigadier by selection.
Officers commissioned in TA Infantry may be called out for military service for longer duration depending on requirement.

The officer and men of the Territorial Army have been decorated for their gallantry and distinguished services. So for they have earned 02 Ati Vishisht Seva Medal (AVSM), 15 VSM, 05 Vir Chakra, 13 Sena Medal, 25 Mentioned-in-Despatches and 43 COAS commendation card.

What is the selection procedure of Territorial Army

For Civilian Candidates:
Candidates whose applications forms are found, correct after scrutinisation will be called for screening, by a Preliminary Interview Board (PIB), at their respective TA Group Headquarters. Candidates selected by PIB should provide brief BIO-DATA to include details about their employment with monthly income from all sources at the time of documentation immediately after PIB. Successful candidates will further undergo a Service Selection Board (SSB) and Medical Board for final selection


For Ex Service Officers Only:
Ex Service Officers of three services as a candidate should send their application alongwith enclosures as mentioned in application form to Addl Directorate General TA, Integrated HQ of MoD (Army), 'L' Block, New Delhi-01.
The candidates are screened by an Army HQ Selection Board (ASB) held at Addl Dte Gen TA Army HQ, 'L' Block, New Delhi which is followed by a Medical Board for successful candidates
Source: How to Join Territorial Army India in 2013 | SSB Interview Tips & Coaching | SSBCrack 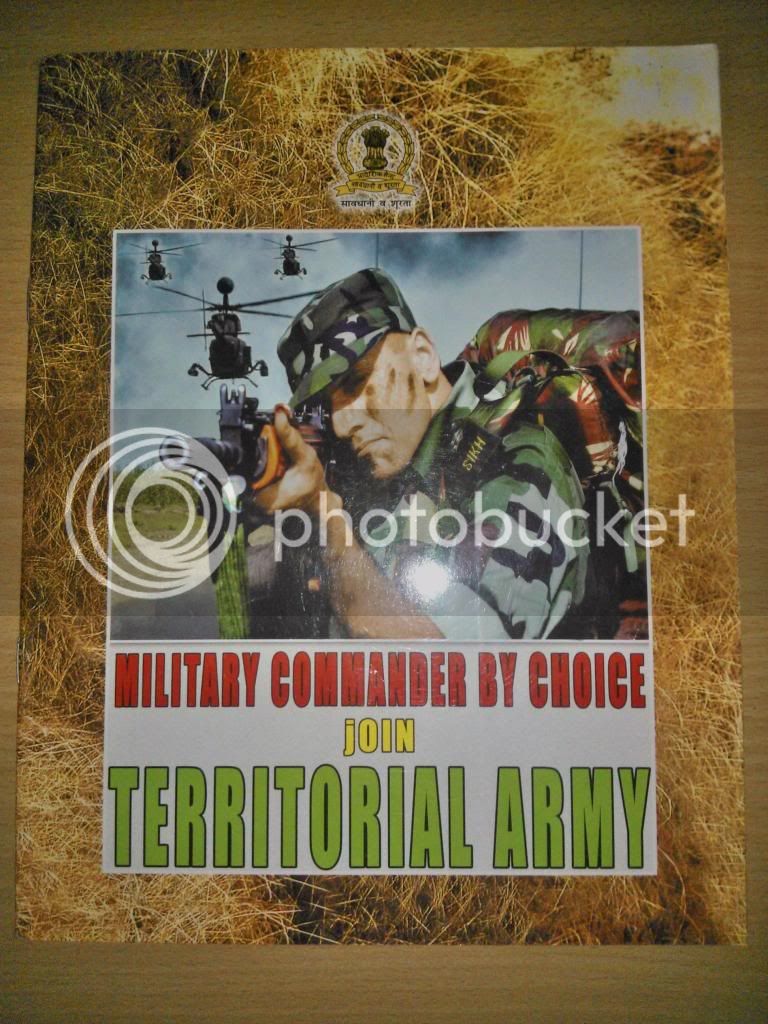 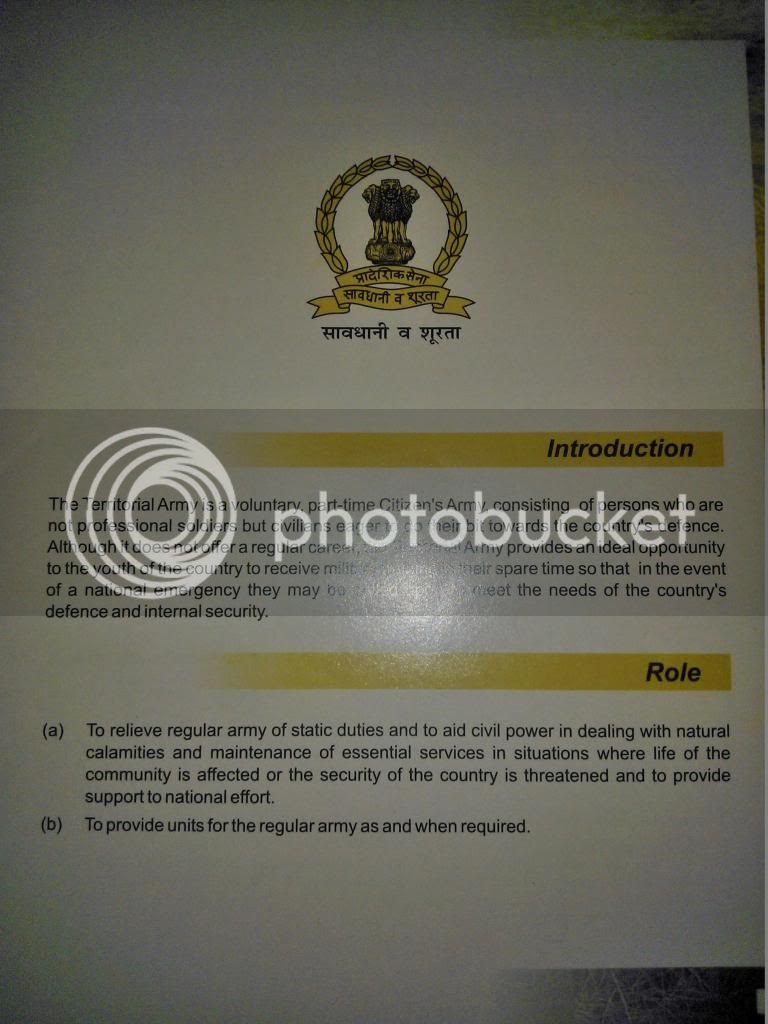 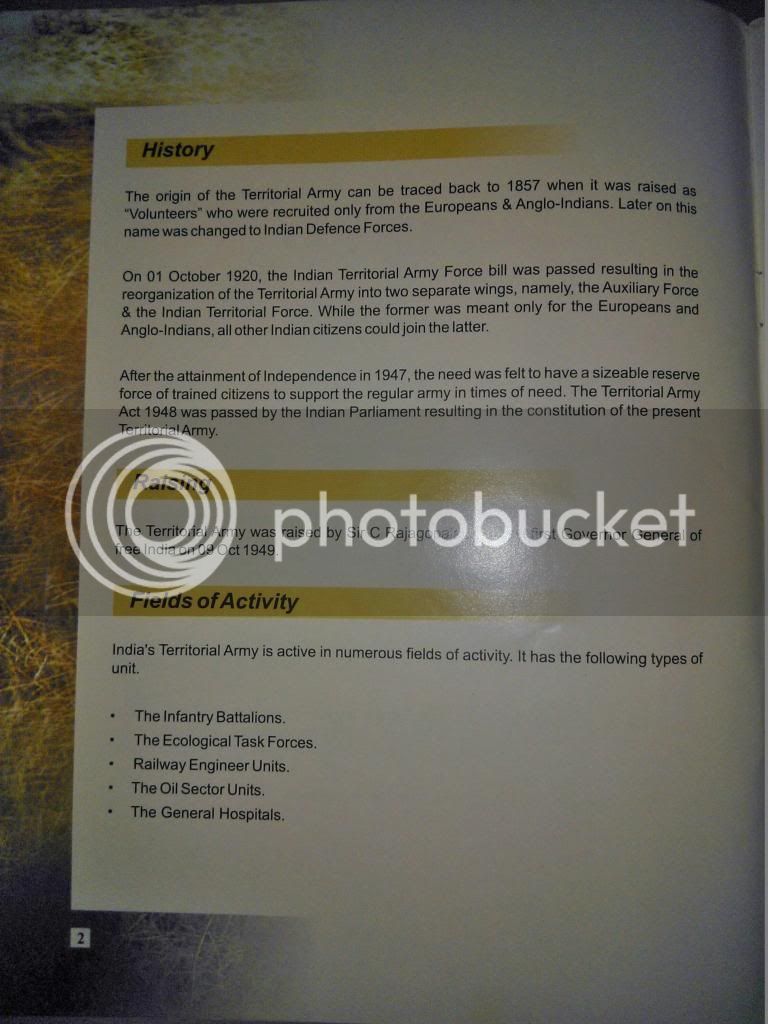 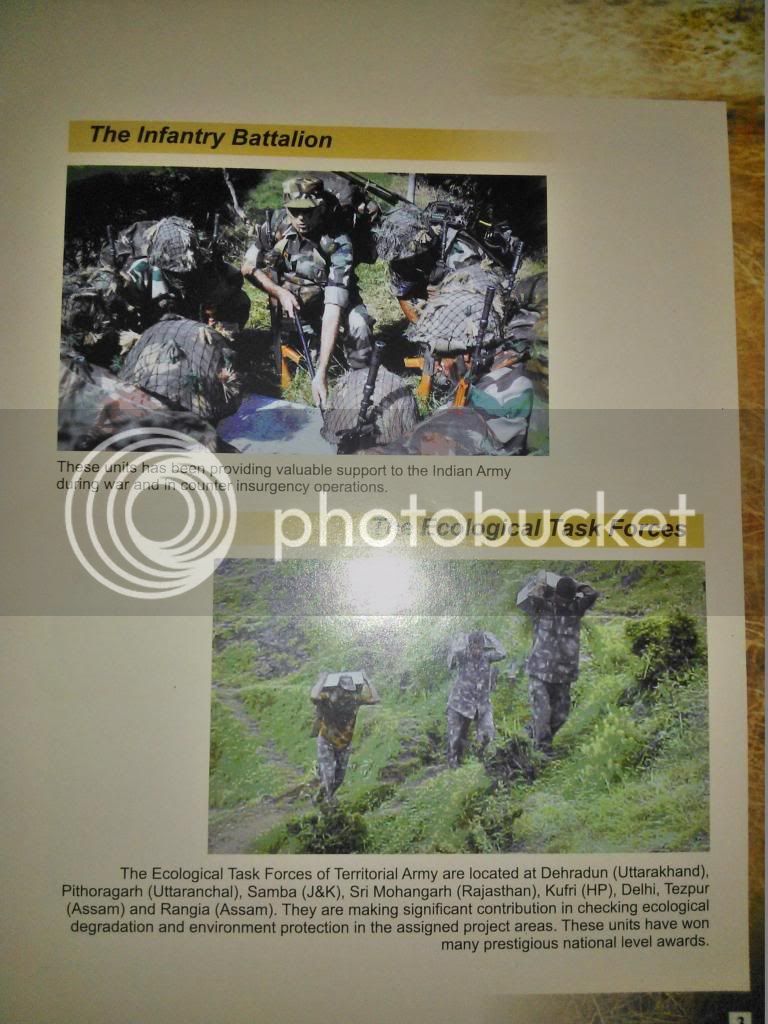 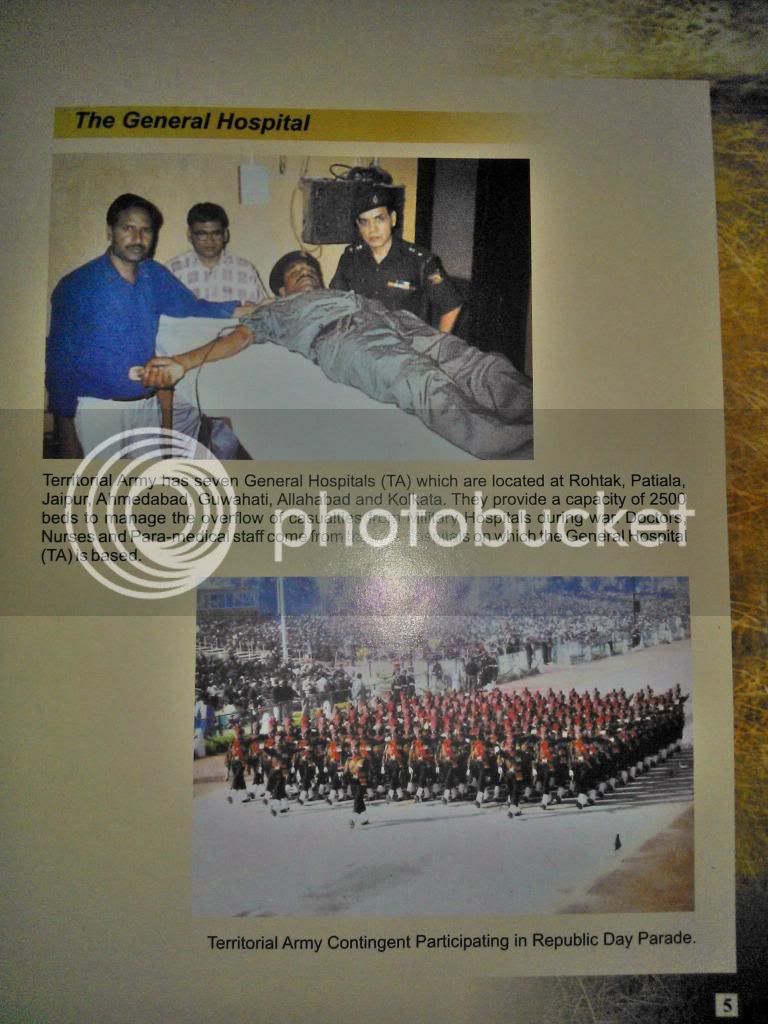 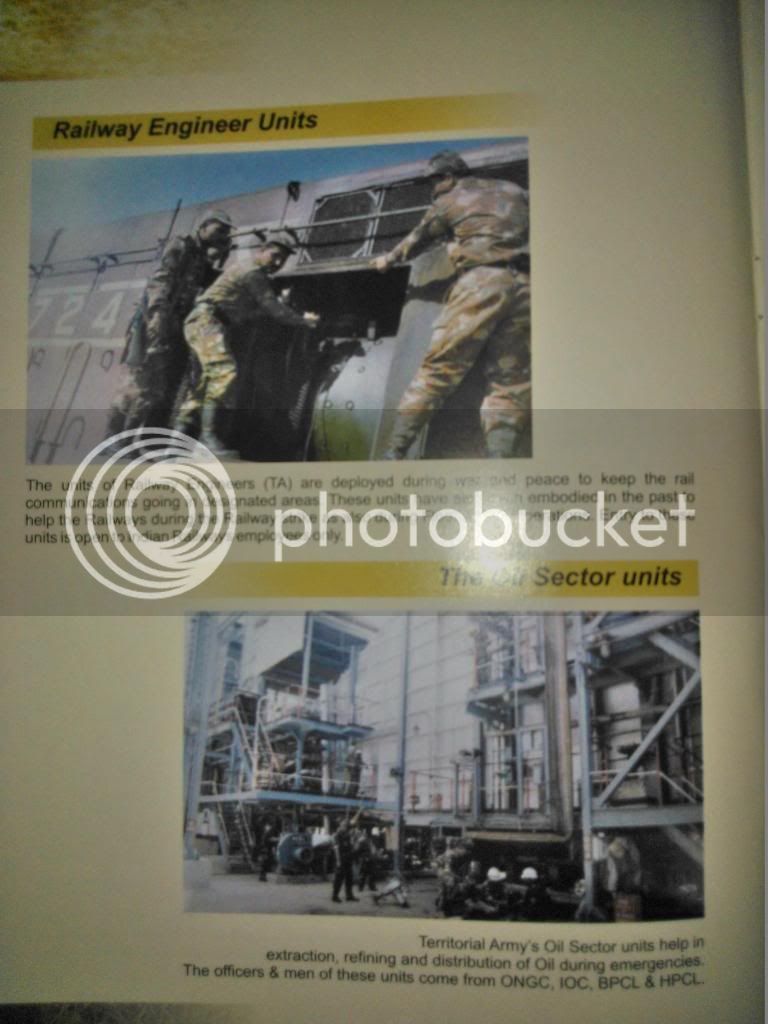 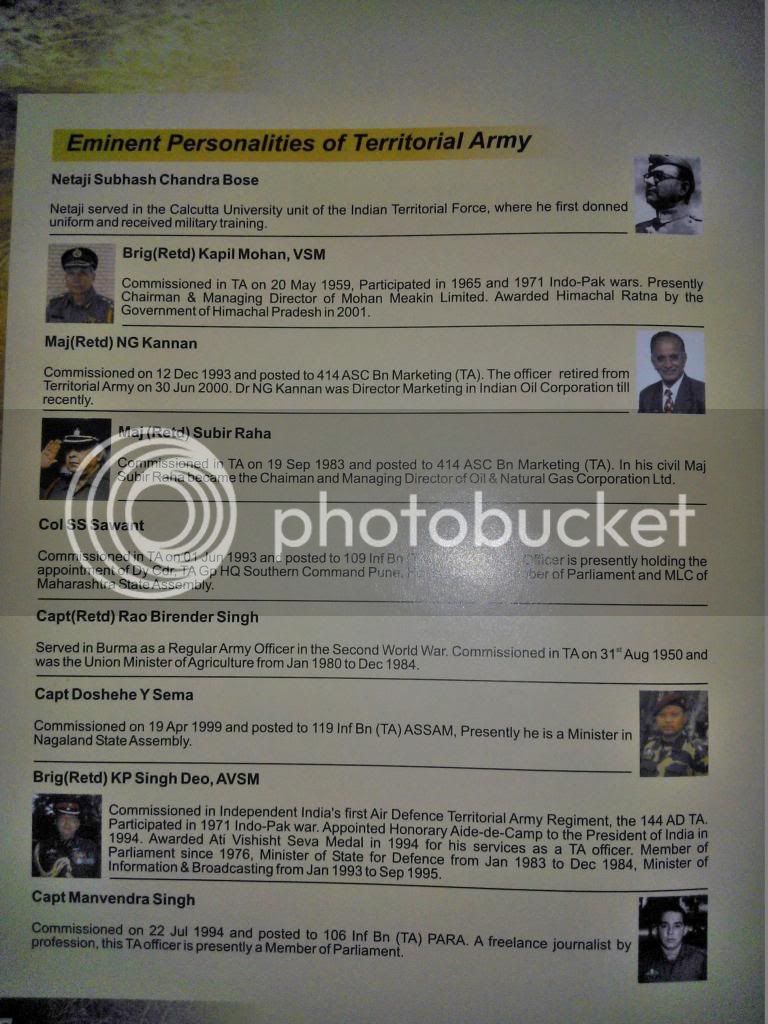 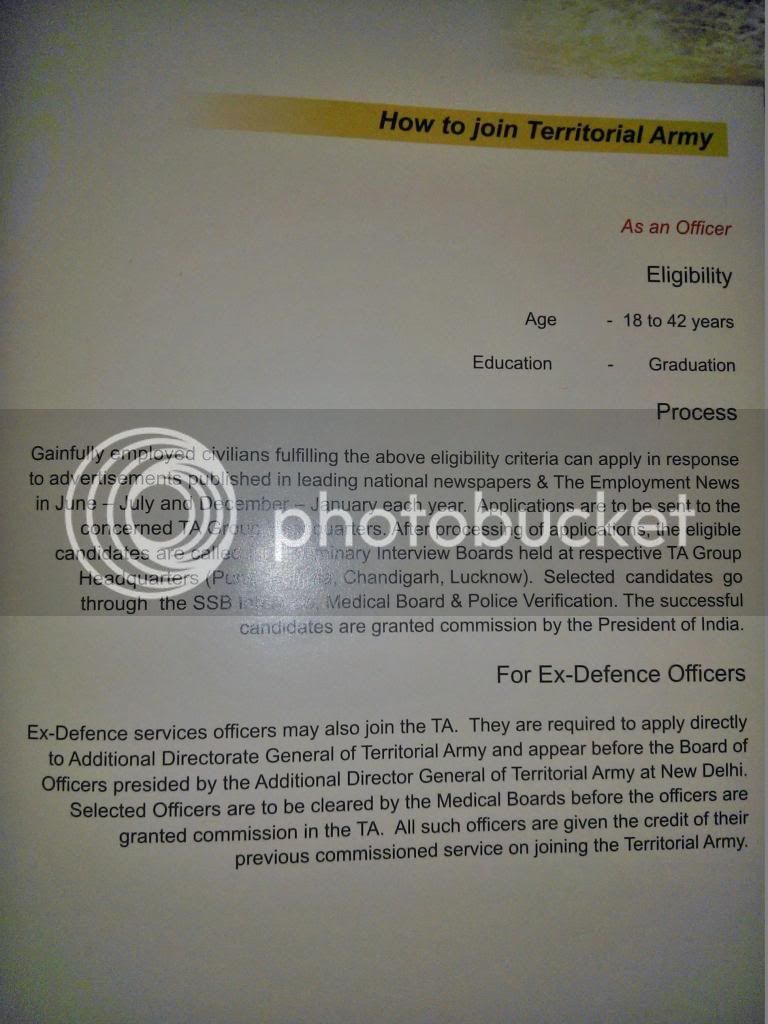 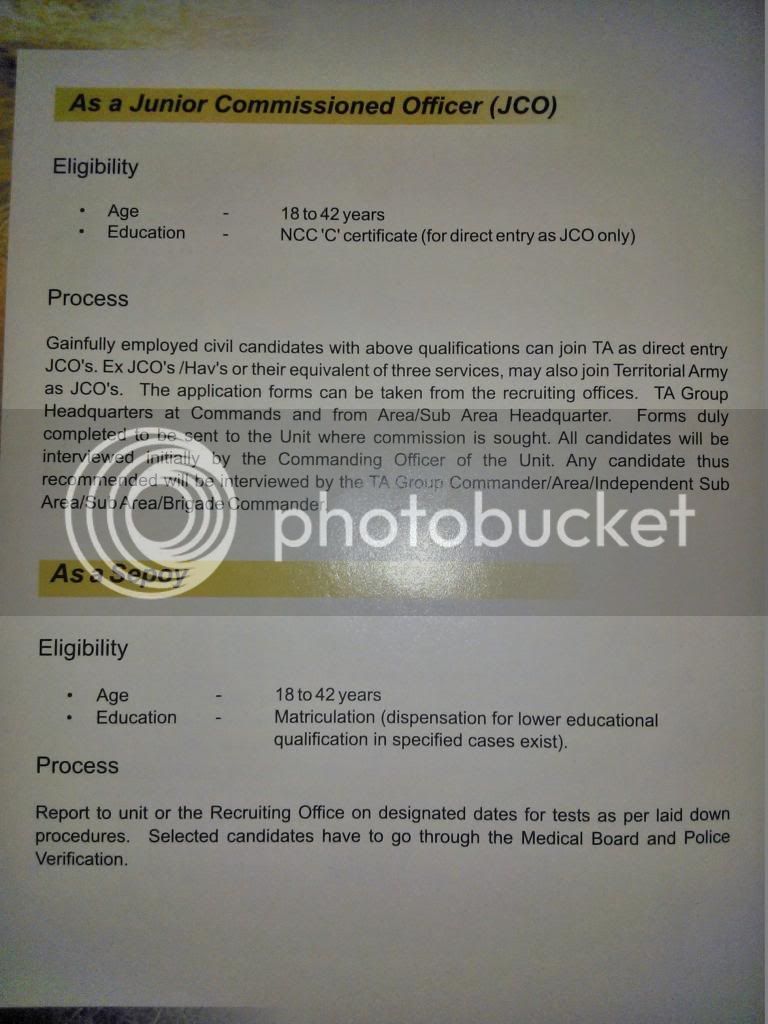 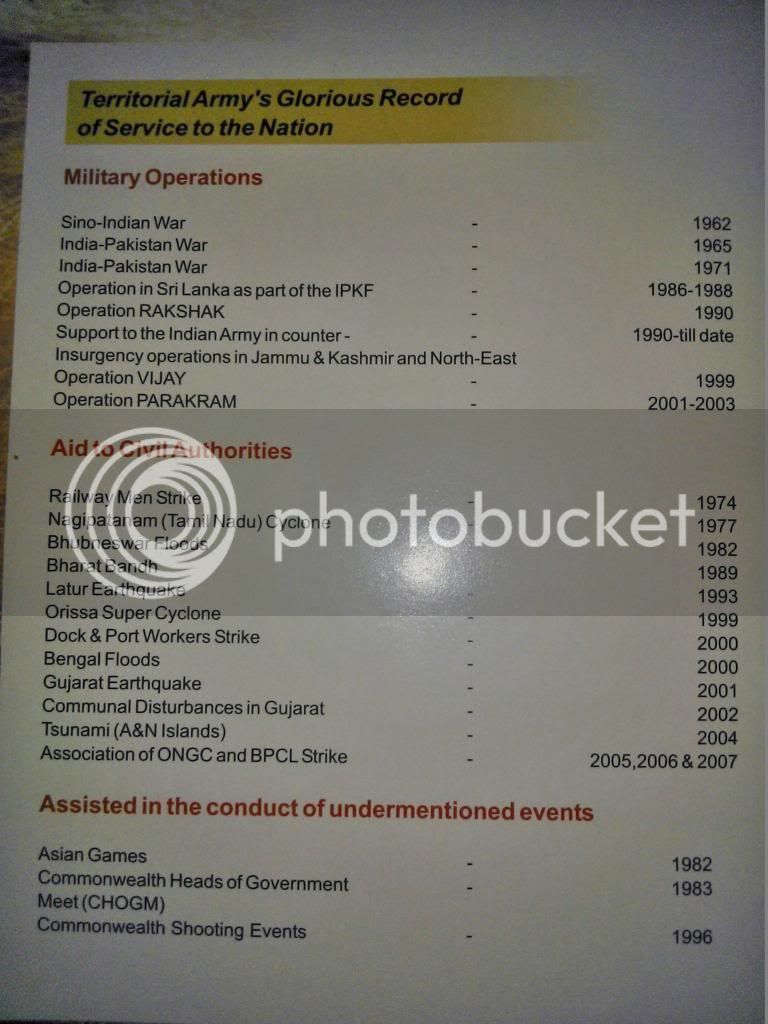 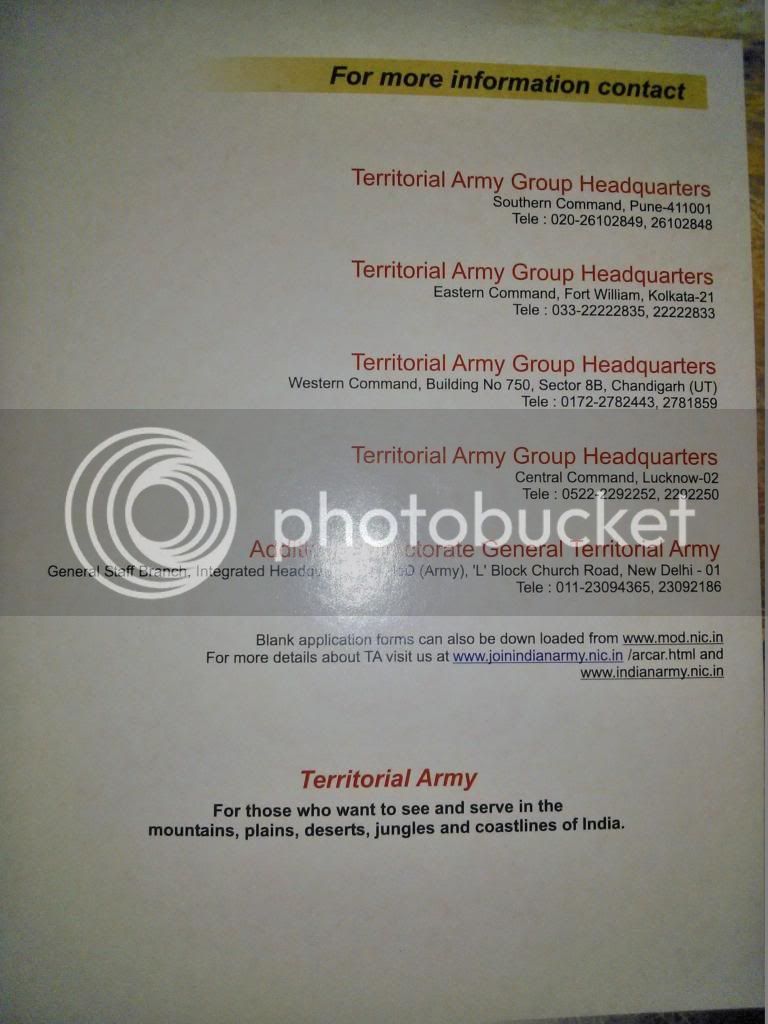 Uploading so those don't know may know .. :cool2:

What does the 106th Infantry Battalion do? I mean is it a part of the SF and how does it work?
K

An Army officer, a civilian and three United Liberation Front of Asom (Independent) cadres were killed in an encounter that took place near Lapa village under Tizit sub-division of Mon district late Tuesday evening, official sources said. Three army jawans were also injured in the encounter.

The deceased army officer was identified as Major David Manlun of the 2nd Naga Battalion attached to 164 Territorial (H&H) Army Battalion. The ULFA (I) cadres were identified as Bhonenpro (2nd Lieutenant), Bipul Asom (31), Dikam Konwar (26) and the civilian, reportedly an auto driver was identified Rajendra Gupta (50).

Sources said that at around 10.40 p.m. Tuesday night, based on a tip-off, a combined team of 164 TA, 12 Para commandos and 35 Assam Rifles trailed the fully armed ULFA cadres who were reportedly travelling in two autorickshaws. The encounter broke out as soon as the joint team came across the militants. In the ensuing encounter, Major David Manlun of 164 TA was martyred and three jawans of the 12 para commandos sustained injuries. Three ULFA (I) cadres were also killed during the encounter including the autodriver while the other militants reportedly fled from the scene in the other autorickshaw, sources said.

The injured army personnel were airlifted to Military Hospital, Jorhat.

Police sources, however, said that they are yet to confirm the link between the auto driver and the ultras.
One AK 47 rifle, two M-69 rifle, nine magazines, 271 rounds of 7.62 mm, six rounds of 5.56 mm, two Chinese make grenades, one knife, four mobile handsets and other personal belongings, including medicines and food items were recovered during the search operation after the encounter. Army sources said that the militants had sneaked in from Myanmar into Mon district to carry out attacks against army personnel. A major search operation has been launched to nab fleeing militants, army officials said.

Meanwhile, the body of Major David Manlum was flown to Shillong for the last rites.

PRO IGAR (N) claimed that the cadres belonged to a joint group of NSCN (K) and ULFA (I). After receiving inputs, PRO said security forces launched an operation and were in the process of establishing a mobile check post when the armed terrorists travelling in an autorickshaw sped past. On being pursued the militants opened fire on the security forces, PRO added.

Damn..this is just too good to be true.. thanks @Kunal Biswas
You must log in or register to reply here.
Similar threads
What is Territorial Army India?
Chinese PLA stops Army from patrolling in Indian territory
Benefits of Joining Territorial Army ?
An Air Force in line with the Territorial Army?
Share:
Facebook Twitter Reddit WhatsApp Link