Taiwan's defence ministry has said China's military strength is more than it needs
for self-defence and it is a threat to the Asia-Pacific region. 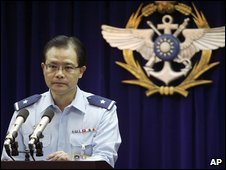 It warned unless 1,500 missiles aimed at Taiwan were removed, both nations would find it hard to trust each other.

China, which regards Taiwan as part of its territory, has not yet responded to the Taiwanese defence report.

China has claimed sovereignty over Taiwan since the end of the Chinese civil war in 1949, when the defeated Nationalist government fled to the island as the Communists, under Mao Zedong, swept to power.

The documents say that China had "continued its arms build-up to the point that it has tipped the military balance in the Taiwan Strait", the AFP news agency reported.

The Taiwan News said the ministry wanted better communication with China and that "psychological warfare" was also a concern.

but I just feel it very strange why such a stereotyped phrase becomes a piece of "news" here?
R


It warned unless 1,500 missiles aimed at Taiwan were removed, both nations would find it hard to trust each other.
Click to expand...

That is stupid, Mainland has missiles can hit anywhere in the world, Taiwan is within range anyway.


by Staff Writers
Taipei (AFP) Oct 19, 2009
China now has about 1,500 missiles pointed at Taiwan, with no signs that the build-up is about to stop anytime soon, a spokesman for the island's government said Monday.

"The number of missiles has been rising. We don't know when it will stop increasing," said the spokesman.

He was speaking ahead of the release Tuesday of the ministry's annual report, which will include an updated estimate of China's military capabilities.

In its National Defence Report for 2008, the Taiwan government estimated that China had deployed 1,300 missiles in the area near the island.

China and Taiwan have been governed separately since the end of a civil war in 1949, but Beijing considers the island part of its territory and has vowed to take it back, by force if necessary.

Relations have improved dramatically since the China-friendly President Ma Ying-jeou took office in Taiwan a year ago.

The two sides have held three rounds of negotiations that resulted in regular direct flights, an easing of investment restrictions and a boost in tourism.

However, the missiles remain a major obstacle to improved relations, Ma has said repeatedly.

"I have said many times in the past, before and after my inauguration, that if we are to negotiate a peace agreement with the mainland including military confidence-building measures, they should remove or dismantle the more than 1,000 missiles targeting Taiwan," Ma said in May.

redragon said:
That is stupid, Mainland has missiles can hit anywhere in the world, Taiwan is within range anyway.
Click to expand...

US will give nuke to TAIWAN to make sure China is destroyed along with Taiwan, there is no way that China will get an edge over Taiwan after it has been under USA's security umbrella for 5 decades, and China would be booted out of the P5 and UNSC just to start.

The Pentagon admitted yesterday that it had mistakenly shipped four triggers for inter-continental nuclear missiles to Taiwan, an island with which Communist China maintains a state of war.

Officials said that the components had since been returned to the United States but added that they had began a full investigation into the incident which occurred two years ago.

The blunder represents the second embarrassing misplacement of nuclear-related equipment to come to light in recent months. Last year the military lost track of nuclear warheads for several hours after an Air Force bomber was incorrectly armed with them — and then flew over the length of the US before the error was discovered.

Ryan Henry, a senior adviser to Robert Gates, the Defence Secretary, said that the military was supposed to dispatch helicopter batteries to Taiwan. “It was not crystal clear exactly what happened,” he said, before describing the mistake as disconcerting and intolerable.


The Pentagon has ordered the Navy and Air Force to make an inventory of all nuclear and nuclear-associated equipment. An examination of the site in Taiwan where the components had been stored indicated that they had not been tampered with. Mr Henry said that the triggers were “quite dated” as part of the Minuteman strategic nuclear missile system designed in the 1960s.

Michael Wynne, the Air Force Secretary, insisted that the items “could not be construed as being nuclear material”. He added: “It is a component for the fuse in the nosecone for a nuclear system.” But he added: “We are very concerned about it.”

Chinese officials, who have been informed of the incident, did not immediately respond to requests for a comment. Taiwan broke away from the mainland in 1949. Although Washington no longer formally recognises the island’s independence, it continues to provide the bedrock of Taiwan’s military defence against a possible Chinese attack.
R

Lethalforce,
I agree 100% that US will fight till death for Taiwan or it will provide Taiwan N-bomb to make sure Mainland and Taiwan go to the bottom of ocean hand in hand. That further solidate my statement about the stupidity of the comment from Taiwan.
K

Did you know that the US forced Taiwan to halt their nuclear program back in the day?

"By 1974 the US Central Intelligence Agency concluded that "Taipei conducts its small nuclear programwith a weapon option clearly in mind, and it will be in a position to fabricate a nuclear device after five years or so."

Chiang Kai-shek died in 1975, and the presidency was assumed by his son, Chiang Ching-kuo.

In September 1976 President Chiang Ching-kuo stated that Taiwan would not develop reprocessing facilities or engage in reprocessing. Despite this pledge, Taiwan appears to have continued modest clandestine reprocessing and irradiation research through the late 1980s. The United States forced Taiwan to dismantle some facilities to reduce the risk they posed."

Taipei: Taiwan is developing a potent missile system that can strike airfields and harbours on the mainland, in a bid to nip a Chinese invasion in the bud, local media said Tuesday.

Each missile carries more than 100 cluster bomb warheads capable of blowing dozens of small craters in airport runways, making them impossible to use, the magazine said.

The missile is also designed to target harbours, missile and radar bases, as well as troop build-up areas prior to an invasion of the island, the magazine said.

The defence ministry is planning to invest 15 billion Taiwan dollars in 2011 and 2012 to equip its Indigenous Defence Fighters (IDFs) with the new system, it said.

The system could go into mass production after it is integrated with the IDF jets to reduce the risks of having to send Taiwanese jets to the mainland, as it can aim at Chinese targets from a distance, it added.

Military pundit Lin Yu-fang, a lawmaker of the ruling Kuomintang (KMT) party, told AFP that there had been "some progress" in the "Wan Chien" project but he declined to elaborate.

Taiwanese experts estimate the People's Liberation Army currently has more than 1,600 missiles aimed at the island.

Ties between Taiwan and its giant neighbour have improved markedly since the Beijing-friendly KMT took office in Taipei in 2008.

But China still considers the island part of its territory awaiting reunification, by force if necessary, prompting Taipei to seek more advanced defence weaponry mainly from the United States.

Washington announced in January a weapons package for Taiwan that includes Patriot missiles, Black Hawk helicopters, and equipment for Taiwan's F-16 fighter jets, but no submarines or new fighter aircraft.