The sleek black-and-white vessel represents a gamble with a sky-high price tag to create a commercial space and tourism industry.

The company hopes the winged, minivan-sized SpaceShipTwo, will rocket space tourists into zero gravity within just two or three years. 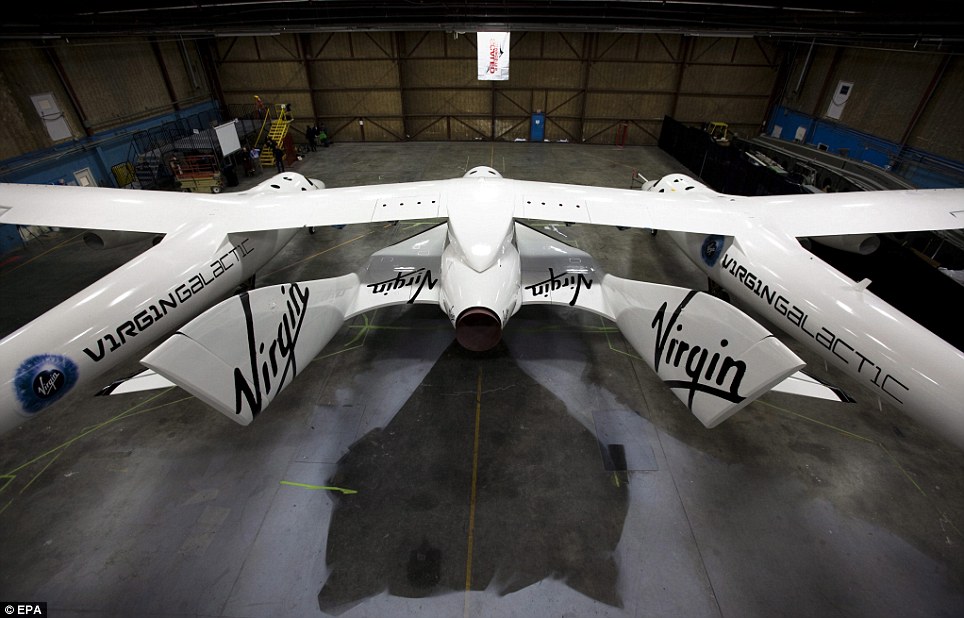 Dawn of a new era: The SpaceShipTwo is unveiled at a hangar in California's Mojave Desert. It is expected to carry passengers into space within three years

Ready for launch: The white port-holed craft is suspended under the wings of the mothership called White Knight Two​
'This will be the start of commercial space travel,' Virgin founder and billionaire Sir Richard Branson said at the launch in California's Mojave Desert.

'You become an astronaut.'

The $450million (£274million) project would see a fleet of six commercial spaceships rocket passengers to the edge of space.

They would be high enough to experience weightlessness and see the curvature of Earth set against the backdrop of space. 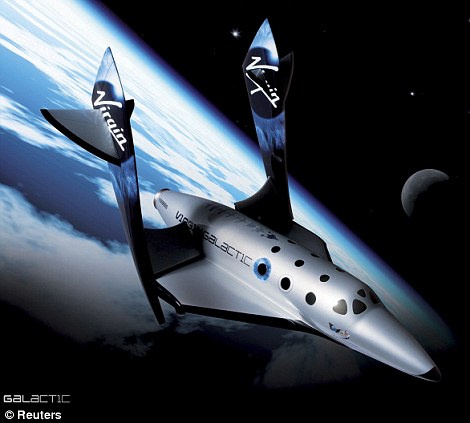 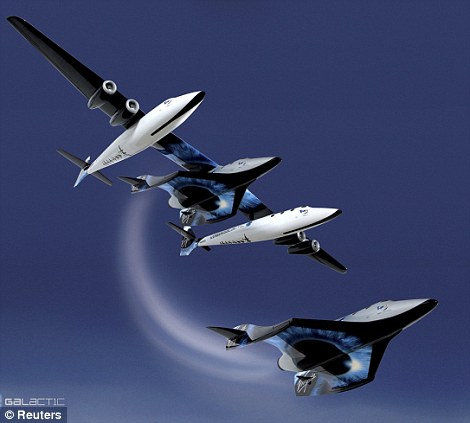 Space for the masses? An artist's conception of Virgin Galactic's SpaceShipTwo during a sub-orbital flight (left) and the space ship as it is released from its mothership White Knight Two (right)​
A twin-hulled aircraft named Eve would carry SpaceShipTwo to an altitude of about 60,000 feet (18,288m) before releasing it.

The spaceship would then fire its onboard rocket engines, which would thrust it to about 65 miles (104 km) above Earth.

The trip would take only two and a half hours and give passengers about five minutes of weightlessness.

Virgin Galactic, the offshoot of Virgin Atlantic that is marketing space travel, hopes to eventually cut the ticket price to be competitive with that of air travel between the United States and Australia.

Powerful: SpaceShipTwo is carried by a twin-hulled aircraft named Eve, which will carry it to an altitude of about 60,000 feet before releasing it​
The unit is also considering providing suborbital travel between destinations to cut the journey time between the United States and Australia to about 90 minutes from about 15 hours or more.

Other potential business ventures include flying scientists and research experiments and using the carrier aircraft to launch small payloads into space.

Commercial space flight has been a dream for decades. But the 2004 flight was the first proof that industry might be able to achieve it without the help of government, which historically has dominated space travel. 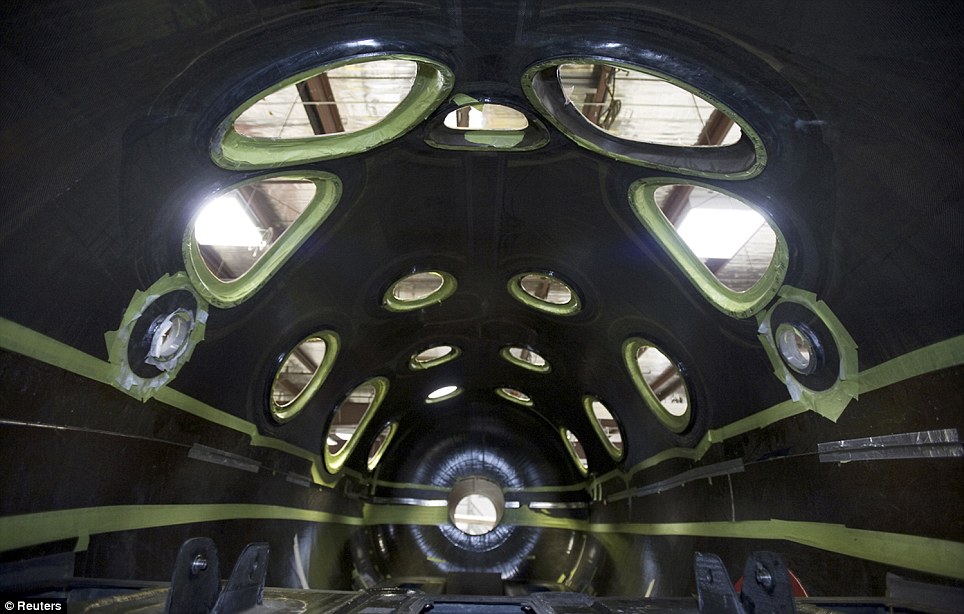 Inside deal: An interior view of SpaceShipTwo's cabin is shown under construction at the Scaled Composites facility in Mojave, California​
A lethal 2007 explosion during a rocket engine test by Scaled Composites, however, illustrated the danger and risk to creating a safe and profitable venture.

'If you ask a group of people if there's a market for this, they say, "Oh, the answer is obvious,'" said John Olds, the founder and chief executive of SpaceWorks Engineering who is leading a study group on suborbital point-to-point travel.

'Half say "Of course there's a market." The other half says "Of course not.'"

SpaceShipOne, which is on display at the National Air & Space Museum in Washington, made three suborbital flights.

'It's been a tough five years, but we are finally there,' Branson said. 'Hopefully over the next decades, tens of thousands - if not hundreds of thousands - of people will have the chance to go to space.'

Sleek: A side view of the body of SS2. Approximately 600 people are currently involved in preparing the craft for its first commercial flight​
A 10-month atmospheric test flight program is expected to begin on Tuesday and would be followed by extensive test flights into space before passenger travel is scheduled to begin in 2011 or 2012.

Approximately 600 people are now employed on activities relating to the Virgin Galactic project. This figure is estimated to rise to over 1,100 jobs during the peak of the construction phase at the space port and when the commercial space vehicles begin their flights.

Sir Richard Branson said: 'The team has created not only a world first but also a work of art. The unveil of SS2 takes the Virgin Galactic vision to the next level and continues to provide tangible evidence that this ambitious project is not only moving rapidly, but also making tremendous progress towards our goal of safe commercial operation.

'It's incredible to think only 450 people have ever been into space; that's including all the Russians, all the Chinese and all the Americans put together,' he added. 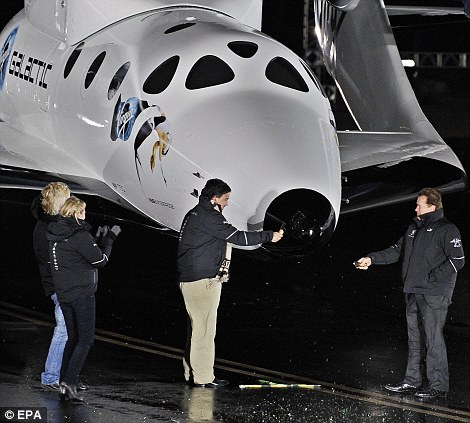 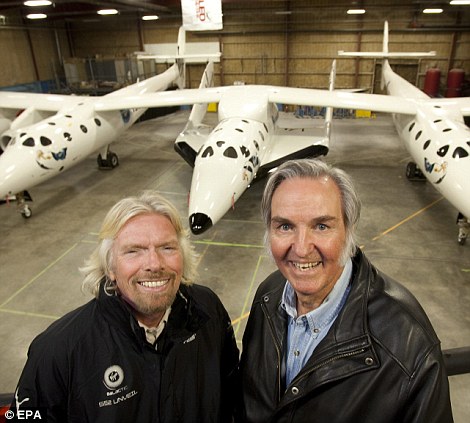 LAS CRUCES, N.M. -- With Spaceport America under construction, the dream of commercial spaceflight is quickly becoming a reality, and Monday proved that even more with the unveiling of the ship that will be flying out of southern New Mexico.

“I think it's very modern looking, I like the way that it looks. It kind of remind me a bit of Star Trek,” said Nancy Cambell of South Las Cruces.

But it's not Star Trek, and it's not science fiction. It's reality, and Monday, Richard Branson of Virgin Galactic unveiled the spacecraft known as SpaceShip Two (SS2), the world’s first ever manned commercial space ship. Of course, Branson being the one behind making the dream a reality will be the first to make the trip into space.

“I will be the first to go into space. I will be bringing my children, Holly and Sam, and my parents Ted and Sam. So, I'm obviously a believer,” said Branson.

“No, no, we are definitely not going to be buying a ticket, I can assure you of that,” said Cambell.

The SS2 is expected to be flying out of New Mexico sometime in 2011 when Spaceport America if finished.