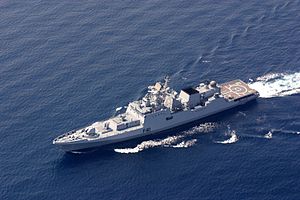 Equipped with BrahMos supersonic cruise missiles, INS Teg, a Russian-built frigate for the Indian Navy, will set sail once its Indian crew arrives and takes over the warship from the Russian Navy, well-informed sources said here Friday.

INS Teg is the first of six Talwar (Krivak) class frigates to be equipped with the 290-km BrahMos missiles jointly developed by India and Russia. The first three Talwar class warships -- INS Talwar, INS Trishul and INS Tabar -- that were inducted in the Indian Navy in 2002 and 2003 do not have the BrahMos, but are equipped with Klub class missiles.

Apart from INS Teg, two other frigates, being built by the Kaliningrad-based Yantar shipyard -- all three constituting the second line of Talwar-class ships -- will also have the BrahMos missiles integrated.

"With the successful test of BrahMos, INS Teg is now ready to sail to India. It is awaiting its Indian Navy crew, who are expected later this month or early in January 2012," sources here told IANS.

"The Indian Navy plans to induct the warship by March 2012," they added.

The Russian Navy, which had conducted the sea trials of INS Teg in September, test-fired the BrahMos from the ship's bow in the first week of December. Telemetric data indicated that all of its systems performed optimally, the sources said.
India and Russia had in July 2007 signed a $1.6 billion contract for the three follow-on Talwar class frigates under the Indian Navy's Project 11356.

INS Teg and the other two warships -- INS Tarkash (delivery likely in July 2012) and INS Trikand (January 2013) are expected to bolster the Indian Navy's growing blue water capabilities and ambitions.

The Indian Navy giving top priority to these guided missile frigates to maintain its combat worthiness and organizational ability to deploy warships at immediate notice.
The previous vessels of the Talwar class have been deployed by Indian Navy in anti-piracy operations in the Gulf of Aden and have proved themselves worthy of being mean fighting machines by achieving "kills" of pirate mother ships.

Packed with sensors, weapons and missile systems and stealth due to highly-reduced radar, infra-red, noise, frequency and magnetic signatures to beat enemy detection, each of these warships is equipped with a 100-mm gun, a Shtil air defence system, two Kashtan air defence gun and missile systems, two twin 533-mm torpedo tubes, and an anti-submarine warfare helicopter.

BrahMos Aerospace is an India-Russia joint venture established in 1998 for the joint development of the eponymously-named supersonic cruise missiles. The missiles, said to be the fastest in their class, are now under production and have been successfully inducted into the Indian Army and Indian Navy. The two countries are also developing the air-launched version of the missile that can cruise at speed of Mach 3, or three times the speed of sound, for the Indian Air Force's Sukhoi S-30 MKI air superiority combat planes.

A hypersonic version of BrahMos with Mach 7 speeds to boost aerial strike capability is under development and is expected to be ready by 2016.

then that's a wrong posting... because this is a navy development.

i dont know... i didnt posted it. talk to mods. and admin