' Platinum-II-Toxic' US ship banned in India

India has blocked entry to a former US naval ship heading for break-up at a scrap yard on its west coast, citing environmental and pollution concerns.The ministry of environment and forests said it inspected Platinum-II and found the ship contained toxic material. There are also concerns that the ship has been brought into India with false documentation, the ministry says. The ship reached Indian waters last month, but was not allowed to dock until an investigation was completed.

A team inspected the ship on October 19 and 20 and submitted its report to the ministry on 26 October. "The ship violated the US Toxic Substances Control Act... There have also been allegations that the ship has been brought into India with a falsified flag and registry," a note from the ministry of environment to the Gujarat Maritime Board said. "The ministry of environment and forests is of the view that granting permission for beaching and breaking purposes of the ship will not be advisable," it adds. There has been no comment as yet from the private owners of Platinum-II.

The Platinum-II - formerly known as SS Oceanic or the SS Independence - was destined for the Alang ship-breaking yard. The Gujarat Maritime Board leases out the yard to ship-breakers.

It is Asia's largest ship-breaking yard and known as the "graveyard of ships". Thousands of ships from around the world come to this section of Gujarat state's coastline to be dismantled.

Workers manually take apart huge liners, past their prime, with very basic tools. Campaigners have been demanding the closure of the ship-breaking yards for many years now - they say the work adversely affects the health of the workers. The decision to prohibit the from docking has been welcomed by campaigners. 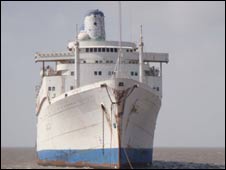 "The order is a victory in the fight against toxic trafficking and dumping on third world countries," said Jim Puckett, executive director of the Basel Action Network, a member organisation of the coalition group, Indian Platform on Shipbreaking. "Until now, India has been reluctant to expose the horrors of its ship-breaking industry. Hopefully they are beginning to realise that this industry is not worth the legacy of toxic waste, occupational disease and death, and illegality it leaves in its wake."


Asbestos poisoning
There have long been environmental concerns surrounding the Alang ship-breaking yard. In 2006, the French government recalled the decommissioned aircraft carrier Clemenceau after a lengthy campaign by Greenpeace and other environmental groups who said the ship contained huge amounts of toxic chemicals, including asbestos.

A report commissioned by the Indian government three years ago showed that one in six workers at the Alang shipyard showed signs of asbestos poisoning. It said many of the workers tested showed early signs of asbestosis - an incurable disease of the lungs. Activists say the yards are not equipped to handle asbestos