President Vladimir Putin’s spokesman says plans for a new submarine-launched nuclear torpedo shown on Kremlin-controlled television were secret and should never have been aired.
The video broadcast on NTV and Channel One — shot over a military officer’s shoulder during a meeting with Putin — showed a document describing a weapons system called Status-6, which it said would cause radioactive contamination to make coastal areas unsuitable for military or economic activity “for a long time.”

The channels later removed the footage.
Putin spokesman Dmitry Peskov said late Wednesday: “It’s true that some secret information was caught by the camera and therefore it was subsequently removed. We hope this will not happen again.”
The appearance of the video on Kremlin-controlled channels raised suspicions it was done intentionally to alarm the West

Did Russia Just ‘Gently’ Threaten the US?
US likes to talk loudly and hystericaly. Russia bars its teeth makes it’s points more subtly 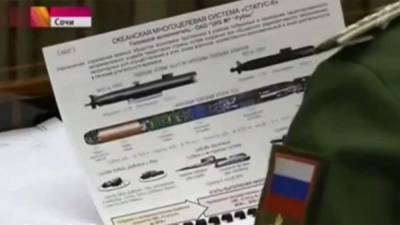 Originally appeared at The Vineyard of the Saker

Interesting stuff today. A major Russian TV channel just aired a report about Putin meeting with his top military commanders. I don’t have the time to translate what Putin said word for word, but basically he said that the USA had refused every single Russian offer to negotiate about the US anti-missile system in Europe and that while the US had initially promised that the real target of this system was Iran, now that the Iranian nuclear issue had been solved, the US was still deploying the system. Putin added that the US was clearly attempting to change the world’s military balance. And then the Russian footage showed this: 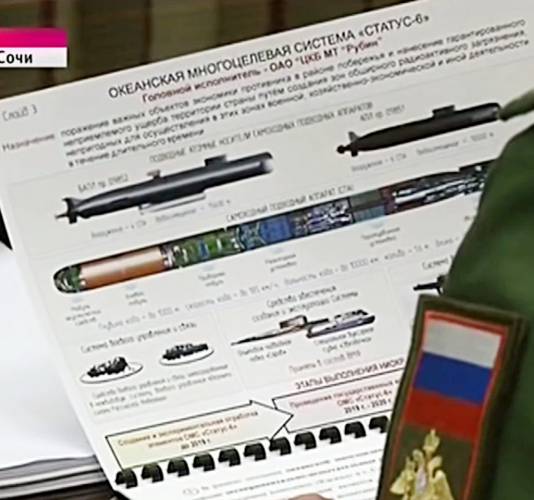 According to the Kremlin was mistakenly leaked secret document. And just to make sure that everybody got it, RT wrote a full article in English about this in an article entitled “[URL='https://www.rt.com/news/321640-leaked-russian-nuclear-torpedo/']‘Assured unacceptable damage’: Russian TV accidentally leaks secret ‘nuclear torpedo’ design,”[/URL] According to RT

The footnote to the slide stated that Status-6 is intended to cause “assured unacceptable damage” to an adversary force. Its detonation “in the area of the enemy coast” would result in “extensive zones of radioactive contamination” that would ensure that the region would not be used for “military, economic, business or other activity” for a “long time.”

According to the blurred information provided in the slide, the system represents a massive torpedo, designated as “self-propelled underwater vehicle,” with a range of up to 10 thousand kilometers and capable of operating at a depth of up to 1,000 meters.​
Actually, such ideas are nothing new. The late Andrei Sakharov had already proposed a similar idea to basically wipe out the entire US East Coast.

The Russians have also look into the possibility to detonate a nuclear device to set off the “Yellowstone Caldera” and basically destroy most of the USA in one shot.

While in the early years following WWII the Soviets did look into all sort of schemes to threaten the USA with destruction, the subsequent development of Soviet nuclear capabilities made the development of this type of “doomsday weapons” useless

Personally, I don’t believe for one second that the Russians are now serious about developing such system as it would be literally a waste of resources. So what is going on here?

This so-called “leak” of “secret documents” is, of course, no leak at all. This is a completely deliberate action. To imagine that a Russian journalist could, just by mistake, film a secret document (helpfully held up for him by a general) and then just walk away, get it passed his editor and air it is laughable.

Any footage taken in a meeting of the President with his senior generals would be checked many times over.

No, this was a deliberate way to remind the USA that if they really are hell-bent on spending billions of dollars in a futile quest to create some kind of anti-missile system Russia could easily develop a cheap weapon system to still threaten the USA with total annihilation.

Because, make no mistake, the kind of long range torpedo being suggested here would be rather cheap to build using only already existing technologies.

I would even add that rather than setting such a weapon off the US coast the system could also be designed to fire off a secondary missile (ballistic or cruise) which could then fly to any inland target. Again, such technologies already exist in the Russian military and have even been deployed on a smaller scale. See for yourself:


Coming back to the real world, I don’t believe for one second that any type of anti-missile system could be deployed in Europe to shield NATO the EU or the US from a Russian retaliatory strike should the Empire ever decide to attack Russia.

All the East Europeans are doing is painting a cross-hair on themselves as these will be the very first targets to be destroyed in case of a crisis. How? By use of special forces first and, if needed, by Iskander missile strikes if all else fails.

But the most likely scenario is that key components of the anti-missile system will suddenly experience “inexplicable failures” which will render the entire system useless. The Russians know that and so do the Americans.

But just to make sure that everybody got the message the Russians have now shown that even a fully functional and survivable US anti-missile system will not protect anybody from a Russian retaliation.

The sad thing is that US analysts all fully understand that but they have no say in a fantastically corrupt Pentagon. The real purpose of the US program is not to protect anybody against a non-existing Russian threat, but to dole out billions of dollars to US corporations and their shareholders. And if in the process the US destabilizes the entire planet and threatens the Russians – then “to hell with ‘em Russikes! We are the indispensable nation and f**k the rest of the planet!” Right?

What happened today is a gentle reminder of that.

Yeah right, the same tactical nuclear BS, i thought Russia was smarter than that. Assured unacceptable damage will escalate to Assured Mutual destruction.

Firstly stop calling this a torpedo it's a 10000km range underwater ICBM.
Secondly this leak was planned.
Thirdly, Russia just told the U.S the entire western seaboard and Hawaii was at risk.

Fourthly and most importantly I believe we'll soon see the DPRK get some serious military upgrades look out for transfer of older SU-27,T-80 and BMP 3 type assets. that would really put the Americans on edge in the Korean peninsula while also serving Chinese goals in the region.

This is not tactical it's strategic, hitting the San Andreas fault with a submarine thermonuke will break the continental U.S apart.

bengalraider said:
Firstly stop calling this a torpedo it's a 10000km range underwater ICBM.
Secondly this leak was planned.
Thirdly, Russia just told the U.S the entire western seaboard and Hawaii was at risk.

Fourthly and most importantly I believe we'll soon see the DPRK get some serious military upgrades look out for transfer of older SU-27,T-80 and BMP 3 type assets. that would really put the Americans on edge in the Korean peninsula while also serving Chinese goals in the region.
Click to expand...

Firstly, pretty sure both ballistc and missile refer to a projectile that travels through the air. But, more importantly, why do you imagine its range is going to be 10.000km? A torpedo travels... 100kmph? Where's this torpedo going to be carrying its 4 days worth of fuel? Having a nuclear warhead, doesn't mean nuclear powered.

It was planned... maybe.

Thirdly, all of the west has been threatened with Russia nuclear destruction for the last ~60 years. What's changed?

Fourthly, why do think that (/proof) ?


bengalraider said:
This is not tactical it's strategic, hitting the San Andreas fault with a submarine thermonuke will break the continental U.S apart.
Click to expand...

You've got a pretty vivid imagination ;-)

@apple - though I am quite s fan of tom Clancy " red storm rising" my favorite. The post above is based on facts reported in the press. Read on below.

The specs on the slide seem a little optimistic, but they suggest that once roaming wild, the underwater drone could travel a total distance of 10,000 kilometers, or 5,400 nautical miles. It would be designed in such a way that it could be navigated undetected into a U.S. port where it could then detonate its “combat payload” — a thermonuclear weapon. The system would never come up for air or encounter any pesky American missile defenses.
Click to expand...

Both range and payload are clearly mentioned.
http://foreignpolicy.com/2015/11/12/putins-doomsday-machine-nuclear-weapon-us-russia/
B

Status-6 Project: What Is Really Known