Lieutenant General Naseer Khan Janjua, who retired from the military this week, will be appointed national security advisor soon and will accompany Prime Minister Nawaz Sharif on his trip to the United States next week, one military official and two civilians said.

The post is currently held by Sartaj Aziz, a civilian who is a close ally of Sharif. Aziz also holds the portfolio for foreign affairs.

"The army chief feels that Sartaj Sahib's attention is divided," a military source said. "So it has been decided that General Janjua will be appointed the national security adviser and Sartaj Aziz can give his full attention to the foreign office."

"This is not about the PM conceding to the army chief or the army being a bully, not at all. This is about both sides deciding together."

Sharif has had rocky relations with Pakistan's powerful military, who deposed him in a 1999 coup during a previous term as prime minister.

He swept into office again in 2013 vowing to improve relations between Pakistan and India, two nuclear-armed rivals who have fought three wars since becoming separate nations in 1947.

But many in the military remain deeply suspicious of India, and Sharif has had to reign in his ambitions. Domestic political protests last year forced him to rely more heavily on the military for stability, and India elected hawkish nationalist Narendra Modi as prime minister.

"The army had advised the PM against engaging Modi but he (Sharif) had insisted that he would pursue peace talks,” the official said. "He is very disappointed by Modi's response and he has realized that perhaps the advice he got then was correct."

A senior minister in Sharif's cabinet said the army chief had pushed Janjua's appointment "for many months," although Nawaz had preferred to keep his own man, Aziz.

“Now the army chief has convinced the prime minister that the military and the government must ... work together,” the minister said.

Janjua's appointment follows cooling relations between Pakistan and India, who were due to hold talks in August but canceled after India said it wanted to limit the scope of the talks to Pakistan’s support for militancy on Indian territory and Pakistan insisted on more wide-ranging discussions.

"General Janjua will go to Afghanistan for talks. He will go to the U.S. And yes, when Pakistan-India (national security advisor) level talks resume, it will be General Janjua at the table," the military official said.

Two senior government officials said that Janjua was respected for his previous posting in Baluchistan, a poverty-stricken province with a raging separatist insurgency and widespread reports of human rights abuses by security forces.

Before that, Janjua was president of the National Defense University, the military's higher education institute and premier think-tank on national security matters.

He also worked on 'Azm-e-Nau,’ a military preparedness exercise that had a particular focus on India.

One more open loop closed from a baki point of view.

This also means an attempt to balance the Ajit doval equation.

Is he too from Pakjab like COAS ?
What sect?

Hilarious attempt to come to come to Doval's level.. Anyways they feel now their security policy needs to be more aggressive.. Let them take the aggressive way.. this gives us a free license..

Doval makes Pakis soil their pants, so their move is to put an airhead jernail in that post, so it looks "tough" and reassuring to Paki public. It's actually quite good for India if they're choosing "image" over merit.

But of course Indian media whores will do their part in building this guy's "image."

In other words, one by one everything is going under pak army's direct control. 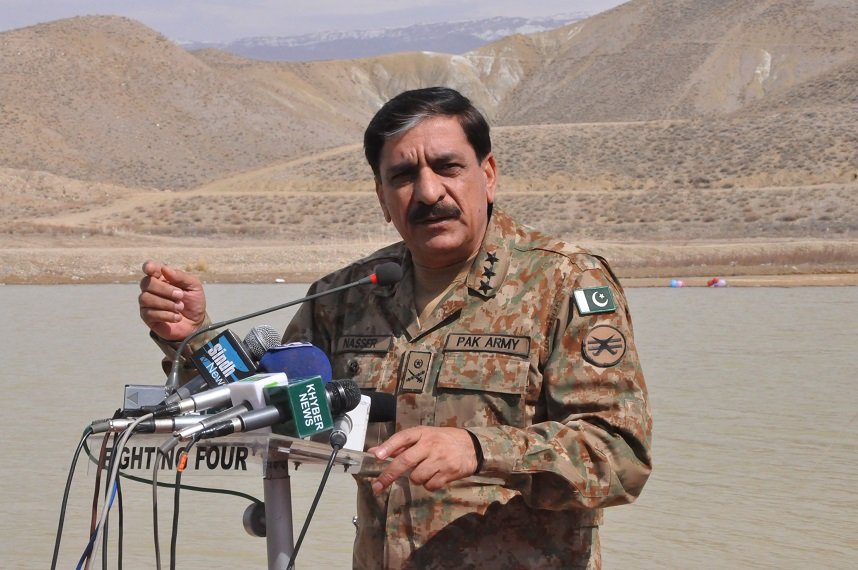 can a hindu convert show loyalty to pakistan.??

Paki Army going to talking about the terrorism ...

Pakistanis have view on everything and that view comes pedestrian level thinking.

I saw some video clip where the converted Rajput lobby was cribbing about Nawaz Sharif that the entire inner circle of Nawaz's government is small club of people of his Kashmiri Biradari (Pakjabi clan claiming Kashmiri origin) and that Rajput lobby feels sidelined. And then this Janjua guy was made NSA and someone issued official threat to Nawaz saying 'RAW may assassinate PM'.

what is going on

Pakistan army has already initiated infiltrating the bureaucracy and diplomacy long ago. after serving in army the officers apply for administrative service or foreign or police service hence the control goes to Army again in all ministries. Because, then the ex army officers will always support military policy and not the politically elected leader.

Good move Pakistan! Should have been done much earlier.

India should enhance it's covert capability to fuc*k coming NSA of Pakistan's image.

Pakistan should reply in same manner, activate sleeping cells in INDIA including the IA and create trouble in NE and other parts as well.

Neo said:
Pakistan should reply in same manner, activate sleeping cells in INDIA including the IA and create trouble in NE and other parts as well.
Click to expand...

Peshawar yaad hai? Don't take panga. .. if your coming NSA is sane then he will not give the green signal to above. Not atleast during Modi's regime