The Pakistani Navy has not yet officially acknowledged the submarine sitting on the quay outside its special forces headquarters. The submarine was first revealed on Forbes in April. Since then further satellite images have emerged. These provide additional clues about the unidentified boat.

On July 3, Rear Admiral M Arshid Javed, Director General Public Relations for the Pakistan Navy, shared a video of a passing out parade. In the video new operatives of the Special Services Group Navy (SSG-N) special forces unit are parading and receiving awards. They are marching in the parade square at PNS Iqbal, the SSG-N’s headquarters and training base. For the first three seconds of the video part of the mystery submarine is visible in the background.

It is covered in tarpaulins but to trained eyes the shape is unmistakable. And it exactly matches the satellite image at the head of this article, which was also taken on July 3. The tarpaulin covering the front of the submarine is a light beige color, and the one over the back is a faded red.

The contours of the tarps may reveal some new details about the submarine. For example we can see the shape created by the forward hydroplanes. Technical details like this will be useful to defense analysts trying to better understand her form and capabilities. But the eye catches another feature hidden beneath the tarps. Running along the top of the hull is a casing which appears to be shaped to cover cylindrical tubes. Logically, this will be for torpedo tubes. These features were not confidently identified at the time of my previous article.

Having two torpedo tubes under the forward casing would match the previous generation of Pakistan Navy submarines used by the SSG-N. Three Cosmos class “X-Craft”, more properly called the Cos.Mo.S MG-110, are in service. These have twin torpedo tubes in almost exactly the same place as the new boat.

In fact the dark sails of two of the Cosmos class “X-Craft” are visible inside a long shed behind the parade. These were built locally in the 1990s to an Italian design. The new boat appears to have been influenced by the Cosmos class but is shorter, around 55 feet long.

The new design likely has the same role as the Cosmos class, which is to act as a transport for SSG-N commandos. It could also perform ISR missions, meaning Intelligence, Surveillance and Reconnaissance. In both these roles the torpedoes wold be for self-defense and targets of opportunity.

The location of the new submarine keeps it away from prying eyes, and so far no photographs have emerged. It is near to where the Pakistani Navy’s regular submarines are moored, and where their newest warship, PNS Yarmook, was inducted on July 13. That too was caught on satellite imagery.

No doubt more details of this new submarine will emerge over time. But currently the Pakistani Navy is keeping the covers on it. 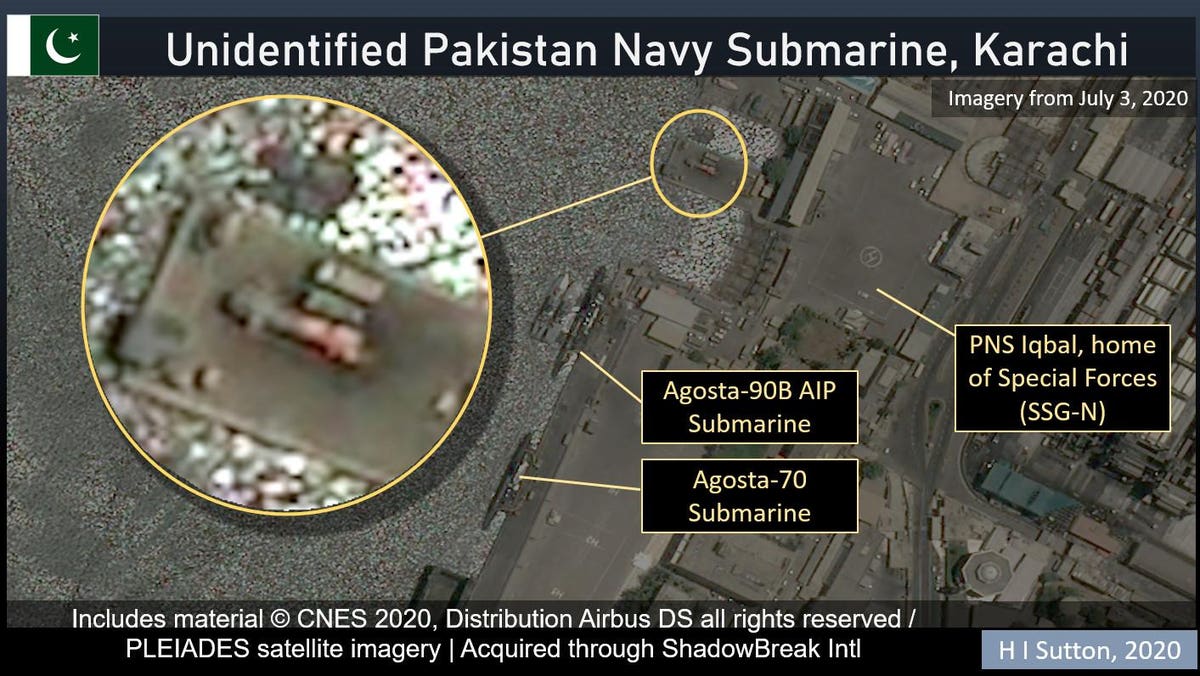 On July 3 the Director General Public Relations for the Pakistani Navy shared a video of a Special Forces parade. In the background was the unmistakable outline of a submarine.

Jimih said:
Here it is