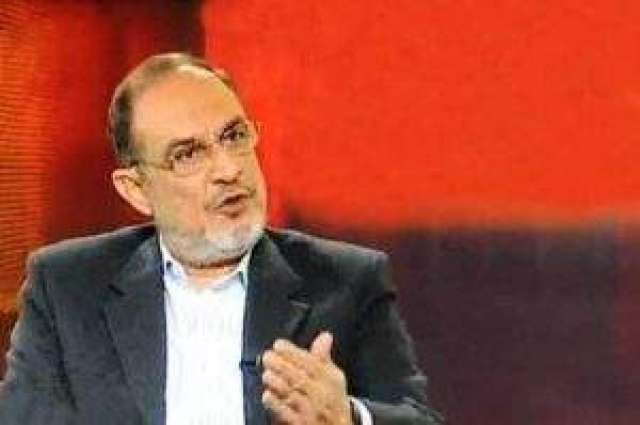 Lt General (r) Shahid Aziz – who also served as the Director General Military Operations (DGMO) and the National Accountability Bureau (NAB) chairman – has been killed in Afghanistan some time ago, a local news outlet citing his family sources reported.

Speaking to a local media outlet, however, Shahid Aziz’s son denied the reports that his father had been killed in Afghanistan.

According to reports, Lt General (r) Shahid Aziz wanted to compensate for what he had done in favour of the US troops, and therefore, he was in Afghanistan wherein he was killed.

Recently in a statement, former army chief General (r) Pervez Musharraf said that Shahid Aziz had grown a beard and gone to Syria, and according to some people, he had been killed there.

Shahid Aziz served in Pakistan army for 37 years and retired in 2005. While being in the army, he remained as the DGMO, the chief of general staff and Lahore corps commander. 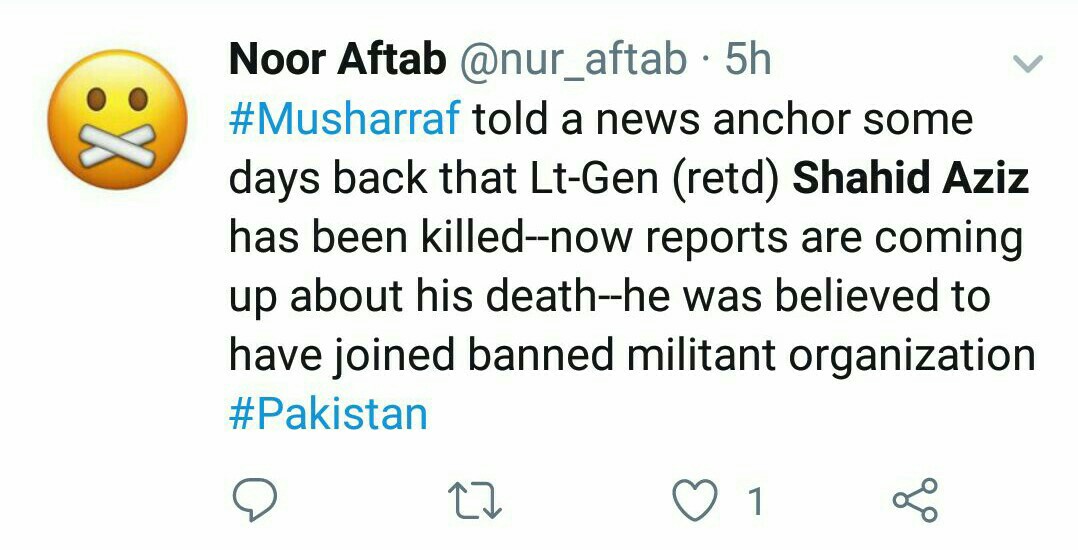 Looks like he was MIA for some time. Now his son says he is alive.

Looks like son on instructions of PA and ISI trying hard to get pakistan out of FATF black listing. Isn't he the same guy who wrote a book on Kargil and Mushy aur PA ko nanga kar diya tha?

Lt. Gen Shahid Aziz Retd), who recently created ripples by acknowledging in an article that regular troops were involved in the Kargil operation, said the "misadventure" was a "four-man show" and details were initially hidden from the rest of the military commanders.

Mush, who served as the Chief during the Kargil War, has refuted Aziz's claims in his book and referred to him as "unbalanced" during an interview when questioned about what had been claimed by Gen Shahid in his book.

But then Mush is famous for lying through his rotten teeth.

what a looser nation is this pakistan . No wonder no medical visa should be given without paying hefty fees for visa .

This was the most ill planned operation by that commando, Mush. However some say that it was tactically brilliant! Bullshit! Let me tell you why.

Firstly, his appreciation that India would not react was way off the mark. His pants literally fell off when he saw the IA's reaction and realised what he was up against but it was too late by then. Gen Kayani the erstwhile GOC Pak X Corps himself admitted that Indian artillery shelling was so intense it could be safely said that it was the biggest fire assault after WW2!!

Secondly, Mush's hands were tied as he could not use artillery or the PAF for support as he had told the world that it were the 'Kashmiri freedom fighters' who had occupied the peaks and Pak had nothing to do with it. He failed to appreciate that this lie would come a cropper sooner than later as a result of which he could be defeated in detail which is what happened.

Thirdly, though he had set up a logistics base at Muntho Dhalo to support Operation Badr, he failed to appreciate how his troops could be supported if it was destroyed. And that's what happened when IAF Mirages destroyed the logistics base killing hundreds of Pak troops and jihadis (being used as porters). Paki troops later fell short of ammo, food, water, spares etc and had no alternative but to withdraw or face death by starvation and a complete rout. Mush failed to visualise this scenario and made no alternative plans for such a contingency.

His grandiose plan included the capture of Siachen in Phase 2 as well!! Biting off more than he could chew! In fact one of the gang of four generals who planned Kargil did mention that Siachen would soon be theirs as the 'Indian banya army can't fight'!! Perhaps Mush, the SSG commando who has less brain cells than a gopher did have the delusion that 1 X Paki soldier = 10 X Indian soldiers and therefore capturing the Kashmir Valley and Siachen would be a cinch.Unfortunately for them, it was the other way around!!

With just so many brain cells, Mush was unable to look beyond the tactical nature of Op Badr and thus failed to comprehend the adverse strategic and geopolitical implications of his misadventure.

Mush says Kargil would have been a huge success had not Nawaz asked the US to order the withdrawal of Pak forces from Kargil!! Really? This idiot who lies through his teeth at the drop of a hat, had failed on all counts. His planning was flawed both at the tactical as well as the strategic level and thus made to eat humble pie. But that's nothing new for a Paki SSG commando!!
Last edited: May 25, 2018

Paki SSG has very bad record against India.
In 1965 they were captured by Indian farmers

we are not talking about army, or paramilitary or police, civilians captured them.
In 1971, 1/3 strength of SSG, just give up arms and surrendered to Indian army.
1999 SSG, which occupied with NLI. Finally they had to withdrawn from kargil, they were finished off by our guns, when they were going back to their side.

This shows that creame of the cream of PA, which is SSG is over rated force.

sayareakd said:
Paki SSG has very bad record against India.
In 1965 they were captured by Indian farmers

we are not talking about army, or paramilitary or police, civilians captured them.
In 1971, 1/3 strength of SSG, just give up arms and surrendered to Indian army.
1999 SSG, which occupied with NLI. Finally they had to withdrawn from kargil, they were finished off by our guns, when they were going back to their side.

This shows that creame of the cream of PA, which is SSG is over rated force.
Click to expand...

You forgot about the pasting received by a shameless Brig Mush, then commander of the SSG brigade, who tried his damnedest to capture the Saltoro Ridge West of the Siachen Glacier three times with his useless SSG commandos with the help of massive arty support etc but got a bloody nose each time by Indian infantry! Lol!

These buggers are as incompetent as they come! No one will touch them even with a barge pole at a rummage sale!!